The Myth Of The Mavs' Improved Defense

Share All sharing options for: The Myth Of The Mavs' Improved Defense

I don't know what was more disturbing this morning, seeing the Dallas Morning News' Eddie Sefko use the phrase "getting in the opposing player's grill" or his overall point that the Mavs defense is improving. Wes nailed the truth earlier on this very blog: The Mavs defense has been incredibly inconsistent all year. In fact, compared to the rest of the league, it's actually gotten worse.

For most of the season the Mavs' defensive efficiency has been on the lower end of the top ten in the league, roughly 8-10. Certainly not bad, but not nearly as good as it has been over the past two years. However, despite what both coach Rick Carlisle and Sefko say, the Mavs defense has recently dropped to 12th in the league. Of course, too much can be made of league rankings, and that's the case here. A look at the season long trend shows that the quality of the Mavs' defense is basically unchanged.

Here's a graph of the game-by-game efficiency of the Mavs on defense: 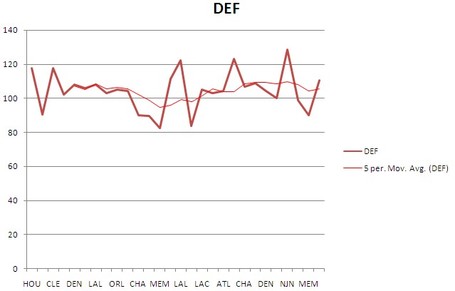 A quick glance shows us that the Mavs best defensive stretch actually occurred over the middle part of the season played so far. The graph also supports Wes' contention of inconsistency.

We don't see a a steady trend down (which would show improvement) or a steady trend up (which would indicate decline). We see a jagged sawtooth, which indicates real swings in performance. The smaller red line is a five game moving average which smooths out some of the noise you see by individual games. So, for example, the horrible defensive game against the Lakers doesn't look quite as bad as it is surrounded by four other strong defensive games.

There are a few important things to take from this data. One of them is that the Mavs can certainly play at a high level defensively for sustained periods. The dip in the middle of the graph shows that. Another is that the Mavs weren't been able to build on that stretch and reverted back to their average defense of early in the season. This is certainly not a good sign, especially when the decline in defense coincided with the return of one of their better defensive players in Josh Howard. Of course, another thing to take away from the data is that the Mavs defense usually isn't great or even very good. It can be, but more often than not it's only above average. Sadly, there simply is no trend to be seen for long-term improvement on defense.

The only glimmer of hope that we see is the trend after the Charlotte game. The trend since then has been one of improvement defensively for the Mavs, as you can see in the average heading down. Although there are some glaring exceptions (New Jersey anyone?). The graph doesn't include the game against the Clippers, which was one of their best defensive games of the season. So the short term trend actually is at least a little positive.

Unfortunately, the Mavs have so far shown little ability to build off of defensive momentum. If they are able to do this, then they will be in good shape heading into the second half of the season, because--unlike on defense--the offense has trended positively over the course of the season. But that's the topic for another column.