Share All sharing options for: Biggest Comeback in Mavs History: Notes and Quotes 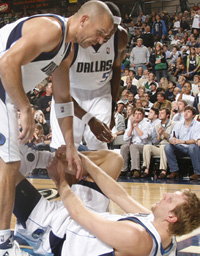 - Talk about timing.  Jake and I point out the Mavs inconsistent defense, and then Dallas goes schizo in the same game. Minnesota shot 61% in the first half.  Yes, some of that was great shooting, but at one point through the 2nd quarter they had a 26-2 advantage in points in the paint.  That's all on the defense, or a complete lack of it actually...  The second half was a completely different story.  Minnesota only scored 30 points in the final 22 minutes.

- It had to be fun for Mavs assistant Dwayne Casey to beat his former employer in spectacular fashion.  Canis Hoopus points out an ironic quote from Kevin McHale on Casey's dismissal, "The ups and downs, we just couldn't find any consistency."

- Could Carlisle's ejection have been done any more purposefully?

- After games like this, the sadistic side of me likes to take pleasure in opposing fans sorrow.  Here are some Timberwolves fans comments from the game:

In theory, this should be a very painful loss, but watching Dwayne Casey completely out coach Kevin McHale has been absolutely fantastic. How bout that third quarter!

I'm wondering what Casey told them at half, "let's whip on my old boss"?

He probably said... "Hey Josh Howard, this guy picked Ndudi Ebi over you. How do you feel about this?"

- Since November 15th, Dallas has the sixth best record in the NBA.

- When I watch a game and a great play happens I make a stupid face where my eyes get really big.  That happened a lot in the second half tonight --  far more than usually happens in an entire game.  Off the top of my head..., Gana's dunk, Josh Howard's ridiculous scoop layup thing to beat the shot clock, Dampier's offensive rebound followed by an infamous Kidd 2 pointer to tie it, Dirk's drive and dunk to give Dallas the 93-91 lead, all of Kidd's amazing long distance assists on the break, and seeing a game that saw Dallas trail 70-41 end with Jason Terry literally bowing to the crowd.  Awesome.

Postgame Quotes after the jump...

I'm exhausted and I just watched this game. I can only imagine what it must have been like to play in it.

Well, fortunately we don't have another one tomorrow. We get to rest and enjoy the new year. I thought it was a team effort. We were down big in the first but guys didn't quit. We kept fighting and we were hoping that with Minnesota being young we could hopefully use our experience to get back into it.

The biggest comeback in Mavs history, where does it rank in your career?
Umm , it's up there. It just shows that there are two halves and we played terrible in that first one. Then we played like the Mavericks in that second half. That's something we can build on going into '09.

When you look at how hard you had to play in that second half, you probably had to play more minutes especially with JJ out. Were you wondering how you were going to hold up?
I told coach I could go the whole second half if he needed me too. They found me a little break, but I wanted to get back in there. Everyone wanted to play and that is something that when you're down you want to see who is on board and everyone was. JET, J-Ho made big shots, Dirk played great, Damp, Gana... We got it from everybody. That's what we need if we are going to be one of the best teams in the league.

Coach watched most of this one from his office. Did that inspire you, fire you guys up at all?
We didn't know if coach just wanted to celebrate 2009 a little early, or if he just didn't want to see that basketball we were playing live and in person. I think for us being a veteran ball club we saw what we had to do. We had to regroup and that's what we did at halftime. Guys came out and played great in the second half.

Minnesota is an improving team obviously. They played great in the first half, and we didn't guard them well or shoot well. It was a bad combination. There were a couple of plays there where I thought Dirk was getting hit and there should have been fouls called. So I took the referee to task and got thrown out. Frankly, I was tired of watching it anyway -- the way it was going.

At halftime they were shooting 61 and we were shooting 30 something percent. It was just a matter of digging in. Second half didn't get off to a great start, but behind Jason Kidd, and Jason Terry, and Dirk it was an amazing comeback. I'm happy for the players and I'm happy for Casey. These thing happen in a weird way when you meet up with a former team. Not that it's that big of a deal, but fate works in weird ways. He and Terry did a great job of managing the team and finding some things that were working offensively and keeping the guys together. My hats off to them and the rest of the staff.

I'm exhausted and I just watched this game. I can only imagine what it must have been like to play in it.
Oh yeah, we couldn't sit down. In the first half we were a little down in the beginning but once we got it going we couldn't stop.

You came and igave some energy minutes, spelled some guys. Everyone did their part tonight.
Oh yeah, it doesn't matter how many minutes we play. Everyone did a great job today -- from the bottom to the top.

What was it like when coach Carlisle got ejected? Did you sense it firing up the team?
Yeah, I mean it lets you know that if Coach is going to step up like that and get ejected then we have to win this game. There is no choice.

What was it like at halftime?
We were down but we weren't out. We already knew.

Talk about the play of Jason Kidd tonight.
Finished the game with sixteen assists. I mean he was everywhere. The passes that he makes, the finishing. That was like one of the best games I've ever been involved in.

What does a comeback like this do for the confidence, and how will you be able to draw on this?
We're on our way up. Beginning of the season we were down, but it's about to get fun. Real fun.

Largest comeback in Mavs history. You helped spur it with 29. It had to be so much fun out there.
So much fun. All the glory goes to God though, he gave us the strength and the energy. I thought the fans though, the fans propelled us to this victory. We didn't want to let them down going into '09. We could have easily blamed it on a west coast trip, lethargy or whatever, but we found the energy. Coach got ejected so you know that gave us a little spark. We came back out after half and played defense. That was the difference tonight.

Tell us about your mindset coming off the bench.
It's all about doing your job. We talked about that in training camp. Each individual has to do their job within a team concept and do it consistently on a night in and night out basis. That's what has taken my game to another level.

You said it was all about the defense and we were able to see that.
Yeah, we're in the top five in transition points, but you can't get that done unless you get stops on the defensive end. Look at the job Dampier did on Al Jefferson tonight. He said, "We don't need a double team. I can cover him one-on-one." That was tremendous.

Talk about Jason Kidd...
I've got to tell you, this guy has added four or five years onto my career. I don't have to work (laughter). Any time you are out there on the floor you just have to stay alert. If you get out and run the lanes he is going to make your job easy on you.

Talk about the fans. They were down just like you guys, but at the end of the game you were running off the court high fiving them.
Yeah, because we fed off the energy of the crowd. They are a young team, so we knew that if we could just get an 8-0 or 10-0 run they could lose confidence. We let them get confidence early, and they got off to a great start. But give credit to us, we dug deep and it worked out.

You guys had to remind them who you were.
Yeah, big brother showed up big in the second half. I think we just have to continue to work. Defensively is where this team has a large room to improve. If we can continue to do that in '09 the sky is the limit.