- The previous four games against below .500 teams were not an illusion.  Dallas is playing really badly (understatement). 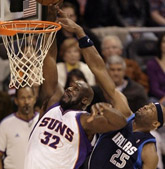 - Did you guys know that Steve Nash and Dirk Nowitzki are friends!  It only took 2 minutes before Nancy Leiberman reminded us...

- Here is where +/- falls apart.  In the first half, Shaq was dominant with 19 points and 8 rebounds. Dampier had 4 points, 3 rebounds, 3 fouls, and had been completely pushed around by Shaq.  Yet Shaq was +0, and Dampier was a +5.

- In the first half, it was actually a good thing that Dallas was a 3 point shooting team.  They made 7 of 11 and it was the reason they trailed by only 6 despite allowing Phoenix to shoot 58%.  They were just 2 of 9 in the second half -- not that it mattered.

- Blame the Mavs postgame show!  After the win over the Knicks, they displayed a graphic that Dallas held the longest active streak in the NBA of holding teams to below 50% from the field. It was something like 37 games, dating back to last season.  I kind of laughed when I saw it  -- thinking that holding a team under 50% isn't really something to hang your hat on.  That streak was blown to smithereens tonight as the Suns didn't just shoot over 50%, but shot 62.7%.  Insanity!

- It comes as no surprise that this was the Mavs worst defensive game of the season -- allowing 138 points per 100 possessions.  It makes the Devin Harris revenge game (125 points per 100 poss) look tame, and I thought that loss wouldn't be topped.

- Phoenix finished the third quarter 30-14 after Howard left with a sprained left wrist.  And that was totally over the back on that play right?

- I demand that Louis Amundson now be known as 'Mike Miller's Sister'. (credit to ptrck)

- About midway through the third quarter the game thread became infinitely more entertaining than the game, so I've got nothing else.

The third quarter was a demolition.  They played great.  There are some nights where we get a little outquicked out there.  We got outworked tonight.  It seemed like they got every loose ball.  They fought hard, and we didn't fight hard enough -- simple as that.

I don't have any specific information for you.  It's extremely sore.  He wasn't able to comeback, so we'll see how he feels tomorrow.

You guys have been good at winning close games lately, but when you go down go down hard.  Is there any rhyme or reason to that?

Well, I'm not going to write this up to a schedule loss or anything like that.  When they came into our place they were coming off a back-to-back and we were waiting on them.  These are ones you've got be able to deal with.  The number of loose balls, and the points in the paint disparity was too much to overcome. And Shaq had a dominat game on the inside.  And they played great, really, at every position.

No.  And a 50 point disparity is unheard of.  If you give up 63% shooting from the field you are never going to win a game -- certainly not in the West on the road.