Share All sharing options for: Diop Traded for Matt Carroll and Ryan Hollins 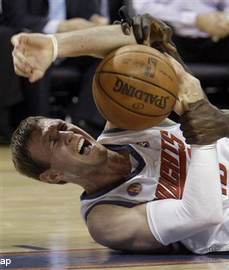 Dallas has finally made a deal and January 16th etched itself into the Dallas history books. From now until the end of the time, it will be remembered as the day Dallas traded that one backup center to Charlotte for those two other guys. Although I suppose in ten years there might be someone out there who will be able to tell you the actual trade was DeSagana Diop for Matt Carroll and Ryan Hollins, but it will be the same guy who can tell you the Mavs took Jay Bilas with the 108th pick of the 1986 draft.

Needless to say this isn't one of the more exciting trades in recent memory. Diop to Charlotte rumors had been popping up for a large part of the season and the most recent incarnation had Diop ending up in Charlotte and Raymond Felton returning to Dallas. To get an idea on how much more interesting that idea was, Felton averages four more ppg than the three players in this deal combined. As a result, this trade was rather anticlimactic.

On the surface, it's hard to argue one way or the other that either Dallas or Charlotte improved their team immediately. Carroll is a shooter who is having the worst shooting year of his career (26.7% from 3). Hollins immediately takes Diop role as the guy to get limited minutes behind Dampier. And Diop has left Dallas before finishing a single year of his recently signed full MLE -- which is what the trade really comes down to.

This deal saves Dallas money. It's a wash this season, but as Diop's contract continues to increase until 2013 Carroll's will steadily decrease. By the final year Carroll will be making nearly four million less than Diop. That aspect makes this trade stand on its own, but one can't help but wonder if this is a precusror to something larger.