Share All sharing options for: Mavs Get 20th Win: Notes and Quotes 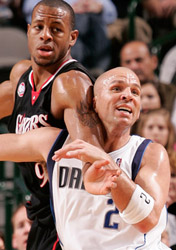 - Carlisle has said all season that everyone's time will come.  Tonight was Gerald Green's -- he played the final two seconds of the 1st quarter.  In those two seconds he watched PHI make a free throw and Dampier turn it over on a 50 foot inbounds pass.  Green did not see the court again until there were nine seconds remaining.  I'm trying to figure out what Green's role was supposed to be in those two seconds.   Perhaps it's a sign that Green's turn in the ever-changing bench rotation is coming as Singleton was a DNP.

- Dallas missed all five of their 3PA's in the first quarter, but Barea started off the 2nd by making two in a row.

- Dirk's four steals were the most he has had in regular season game since the 05/06 season.

- Mark Followill was clearly spoiled by the great comeback.  Anticipating the same second half domination, he said "the onslaught is on" after an 8-4 start to the 4th quarter.  The score was 74-70 and one minute later the game was tied.

- With a minute and thirty seconds left in the game, the entire Mavs coaching staff was up directing the defense.  When the possession turned into Igoudala trying to go one-on-one against Kidd they stopped and watched.  Igoudala ended up missing a well defended jump shot with Kidd's entire hand an inch away from his face.  Great defense all night by Kidd.  And Bob Ortegel said nobody would write about it...

- The TV crew pointed out  that coming into tonight's game Jason Terry was 2nd in the NBA in 4th quarter points.  He added six more to his total tonight, all in the final five minutes as Dallas came out of a timeout and decided to finish Philly off with the Dirk/Terry two-man game.  It worked.  In the three minutes after the timeout, Dirk and Terry scored the teams next 13 points and did not miss -- the lead increased from 2 to 9, and the game was pretty much over.

You had another great start tonight.  Really established the tone both offensively and defensively.

Well the ball isn't going to go in the basket every time.  It wasn't a great shooting night for us so there were a lot of rebounds I could get my hands on and just try and go up around the basket.  If I didn't have the shot, I just kicked it out and we ran other plays.  We got it together, played great defense, and were able to get a win.

Was there any hangover from the comeback win?

I guess if you look at the last two or three games it seems like we are playing from behind.  We don't want to play like that.  We want to come out and be ready from the beginning of the game.  We are going to play some good team who are going to come out and really play so we don't want to be behind 20 points every game.  We've just got to come out with the mentality, play the defense we can play, and get off to a good start.

Is has to be reassuring that when you aren't shooting well the defense can keep you in it.

It doesn't matter, the defense has to be there every night.  We know all the shots aren't going to go in every night, but as long as we continue on the defensive end we are going to get stops and rebounds and basically get the ball in the basket.

Do you feel like  you are starting to establish homecourt?

If we can string together 14 or 15 wins that would be great.  It is definitely tight in the West, so if a team loses two they could fall out of the 8th spot.  We still have a long way to go at this point.  We really aren't worried about the playoffs.  When it comes down to the last 10 or 15 game we'll take a look and see how it goes then.

He [Jason Terry] was great in the second half -- just tremendous.  At halftime we were making a great effort defensively, but we just weren't making shots. We just talked about 'hey we've got to wipe the slate clean from an offensive stand point, forget about what just happened, keep fighting defensively, and we're just going to have to find a way to win'.  JT came in, he hit two quick threes and then another one.  That got the crowd into it, and I thought it was a good crowd too. Can't say enough about him and Kidd.  Kidd's defense tonight on Igoudala was just tremendous.  I thought George did a very good job on Igoudala to start the game.  As it went along, Dirk was able to get it going offensively.  It was one of our better defensive efforts in a while.  You have to be really precise against these guys because they are so quick and they are so good at making plays at two or three positions on the court.

Was it good news/bad news that you struggle to get off to a good start but are closing out games?

Well we were up 10 in the first quarter then we lost the lead.  I liked the way we started the game the first six or seven minutes, or seven or eight minutes actually.  We just didn't end the first quarter well and had to fight back.  That's just the way it was going.  We were not shooting well then either, though I think we got off to a decent start shooting the ball.

How much confidence does the team have now knowing they can close out games?

I don't think there has ever been a lack of confidence.  There was a lack of execution.  There was a period where stylistically we were off-kilter.  That's light years ago.  I don't even remember what happened yesterday to tell you the truth.  We've just got to go forward.  If you look at the standings it's ridiculous how close it is.  If you lose a game you could go from fourth to seventh.  It's a great win and now we've got to get ready for the next one.

With main offensive players being veterans, do you not worry about that and assume it will come?

Well the question at halftime that I asked the staff was, "can we get better shots?"  We felt we were getting some good looks at jump shots but wanted to attack the basket a little more. Categorically we are more of a jump shooting team then a power team. A lot of it depends on our defense.  When we are generating stops we can make things happen in the open floor.  When we've freelanced we've developed a good feel for one another.  But when we get into execution and stuff then we have to be precise.  A lot of it is going to be Dirk and JET.  Kidd's going to have the ball a lot.  Josh Howard is going to be a first or second option.  We've got to make plays, we've got to make shots.  But it can't all be jump shots.  Down the stretch we got in the bonus which was great, and I thought that gave us a buffer to finish the game off.

It looked like it was a goal in the third quarter to attack the basket.

We shot a lot of open jump shots in the first half that weren't going in.  My job when I go in is to just be aggressive, attack the paint, and create for others or for myself.

We've got playmakers, more guys to attack.  Then you have Dirk and Bass who make jumpshots -- spread the court so it's easier for us to get in the paint.

How is the shoulder?

Me and the trainers did a good job getting it stronger.  It felt pretty good today so I just want to keep it that way.

How about the defensive effort?

Oh yeah, we did great as a team.  I thought J-Kidd did well on Igoudala, Devean George, Dampier did good, Gana came in and blocked shots.  I thought we did good.  That's how we kept it close in the first half.

At the start of the game the shots were tough.

Yeah, tough shots.  We weren't really attacking the paint.  And we weren't really running on the fast break like we like to do.  I think we did a good job with that in the second half.

Jason Kidd did so well on Igoudala.  Do you guys feed off of that?

Oh yeah, it feeds energy to everybody. You see your best player, your hall of famer, working that hard. Everyone on the bench is looking at it.  It's good for us.

What do you guys think when you see the standings in the West?

We take it one game at a time.  Every game is important so it's like every game is a playoff game.  That's the way we are looking at it right now.

How does the team feel right now?

It feels pretty good.  Coach has done a tremendous job putting us together.  I think we are getting better.  Instead of going down or staying the same we are moving up.

It wasn't pretty on offense but defensively you guys made up for it.

Yeah, on the defensive end guys stepped up, stayed with it.  Offensively Dirk and JET found their groove which was able to push over the top.

It seemed like they were able to control the tempo in the first half but you guys were able to push it more.  Was that a result of stops on defense?

Yeah, I would say so.  And getting the crowd behind us.  Guys just kept their effort at the top and finished the game off.

You feel like you guys are starting to develop some homecourt swagger?

Yeah, I think so.   The game we played before this one was a Tuesday game so you know we had to work the fans in as much as we could.  But for the most part they've been behind us all season and in past years.  We're gonna need them.

Was there any hangover from that comeback?

Well, guys are going to be tired, but it's an NBA game and NBA players are used to this.  We turned the page and were able to fight through it.  Now we've got to get ready for Memphis.