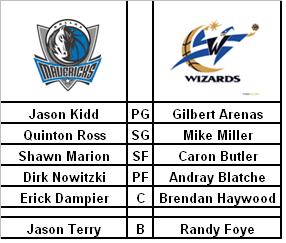 Tonight at the AAC marks the beginning of the 2009-10 Dallas Mavericks season, is this the year the Mavericks put it all together and bring a title to Dallas?

Follow me after the jump as we preview game 1 of the season...

Jason Kidd has his work cut out for him tonight Agent Zero can put the ball in the basket from anywhere on the floor. Kidd must make him work on both ends of the floor tonight. These two are at complete opposite ends of the spectrum as pertains to skill set. Kidd must find a way to slow down the much quicker Arenas, at the same time Kidd has the opportunity to make Arenas pay for his lack of defensive prowess. Edge: Wizards

Mike Miller is a jump shooting machine that should flourish in Washington alongside Arenas and Jamison. Tonight however is not going to be his night, the young energetic defensive stopper, Quinton Ross should make things very difficult on Mr. Miller. I am sure that Q will get his fair share of opportunities against Arenas, and Randy Foye throughout the night. Edge: Mavs

This may be the match up of the night; Butler comes straight from the Marion mold. These two are almost mirror images of each other (statistically speaking) both play with a lot of energy and explosiveness on both ends. Edge: Mavs (but only slightly)

This is a strange match up solely because when these guys really want to play both of them can do some very good things. The problem is you never know when they are going to show up. Both players have the ability to play solid defense and change some shots, but they have to do it with hustle. Edge: Even

Randy Foye is a solid young player with quite a bit of upside and has the size to cause some problems for the Mavs and Jason Terry. The great equalizer however is the shooting prowess of Jet, if he can get off to a good start the youngster will fold.

The Mavericks will have to begin the season without Josh Howard and with an early trip to L.A. coming on Friday this will be a good way to get rid of those first game jitters.