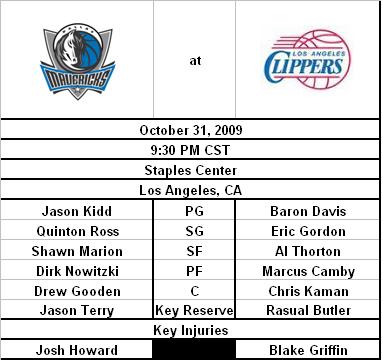 Well people I never thought I would be writing the preview for this game after a win against the mighty Lakers. Last night the Mavs came out firing on all cylinders and took down the reigning world champs with relative ease. The Mavs team that showed up last night was the one that everyone anticipated seeing in the season opener. Can they make it two in a row tonight at Staples again? Well let's just hope the Mavs have not taken on the characteristic of their other Dallas major sports team.

Kidd: Last night Jason was very active on the defensive end and facilitated the offense like only he can. Tonight however is another tough test against a bigger stronger Western Conference point guard. Jason must continue to be active on the defensive end and force Baron into some bad shots. If Kidd can just keep Baron from exploding then the Mavs should have a lot of success.

Davis: Baron has been in a bit of a funk to start the season as he is only shooting 35% from the field and a miserable 27% from beyond the arc, this will not last, so keep an eye on him. Baron will play solid hard nosed defense on Kidd, and the Clippers will try to get the ball out of Kidd's hands early and force the Mavs offense to slow down. EDGE: Mavs

Ross: Mr. Q draws another tough assignment tonight, but a much more manageable assignment. Eric Gordon has been lighting it up this year, but his frame and skills are much more conducive to Ross being able to handle than the Mamba was last night. Look for Ross and the Mavs to try to Gordon off his game early and force Davis to have to shoulder the load.

Gordon: Gordon has come out of the blocks with guns blazing this year, and while it is hard to imagine an 0 - 3 team being worse, if not for the play of Gordon the Clippers would be down right awful. Gordon has begun the year shooting 50% from the field and 47% from beyond the arc, while averaging almost 20 per. The downfall to Gordon's game right now though is he is falling in love with the 3 point shot, he has shot one fewer than he has free throws. Perimeter defense will be key tonight. EDGE: Clippers

Marion: Shawn continues to get his legs back and last nights play was a very good sign of things to come. He was simply outstanding on both ends of the floor last night. Tonight will be a better test for his conditioning, this is definitely something to pay attention to. Shawn should be able to have his way with Thorton tonight, look for the Mavs to try and exploit this match up.

Thorton: Al is off to a slow start this year averaging less than 10 per, and now has been seeing his playing time decrease. Expect to see a lot of Rasual Butler until Thorton gets things going. Edge: Mavs

Nowitzki: Dirk had another solid game last night, but he continues to struggle with his shot. As always though Dirk continues to work very hard and at anytime will have one of those break out shooting nights. Dirk's defense on Odom last night was wonderful, other effort like that against Camby tonight will be needed.

Camby: Marcus is going to do his damage down in the post but can also knock down that mid range jumper. He has the ability to cause Dirk some grief on the defensive end. He is an exceptional week side defender so look for the Clippers to do a lot of late doubles on Dirk and Marion, using Camby's athletic ability and quickness. Edge Mavs

Dampier: Damp turned in a very good effort against the much more talented Bynum last night, this however causes me some concern. Erick has been known for showing up against the big names and being non existent against the rest. Maybe the addition of Gooden and Carlisle naming him the starter before camp ever started though has lit a fire with Damp.

Kaman: Chris has been the Clippers number 1 option down low so far this year and with his ability to step out and hit that 15 jumper, he will be a point of emphasis for the Mavs bigs tonight. While he himself does not get a lot of shot blocks Marcus Camby gets a lot of his by coming over to help Kaman late. Chris will nab some rebounds but he is not a very good offensive re-bounder so this is an area where the Mavs can do some damage. Edge: Clippers

Prediction: This has all the variables of being a let down game for the Mavs, but I think last nights win has given this team a big boost of confidence.