Share All sharing options for: Mavericks Vs Rockets: Game 7 Preview 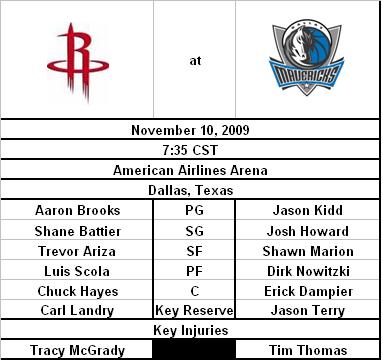 For tonight's game preview, I decided to change things up a little bit. So yesterday I got with Lee Grammier and the guys over at The Dream Shake to exchange thoughts on tonight's match ups.

We decided to do a joint game preview, I hope you enjoy what we got put together for you, and make sure you head over to their site and leave them a comment. Keep it clean though, and by all means let them know why the Rockets will lose tonight.

The Dream Shake - Brooks will destroy Kidd.  It's the worst possible matchup for the aged former superstar.  His speed will kill, quite possibly finally blowing up Kidd's knees.

Mavs Moneyball - With Yao and Tracy gone Brooks role as an offensive weapon has increased, and he is making the best of his opportunity. Brooks is averaging 18 points and 8 assists per contest, but it is his speed and quickness that is his deadliest weapon. Look for Brooks to try and penetrate the lane at every opportunity, and then get the ball out to a shooter.

Mavs Moneyball - Hopefully Jason drinks a few energy drinks before tonight's game because he will need all the energy he can muster. Jason needs to be very physical with Brooks tonight. Look for the Mavs to get Kidd involved early by posting up the much smaller Brooks. Kidd must try to negate the speed of Brooks and force the Rockets to double.

The Dream Shake - Kidd turned it around again last season, but has dropped off his scoring yet again.  He's doing what the Mavs need of him, so no real knock there.  Unless, of course, you remember what they are paying him.

Mavs Moneyball - Even: This should be a very good match up, complete opposite skill sets, size, and speed. Brooks the young, quick, and speedy youngster versus Kidd the bigger, stronger, and experienced veteran.

The Dream Shake - Rockets:  Brooks is just better at this point in Kidd's career at every phase of the game

The Dream Shake - Sometimes when a player flies under the radar for too long, a lot of ambassadors of good will for them will pile up and then that underrated player will become overrated.  No such thing will ever happen to Battier, he's finally getting his due, and he's earned every bit of it.  (Though Phillip is right, Duke does suck)

Mavs Moneyball - Glad to see Josh back, not glad to see Josh's jump shot has not gotten any better. As long as Josh keeps going strong to the basket however the jump shot is not a concern.

The Dream Shake - I used to be a huge fan of this once up and coming sure thing.  Then an odd thing happened.  Howard stopped improving, and his shot seemed to get worse.  Then, he opened his mouth and repeatedly put his foot in it.  He's still a better than average player with insane athletic skills.  Something tells me that in 3-4 years, after he has a contract issue with how much he's getting paid, it will all click for him.  For now, he's good, but Shane has tricked him into shooting too much on many occasions.

The Dream Shake - Even:  Sorry Mavs fans, you have to do more than score.

The Dream Shake - Ariza got his shooting back on track against OKC, and I have to say, he's been better than I even hoped, which is even more than I thought was possible.  He can't "create his own shot" in a traditional way, but he doesn't need to do that.  In fact, that's why he's such a great fit in the traditional Adelman system.  He is incredible on moving without the ball, thus creating the shot with a pass from Brooks.

Mavs Moneyball - The Rockets have been leaning heavily on Ariza to be a scorer, and so far he has done a pretty good job at it. He comes in averaging 20, 4, and 4. Ariza known for his defensive prowess has now seemed to have added a solid offensive game to go along.

Mavs Moneyball - I really like the hustle and defensive skills that Marion brings to the Mavs. There is a trend that has been going with Shawn though that is disturbing, and that is his lack of trips to the line. In 6 games he has managed a mere 11 FTA, this must change.

The Dream Shake - Really the perfect pick up for the Mavericks.  He fits needs all over the place for them.  I've long been a fan; Anyone that can shoot a shot that ugly and have it go in as consistently as Marion does is great in my book.

Mavs Moneyball - Mavs: The Mavs have the edge in this match up but by the smallest of margins.

The Dream Shake - Mavs:  Ariza could shut Marion down this game, but shear one player vs. the other, Marion is better.

The Dream Shake - Scola is slowly ticking his numbers back up.  I know that every preview I say he's finding his way in the new offense, but that's exactly what's happening.  By the end of November I fully expect him to be averaging 17 and 10.  And it's absolutely possible for him to get to 20 and 10.

Mavs Moneyball - What the hell were the Spurs thinking?

Mavs Moneyball - While Scola is a very nice player, he is NOT Dirk, and tonight he gets to prove that point once again.

The Dream Shake - Mavs Moneyball is correct, he's not Dirk.  And while Rockets fans don't like Dirk (though he seems like a good guy and the only reason for it is that he plays for Dallas) I do like him.  He's even averaging a career high in points, while not far off from his career high in rebounds.  He's good, really, really good.

Mavs Moneyball - Mavs: Do I really need to tell you why?

The Dream Shake - Mavs:  No, you don't need to tell why

The Dream Shake - I'll answer the question below:  He does it with his low center of gravity, terrific strength and intense study and practice sessions.  Chuck Hayes has always played this well defensively.  The difference for him is offensively.  And all it took was time for Chuck to focus on moves he was never asked to focus on.  He's being put in the right situation by Rockets passers and he's capitalizing.

Mavs Moneyball - Who? How does a midget play center in the NBA as well as Hayes has so far this season? He cannot play this well forever, right?

Mavs Moneyball - Yes that's right the self proclaimed "Best Center in the West" has now played well in every game so far this season. I am still waiting however for the night he decides to not show up.

Mavs Moneyball - Even: Hayes is a midget and Dampier is bound to not show up one night

Mavs Moneyball - Should be another classic Dallas vs Houston game, I suspect the Rockets will hang in there most of the game, only to have their hearts ripped from their chest by Jason Terry. The Jet owns the Rockets and that does not change tonight.

The Dream Shake - I agree on the Jason Terry part, he's always good for 50ish against the Rockets.  I hope that the Rockets have finally remembered that he exists.  Aside from that, the Rockets have to find a way to contain Dirk.  He's been on a tear so far this year, and I think this is the first season he really believes in the Mavs since they went to Finals.  That goes a long way to what the Mavs can do.  That said, it's early in the season, first place in the division is on the line and the Rockets play the game the right way.  Rockets by 1