Share All sharing options for: Mavericks Vs Spurs:Game 8 Preview 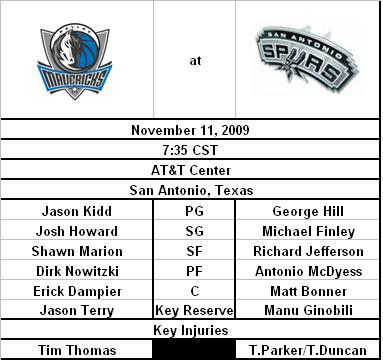 Jason Kidd: Everyone continues to make claims that Kidd simply cannot stand up against the young, quick point guards in the league, yet he continues to prove the naysayers wrong. Last night against the Rockets was no different. The Rockets Aaron Brooks was on fire in the first quarter, making acrobatic shot after acrobatic shot, but Kidd stayed steady and in the end it was the leadership and experience of Kidd that won out in the end.

Tony Parker George Hill: The Spurs 2008 first round draft choice should get his second consecutive start due to the ankle injury suffered by Tony Parker. Hill is a good shooting point guard, as he is shooting 46% from the field and 57% from beyond the arc. Make no mistake though he is not Tony Parker.

Josh Howard: Josh in his second game back had another solid scoring night, dropping in 14 points. Josh's ankle is still very tender and bothersome at times, this was very visible last night in the third quarter. Josh had to move very gingerly on it, and it is the ankle that is causing him difficulty getting the proper lift that he needs on his jump shot. Josh is going to be fine, the more he plays the better that tender ankle will get, and so will his jump shot.

Michael Finley: The first look at "Sir Bricks-A-Lot" of the year for the Mavs. Fin is going to make a few dazzling shots, but you can also count on several hideously ugly shots as well, and at least once he will dribble the ball off his feet. Finley's job these days is to simply stand behind the arc and then not to screw up when he gets the ball.

Edge: Mavericks. This match up is not even close, even with Howards bum ankle.

Shawn Marion: While Shawn did not have an extremely significant impact on the offensive end last night against the Rockets (10 points) it was his defense on Trevor Ariza that allowed the Mavericks to pull away from the Rockets. Once again though, his lack of trips to the free throw line is a major area of concern.

Richard Jefferson: Scoring wise Jefferson is off to his worst start since his sophomore season in the league. With the Spurs missing Duncan and Parker the bulk of the Spurs scoring will be left upon the shoulders of Jefferson and Ginobili tonight. Look for the Spurs to try to get Jefferson involved early and often.

Edge: Even. As good as Jefferson can be offensively the defensive prowess of Marion is that good as well.

Dirk Nowitzki: Dirk continues to struggle from the field, but he well makes up for it by getting to the line, and it is his energy that is keeping him and the team in games. Dirk has been somewhat quiet since his 29 point 4th quarter explosion, tonight could be the night that he flips the switch again.

Tim Duncan Antonio McDyess: While I have McDyess listed as the starter replacing Duncan do not be surprised if the rookie DeJuan Blair gets the nod. It is all going to depend on how Pop decides he wants to attack the Mavs. If he decides (and I think he will) to slow the pace down and turn the game into a half court beat and bang affair, the rookie will see a lot of action.

Edge: Mavericks. There are not many times the edge will not go to the Mavs as long as Dirk is here.

Erick Dampier: It is amazing what a contract year will do for a player's ability. Suddenly Dampier is playing like he did in his final year in Golden State.

Matt Bonner: This guy is just not good, never has been and never will be. How is it possible for a center in the NBA over a six year career to average only 3 rebounds a game?

Edge: Mavericks.  Not even close (did I just say, that the Mavs had the edge at center and it is not even close? I got to stop drinking so much)

Prediction: No Tim Duncan + No Tony Parker = No chance for the Spurs