Share All sharing options for: Mavericks Vs Bucks: Game 11 Preview 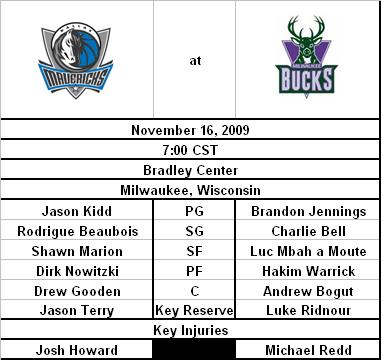 Jason Kidd: Kidd continues to be one of the most consistent players on the team, while this is not surprising it is definitely a plus. Kidd's consistency on the defensive end will be needed tonight, as Kidd's counterpart in Milwaukee went off for a rookie club record 55 point showing Saturday night.

Brandon Jennings: Jennings is not your average rookie, it appears there is no limit to this kids talent. He comes in averaging nearly 26 points per contest, and one must assume that with Michael Redd sidelined that his point totals would only increase. Keeping Jennings in check will be job one for the Mavs tonight.

Rodrigue Beaubois: Roddy B continues to impress, yesterday in Detroit the Mavs rookie dropped in 14 points and 4 assists and best of all ZERO turnovers. As long as he continues to put in performances like this one, the Mavs coaching staff is going to have a difficult time keeping him out of the line up.

Charlie Bell: As a starter there is not much good to say about Charlie Bell, and lets be honest if not for the injury to Michael Redd, Charlie Bell and his 9.9 per game Efficiency rating would not be getting extensive minutes.

Shawn Marion: Marion has yet to have a big scoring game for the Mavs, but his defense has been everything we could have hoped for. As soon as he stops missing those close to the basket shots things will turn around quickly. I would like to see him attack the basket a little more, if for no other reason than to get himself to the line more than once a game.

Luc Mbah a Moute: With a +/- of +6 and an efficiency of 7.6 per game, this guy by no means should be a starter in the NBA. The Bucks however continue to play well with 3 of their 5 starters being sub par backups.

Dirk Nowitzki: Dirk is well on his way towards another run at MVP, and he has done this while struggling from the field. I feel sorry for whomever he puts it all together against.

Hakim Warrick: The third of three Bucks starters who should not be starters, will have his hands full tonight, and nothing to suggest that the Mavericks cannot win this battle.

Drew Gooden: Where have you been all year? Finally against the Pistons, The guy the Mavericks thought they were getting in free agency this year made his first appearance. Gooden dropped in 11 points and 11 rebounds in his first start of the year, is this a sign of things to come? We can only hope so.

Andrew Bogut: As far as efficiency goes there are only two centers in the East better than Bogut (Dwight Howard, and David Lee). Bogut comes in averaging 16 points and 9.8 rebounds per contest, He and Brandon Jennings are the Bucks primary people, Gooden and the Mavs must keep Bogut quiet and force the Rookie to try to do it all by himself.

Prediction: This has all the makings of a let down game for the Mavs. The deciding factor to this game will be the play of each teams bench. The Mavs have the clear advantage as far as bench play, but there 2nd game of a back to back play has been very suspect.