Share All sharing options for: Mavericks Vs Spurs: Game 12 Preview 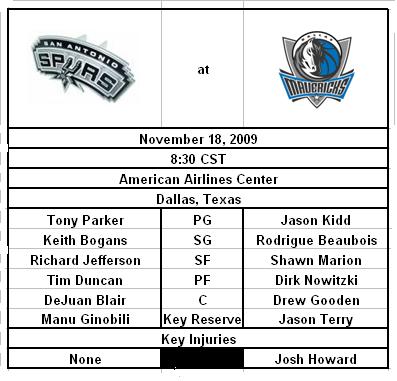 Jason Kidd: Kidd called the recent road trip "a character test" and claimed that the Mavericks "Passed". Well tonight begins the next test for Kidd and the Mavs. The last time in San Antonio Kidd was given the luxury of not having to defend Parker, but Parker is healthy again and Kidd better be ready.

Tony Parker: Tony made his return to the Spurs line up against Oklahoma City this past Saturday night, after being out with a sprained ankle. Parker looked good in his return with 17 points, 5 rebounds, and 5 assists. Since then the Spurs have been sitting waiting on tonight's match up.

Edge: Spurs (a fresh Parker against Kidd after a long road trip, this is not how I wanted the home stand to start)

Rodrigue Beaubois: Roddy B had a stellar road trip, and continues to open eyes around the NBA. Roddy could have really helped the Mavs in there last meeting against the Spurs, but someone decided not to play him, uh hmm...

Keith Bogans: The last time Bogans faced the Mavs he saw a lot of JJ Barea, and Bogans had a field day on both ends of the court. He only played 17 minutes in OKC but would be prepared to see quite a bit of him tonight.

Shawn Marion: Shawn is listed as day to day after suffering a sprained ankle in the first quarter of the game in Milwaukee on Monday night. I think he will play but I am not sure how effective he will be. We will likely see quite a bit of Kris Humphries and the Q

Richard Jefferson: Richard alone beat the Mavericks in the last meeting, but Jefferson was non existent in OKC on Saturday night. Apparently the Spurs and Jefferson are having a hard time getting on the same page when he is in the line up with Duncan and Parker. Jefferson played 35 minutes scoring 4 points, 4 rebounds, 4 assists. The Spurs will more than likely try to get Jefferson going quickly against an ailing Shawn Marion.

Tim Duncan: Duncan is stil  l a walking double double but his game has diminished, then factor in the soreness he is still feeling from the bad ankle and you got the makings of a big night from Dirk.

Drew Gooden: I never saw this coming, but Gooden has played really well as of late and he will be needed tonight. In his last game against the Bucks Drew went off for 22 points and 14 rebounds. Another performance tonight any where near his last would go a long way in bringing a victory to the home team.

DeJuan Blair: Who knows how long he can hold up physically, but so far he has been excellent for the Spurs. The Spurs continue to limit his minutes to around 18 but he makes the most of his minutes (7 ppg, 7 rpg) I would highly suggest for Gooden to wear a little extra padding tonight.

Prediction: This should be another great Spurs, Mavs match up. So sit back and enjoy it. Mavericks win a nail biter. Go Mavs!