Share All sharing options for: Mavericks Vs Kings: Game 13 Preview 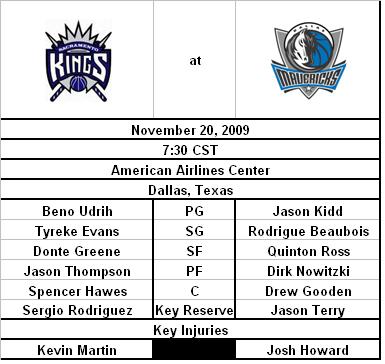 Jason Kidd: Jason is obviously one of the best PG to ever play the game, but when you think of J Kidd one most certainly thinks of his passing abilities first and foremost. This season however he has made his mark on this team with his defense. The Mavs defense is a full 8.6 points better with Kidd on the floor, and in the West that is no easy task. Tonight should be one of the easier match ups for Kidd on both ends of the floor. Look for a possible triple/double from J Kidd tonight.

Beno Udrih: Udrih is being asked to carry more of the scoring load for the Kings with K Mart being side lined. Beno is more of a jump shooter than penetrator; he comes in averaging 13 ppg, shooting 51% from the field and 43% from 3. He has good ball skills as he carries a 2:1 assists to turnover ratio; he has shown the ability to get to the basket, but his shot gets blocked at a 17% clip, without K Mart this percentage probably increases.

Rodrigue Beaubois: Continues to help get the Mavs off to a quick start in the 1st and 3rd quarters, and the feel of the team just seems to be more energized with him on the floor. His speed and quickness will be great assets for him tonight going against a much bigger defender. This may be the game that Beaubois gets increased time on the floor. Look for the Mavs to work the Kidd/Beaubois/Nowitzki 3 man game a lot tonight.

Tyreke Evans: The Kings #1 draft pick from Memphis has got his NBA career off to a good start. Evans comes in averaging 17.1ppg. The Kings will run a lot of screens and backside picks to get him the ball while moving to the basket. Evans is a good finisher and with his length (6'6") at the 2 spot, could cause the Mavs defense problems. While Evans does not shoot the 3 ball well (26%) he has a decent 15-18 ft. jumper, but it is his finishing ability that Kings are in love with.

Quinton Ross: Defense, Defense, Defense. I mean what else is there to say about The Q? Do not be surprised however if Kris Humphries does not get the nod due to the extreme height disadvantage the Mavs will be in.

Donte Greene: It appears as though the Kings coaching staff is becoming more, and more confident in Donte. Against Chicago on Tuesday Donte played his most minutes of the year and oh by the way led the team in scoring too. Donte will do most of his work inside the paint and his height could cause the Mavs problems.

Dirk Nowitzki: "He's not clutch", "He is too soft", "He is not a Leader" and those people that said these things are IDIOTS.

Does Not Matter Jason Thompson: Another in a long list of former #1 draft picks on this Sacramento squad with a solid future in the NBA, just not tonight.

Drew Gooden: Has been on an impressive run the last few games, averaging 17ppg and 10 rpg over his last 3 starts.

Spencer Hawes: You guessed it, another former #1 pick that makes the Kings a perfect 5 for 5 on former #1's starting tonight. Spencer may be the epitome of average, all it takes is one look at his +/- stat (+0.1) and that will tell you just about all you need to know about him, but an average center in the NBA can have a long career and make lots of money.