Share All sharing options for: Mavericks at Hornets: Game 5 Preview 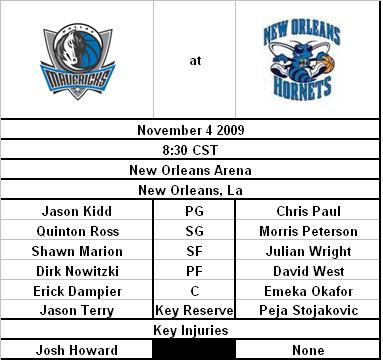 The Mavericks will roll into New Orleans Arena tonight still riding high from the emotional come from behind win over the Utah Jazz on Tuesday night. While the win over the Jazz was ugly for three quarters the last 8 minutes were simply amazing. Can the Mavs keep their 3 game winning streak going?

Kidd: Kidds defense has been exceptional even when his shot has not been falling and he will need that defensive effort again tonight against the best the league has to offer. Jason broke out a little last night scoring a season high 19 points, it was good to see the "old man" knock them down. Jason's work in the two man game with Dirk last night was fabulous need to see more of it tonight.

Paul: What else can you say about this guy? He is the best point guard in the league in all facets. Even on an off night he causes serious problems for opposing teams. Look for the Hornets to try and get him going early to force the Mavs into the early double allowing Okafor and West to get open looks. Edge: Hornets

Ross: Quinton suffered an injury early in last nights game and he did not return. If Quinton does not play tonight look for our old buddy Matt Carroll to get his first start of the season. Even if Ross starts it is probable that Carroll gets quite a few minutes tonight, due to his shooting ability and length.

Peterson: Morris is a big combo guard-forward. While he is not likely to pour in a bunch of points, he does a lot of the little things that coach Scott likes. However he is only averaging about 15 minutes per so expect to see a ton of Peja. Edge: Mavs

Marion: Shawn is continuing to grow on this team and looks to be a 15 and 8 guy. I would like to see Shawn (and the rest of the team for that matter) have more off the ball movement to allow Kidd to get him the ball in better scoring situations. Shawn continues to play excellent defense and is a key reason the Mavs are #2 in the league.

Wright: The 2007 first round selection from Kansas has not had much playing time in his short NBA career until now. He is a very talented player with a large upside, but he is young and this maybe the opportunity the Mavs have needed to get Marion going. Edge: Mavs

Nowitzki: I think he might have found his touch last night what do you think? 29 points in 8 minutes would suggest such a thing, and thank goodness he took the summer off because I am sure he is feeling the effects of the intense game last night. Dirk will be ready come 8:30 tonight though and more than his offense his defense will be very much needed tonight against David West.

West: Other than Dirk one of my favorite forwards in the league right now, teamed with Paul he can be down right deadly. Dirk will have his hands full with West tonight should be a great battle. Edge: Mavs

Dampier: As much as we all have gotten on Erick over the years I must say that when the guy wants to play he can be... well good. Erick has been that way all year so far and let's hope it continues tonight in New Orleans.

Okafor: Okafor was all alone in Charlotte but now in New Orleans he is surrounded by a qaulity team, this could spell trouble for the rest of the league once he and Paul get on the same page. In the Hornets last game against the Knicks it appeared that the two got a little closer, as Okafor poured in 24 points on 69% shooting. The Mavs must keep him under wraps. Edge: Hornets

Prediction: The second game of these back to backs is always tough but even tougher the night after having to expend as much energy as they did last night. However I think the Mavs are just too strong for these Hornets right now. Look for Marion to get some good looks tonight to ease the work load on Dirk.

Sorry for missing the preview last night, I will try to do better. GO MAVS