Share All sharing options for: Mavericks Vs Raptors: Game 6 Preview 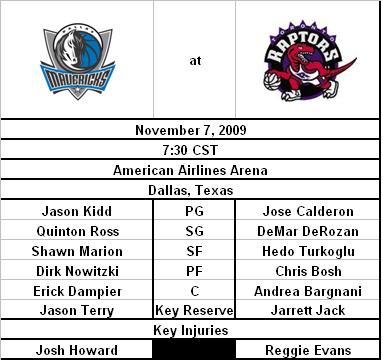 Is this the game that the Mavs finally start to get their shooting stroke back? We can only hope. This may be the perfect game for us and them to truly see what kind of team it is going to be. Do not get me wrong by no means are the Raptors a good basketball team, but they are a team that the Mavs "should" put away and put away early. The Mavericks have several areas of concern and tonight is as good a night as any to begin to get those issues cleaned up.

Jason Kidd: The Mavericks continue to search for some sort of consistency on the offensive end, and so far Jason Kidd has been one of the only consistent players on the team. Kidd will never just light the world on fire but what he will do is play smart and that is more than I can say for several others on this team. Keep up the nice work J Kidd.

Jose Calderon: Through his first four seasons in the NBA Jose Calderon has averaged 9.5 points per game to go along with his 6.7 assists. Calderon has been known as a very good shooter, although this year he has been struggling with his shot. For his career he is a 50% shooter, this year though his percentage has dropped down to 41%. Last night in New Orleans Jose showed signs that his shot was coming back as he shot 54% from the field on his way to 16 points and 8 assists. Once again the Mavs are going to rely on Kidd's defense against another good point guard. Edge: Mavericks

Quinton Ross Rodrigue Beaubois: Last game I speculated that Carlisle may go with Matt Carroll at the 2 with Ross injured, and I was sorely mistaken. If Ross cannot go tonight hopefully Roddy B gets his second start of the season, and coach gives him just a wee bit more rope. It was upsetting to see him play so well in the first quarter then see a much reduced role later. Let's hope he gets a little more action tonight.

DeMar DeRozan: DeMar is another one of the kids who should have stayed in school and worked on his game at the college level for a little longer. Nothing against the young man but as with all but a handful of those that attempt to skip all or most of college to go pro, they are simply over matched and under prepared. He only averages about 19 minutes a game so we will see a good bit of Antoine Wright as well. Edge: Mavericks

Shawn Marion: The Mavericks must find a way to get Shawn Marion going, his ability to get to the basket and finish is very important to the success of this team. Shawn has continued to work hard even though things have not been going his way and that has been great to see. The time has come for Shawn to unleash "The Matrix" on the Raptors.

Hedo Turkoglu: He can and He do shoot very well. The Raptors like to run their offense through Hedo, lots of high pick and roll, lots of screening. The Raptors will do everything possible to get him good open looks. The object here is to make someone else beat them. Edge: Raptors

Dirk Nowitzki: Ummm can you please not foul out again?

Chris Bosh: Bosh is off to the best year of his career and he will need to be accounted for at all times. Life could get very tough if he gets it going early. Chris has started the year averaging a double double with 29.0 points per and 12 rebounds per game.

Erick Dampier: I do not want to jinx us but is it me or has Dampier showed up ready to play for every game this year? The longer this streak continues the better this team can be.

Andrea Bargnani: Bargnani is a solid pro not going to see anything spectacular from him but he is going to be consistent in what he does. What he has done against the Mavericks in his career is 15 points and 5 rebounds. He can shoot the 3 ball so look for the Mavs to rotate defenders much like they did against Utah. Also look for Humphries to get plenty of playing time against him as well. Edge: Mavericks

Prediction: The time is now for this team to get their shooting touch back. Toronto never in this game Mavericks roll.