Share All sharing options for: Mavericks Vs Heat: Game 23 Preview 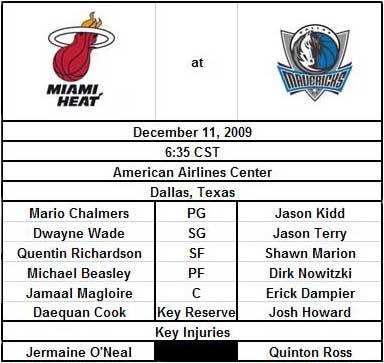 Phil is out tonight so you have me (zdgmans) coming off the bench (don't get used to it).  To his credit, he did write part of this post!

Jason Kidd: This is the situation that every Mavericks fan does not look forward to.  A young stud point guard with something to prove.  While Mario Chalmers is not a Chris Paul he is definitely someone who can score in bunches.  Jason Kidd has shown that he can slow down these young bucks but he isn't a lock-down defender by any stretch of the imagination.  Look for J Kidd to come out on top while getting some help defense from his friends.

Mario Chalmers: Mario has had a pretty shaky start this year, there have been a few spectacular nights along the way but for the most part he has struggled on the offensive end, and on several occasions on the defensive end as well. Good PG play is essential for the Heat, without it they must shift Wade to that spot causing their offense to go stagnate. Chalmers has been playing with a sore shoulder for a while now, and who knows how much that it is affecting his play.

Jason Terry: JET gets another start in place of Josh Howard or Roddy.  I would have been really interested to see Josh get the start to see what sort of defense he could play against Wade but I am sure that it is a bit too early for him to take on the task of guarding the top tier players just yet.  This is a definite mismatch for the Mavericks as JET is not one of our best defenders and while he can score he is just no match for Wade's offensive potential.

Dwayne Wade: Okay I have been sitting here for 20 minutes trying to come up with something to say about D Wade, and well this is all I can come up with... FUCK YOU Wade!

Shawn Marion: Everyone including myself is waiting for Shawn to have a "big" game where he drops 30/10 and just push his defensive assignment around (like the old Matrix).  It definitely could happen tonight if Marion decides that he wants to be aggressive with Richardson.  Quentin is not a prolific scorer and is only a sub-par defender when it comes to matching up with a player of Marion's talent level.  While I can't discount some of the good games he has had, this is a match-up in Marion's favor.

Quentin Richardson: Deadly in stints but definitely not someone that should be considered a true starting forward (who else do the Heat have though).  Quentin has had some good games this year but he is basically at his maximum potential when it comes to this Heat team.  Look for Quentin to host up a bunch of early jump shots to try and get himself going.

Dirk Nowitzki: There isn't really much that hasn't already been said about Dirk.  The Mavericks franchise player will do his part tonight against the Heat.  It seems in Monday's game against the Suns Dirk got some of his scoring touch back (finally breaking the 30 pt barrier after a few bad starts).  Look  for a continued trend upwards as Dirk pours in a 30+ and 10 performance.  Defense is no question here as Michael Beasley is a bit hard to slow when he gets in the zone.  Fortunately, Dirk can quickly get the young Beasley in trouble if he is as aggressive with his play as Beasley is with his D.

Michael Beasley: Is Beasley really a forward?  Only a few years removed from college, Beasley is definitely still a bit wet behind the ears.  Make no mistake about it, Beasley is a very good basketball player who can score in bunches and defend with a passion but sometimes he lacks focus.  This is definitely the year we start to see Beasley mature a bit (now with some of his problems behind him).  Although we already know who the match-up goes to in this case, look for Beasley to still have a great game (if he doesn't get into foul trouble).

Drew Gooden: Drew isn't in the game to score but he is in there to bring energy and get the Mavs offensive rebounds.  If Gooden decides to be active tonight on the boards he could make a killing (as long as O'Neal is definitely out).  Here's to hoping Gooden doesn't decide he wants to take any 15 foot jump shots and instead takes everything close to the basket.

Jamaal Magloire: Okay as a backup but definitely not someone you would enjoy starting.  Do I really need to say anything more about Jamaal Magloire?

OUT - Quinton Ross (back)

Prediction:  As long as Wade doesn't explode the Mavericks should be able to keep the Heat on low (I made a cooking pun there).