Share All sharing options for: Mavericks Vs Hornets: Game 25 Preview 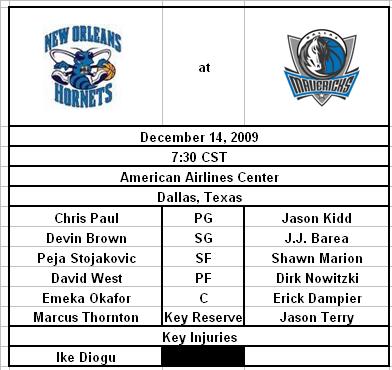 If Kidd was in his prime this would be an unbelievable match up, but in 2009 this is not much match up. Kidd is simply just too slow for Chris Paul. Oh by the way, Chris Paul IS the Hornets and without him they are worse than the Nets.

The Mavericks continue to mix and match pieces here at this spot until Josh Howard can return to a full time starter. So far what they have found that the coaches seem to like is JJ Barea. Now I am not a huge fan of Barea's but in the last few games he has filled the spot nicely, but he has been streaky, it all depends on which end of the streak he is on. As for the Hornets they have relied quite a bit on Devin Brown the 31 year old journeyman to fill this roll. If your looking for "PTPers" well don't look here, cause there is not anything special going on here.

Dirk continues his push to change the "soft" label that has been placed upon him. For the first time in his career he is in position to be voted a starting forward for the West in the All-Star game. David West on the other hand much like his teammate Chris Paul continues to drown in the misery that is the New Orleans Hornets. David West has struggled this year, every major stat line is down for him this year. The Hornets are going nowhere fast, and it's two top players are unhappy.

Erick Dampier continues to impress, in his last two games he has averaged 17 points and 17 rebounds, where the hell has this player been the last 5 years? This is the guy the Mavs thought they were getting before the 2004-05 seasons began, amazing what money will do. Emeka Okafor the former second overall pick of the Charlotte Bobcats continues to be nothing more than an average NBA center. The Hornets thought they would be upgrading significantly over Tyson Chandler, unfortunately for them it just has not worked out so far.

Prediction: The Hornets rank in the bottom half of the league in both PPG and PPG against, while the Mavericks rank in the top 10 in both categories. This game will be close for about 2 ½ to 3 quarters then the Mavs bench will take control.