Share All sharing options for: Mavericks Vs Nets: Game 19 Preview 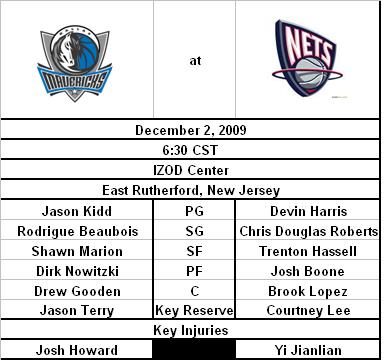 Jason Kidd: The time has come once again for the trade partners to face off against one another. In the previous battles Harris has won the match up with relative ease, does this one go to Harris as well? or does Kidd finally prove that the Mavs made a good trade? Who knows, what I will say is that Kidd has been excellent this year and Harris has been... well not to good.

Devin Harris: I think I can speak for most everyone when I say that I really like Devin Harris, and have wished that he was still here. However he has been just another mediocre player on an awful team this year. As bad as the Nets are I never would have suspected that of the TWO players on the team with a +/- above zero one of them would NOT be Devin Harris.

Edge: Mavericks (did I really just say that?)

Rodrigue Beaubois: Roddy gets the face time as being the starter, but the PT will surely go to JJ and JT. Not real sure what the Mavs plans are for Roddy but the guy should get more than 9 minutes a game, in my opinion, but then again who am I to decide what the Mavericks guard rotation should be? This is one game however that the guard rotation should be irrelevant (I said SHOULD BE)

Chris Douglas - Roberts: Well the first thing that I saw with Chris is that he has the worst +/- on the team (if he played for the Lakers this would not be such a big deal, but when you are the worst +/- on a hideous team it is a huge deal). However with that in mind he has been much more productive as the teams PG than at any other position. Chris does lead the Eastern Conference sophomore class in scoring at 16.4 per, he will turn the ball over though and the Mavs should be able to capitalize on his poor handling skills.

Shawn Marion: Defense, Defense, Defense these are apparently the orders given to Shawn before every Mavs game. This has worked out pretty well so far but I would like to see the Mavs try to get him more involved on the offensive end rather than defering to the heavily over used three guard system.

Trenton Hassell: Since coming into the league in 2001 Trenton's production has neither gone up nor down, however when your production is less than 1 rebound per 10 minutes and 1 point every 5 minutes, does it really matter that you are consistent?

Josh Boone: Once again a former number one draft pick that has failed miserably for the Nets. Josh would be a decent offensive rebounder off the bench, anything past that is not going to be good. The Nets are asking a marginal player to be a starter in the NBA, no wonder this team has yet to win a game.

Drew Gooden: While Erick Dampier was sidelined with an unknown Vaginal disease, Drew was absolutely sensational but has now apparently lost his starting spot back to Dampier? This was a bad mistake by Carlisle and a move that may cost the Mavs later on. Erick Dampier is likely to start but should not, therefore he is not in my starting lineup.

Brook Lopez: He is the lone bright spot on a miserable team. All of Brook's numbers have improved over his rookie campaign. He is a solid scoring option for the Nets and does a nice job on the boards, the Nets offense should and will flow through Lopez.

Prediction: On paper this game is not even close. On paper the Mavs should win this game by 20. On paper this game should not even be played due to the shear destruction that the Mavs would bring upon the Nets. These games however are not played on paper, they are played on the court, and the Mavs have showed over the course of their first 18 games that they tend to play to the level of their competition (excluding the Cavs game), and frankly this game scares me. Since I have been well... not so good with the prediction this yearit will not matter if I am wrong because you are all used to that by now. So my prediction is (drum roll please)