Share All sharing options for: Mavericks Vs Grizzlies:Game 20 Preview 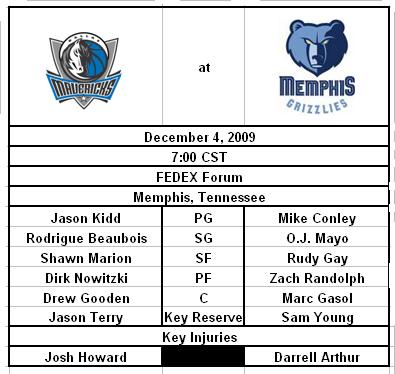 Jason Kidd: Someone needs to go investigate Kidd's home and make sure he is not holding Dr. Emmitt Brown and his time traveling Delorean captive, because he is playing more like the 1997 version of himself. 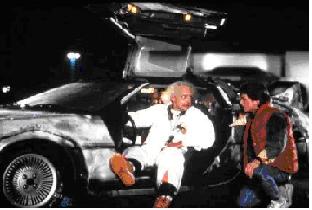 Mike Conley: His points are down and his turnovers are up, a deadly combination not only for his career but his team as well, but then again when you have to play with the likes of O.J. Mayo, and Zach Randolph (two of the largest ball hogs in the league) what do you expect. Mike would be a solid point guard on just about any other team in the league, except the Nets of course.

Rodrigue Beaubois: Another game, another start, another 9 minutes of court time. When will we see more of Roddy B and less of the man with the tiniest arms in the league?

O.J. Mayo: Tons of talent, but no brains. If he would ever learn how to be a team player he could be deadly, but until then he will be just what he is... the +/- on a crappy team

Shawn Marion: The Mavs defense begins and ends with Shawn Marion, he has been the catalyst for this team. When Marion is on the floor the Mavs are +13.5, when he is not on the floor that number goes to +2, not only that but their opponents FG% jumps 5%.

Rudy Gay: If I could take one player from the Griz and bring him to Dallas it would be Rudy without any second thoughts. Rudy is an explosive player and shoots the ball unbelievable well, coming into tonight he is averaging 21ppg and shooting 50% from the field. Can you imagine a Mavs line up of Kidd, Gay, Marion, Dirk, and Erick Gooden, WOW

Dirk Nowitzki: The Mavs will go just as far as Dirk takes them. Tonight could be a huge night for Dirk with Zach Randolph drawing the defensive assignment.

Zach Randolph: As great as he is on the offensive end, he is equalling terrible on defense. He will have his hands full tonight trying to guard Dirk Nowitzki.

Drew Gooden Erick Dampier Who knows: In my last preview I said that Drew Gooden deserved the start, but after Damps performance in that game my opinion has changed. Either player is capable of starting, so whomever gives the Mavs the best opportunity should be the one to start on any given night. Tonight I believe Gooden will be that man... but who knows

Marc Gasol: Is a legitimate 15 and 10 guy, however Marc seems to have some of the same disease that has plagued Tony Romo over the years, you know that thing that causes him to fall apart in clutch time.

Prediction: The Mavs take control early and never look back.