Share All sharing options for: Mavericks Vs Hawks: Game 21 Preview 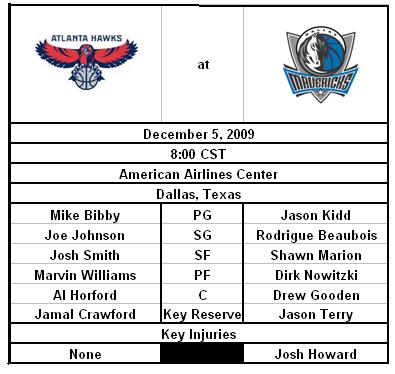 Jason Kidd: Well here we are again the second game of a back to back, and so far this year this has been the game that this team has struggled with. However typically the Mavs have been very good in the first game and they were awful last night. There defensive rotations were slow and they became once again very one demensional, as they shot zero free throws in the second half. This is Kidds job to get this team to move and attack the basket, one night after the team shot 35% from the field Kidd must now try and find a way to inspire his team, because the same lack of effort as last night tonight and they will get blown off the court.

Mike Bibby: Outside of CP3 by far my favorite PG in the league. Mike is just a gamer and has been for his entire career. The Hawks have a very athletic team but make no mistake Bibby is the leader of the team. When Bibby is penetrating and passing and knocking down the occasional deep ball the Hawks are lethal. The Key to beating the Hawks begins and ends with Mike Bibby.

Rodrigue Beaubois: Finally after weeks of pissing and moaning coach Carlisle finally gave Roddy B some extended minutes last night. Even though the Mavs as a whole were awful last night I think everyone finally was able to recognize the difference in the flow of the team between Roddy B and the annexation of Puerto Rico. The difference is undeniable, when JJ is the game for longer than a 4 minute stint the flow of the game goes hay wire, but with Roddy B things seems more fluent. Rodrigue Beaubois athleticism will be needed tonight.

Joe Johnson: Yes he is a tad bit older now and maybe just a little bit slower, there is no doubting his shot skills. His FG% and 3point % are a little low this year, but he continues to lead a deadly cast in scoring at 21ppg. Joe Johnson has the ability to explode for large chunks of points, and this is what makes him very scary and a major point of emphasis tonight for the Mavs.

Shawn Marion: I read lots of comments from people being upset that Marion was on the bench in the 4th quarter while Barea was on the court, and while i would agree the majority of the time, I also understand why that decision was made. Shawn Marion will have to devote more energy tonight on defense than probably any other game all year. I would not be surprised at all to see Shawn play more minutes than he has all year tonight. He will have his hands full with Josh Smith and Marvin Williams.

Josh Smith: Josh has been unbelievable so far this year, he comes in to tonights contest shooting a gawdy 54% from the field. The Hawks play with essentially 2 small gaurds, and 2 gaurd/ forward combos, and a PF in Al Horford. Both Joe Smith and Marvin Williams will be on the court at the same time and this causes serious match up issues not only with the Mavs but just about every other team in the league. Josh is the cutting, driving, havoc creating forward. Josh can also get a little wild at times and this is the Josh that we want to see as Mavs fans.

Dirk Nowitzki: As poorly as he shot last night and as poorly as the team played Dirk still managed double figures in both points and rebounds. Tonight however the Mavs will not survive very long without Dirk being on top of his game. Dirk and the Mavs will probably use a lot of zone defense tonight to try and keep the high flying Hawks from getting easy baskets, and it is the Mavs defense and most notable Dirk Nowitzki's defense that will dictate the final outcome of the game.

Marvin Williams: Marvin is long and athletic with above average quickness for a player of his size, and these are the types of players that genuinely give Dirk and the Mavs trouble. Marvin has been known however to fall in love with his jump shot even when it is not going down. The Mavs need to be ruthless in their defensive pursuit of Williams and the Hawks tonight, slow and lethargic pursuit will not get the job done.

Erick Gooden: This will probably be one of those nights that the Gooden half of the center combination sees the most minutes simply due to the extreme athleticism needed to cover the Hawks. However do not be surprised if the Mavs do not just slow the tempo down to a crawl in an attempt to pound on the smaller Hawks.

Al Horford: Another in a long line of long, quick, and athletic Hawks. The Hawks get the most out of Horford when they are running. Al is very athletic, he moves more like a small forward, but he can finish close to the basket. However if the Mavs can slow the pace down and spend alot of time posting up, I am not sure Horford and the rest of the Hawks can handle that kind of treatment. The problem is that the Hawks simply do not let teams do that to them.

OUT - Josh Howard  (will you please get better and come back?)

Prediction: Well I have been wrog most of the year with my predictions, and hopefully I continue that again tonight. The Hawks are just far to athletic for this version of the Dallas Mavericks to compete. The Mavs are just to inconsistent right now for me to be able to say which Mavs team will show up, but the only chance they have is if the "A" Team shows up.