Looking at The Numbers: What is Wrong with the Mavericks

Share All sharing options for: Looking at The Numbers: What is Wrong with the Mavericks

Well I started to write a big long post about the Mavericks recent struggles, and how that those struggles are the direct effect of not having Josh Howard. However I must be honest, the more stats, graphs, and charts that I looked at the more confused I became.

zdgmans and I were having a discussion this morning about this ridiculous "3 guard" line up that Carlisle has fallen in love with. My early thoughts were that the coaches had actually snookered themselves with this line up. I just could not grasp the thought process of this thing. Carlisle seems to go to this (Kidd, Jason Terry, JJ Barea) exclusively against longer more athletic teams, and even more puzzling at the end of games.

This is so puzzling to me because as I see the line up, Carlisle sacrifices shooting scoring ability with quickness. Do not get me wrong speed in the NBA is a wonderful tool that not many teams have, however a fast team that shoots 30% from the field is far worse than a slow team that shoots 50%.

Maybe I am wrong but my thoughts on how this line up is designed to work are this:

JJ Barea: The speedster, uses his speed to create open shots for others

Unfortunately for the Mavericks and us what has ended up happening is teams have started focusing their coverage on Jet and Kidd, allowing Barea to screw things up on his own.

Barea can be very good in 2 to 4 minute stints, but he absolutely demoralizes this team when left in the game for extended minutes. Here is where the real problem arises for Carlisle and the Mavs. The Mavs do not have a true PG on the bench to back up Kidd, and outside of the youngster Roddy B they do not have a SG either.

In Carlisle's defense he is trying to cover up the Mavs deficiencies by forcing the tempo of the game, but he just does not have the right pieces to be able to do that effectively.

I like many of you want to see Rodrigue Beaubois in place of JJ Barea. The only problem with Beaubois is the unknown, but even in his limited minutes we have seen some very good things, but we have also seen some not so good, in the end he has been average.

So where do we go from here? If I had the answer to that question I would not be here writing to you for free. Yes I have my opinions, as I am sure you do as well.

There are a few things that will need to happen before this team can become more consistent. First and foremost stop shooting so many jump shots and begin to attack the basket. Secondly, end the "3 guard" experiment (surely there is another way to combat length). Last but certainly not least the healthy return of Josh Howard. Josh means more to this team than I ever gave him credit for, and we desperately need him back.

During my search I found some pretty interesting stats and factoids take a look and let me know what you think.

(4th quarter or overtime, less than 5 minutes left,
neither team ahead by more than 5 points) 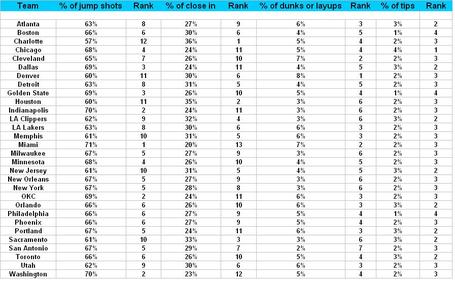