Share All sharing options for: Mavericks Vs Suns: Game 22 Preview 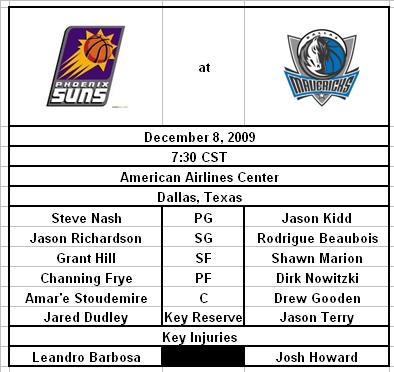 Jason Kidd: The Mavericks will need a little extra from Kidd tonight. The Mavs will have to call on Kidd to try and penetrate in order to create better shots for the slumping Mavericks shooters. Normally this is not a very profitable idea but tonight Kidd will have the leagues other ageless wonder covering him, and this should allow Kidd to at least be on equal ground as far as quickness. However for everything that goes up must come down. Kidd will draw a very tough cover in Steve Nash, and that beautiful teardrop shot of his. It is imperative for Kidd to keep a tight handle on Nash and not allow him to get on one of his shooting streaks.

Steve Nash: How on earth did Cuban ever allow this guy to leave Dallas? Even though he plays for the enemy I still love to watch Nash. As tough a cover as Kidd will have all year (yes that includes CP3, and Tony Parker) he has the uncanny ability to create just enough space for himself to get a good look at the basket, and a good look for Nash is most assuredly a shot that most others would not have a chance at. Nash will create shots not only for himself but is unbelievably good at getting open looks for his teammates.

Rodrigue Beaubois: This is simply a guess on my part as to who the starter will be, it is very possible that the JET will get his second consecutive start. The Mavericks and Coach Carlisle must start getting Beaubois more time on the floor, and his length and athleticism would surely help tonight. However whoever gets the nod will have their hands full with the Suns dead eye shooter Jason Richardson. I believe that Roddy B would give the Mavs their best chance against Richardson.

Jason Richardson: Richardson comes into the night averaging 16.4 ppg and 4.9 rpg but it his FG% and 3P% that are most shocking. Josh is shooting 49.6%FG and 42.3% from beyond the arc, this is one guy that the Mavs can not afford to let run free.

Shawn Marion: Continues to play very solid offense but the Mavs will need more from him tonight. Shawn's offensive game will need to be in full swing tonight for the Mavs to be able to compete.

Grant Hill: Did I mention my extreme hatred of anyone from Duke?

Dirk Nowitzki: Continues to struggle somewhat from the field, the Mavs cannot stand for Dirk to continue to struggle from the field, and settle for jump shots. Dirk will also need to be on top of his defensive game as well, as Channing Frye poses serious problems with his length and shooting prowess.

Channing Frye: While not on the same level as Dirk he does pose some of the same issues that Dirk does. He is a tall forward with a nice 3point shooting touch.

Drew Gooden: Drew Gooden should get the nod tonight ahead of Dampier simply because he is the more athletic option and should be able to stay with Stoudemire with much more consistency than Dampier. Either way though they will need to make sure that he is accounted for on every possession.

Amare Stoudemire: Even after major surgery he still has most of the same abilities he had before the surgery, and continues to be Phoenix #1 option each time down the floor. Stoudemire is at his best in the open court and running, an extremely proficient finish around the basket.

Prediction: If the Mavs starting 5 can stay close to the Suns the second rotation should be able to do some damage. Look for this game to be very competitive the whole way through, but the strength of the Mavs bench will come through in the end.