Share All sharing options for: Mavs Lose Big to Hornets

It's the first quarter and t 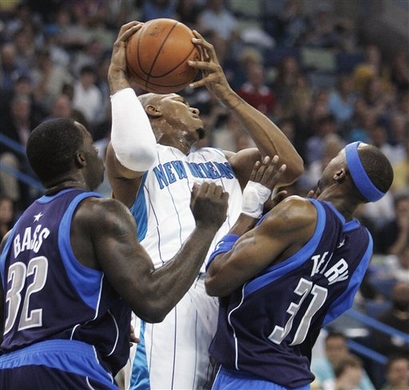 he TNT microphones are in the Hornets timeout huddle to catch Byron Scott tell his team, "they're trying to be physical and aggressive."

At first I'm thinking this is a good sign.  Physicality?  Aggressiveness?  This is what Cuban, Carlisle, and the fans have been asking for!

Then I listened back to in it my head.  "They're trying to be physical and aggressive."  Trying.  It implies an element of failure doesn't it?  And it's not just the connotation that Dallas wanted to  play physical but couldn't that bothers me, but to say it 5 minutes into the game like you weren't expecting it...  You're playing a team within your division who you knocked out of the playoffs a year ago and is currently battling for the 8th playoff spot.  "Expect physical and aggressive" should have been at the top of the Hornets whiteboard.  Perhaps the Mavs reputation precedes them.

But the Mavs started the game "physical and aggressive", or tried anyway, and didn't get much of a reward. A 16 point blowout loss.  A defensive efficiency of 124.03 which is right up there with the loss in Boston.  28% of shots taken from behind the three point line (23% is their average)...

I suppose it would be perfectly rational to not get real down after this game.  Playing in New Orleans the night after playing San Antonio isn't exactly easy.  Fatigue should be expected.  A loss was expected as well.  Josh Howard missed the second half.  This game was even tied halfway through the third quarter.  And Scott's one liner during the first quarter could easily just have been meaningless  coach speak -- something he says at some point in every game.  None of that is making me feel much better about the result though.

If you're looking for 'hope' and 'possibility' go read Mike Fisher's postgame thoughts.  I'm too distracted by the Mavs 9th loss this season by 15 or more  to see the point.