Share All sharing options for: PGQ Game 7 "The Stinker" 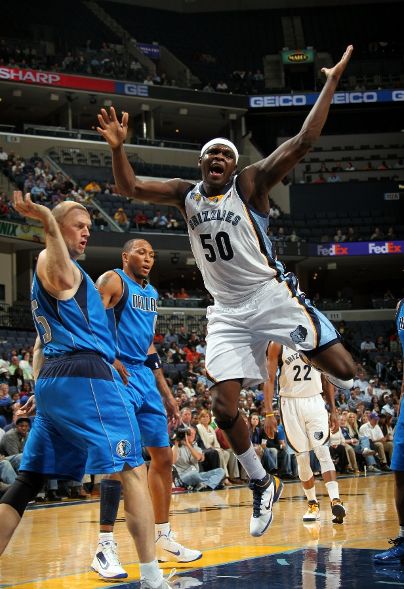 FT-Stats: The Mavs apparently like making FT-related history. Yesterday's game marks just the 5th time [again, since B-R.com tracks stats for - 1986] that the Mavs hit only 5 FTs in a Reg. Season Game. The last time was two years ago. 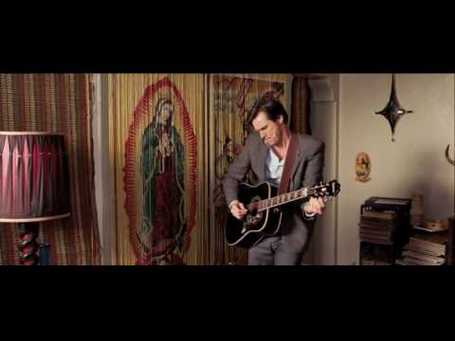 "It was either this or praying in Memphis...."

(On the game) "It’s a very good win for us. Hey, when you’re down a man, other guys got to step up on a good team. And that’s what happened tonight."

(On Marion starting) "Shawn's approach to this whole thing has been top notch. He knows how important his role is, and he knows he's still a high-quality starter in this league. He's a movement-maker on offense and a good defender."
(On Marion's game) "On Shawn had a great all-around game…We put the ball in his hands to make some plays and he did a good job."

(On the Shawn's) "We got the ball to Marion a few times. He made some great plays off of pick-and-rolls. Other guys stepped up and made open shots. Stevenson hit a couple of big shots to start the third quarter, and it got us going in the right direction."

(On De'other'Shawn) "DeShawn's a real pro. He's just playing real solid basketball . . . He's giving us solid defense and is making open shots. It's been a big plus, having him in the last couple of games."

(On Dirk) "This guy is so tough, it is ridiculous. Not many guys would come back in and try to play after rolling an ankle like that. But it really helped us. His presence on the floor changes the geometry of the game, even if he is not touching the ball." 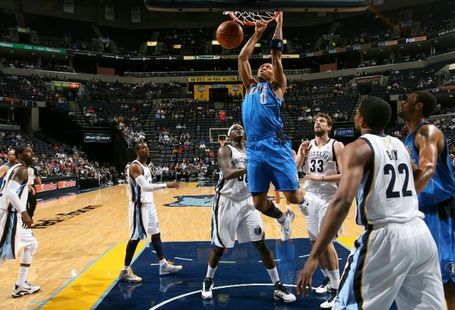 As they say in the Poker World: "Shawn Marion dunks on your Full-House."

(20 and 7 tonight, what's up?) "My teammates got me involved and we were out there feeding off of each other and just doing what we've got to do to get a win. We have a very talented team. Everybody is capable of going out there and having a big night. It’s just a matter of if you’re getting the touches and who’s got it going…We collectively did what we needed to do and we got it done. That's what's up." 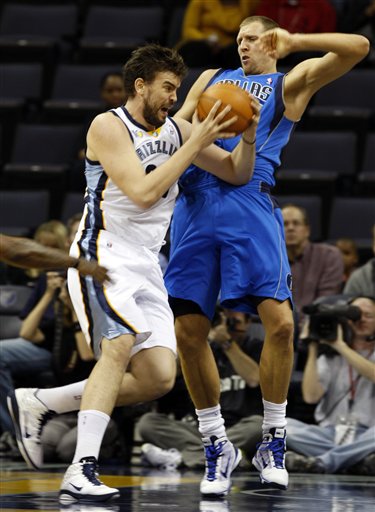 "Come on, Marc just because you look like a Grizzly and play for them, doesn't mean you have to act like one."

(On the pain) "It's usually the initial pain that hurts a little bit. But as soon as I walked off, it got better. I got re-taped, and it was all right in the second half. It wasn't great, but it was loose enough to play."

(On the ankle) "I don’t have anything left in there, so it doesn’t even swell up when it happens.’’

(On who's at fault) "I rolled it pretty good. But I wasn't jumping, I was just pivoting and stepped on somebody's foot, maybe Jet's, I think."

(On returning to the game) "When I got back, it didn't feel great, but after a couple of trips up and down, it was doable. And luckily, everybody else played a phenomenal game. Our defense was great and Shawn and J.J. and the centers were great." 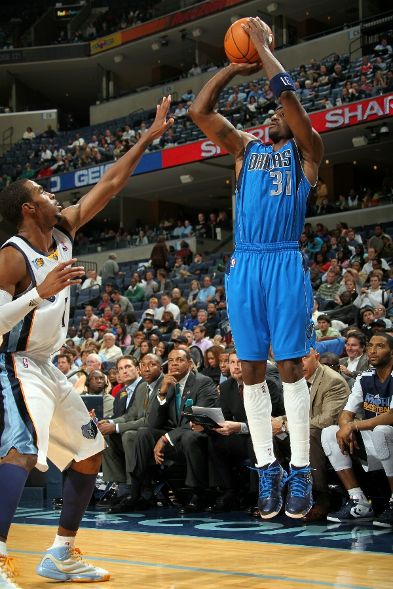 (On Dirk going down) "When Dirty went down, I knew he’d get back up. But I was still in my same mode. I was loose. J-Kidd was doing a great job of distributing and the shots were falling."

(On Dirk coming back) "That's the toughness that made him the MVP and the toughness that has us winning 50 or 55 games every year. He's one of our leaders. Just one. And when he does something like that, you can't help but follow."

(On starting DeShawn) "It's something that I guess we didn't foresee coming in the season, but now it's definitely an option that we have to have. His defense, his toughness, and his shot-making ability opens everything up."

(On the Centers) "Give credit to the big fellas. They set the tone early - patrolling the paint, grabbing the rebounds, controlling the offensive and defensive boards and then running the floor hard. Haywood and Chandler, they don’t get a lot of shots and opportunities on this team, because of the scorers we have. But tonight, they came to play. They took care of what they had to and we feed off of it." 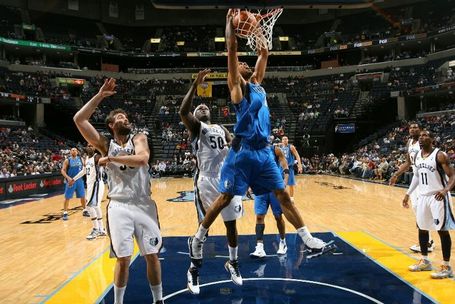 (On revenge) "We felt like we gave away one at home, so we wanted to come back here and get one."

(On the third Quarter) "We really pushed the tempo in that third quarter. I thought we spread the ball around great. The wings got out and ran, that opened things up. And Jason Kidd just made the right play at the right time." 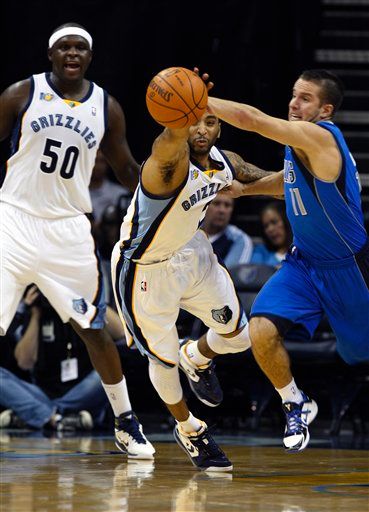 (On the game) "We had to get that one back that we threw away at home. Dirk was amazing. He wasn't even 60 percent, but he was out there giving it everything he had." 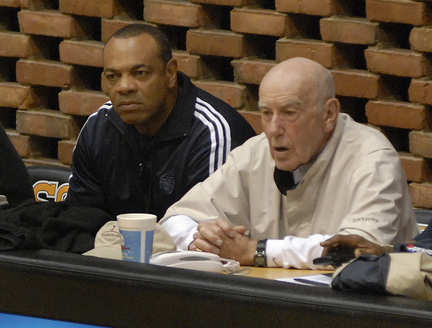 "I never thought you'd mean that with the Bricks literally, Lionel..."

(On flukes) "I said before the game that Dallas was going to come in and play because they felt like the loss at home was a fluke. I don't think our guys came out and competed like we believed it wasn't a fluke."

(On competing) "Even if you are shooting 20 percent, you can still compete by playing defense, rebounding and make the other team have one less point than you. You can't just quit and not compete."

(On his constant third quarter lineup changes) "I was trying to stop the leak. They were making layup after layup. I tried to change up the energy and see if some other guys could bring it. Some guys brought some things, but we didn't have enough consistency. We only had 12 turnovers, but it was at a time in which we didn't need to have any. It just got out of sync and the guys just couldn't focus and get their poise back together.''

(On the Effort) "It's just one in 82 games. You try to win as many as you can. You try not to have a whole lot of these stinkers."

"That's what this was. A stinker." 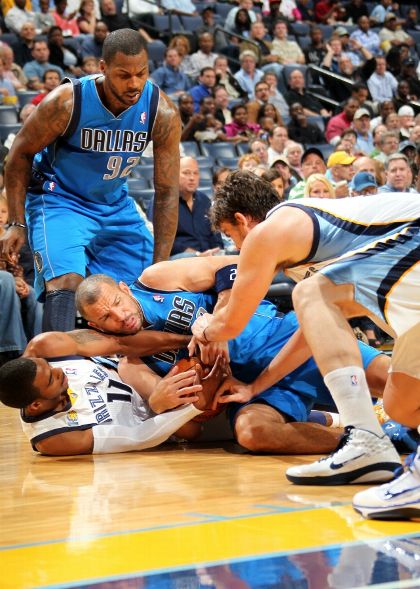 Stevenson: "Should i or should i not? Decisions, decisions...."

Conley: "I NEED this one for the steals leaderbord! Gimme that ball!"

(On the game) "Defense was the key. They were able to run whatever they wanted to, and we weren't being aggressive. We weren't able to stop them." 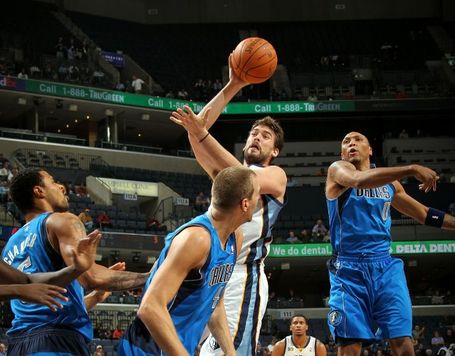 "You call that a pimp slap, Shawn?"

(On Stinkin' it up) "It hasn't happened much. But everybody dropped. We're not the team you saw tonight. Please no Gasoline jokes."

(On the loss) "We’re going to try to put this one behind us because it’s tough to lose like this. We have another one Saturday and we’re going to learn from it. We’ve already talked about it. We have to try to stay positive right now."

Assist of the Night

Yes, NBA.com has the Grizzlies broadcast almost muted, too. Thanks for asking.

Disclaimer: If you couldn't tell by now, all italic sentences are made up thoughts, not actual quotes. Also, Lisa is speaking in short, rigid sentences. Shoutout to Mike, too. Just because.