PGQ Game 11 "The Glass is crushed", not half-full or half-empty

Share All sharing options for: PGQ Game 11 "The Glass is crushed", not half-full or half-empty 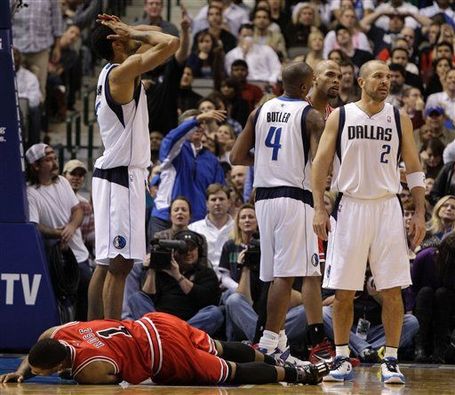 Disclaimer: Random Thoughts (by me) before the Game

1. So the Mavs have their first b-2-b? And Chicago is on a roadtrip with their 3rd game in 4 nights? Dallas should win comfortably (>10) and hopefully rest dirk and kidd in the 4th because they don't have time before the second game to visit the the club in which Joe Johnson got his stripper pregnant. I know, the Bulls are a good team, a good defensive one, too, but they are not a good road team yet and still without the Booze. Derrick Rose is great but doesn't get to the line enough. Joakim's Dad was my favorite Tennis Player. Always liable for hilarity.

2. I wonder if the Mavs will lose the first quarter again...

3. I hope that Roddy will not be longed for as the missing link after these two games...

5. I could use some friggin' time. Still haven't seen the Philly game.....

6. Man, if the Mavs Bench can't even outperform this Bulls Bench, i might lose it..... 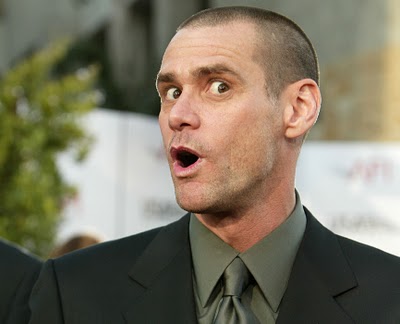 "What? No, i can't use undoing two games in a row. The internet guys would kill me."

(Share your concerns with us) "Tonight, I’m concerned about our rebounding. There’s gonna be nights that Dirk’s gonna have a huge night, he’s that great a player. But, look, when the ball’s in the air, that’s when games are won or lost. Tonight, we didn’t get it done when we needed to there."

(On handling using Butler) "We started going to Butler because of the matchup there, and he delivered for us two or three straight times. That's always been his motto. Deliver."

(On the strange concept of rebounding) "There were a few that we had and they ripped out of our hands. Those are simple plays that we have got to make and we didn’t make them. And when you don’t make them they’re lost possessions and they’re addition opportunities for good teams. Unfortunately, that’s how you can lose games."

(On the end) "It came down to a possession game. Some of the scramble plays, we scrambled our tails off. We just couldn’t finish with a rebound…No excuses. Those are plays we’ve got to make."

(On the Bulls off. rebounding) "Surrendering 20 offensive rebounds and 25 second-chance points to eight is way too much…Unfortunately, that was the results and they made a few more shots."

(On giving up many 2nd and 3rd chances) "You’re just tempting fate too much. When that happens, plays like the Gibson heave at the end of the clock, those go in."

(On the Bulls) "They’re very persistent. Look, Noah’s the second-leading rebounder on the league. The might be No. 1 after tonight. And Gibson had a huge night on the boards, too…And there were a few that we had and they ripped them out of our hands."

(On the Hawks) "The Hawks are a very good team. They're athletic, and so it's another tough game." 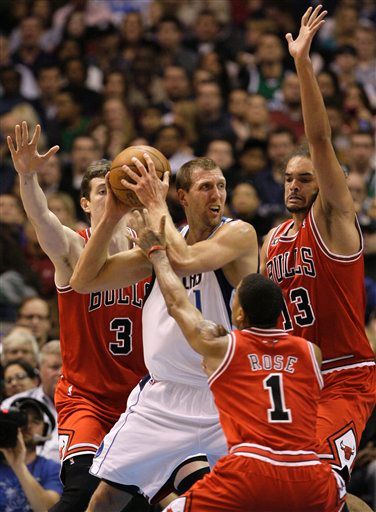 I'm not sure... should i really pass?

(On the Reason for the Loss) "We just absolutely got crushed on the glass. I don’t actually think our defense was that bad. It seems like they came up with every loose ball. It’s like they wanted it more."

(On the shooting numbers) "We weren’t hot today and it was obvious when we only had 35 points at the half. I think the pace was more what they wanted, a slower type game."

(On the Bulls) "You got to give Chicago credit. They keep coming and play tough."

(On playing the Hawks) "We just got to sleep in as much as we can and get some rest. We’ll try again tomorrow." 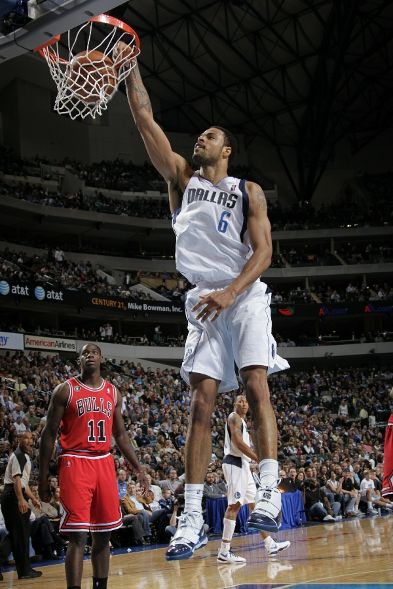 I could use a few more lobs..

(On the Mavs' play) "We were playing good defense, scrambling out there. But a lot of times we didn’t finish the play."

(On the zone) "It makes it tougher if you don’t stick to your assignment. We have the opportunity to be a good zone defensive team. I think percentage-wise, it’s been good for it. But what we have to do is finish the plays out."

(On playing the Hawks) "That’s the thing in this league. You want to make up for a loss like this, you go get a big win in someone else’s house. It’s gonna be a tough one…But we’ve got to bounce back and give it everything we’ve got." 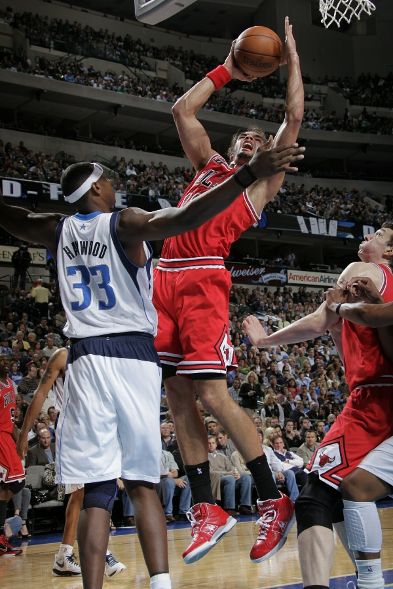 (On the Mavs play) "I think except for Dirk a lot of guys struggled tonight, but I don’t think the game was lost on the offensive end."

(On the off. rebounds for Chicago) "It comes down to Derrick Rose putting a lot of pressure on guys at the rim and forcing bigs to help. That leads to easy tip-ins and stuff like that. So, penetration and no boxing our in the zone is probably what got us the best."

(On Gibson) "Taj Gibson had a great game, hit big shots and finished strong around the rim and he rebounded the ball great. You’ve got to tip your hat to him, but at the same time you can’t get outrebounded like that." 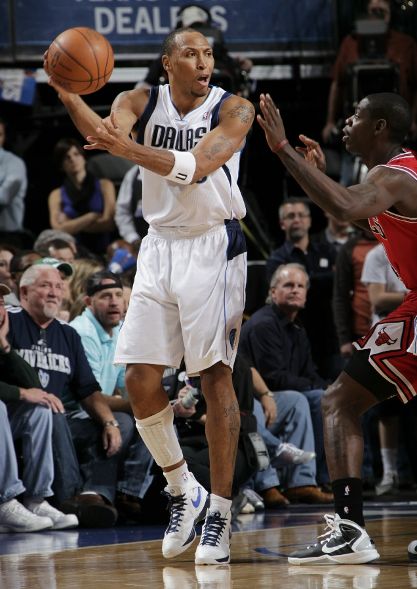 (On second chances) "They were able to get their second chances on the offensive glass. It’s frustrating. It wasn’t our defense, it was their second and third effort. Tonight, it just seemed like they were jumping a little bit higher than we were." 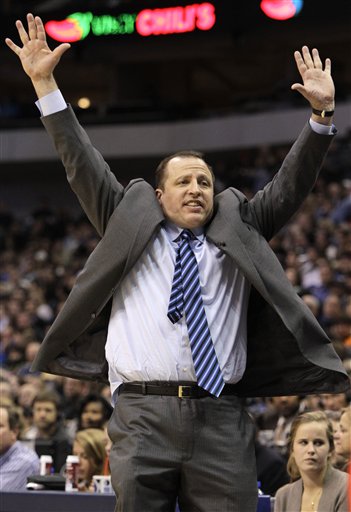 (On the 2nd half) "I thought we kept fighting. We were aggressive against their zone. We did not settle for jumpers. They started Terry in the second half and they were quicker."

(On his bench and backcourt) "C.J. Watson came in and played really well and Kyle did lots of good things. The bench is getting more comfortable and playing well. I feel we have a very good bench. C.J. and Derrick matched that quickness of Terry and Kidd and we controlled their dribble penetration and Dirk walking into those jump shots."

(On Noah) "When he plays with high energy like that and goes after the ball, to me there’s not a better guy in the league in terms of activity." 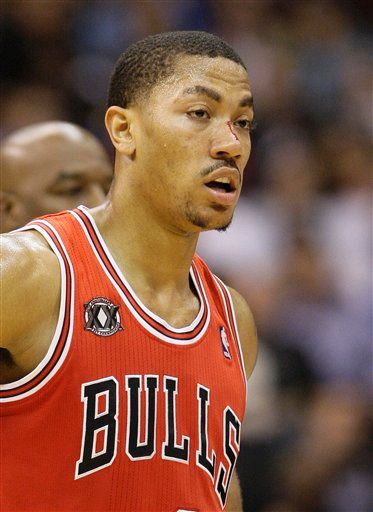 Chicago's sexiest athlete does not approve.

(On Dirk's swipe at his nose) "My swag is a little down as you can see. I don’t like getting my face touched. I’m just mad right now. I didn’t get any stitches, not that I was going to let them." 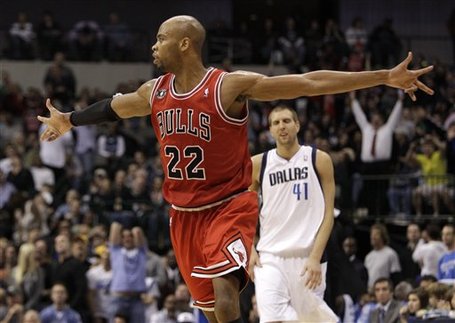 (On his shooting night) "Coach knows I've been working on my jumper, but he said don't rely on jump shots. Attack the glass and hit the boards. I've struggled the last two games so he challenged me. We were watching film Thursday and I was bad. I was waving players away so I could shoot. That’s not me. But coach said to keep shooting, but get in the post and be relentless on the glass."

(On the games before tonight) "It was real frustrating the last two games. I felt I let myself down and I let the team down, lackadaisical jump shots. It wasn’t good basketball. But my teammates were supportive. Derrick said to keep shooting, Jo. and Carlos told me to go after it. Coach said to be relentless on the glass and in the post. I’ve got great teammates. They understand what I can do and I just wanted to be solid and get myself going."

(On his 3) "It wasn’t a throw up, I just shot it. I stepped into it and shot it. I shot it with confidence and it went in. It was my first ever. I had to celebrate. I remember so many players hitting threes on me and their reaction and it upset me. So I had a chance and a nice moment to celebrate. Never had a three pointer at USC or in high school. Coach lets me shoot them in practice. He said one day I will have the confidence to step in and shoot one and tonight I stepped in and shot it. When it went in, it was a huge sigh of relief. I thought, ‘He’s not going to take me out now.’" 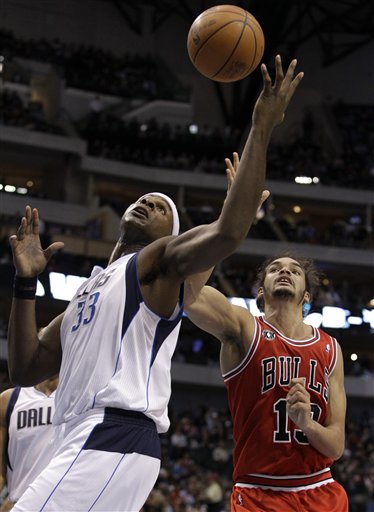 (On his personal play) "I was not happy with the way I was playing the last two, three games. Sometimes I get caught up in the game. I can’t go through the motions. I’ve got to go after the ball all the time. We fought hard even when we were behind. We're not a team that gives up."

(On Dallas) "What was exciting was we’re playing good basketball against an elite team like Dallas. To come here without one of our cookie monsters (Carlos Boozer), our potential is pretty scary."

(On team chemistry) "Everyone feels it and everyone knows it. It’s up to us now to live in the moment and focus on getting better. Our bench is going a great job. It’s all showing we’re pretty close."

Things i need to say. Feel free to disagree in the comments.

For a bunch of formerly good-to-great rebounders, you sure do suck at boxing out. The Bulls nearly doubled you up in that category. This shit doesn't happen often. Don't come me with that 'all zone and midgets' excuse. Gibson and Noah combined for more boards than the entire Mavs crew.

Dallas might be the only playoff team with home-court-disadvantage. What do you not like at playing home? You should blow teams out instead of letting everybody hang around till the very last minutes! Cuban recently said on Espnradio, that, statistically, homecourt counts as a 4point advantage, homecourt with a good crowd as 4point something. Advantage as in, for the home team, not against it.

Caron Butler: Josh-Howard-syndrom. Thinks he is a jumpshooter on a jumpshooting team, so why not shooting jumpers?

Tyson Chandler: You missed 3 FTS!? WTF is wrong with you?

Dirk Nowitzki: You missed 3 FTS! AGAIN!? WTF is wrong with you?

Jason Kidd: When the Mavs got him, i remember thinking that he needs athletes around him, not shooters. The very first play of his second Mavs-stint was a lob for Josh Howard in a Game agains NOH. Josh could not dunk it and had to lay it in. He went downhill ever since....Ok, back to this game: Over the years, i grew accustomed to occasional 1-6 FG, 1-5 3FG 0-0 FT Nights with the single non-3FGA a toe-on-the-line 23-footer games that can be fairly labeled as sub-par. Nice that you bricked two less tonight. But 1 Board and 4 Assists in 31 Minutes? [Barkley-voice] Jason Kidd is rolling over in his grave.

Jason Terry: Dirk told you years before: "I don't understand why you look one night like an all-star and the other night like crap." Well, do you understand why? Here's a hint: It rhymes with squeaky hooter and nothing else.

Brendan Haywood: Erick-Dampier-Syndrom? Only cares a little in contract years, then refuses to give a shit after getting paid. Also pretty sensible and needy, which synergizes exceptionally well with being lethargic.

JJ 'NBA-STAR' Barea: If you don't overachieve every game by drawing at least 2 charges (more than you have turnovers) and hitting 50%FG, then "WTF is wrong with you?" seems like a pretty big understatement. Every. single. time.

I'd also like to share that you were once asked (only half-kidding) in a radio show interview - linked at your own website -  by some radio homers when you will take the reigns from Jason Kidd and start at PG. Which brings me to...

Rick Carlisle: Who really loves his 3-guard lineup, almost as much as the zone. Who can't handle tuff juice. Who can't trust/develop rookies. Who can't get a consistent effort out of this group. Who...cares?

Disclaimer #2: If you couldn't tell by now, all italic sentences are made up thoughts, not actual quotes. Also, we're waiting for Lisa's upload.