PGQ Game 13 'HELP! Somebody open up our offense!"

Share All sharing options for: PGQ Game 13 'HELP! Somebody open up our offense!" 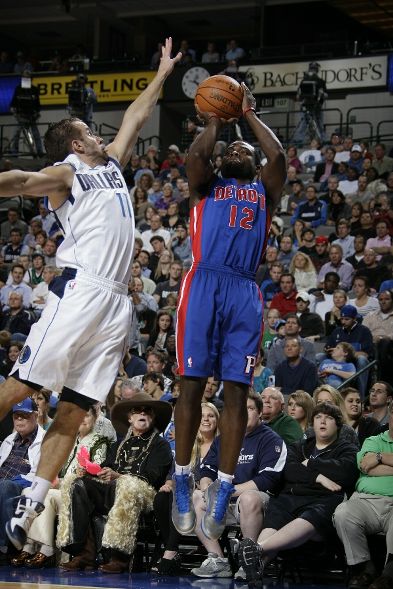 The Mavs (beat/lost to) [the Detroit Pistons]¹ tonight (thanks to/even though) Dirk was awesome. The (cloud in the silver lining/major culprit) once more was the lack of support from his team-mates, with the exception of Tyson Chandler/Jason Kidd². Especially useless was Jason Terry/Caron Butler/J.J. Barea/Shawn Marion/Brendan Haywood³ and it is HOLY FUCK THEY’RE ALL USELESS.

³ Two at the minimum, up to all five of them

(Describe the Game in Gamblers-speak) "We had some good opportunities in the first half, and we just couldn't cash in. It was disappointing."

(How's your credit score?) "Games go like this sometimes, and you've just got to stay in it. You've got to battle. We got down 12 and battled back. I give our guys a lot of credit."

(Ok, really, how was the game?) "It was a slower-paced game, a playoff-style game. But we found a way to get it done. It isn't always going to be pretty. Or ever."

(Playoffstyle? Against the Pistons!?) "It was the kind of game you have to have patience and discipline to hang in and win. And you had to make plays when it counted, and we were able to do that." 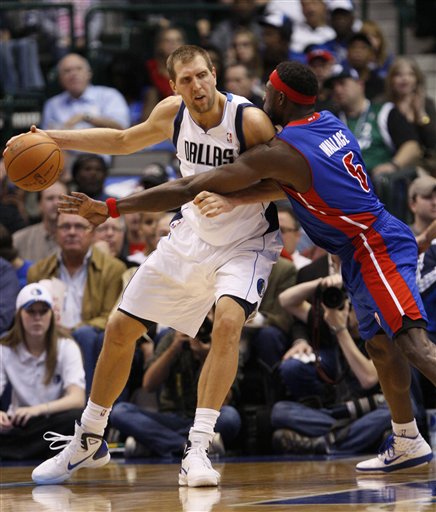 Wallace: "Forget it Dirk. You'd need to drop over 40 to beat the Mighty Pistons! MUHAHAHA!"

(The Mavs allowed 20 Shots at the Rim and achieved only 11 Attempts themselves. Please tell us we are not doomed.) "I haven’t been on a team that’s really consistently defensively that good. So that’s a positive."

(On the Second 'Nearly Undoing' Quarter) "I don't know what happened there. We had a nice little lead going...We got a little dry there in the second quarter and just couldn't make any shots."

(On hideous 38.5%) "For some reason at home we’re not shooting the ball well and that was the case tonight at last week against the Bulls and then we go on the road at everybody has a great game against Atlanta so for some reason at home, I don’t know if we’re too relaxed, we’re not shooting the way we want to. We really had to grind this one out, it wasn’t pretty for awhile and we were down 10 or more and we fought back and really executed down the stretch. We got some stops and Jet finally got hot there in the end and made some big baskets."

(On Butler) "Early in the fourth quarter he tried to rip through and tried to be aggressive and made some good plays for us. I think we all got to mix it up, get to the foul line some, especially when the jumpers aren’t falling. Caron got us going there in the fourth quarter with a couple of good drives. We just needed something going."

(Talk about the hot start at the beginning of the game and then the shooting went cold?) "When you get early leads you just can’t run away for four quarters, teams are way too good in this league and they are going to keep coming, keep competing and we hit a dry spell in the 2nd quarter. We would have loved to get an easy win tonight and get some rest but sometimes you have to grind it out."

(On the Thunder next) "We’re going to have an unbelievable challenge tomorrow night at Oklahoma City. They play really well at home. Their crowd is one of the best in the league. Kevin Durant is one of the best players in this league. So it's another challenge."

(On his shooting/ FT-bricking) "Overall my shot feels pretty good but I need to address my free throw shooting and I miss three tonight."

(So it's Beaubois or Bust?) "Hopefully Roddy will come back and open our offense up a little bit." 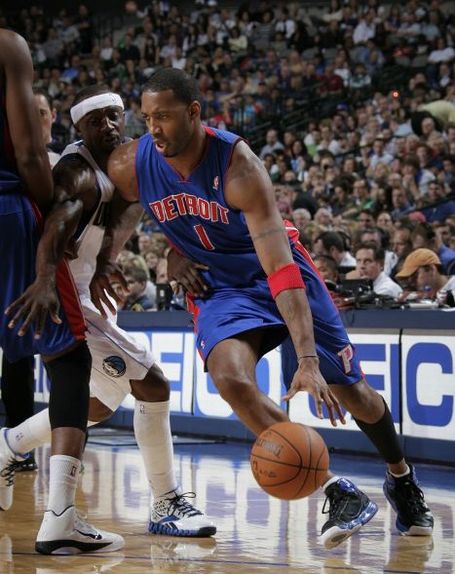 "Fighting over a Screen? JJ would be proud of me."

(On the first three quarters) "For whatever reason, we weren't in a good rhythm. Dirk had it going, so we were looking for him. We were feeding him."

(On getting things done) "I have a huge responsibility in the fourth quarter to make plays and get things done, myself and Dirk. The team is depending on us. Tonight Caron got us started in the fourth, and then we kind of led the way at the end."

(Do you actually plan to play that poorly at home?) "A lot of times the plan doesn't work out. So what do you do, abort mission? No, you do what it takes and what's necessary to get the win."

(On needing to comeback against the Pistons) "There’s somewhat of a concern. But, it’s still November. It’s still early and guys are still getting comfortable with their roles, knowing when they’re coming in the game and what not. It’s all about flow and rhythm. Do you want to have that flow right now in the first month? You’d like it, but does it mean anything? Not necessarily. So, it’s a work in progress."

(On Dirk) "It was winning time and the big German was hot. He was tremendous. It never ceases to amaze me the way he's able to fill it up."

(On the Shooters) "Caron got us started in the 4th quarter and then we went to the 2-man game with myself and Dirk. We’re thankful for the victory tonight. When you shoot 38% and 30% from 3 and still win that’s a positive. If we had those same stats last year I don’t know if we get this win tonight."

(On the importance of others attacking the rim) "When Dirk has the hot hand we’re going to go with him, but I think the key stat for Dirk tonight was the 16 free throw attempts. When he gets to the line like that means he’s not just settling for jumpers and he was aggressive and that opened up his jump shot more. I don’t think he hit the rim on many shots tonight." 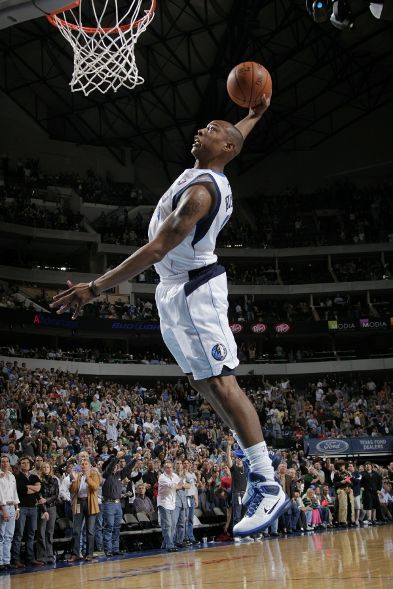 Have they raised the Rim or am i just getting old? 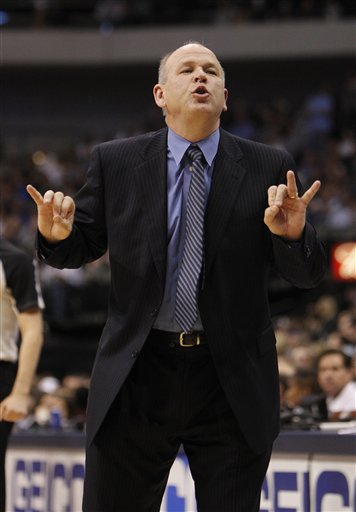 (On losing the 12 point lead in the third) "Our guys battled so hard in that third period. We were making some great decisions with the basketball. In the first half, the thing that was disappointing was we had two turnovers and still ended up with 15. So we ended up taking care of the basketball in the second half. The fourth period we didn’t sustain defensively the way we had been playing in the third period. We needed that second group who did a great job in the second period to play the same way, and we just didn’t have the same energy."

(On the reason for the small lineup against Dirk and the Mavs) "What happened was, Tayshaun’s got length and he can still do some things. He’s really playing at a high level offensively, and so we were trying to take advantage of that matchup too. It’s a shame because I thought our guys did a great job. But it seemed like Rip had played so well in the game before and then all of a sudden this game here he didn’t shoot the ball well, but he still played hard." 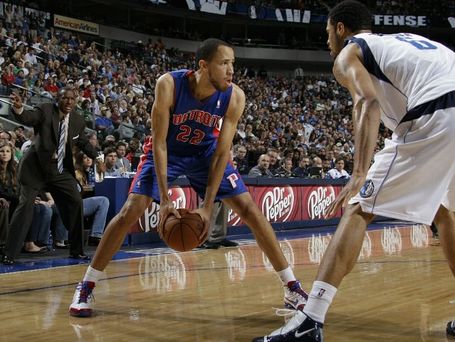 Casey: "Watchout! He's gonna pumpfake once and then drive right and finish with a right handed running hook! Don't foul him, Tyson!"

(This game looked like yours for three-and-a-half quarters) "It’s a tough one, a tough one. A couple calls went against us there at the end of the 3rd quarter and kind of changed the momentum of the game. They got to the foul line and kind of changed the momentum of the game. So this is a tough loss for us because we controlled the game pretty much throughout. We knew it would come down to Jason Terry and Dirk making plays at the end. It’s a tough combination to try to stop, especially when you are the 5th worst Defense in the NBA coming into this game, however they made the plays when they had to do it.

Tracy McGrady (of all people) 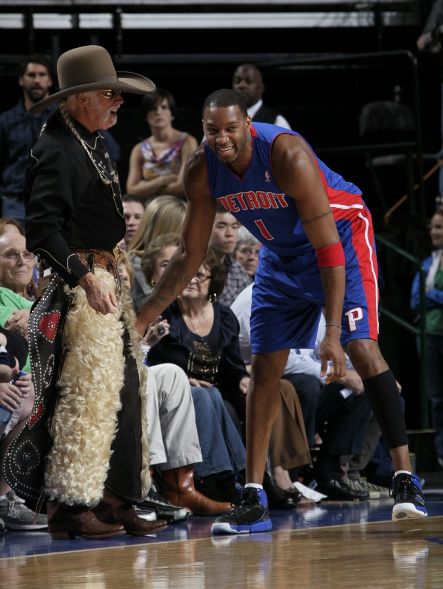 "If i want to change my knee with yours? Thats a good One..."

(Great comeback to get back in the game, what do you think ultimately cost it for you guys?)  "Well, just couldn’t stop Dirk. Him and Jason Terry were running that pick-and-roll and it was like pick your poison. And Dirk was making shots, Jason Terry was making shots, and when you’ve got those two guys going they’re a tough team to beat."

(Dallas get two offensive rebounds on one of the last plays there at the end)  "Yeah, we were down 2. It’s unfortunate that we couldn’t get those loose rebounds. We put ourselves in a great position to win the game. This is a tough team to beat, especially on the road."

(You ultimately lost but you did come back from starting the game down 16-2)  "Well, we’re not into moral victories. We definitely felt like we should’ve won this game. It was a winnable game for us, we played well for three-and-a-half quarters. It was just in that latter part of the 4th quarter that they went on that run."

Also, NBAPlaybook says Mavs win because of 2 off Rebounds.

Disclaimer: If you couldn't tell by now, all italic sentences are made up thoughts, not actual quotes. Also, ugh.