Share All sharing options for: PGQ game 14 'Rest is overrated' € 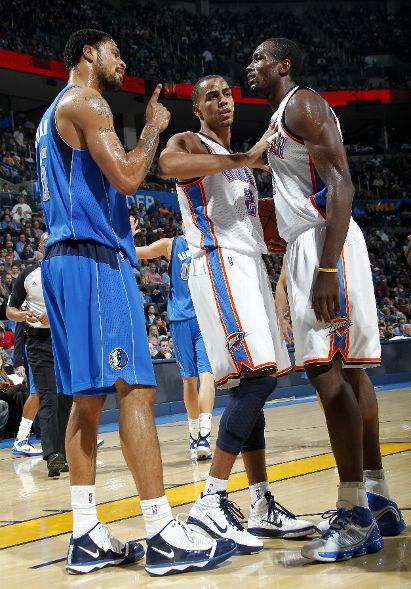 "For the last time, it's Chandler, not Candle R. Heck, i don't even play CS!"

The Mavs (beat/lost to) [the Oklahoma City Thunder]¹ tonight (thanks to/even though) Dirk was awesome. The (cloud in the silver lining/major culprit) once more was the lack of support from his team-mates, with the exception of Tyson Chandler/Jason Kidd². Especially useless was Jason Terry/Caron Butler/J.J. Barea/Shawn Marion/Brendan Haywood³ and it is HOLY FUCK THEY’RE ALMOST ALL USELESS.

³ Two at the minimum, up to all five of them 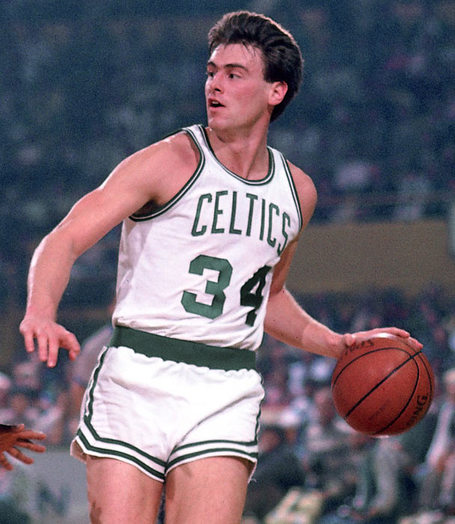 (On Dirk's 4-Pointer) "Dirk's four-point play really sparked us, that's what brought us back."

(Jean-Jacques Taylor is walking by.... Quick, say something ridiculous about your veteran team!) "I think rest is a little overrated in this league. And the thing that I like about this team is that this is the tightest-knit team since I’ve been here. These guys are really close to taking 80% jumpers. They never quit on a game except when they feel like it. They never quit on a situation unless it's this jersey shore thing. They keep encouraging each other, and we just look for good things to happen at least once a week."

(On the win) "It’s a really exciting win for us and it’s a great win for us…So much of it has to do with our efficiency and how we’re tied together as a group."

(On Chandler's play) "Tonight was a great example of what he’s meant to our team. Creating possessions for us by just outworking people inside, and he got a lot done around the basket scoring the ball, too. He was great."

(On the b-2-b) "We have never quit on a game, we just look for good things to happen. This is a great win for us on the second night of a back-to-back."

(On the Spurs upcoming) "We enjoy this win tonight, tomorrow we give thanks and then the next day we get ready for the next one. And you can’t sit around patting yourself on the back in this league, because it will come back and bite you." 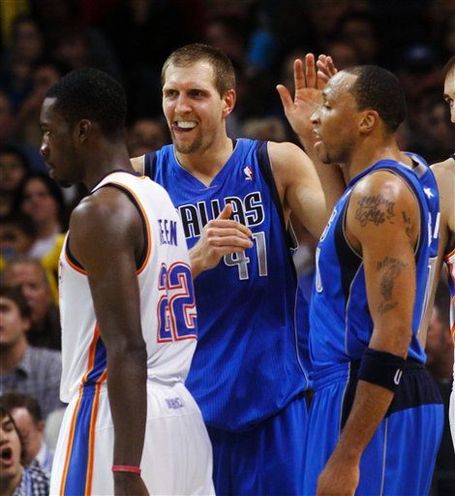 (On the second night of the b-2-b) "This team has a bunch of veterans who compete. It was a great way to respond today."

(On not folding when available) "They made a run there at the end of the third. And we could have just packed it in, but guys kept on battling."

(On hitting big shots) "What always helps in this league is making big shots, and we got hot at the right time. It was definitely a good time to get hot and make some shots."

(Who was best?) "Really the guy that stood out for me was Chandler. He had an amazing game, battling on both ends of the floor…He gets the game ball from me. Tyson was all over the place tonight." 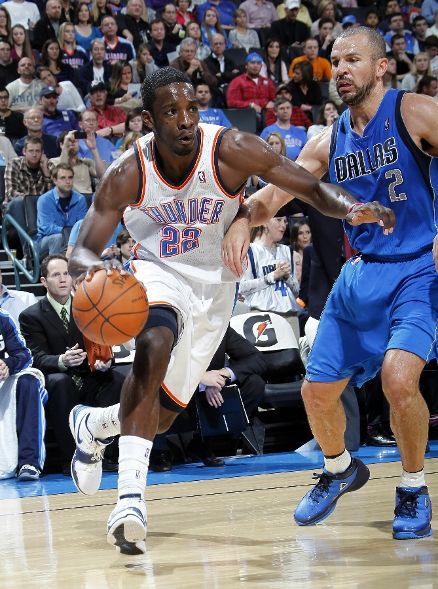 If you don't shave, photographers will not take many pictures of 2-9 guys.

(Your opinion on the Aztecs.... err, bench) "You’ve got a bunch of guys who have sacrificed, but you have a bunch of guys who work hard and want to win. I think everybody has experienced their individual showcase of points, rebounds, you know, stats, and I think you’ve got a group that says, ‘Hey, if I can help the team by coming off the bench, everybody gets the same ring if we can achieve that at the end.' " 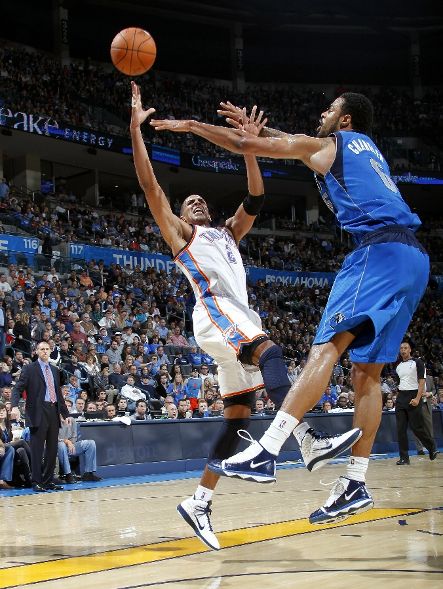 (On the Win) "To come in here on a back-to-back and be able to win on their floor is a huge win for us."

(On extra motivation - the waived trade 2yrs ago)"You always want to add a little extra motivation. So coming in here I wanted to have a lot of energy and, you know, this is one you want to get. Tonight, I wanted to make an effort of getting out there, bringing energy, running and making sure that guys are sprinting ahead with me. Because of that, we were able to get a lot of activity around the rim."

(On the Thunder) "I don’t think they could've run us out. They couldn’t run us out because we fought so hard. Even if we lost this game, I think we’d feel good about ourselves because this was a valid effort.’’

(On the Mavs) "Tonight I felt like we all were in tune. Even inactive guys in suit jackets were in the huddle cheering guys on, keeping our spirit lifted. I thought that really impacted the game."

(On Dirk missing making big shots) "I love it. I absolutely love it. It catches me off-guard every single time because you just don't expect that." 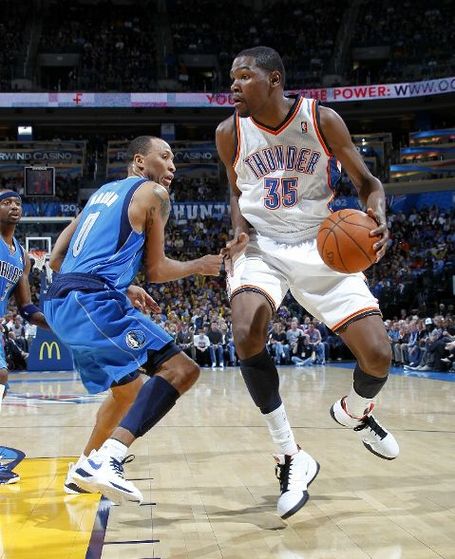 (On 1st half vs 2nd half) "I kind of put my teammates in a bad situation. My teammates did a great job of picking me up. And then when I was able to get back in, I made sure I asserted myself."

(On the team spirit) "It’s a team thing; we all collectively helping each other and supporting each other. Like I told J-Kidd because he’s like, ‘I’m missing shots.’ I was like, ‘Well shoot till you make it. It ain’t going to go unless you shoot it.’" 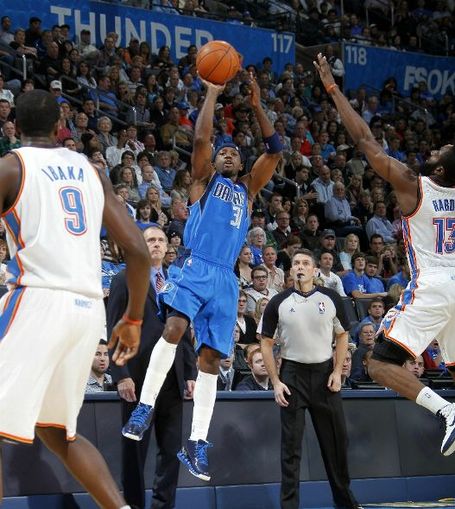 Asserted thoughts in that moment (Guess whose thinks what):

- His name is Terry? I always thought thats an abreviation...

(Please advertise a random over-the-hill tv series) "It was a nip-and-tuck game. Though they got up nine to 10, it didn't feel like it. It felt like it was a one-point ballgame the whole game, and defensively we just kept grinding it out and getting stops."

(On the comeback via Dirk's 4-Pointer) "And all of a sudden our offense came alive there in the fourth quarter." 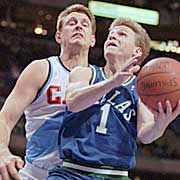 (On Halftime) "At halftime, it was about as well as we could play offensively.

(On the threeball) "They got hot. Let's face it. This is a good team. They hit a lot of 3s, and they were missing a lot of 3s early in the game."


(On the threeball, for the last time) "We were giving them energy with their three-ball, we weren’t finding guys in transition and they got hot, they got hot. Dirk, there’s some times when you can’t do much when he does what he does. He’s one of the best shot makers in the history of the game and the way he does things is hard to defend. We battled. We made it as tough as possible. We put him on the line 15 times. It’s way too many times for us to overcome."

(On Dirk's Four-pointer) "That took anything we had going and we couldn’t overcome it."

(On his Outlook) "We’ve got to continue to get better. I like our guys and what they’re about and what they do and I believe in them. We did not have a good fourth quarter game tonight. It’s nothing to be ashamed of. We got beat by a better team tonight." 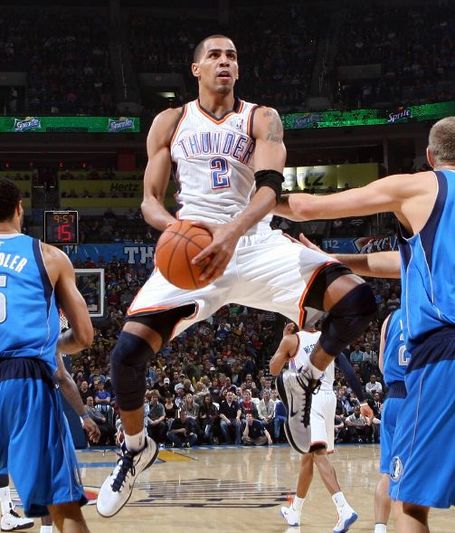 (Could you trashtalk to Dirk in Schwizerdütsch?) [Ignoring the question] "They made their run at the best time possible for them. Right in the fourth quarter, and then we couldn’t really close the gap and come back."

Steal of the Night

This one is just for Lisa

Almost Hooray! Since originally proclaiming [read: nodding unconsciously to Jeff Caplan's question] that 20 Points and 20 Rebounds are the goal for the Mavs Centers to combine for during their 48 minutes, it only took 6 (partly putrid) games to achieve said lofty goal. Chandler contributed 17 Pts and 18 Rebounds, Haywood 3 and 3 before going out (thigh). Only the kicker was to block 4 shots, too. Chandler 1, Haywood 1. So, no cigar.