Share All sharing options for: PGQ Game 17 'Recipe for success'

A good chance to repost one of the most Epic Bench Photos of all Time. OF ALL TIME!

The Mavs (beat/lost to) [the Houston Rockets]¹ tonight (thanks to/despite) Dirk’s awesomeness. The (cloud in the silver lining/major culprit) once more was the lack of support from his team-mates, with the exception of Tyson Chandler/Jason Kidd². Especially useless was Jason Terry/Caron Butler/J.J. Barea/Shawn Marion/Brendan Haywood/Dominique Jones³ and it is  THEY’RE ALMOST NOT ALL USELESS.

³ Two at the minimum, up to all five six of them. Which is why Dominique Jones has been sent to the D-League. Avery says it's a good punishment. So, there... 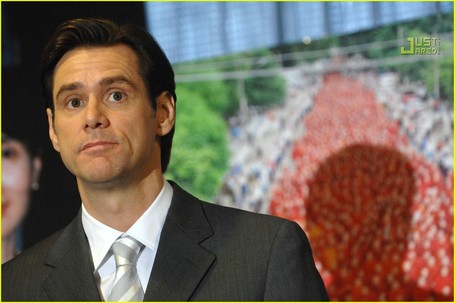 So, no, sending Jones to the D-League has nothing to do with increasing JJ's playing time. I  really don't know what you are onto with this question...

(On the strong second half again) "Well, we are trying to play well. We want to get leads and put teams away when we can. Our third quarters the last couple of games have been very good and if we can be a good third quarter team that is always going to be a good thing in this league. We are playing a persistent team, so you have to stay in there and keep battling. They challenge you on every possession on both ends. Our first quarter was so-so, we were a little better in the second, better in the third and then you know, unfortunately ended the game poorly with an 11-0 run which is disappointing. But, it’s a good win. Minutes were very reasonable. We have to get some work in tomorrow and get ready for Wednesday."

(On Caron Butler’s third quarter) "When a guy gets going, our guys do a good job of finding him. We are not doing a ton of play calling right now. You know, Jason Kidd had a lot to do with the way Butler got going out there. They had some stuff going among themselves that was really effective and when he Butler gets a hot hand, he is really tough to get under control. That was great. Marion had another really good all-around game. His rebounding was terrific. Barea’s penetration was big. Look, it is a good win. Again I am disappointing with the way it ended, you just don’t like giving up an 11-0 run when your team is trying to stop people. But, we will take it and move on."

(On the team’s defense) "We are working at it. We had some errors in the first half, particularly in the first quarter and as the game went along things tightened up and we did a better job. We have to continue with this persistence at the defensive end. We have to be steadfast about the importance of it. You know, last year we had a good defensive start and then we had a couple of lulls along the way and we just can’t allow that to happen this year. We have to keep pushing."

(On Butler’s play) "He is an aggressive player. He has a great attitude as an offensive player. He is a aggressive. He forgets about misses and all he is thinking about is the next shot going in and that is a very healthy attitude to have as a basketball player. Again, I give our team credit for keeping him sort of going there in the third quarter. A couple of shot he hit were very difficult shots. But, it’s like hot goalie in hockey. When a goalie get hot they can stand on their head and stop anything. So, we look for hot shooters and we want to milk them."

(On Marion's play) "Marion had another really good all-around game. His rebounding was terrific."

(On playing a short-handed Houston) "We should have won by 20. It is disappointing really. I am glad we won. I am glad we didn’t run up minutes on our main guys and as I said, we just have to be really steadfast on the importance of the defensive end and finishing off plays. This team is a team that is going to make you play the full clock. They move it great, they make plays, they have a bunch of guys that can pass, shoot and cut and they put you in tough spots. This is a good game to play and this is not an easy game to win even without those two guys."

(On Dojo being a Legend for now) "Dominique Jones is gonna go to the D-League for tomorrow night and potentially the next three games. It's a chance to play, it's a chance to work on his game. I’m sure Legends coach Nancy Lieberman will kick his ass, which is great. It’s an opportunity. Not many teams have a D-League team this close in proximity, so it’s an great opportunity for us and for him." 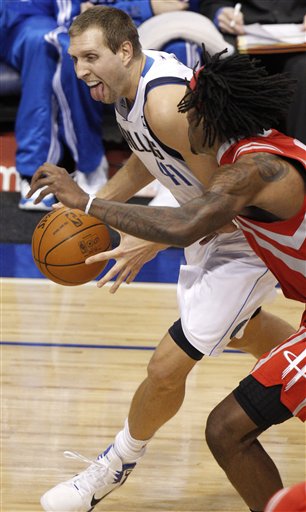 The tounge-check rule is really being enforced.

(On Butler's hot hand) "Jason Kidd was doing a good job of calling the plays. And if a guy is hot like that, you've got to milk it. So, it was definitely fun to watch."

(On the defense) "We held them under 40 percent basically all night. That's definitely the way to go for us - be solid defensively, rebound the ball, push the ball up and then get good looks in transition."

Caron 'I might continue to talk to the media after home games, who knows!' Butler 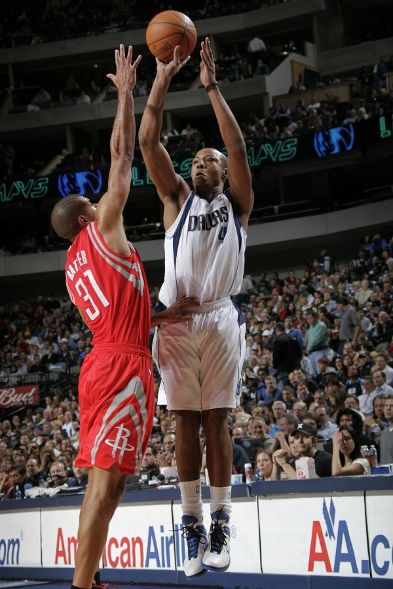 That's all we do.

(On the possible trap game) "We didn't want to fall into that. Done."

(On the win) "We knew that we had to create our own energy and had to police ourselves out there on the court. Just staying on each other, didn't want to drop the energy and that's exactly what we did."

(On D) "The defense was huge. It was a collective effort. We did a great job of making their key guys take difficult shots."

(On his horrible play subpar perfomances at the beginning of the season) "Tough times don’t last. Tough people do. I stayed the course, and I’m getting rewarded."

(How's that possible!?) "Just taking advantage of opportunities. Just catch and shooting the ball, and obviously Jason Kidd was telling me to come off the curl and be ready. And that's exactly what I did."

(On his 3rd quarter hot streak) "I was in the flow, one of those zones you get in a dozen times in your life, and your teammates keep feeding you."

(On his Point Guard) "We're playing with the greatest point guard, one of the best ever."

(Chances are, you're not keeping this up) "I’m going to continue to step up. As long as I’m healthy and out there on the court, I’m going to produce. Now get out of my face!" 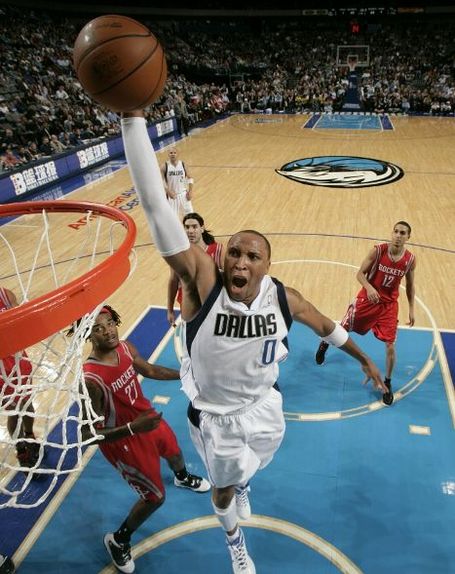 (Talk about how this team is getting it done on both ends of the court?) "It’s great and everybody is out there helping each other and we’re just having a good time playing right. It’s showing in everything that we are doing, we’re moving the ball great on offense and just enjoying it right now."

(How much confidence does this team have right now?) "A lot and we’re trying to put our statement on the game and finish each game strong. We’re starting to see our road energy is starting to carry over to home now and that’s a plus for us." 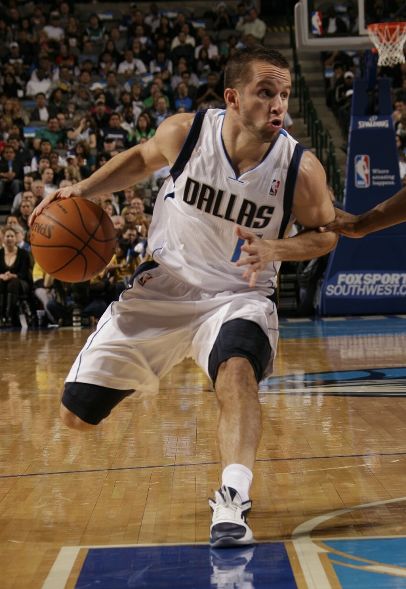 The Reason for JJ Barea's recent surge is obvious.

(On the game) "We started kind of flat tonight, but the bench came out and really gave us energy in the second quarter and then in the third quarter the starters really took over and it was done from there."

(On his percentages) "My shot is coming around, I just need to keep on practicing and stay confident."

(Moment of sad Truth: why are you important to this team?) "We have a lot of jump shooters on this team and coach wants me to really be aggressive when I come into the game and really attach the paint on the pick-n-rolls." 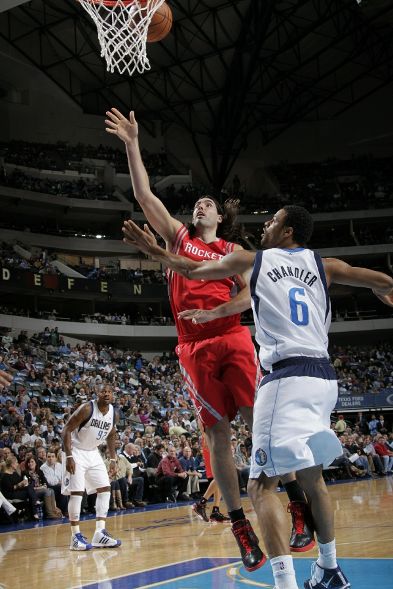 "I know what you did last summer, Luis."

(On the possible trap game) "It seems like a team like that always catches you, and we didn't want that to happen to us." 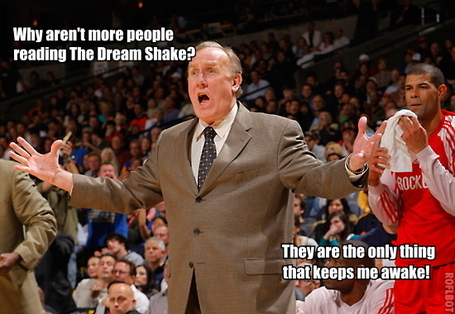 (Why did you lose?) "Just gave up too many spurts - end of the 1st half, the 3rd quarter and the 4th quarter both. Guys did a good job at the end of fighting back but they jumped out at the start of the 3rd and the start of the 4th of both quarters."

(Did the Mavericks get rolling with shots you wouldn’t want them to be getting?) "Yeah, we did the same thing the last two-and-a-half minutes of that first half. It was tied or whatever and they got the 7-point lead on us and we missed three or four opportunities and they scored. But, we didn’t do a good job of containing penetration. Barea came in and really hurt us, got to the middle, but then Butler, the shots he took, Shane Battier was right on him. But once they get it rolling that’s a good team. They get Butler going and Nowitzki going it’s tough to contain them." 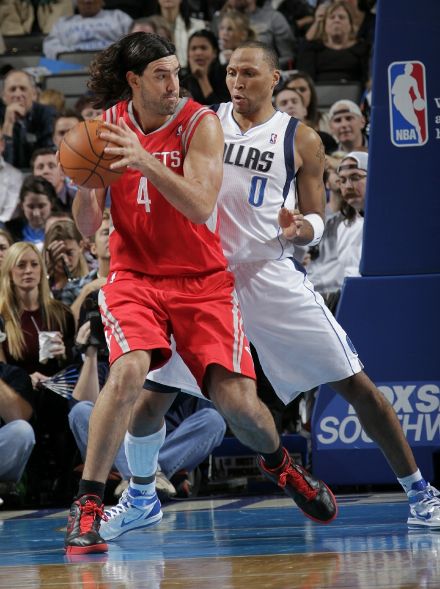 The remaining best flying Hair in Texas at work.

(On the game) "It was a tough game for us. It was the second half of a back-to-back, and it was hard, but we should have done better We should have played a better game, the guys at the end of the game did a great job; they kept playing, they kept fighting, and that’s a good thing." 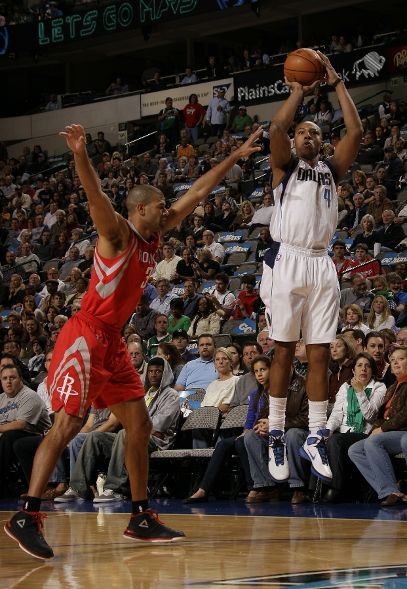 (on Caron Butler’s shooting) "You live with those shots. Normally long jumpers are a recipe for success for the defense but every now and then the shooters beat the odds and tonight was one of those nights."

(On the Mavs) "Dallas is playing really well. There’s a reason they’re one of the top teams in the NBA. For us to beat them here tonight would have taken a heck of an effort. We fought hard in the first half, we just didn’t make enough shots to keep up with them in the third quarter and they hit a lot of jump shots, which normally is our M.O. on defense, and some nights you just get beat that way – that was the case tonight."

(On the reason for the Loss) "We tried to match them jump shot for jump shot and that’s not really our strength. When the jumper’s not going, you have to find ways to manufacture points at the free throw line and go to the post, and it just got away from us a little bit." 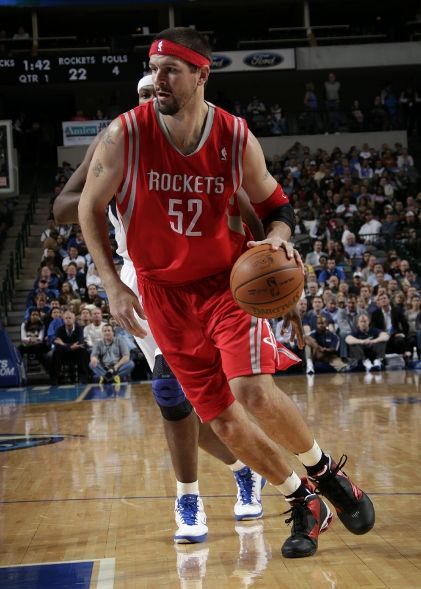 Brad Miller has a flashback.

(How do you spell Undoing in Houston?) "It’s just the same story. We just don’t finish the quarter or finish the half. It’s been our downfall all year, the last couple minutes of the quarters. We’ve just got to find a way to lock it down at one of those points and not allow big runs like that." 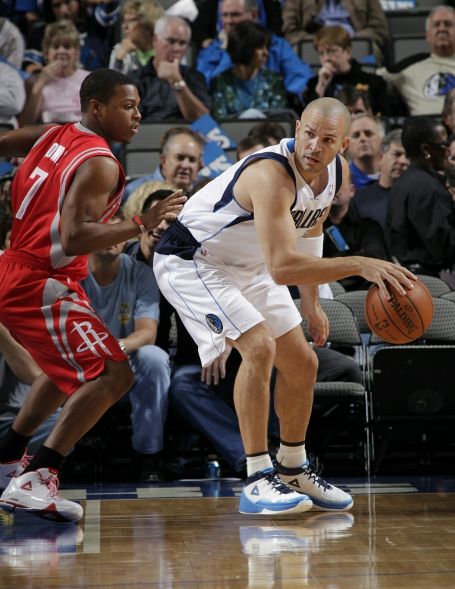 (On the Mavs running away in the 3rd) "They got hot and we didn’t. They hit a barrage of jump shots. Caron Butler scored 11 straight points, made some tough shots. Fluke. We got to find a way to get buckets."

(On the Rockets defense) "They always run their offense. We could have put a little bit more pressure on them, but we got to find a way to lock down and not let them get the shots that they want. We got to react when they react, we can’t react after they make their cut. We’ve got to be the one attacking defensively."

Assist of the Night 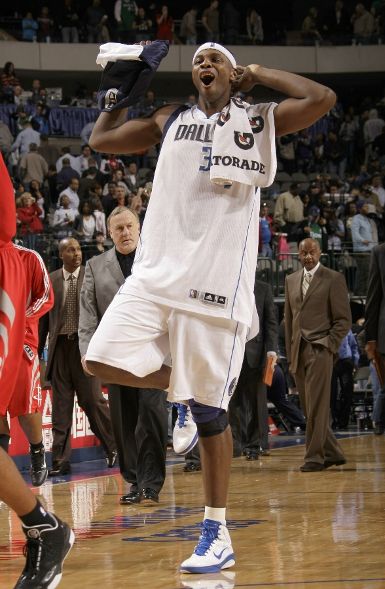 Disclaimer: If you couldn't tell by now, all italic sentences are made up thoughts, not actual quotes. Also, Props to Rockets.com.