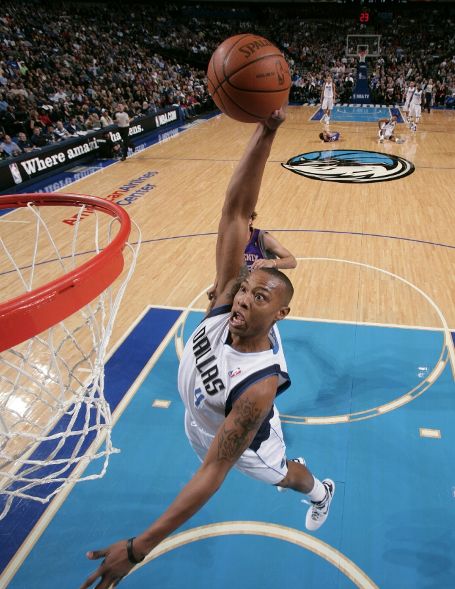 That, right there, was the game.

The Mavs (beat/lost to) [the Phoenix Suns]¹ tonight (thanks to/despite) Dirk’s awesomeness. The (cloud in the silver lining/major culprit) once more was the lack of support from his team-mates, with the exception of Tyson Chandler/Jason Kidd². Especially useless was Jason Terry/Caron Butler/J.J. Barea/Shawn Marion/Brendan Haywood's FT Shooting³ and it is (GUESS WHAT) THEY’RE ALMOST NOT ALL USELESS. 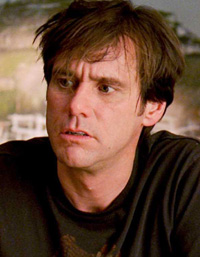 "If Haywood keeps bricking these FTs, does that mean i have to play Mahinmi more than 3 Minutes? Nah, that can't be right..."

(On Nash going down) "The game certainly changes without Nash, there's no question. He's one of the best players ever. He's 2-for-3 when he went out four minutes into the game. He was very aggressive, and he was going to have a major impact on the game one way or the other. I hope he's OK. He’s one of, I think, everybody’s favorite players to watch. So, we hope that he’s OK."

(On the Defense) "They had some threes that they missed that were goods looks. I thought we contested a lot of them and took them off a lot of them. But again, it’s a good win even without Nash out there, because they have a lot of other really good players. But it’s not the same game."

(On the Offense) "Our plan was to push the ball, so we tried to keep it up-tempo. Our best offense was coming when we were getting stops and getting it in Jason Kidd’s hands and getting out there."

(What's the key, the secret with your center(s)?) "All three centers played key roles in the game. Tyson got us off to a good start. His energy in the third was a big factor. And I thought Haywood was dominant when he was in there in the first half and in the second half. And then, when Ian went in, he immediately sunk four free throws and that ended the game. That was key, too."

(On struggling at home) "We're still learning about ourselves, learning about what it takes to really play at a high level in this building. I think we showed some really positive signs, and there's still some things we have to get over the hump on. But really, the fans are not excited from the start, and we don't do many things to get them excited. So it's always kinda meh in terms of atmosphere."

(On facing the Heat next) "It’s gonna be a very challenging game for us. I’m sure they’ll be thinking about revenge and all that stuff. But we’ve got a day off, we’ve got a day to practice and then we fly. And it’s a challenge we’re looking forward to." 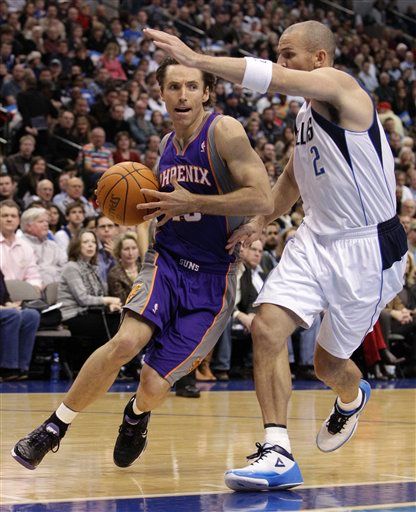 (On Nash) "We're both competitors. We love to go at one another. We both want our teams to win, but health is more important. I just was happy to see him walk off the court."

(On being sick of homecooking already) "I thought it was a great homestand, 5-1. We hadn't been playing well at home. We had a lot of leads, big leads and we've given some away, but the big thing is we're learning how to play with a lead, and sometimes we fall in the trap of just going through the motions. But I thought we had a great homestand."

(On the Heat's Playermeeting a few weeks ago) "It must have worked. They've won 11 in a row and so they're rolling right now." 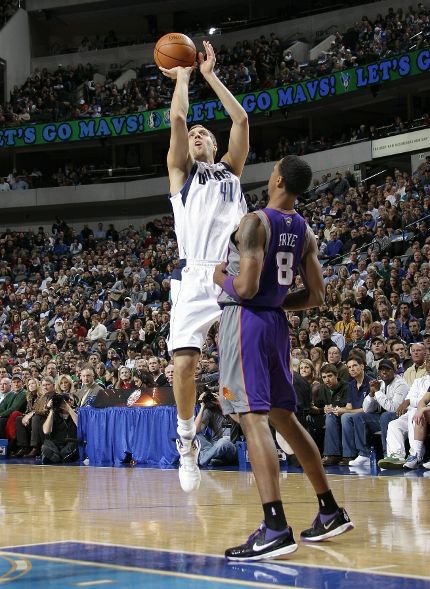 Take notes, people, this is how you hold Dirk under 50%.

(On Steve Nash going down early for the Suns) "Yeah that was obviously very unfortunate situation. He kind of collided there with Tyson (Chandler) and the next thing you know he was laying on the ground saying hey I can’t feel my hands, I can’t feel my hands so it was a very, very unfortunate thing so both teams hope he is okay soon. He’s a warrior. He’ll recover quick. But from that standpoint it was an awkward night. After that it was a weird game both teams were concerned but we still had a job to do. We went out there and held them to under 40 percent shooting and if we do that we give ourselves a good chance to win every night.

(On the Homestand) "Six-game stand, I'll still take 5-1 even though the one we lost was a rough one, a disappointing one being up 20, but you just can't win all the games in this league; teams are good."

(On letting more leads slip) "We were up 20 and I thought there in the 4th that we had a chance again to keep the foot on the pedal and they kind of hung around and it was a 13 point game and we could have blown the lead open but we did a decent game of keeping the lead and coast through and get the win. But we have to figure something out there, to kind of keep the pressure up, especially defensively."

(On being just under 40 points away from eclipsing Larry Bird) "The first time I heard that was after the last game a reporter asked my about it. Obviously that’s unbelievable to me and I really don’t know what to say. If someone we have told me that 12 years ago when I came into the league and would have said that they were out of their minds. This whole 13 years has been an amazing ride with some ups and downs but the major thing to me is still a championship and that’s still missing so I don’t care how many points I’ve got in this league I still want that ring on my finger so that’s what I’m trying to go for. I’ve got four more years here and hopefully we can get the job done." 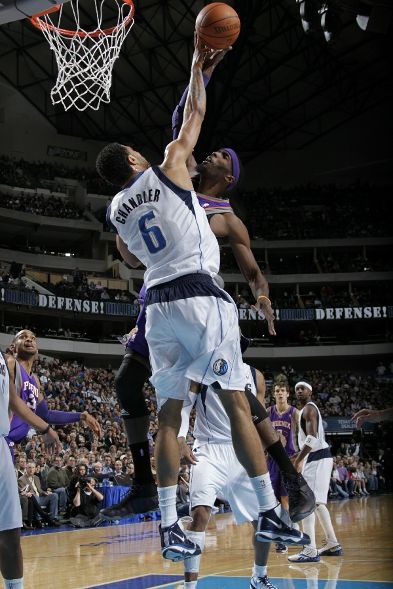 (On Nash going down) "We were both going for the ball. I knew it was gonna be some contact. I was trying to actually avoid the contact - try to just get the ball and avoid it. But he dove in and his head ran right into my hip. And as soon as we made contact I knew it wasn’t gonna be good for him, because my hip was hurting and it was his head obviously." 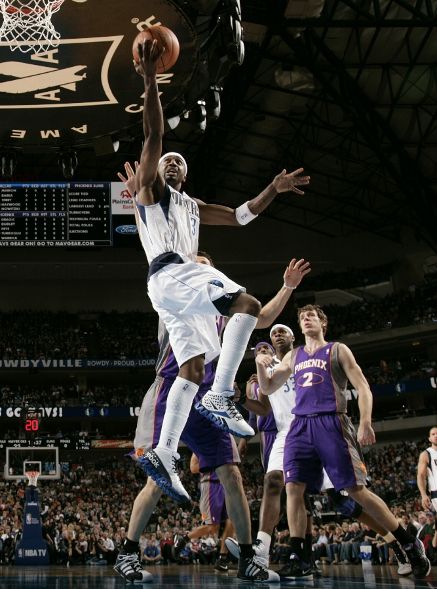 (On benefitting from playing with Trix) "Shawn and I always communicate, on and off the court. And so, that chemistry is there. I know where he’s gonna be at on the floor, he knows where I’m at. And it helps us out there, especially on the offensive end."

(On closing leads)"We got to put teams away, that's our weakness right now. It came back to bite us once. I think that's the only negative that comes out of this home stretch. But you learn from it. If we're still talking about this in March and April then we're not doing our jobs." 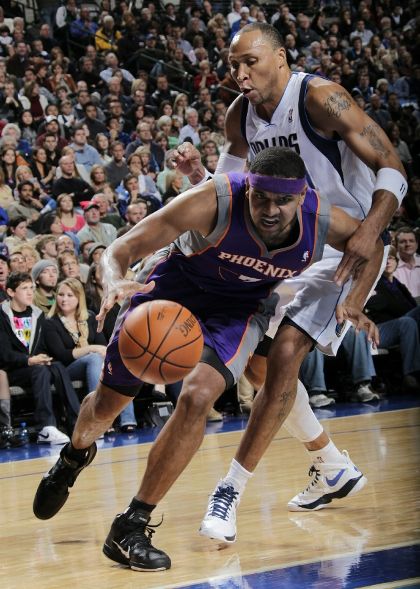 (On benefitting from playing with JET) "We’re just feeding off each other. We’ve kind of got a sense of where we’re gonna be at, and we’re ready to come in and provide that energy on both ends of the floor. And that’s what it’s gonna take to get us to the next level."

(Paging Cpt. Obvious...) "We were just doing what we had to do to get this win." 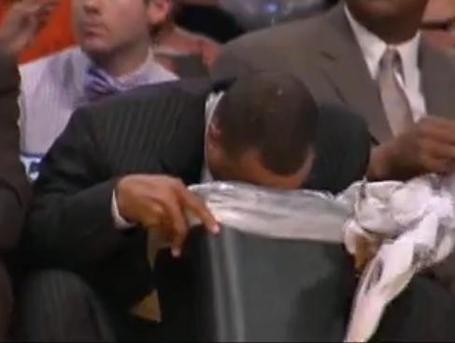 (On the condition of Steve Nash) "Everything seems to be fine. I’m sure we’ll get some more tests done and everything. But, it’s a little scary – you fall on the floor and you don’t have feeling in your hands and your legs and that can scare the heck out of you. But, he seemed to have those back, but not 100% so we’ll just see how it all works out. Obviously it’s tough losing him."

(On how losing Nash impacted the game) "Obviously it changes everything that we do. And really to Goran’s [Dragic] he played well I thought. We couldn’t make shots, and I don’t want to take anything away from them because obviously they’re a good defensive team, they’ve proven that, but we also had a lot of shots that in order to stay in a game like this we’ve got to be able to jump up and make. They’re shots that we’ve made for most of the year, which is why we’re one of the highest field goal shooting in the league as well as three point shooting. But, when we don’t make those then it puts so much pressure on your defense and we’ve struggled in that area, to be honest with you, that it makes it tough to stay in a game with a team that’s as hot as they are."

(On how long Nash will be out) "No, I’m sure they’ll do some more test and everything. The great thing is it’s the best that it can be right now because he’s got his feeling back in his legs and his arms and there’s some little things that are there but it’s the best scenario that I can think of right now, and obviously we’ll have to look more in depth to what it’s going to be or how long he’ll be out."

(On surviving the first quarter after Nash went out) "Yeah, I thought we did a good job. The 2nd quarter is where we really struggled. We didn’t make shots and we gave them 32 points and that’s where they got separation, then it’s kind of an uphill battle from there. They’re pretty good defensively; they’ve done a good job [this season]. [We] didn’t make shots against their zone, and that hurt. We’ve got to be able to jump up and make shots against zones. We’ve got to be able to throw the ball on the inside. And then I thought our zone did a pretty good job, but once again, an offensive rebound [given up] here and there, or we miss an assignment and [they] get a dunk or a layup and that kind of hurts us. As I’ve said, the thing we’ve got to strive for right is consistency. We’ve got to be able to know what we get night in, and night out. I’ve got a really good handle on what I’m going to get from Grant Hill, J. Rich [Richardson], obviously Steve [Nash] and stuff like that, but we’ve got to be able to establish some consistency with players four through nine, or four through eleven, or four through eleven, or whatever we’re going to play." 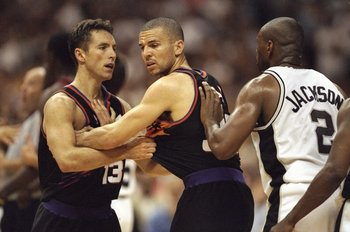 Teammates, just a few weeks ago...

(On the injury that sidelined him for the game) "I just bumped my head at a weird angle and had a spinal cord situation, lost feeling in my arms and legs. There were 10 seconds there that were really scary, but it came back, and they just didn’t feel like it was worth risking it tonight. We’ll see how it goes tomorrow, but I’m optimistic about that the amount that it improved already that hopefully I will be able to play Sunday or Monday."

(On the Suns’ play after his injury) "It seemed like we made a nice run for a stretch there, but then we got really stagnant and turned the ball over. They got easy baskets. What might not of started out as their night, they started to feel confident, and make shots. I think it went the other way where we maybe lost a chance and they started to feel in power tonight."

A Pre-Game Line (per Jaredfaul)

Always look on the Bright Side

From the AP Recap: The Suns fouled Mavericks C Brendan Haywood intentionally three times in the fourth quarter. Haywood missed five of six free throws before he was replaced by C Ian Mahinmi. The Suns tried fouling Mahinmi, who made four straight from the line. . Celebration for our third-worst Center, Beaches! [nsfw] 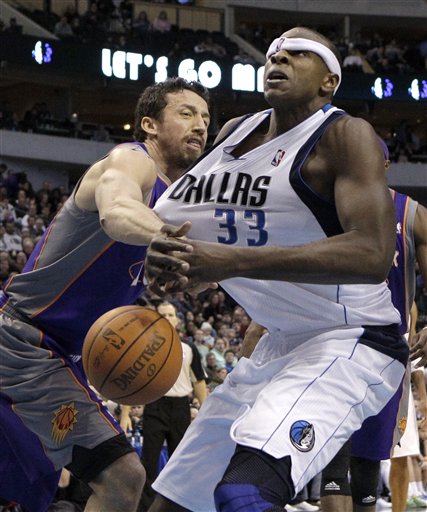 Brendan Haywood prayed for Nash, too,

Disclaimer: If you couldn't tell by now, all italic sentences are made up thoughts, not actual quotes. Also, Snow.