Share All sharing options for: PGQ Game 18 'A Statement Win at Home' € 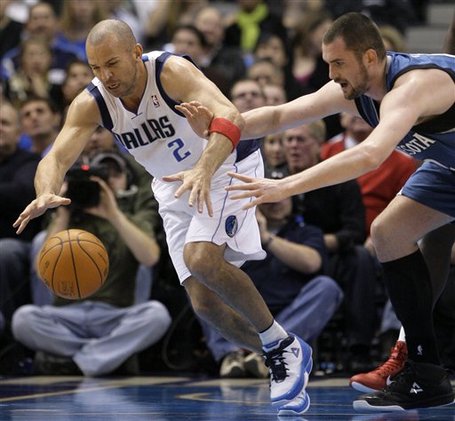 Wait, this could get me fired...let me rephrase that:

The Mavs (beat/lost to) [the Minnesota Timberwolves]¹ tonight (thanks to/despite) Dirk’s awesomeness. After all, he had his first turnover-free game in eleven tries. The (cloud in the silver lining/major culprit) once more was the lack of support from his team-mates, with the exception of Tyson Chandler/Jason Kidd². Especially useless was Jason Terry/Caron Butler/J.J. Barea/Shawn Marion/Brendan Haywood/Steve Novak³ and it is  THEY’RE ALMOST NOT ALL USELESS.

³ Two at the minimum, up to all five six of them. Keep reaching...

On a side note, no, you can't just preselect when and when not to kneejerk. 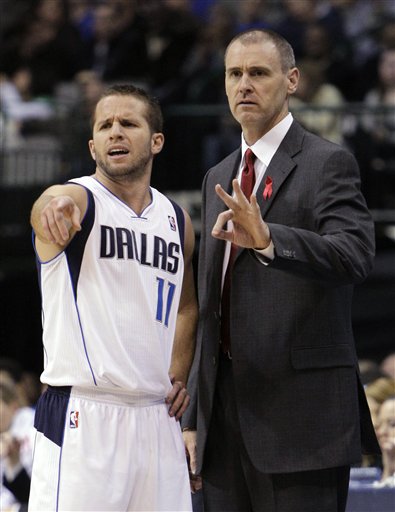 Barea: "Hey Coach, this Marion dude has taken 1 more shot than me!"

Carlisle: "Don't worry. He will get suspended, too."

(On winning by more than 10) "It's progress and we've got to continue it. I like this group a lot. We've been very business-like with our approach. Guys have taken nothing for granted. And they know how important it is to put opponents away when they have the opportunity."

(On fighting the Love) "That was a point of emphasis for the game. Everybody was focused on keeping a body on their man and knowing where Love was on the floor."

(On Wood) "I think Haywood did a terrific job. He was really active on both boards. His length again was a big factor. He was running the floor, and he was around a lot of plays around the basket. That activity is really important to us."

(You had a decent defense at this point last year, too. How do you feel about your team now?) "At the 18-game mark, I'm not going to get too excited. No one's patting themselves on the back around here."

(On the week) "Houston is beat up. Minnesota's a young team. We're going to get a different kind of a test on Friday night."

(On playing the Jazz next) "Utah is always tough to play. We haven't won there since I've been here, and I don't think we've been close. So, it's always a difficult game. And again, the important thing is being really tied together and rebounding the ball. It's similar to tonight, only it's a more experienced team and a team that's one of the really tough teams to play at their place." 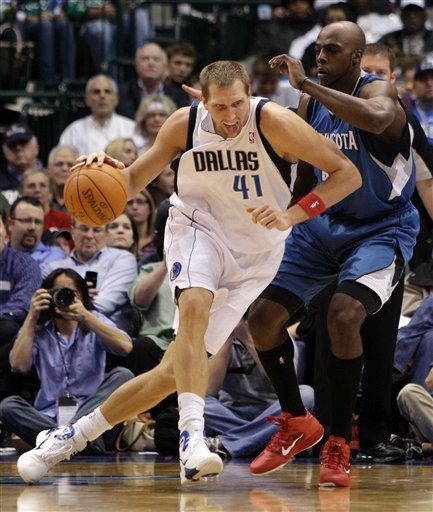 (On the Mavs O) "Offensively, just spreading the ball around. Everybody that came in the game tonight scored, so it was a great team effort."

(On playing only 24 minutes) "Great all-around support and I think our defense was solid again."

(On Carlisle's rotations) "It's almost been like clockwork. I think we found a pretty good rotation there, things work. Early on with Jet starting we had a little dropoff once the bench came in, but Jet being back to his normal rotation, and D. Stevenson is obviously making the whole thing work. It's been a good rotation and we've got to stick with it." 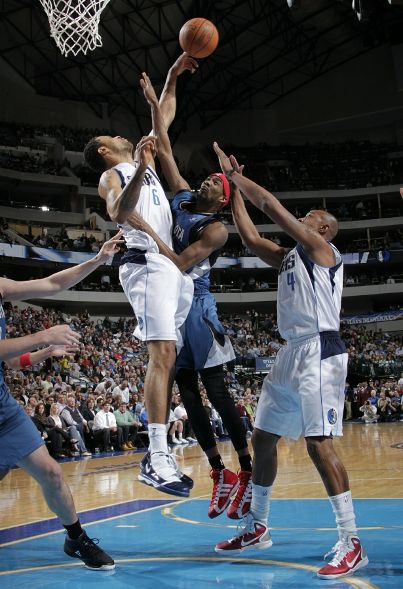 (14 Rebounds in a quarter, not too shabby, eh?) "I wasn't planning on that. But, I'll take all that. That works out even better.This way, i can demand MAX and a personal Herold presenting all of my Records before every Game."

(On a foul-heavy first half)  "I was more concerned with my energy level and the way I was playing out there. I play a certain style and my team thrives on it so I was a little upset at myself for allowing myself to get in foul trouble and not give my team the lift that I wanted to give. Even though we played great in the first half, I didn't feel like I gave the team what I normally give them. I felt like I had a bad first half. I didn't feel like I had brought enough energy. I committed some dumb fouls, and Coach Carlisle kind of got on me at halftime. So, I wanted to come out, bring some energy and be myself out there."

(On enduring Love) "I took it on as a personal battle, him coming in here. I love the way he's playing right now. And I knew for my team to have a good game I was gonna have to keep him off the boards and create some more opportunities for my team. So, it definitely gets you more excited when you've got a guy like him coming in."

(On Defense) "Back-to-back games keeping our opponents under 40 percent. That's the type of basketball that we want to play." 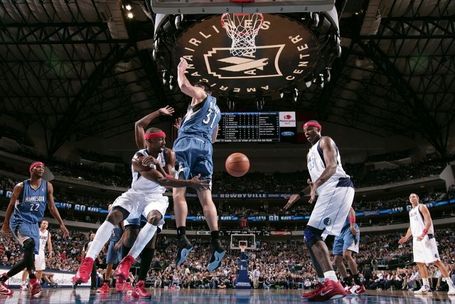 (On Love) "He still got a lot of rebounds, so it's hard to keep him away from the defensive rebounds. But, we wanted to eliminate his offensive rebounds and that just comes down to meeting him early, getting in hand-to-hand combat with him and fighting to keep him off the glass."

(On D) "We're never small out there on the floor. Whenever you're small, that allows teams to attack you on the inside. When teams see no true centers out there, they like to attack the basket. Whether it's me or Tyson out there, we're there to provide a presence in the middle and that's a big reason why defensively we're so much better this year." 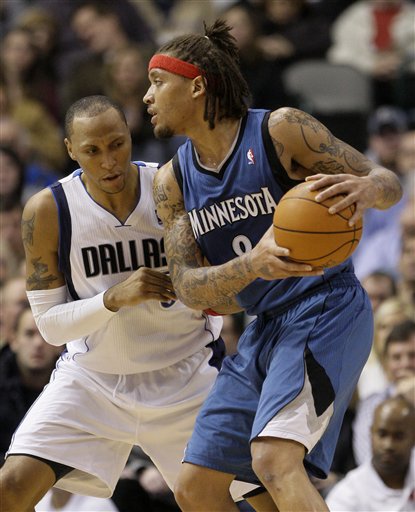 "Am i trippin' or does this ball look like a big bag of KFC?"

(On the missing homecourt disadvantage) "We've been trying to get a statement win at home. It's time for us to really let people know that this is our home court and they can't come in here expecting to get a win."

(On hitting 2-4 Threepointers) "Put me anywhere! Put me at the point! Those 3s have been there. I just have to shoot 'em."

(On Carlisle's rotation aka 'Be ready') "When you step on the court, you've got to bring it at the same level as the starters or you'll be back on the bench. It's that simple." 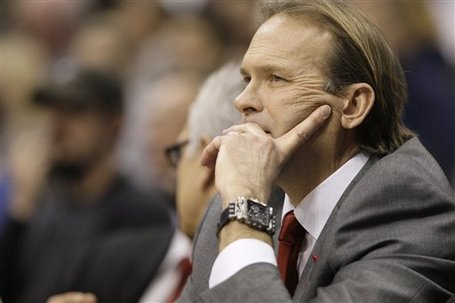 "Remind me to liquidate the mortgage for my watch."

(On the game) "We turned the ball over way too much, particularly in the first half. And guys got discouraged. Even when it got into the 10-point range in the third quarter, our guys still had their heads down, that was a little bit of a disappointment. So, the guys are young, they've got to get to the point where they do little things that turn the game in their favor."

(On being 4-14) "We've had a couple games now where we haven't played to our capabilities. And we've got to turn it around."

(On Telfair) "Bassy hasn't played as well in the last couple ballgames as he's capable of playing. It just seems to me his foot is bothering him a little more."

(On Beasley) "He has to do a much better job not getting those quick, silly, early fouls. It disrupts the rotation and his rhythm in the ballgame, too. It hurts any time any team loses a starter at that point in time." 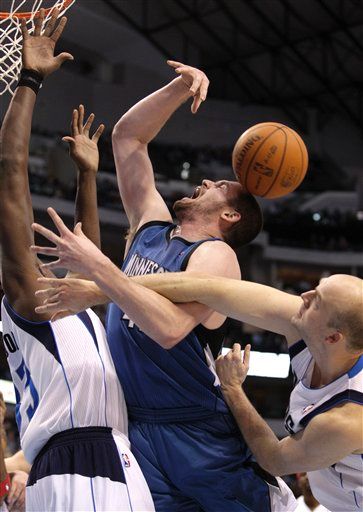 No Room for Love. 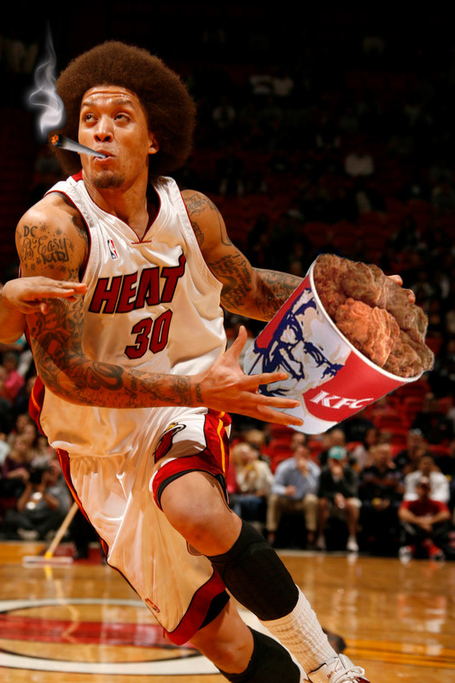 Those were the days.

(On his early foul trouble) "It hurt us. I'm the main part of the offense. When I'm not in the game, it hurts. I don't want to toot my own horn or anything, but we really don't score as much when I'm not on the floor. Me getting early foul trouble is hurting the team."

(On finding a rhythm) "Once you get that early foul trouble - sitting the first quarter, most of the of the second - it's kind of hard to get back in the rhythm of the game. I think it's like that with everybody, but you got to do it. I didn't."

Butler dooming us all (also via 2MG)

HOOPdata Boxscore (Minny turrible everywhere but the rim, yet limited to 12 attempts there; Mavs hit 15-26 from long 2. That is called hot jumpshooting)

Love will tear us apart 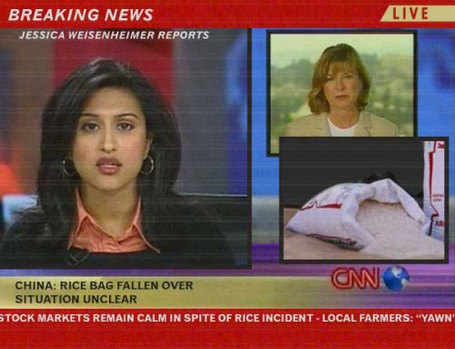 Brenson Chanwood registered 28 Rebounds, 16 Points, 3 missed FTS and one measly Block. That ain't the way you do me.

Disclaimer: If you couldn't tell by now, all italic sentences are made up thoughts, not actual quotes. Also, somebody keeps editing the Holy Fuck out of the KneeJerk Recaps. Literally. ALSO, 13, tomkanti. Barea has 13 for the year. Which leads the whole League.