PGQ Game 28 "The Belly and the Chest, a Sprite Moment plus a Msg from Larry - Pretty Cool", all in all €

Share All sharing options for: PGQ Game 28 "The Belly and the Chest, a Sprite Moment plus a Msg from Larry - Pretty Cool", all in all € 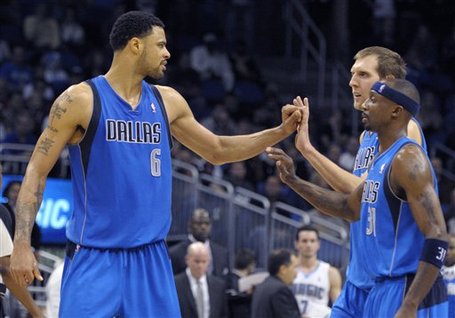 "Passing Larry Bird, huh? Well, you beat me at rock-paper-scissors, too, so RESPECT."

The Mavs (beat/lost to) [the Orlando Magic]¹ tonight (thanks to/despite) Dirk’s awesomeness. After all, he did not miss a FT. The (cloud in the silver lining/major culprit) once more was the lack of support from his team-mates, with the exception of Tyson Chandler/Jason Kidd². Especially useless was Jason Terry/Caron Butler/J.J. Barea/Shawn Marion/Brendan Haywood's FT Shooting³ and it is (GUESS WHAT) THEY’RE ALMOST NOT ALL USELESS. 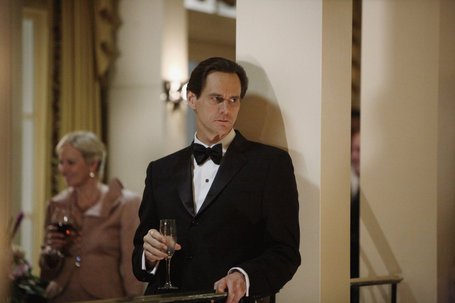 Rick Carlisle at the annual 'Private Friends and Fans Party' in the Barea Mansion, South Florida: "Roddy is threatening to come back before new year's eve? I'll have to prevent this..."

(A quick summary of the gameplan) "Howard is a monster. We get in foul trouble in here every year."

(On the Magic) "They had some really good stretches out there, but we were able to hold up over a 48-minute game. So, that was good news for us."

(On important things in life right after the win) "I just got a text message from Larry right as the game ended saying to congratulate Dirk and that he’s always been a huge fan. They’ve had a chance to spend some time together, so I’m sure he’s gonna text Dirk. And I’m sure that will be very meaningful to Dirk."

(On the Key) "The balance was really key for us tonight. Dirk is as great a player as there is in this league right now. But for us to do what we want to do and go where we want to go, we’ve got to have four or five guys in double figures and give him a lot of support. We had a lot of guys involved tonight.

(On keeping Kidd's minutes down) "In the big picture, we know there’s going to be an occasional 37 or 38 minute night. We’re always keeping these things in our mind and I don’t see any scenario where on a consistent basis we’ll be running his minutes up high.’’

(On The Christmas Break for the Mavs) "It was an important game for us. We wanted to get momentum heading into this break, so we’re happy." 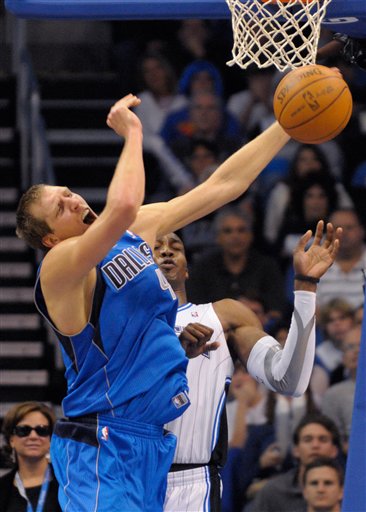 (On Magic's new roster) "We still know who they had. Dwight Howard is their focus. They have a bunch of shooters, Jameer Nelson and all those guys."

(Elaborate on the focus) "Dwight is a beast. He is tough to guard one-on-one."

(On his shooting night) "I actually started off kind of hot and then just never got going anymore."

(On passing Larry Bird in the Scorers List) "It's obviously an unbelievable accomplishment to be in the top 25 scorers in this amazing league with so many amazing players. But it's going to mean more to me when my career's done. When I'm 15 or 20 years from now, I can look back and it's something I'll be proud of. But as of now, I'm still chasing the dream and trying to win a championship. But it'll be a sweet one in 20 years.''

(On getting a congratulatory txt from Larry)  "That's pretty cool."

(On the Floridasweep) "Two great teams down here, but we're more focused on the road, more together on the road and we showed it the last two nights."

(On the Mavs Chemistry) "The best thing is the atmosphere in the locker room. Everybody is getting along with each other, we're having fun, we're making fun of each other all the time, we like being around each other. So, yeah, it is the best group I've probably been around in my 12, 13 years."

Tyson 'FG% might soon be higher than FT%, not sure if that's good or bad' Chandler 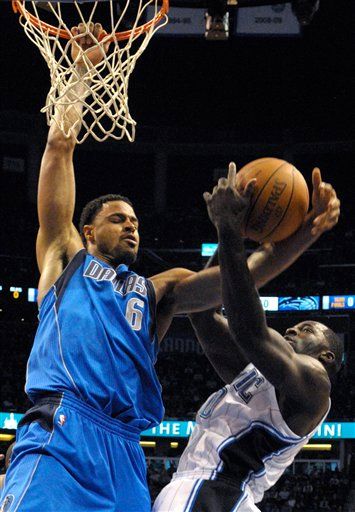 Hold on a second, i think i forgot something on my way up...

(On spreading the scoring wealth) "It says a lot about us. On any given night anybody can lead us. Dirk is obviously gonna lead us majority of the time in scoring, but our second, third and fourth options can come from anybody." 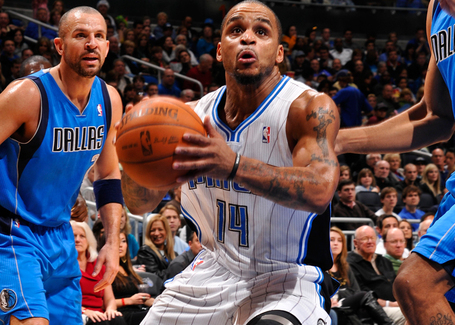 "You want a PG Battle, Jameer? Alrighty, then.."

(On Miami-Orlando) It’s huge. To come into Florida and win both games in 24 hours, that’s a nice way to go into this break.’’

(On pushing for Melo rental) "The Devil told you that!" 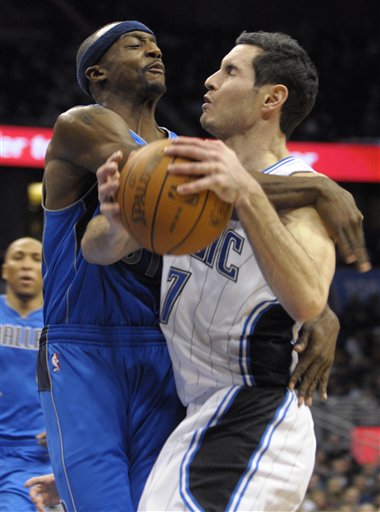 "So you played at Duke? Nice to meet you!"

(On Dirk Nowitzki) He is one of the greatest players to ever play this game, obviously. The greatest European, hands down. I’ve been with him seven years, and I’m amazed by what he does out there. His work ethic has put him up there with the greats, and he will be a Hall of Famer." 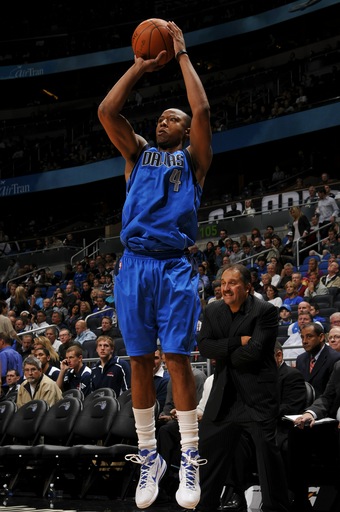 (Ever been on a team with such good chemistry?) "Nah, never. Everybody's just pulling for one another, and we're doing a great job collectively of closing games. You kind of know your minutes, the rotation, so guys are just really playing hard during the course of those times and capitalizing on the opportunity."

(Swaggertalk pls) "We feel like we're one of the best teams in the league, if not the best right now. We're playing great basketball, so we want to capitalize on every opportunity." 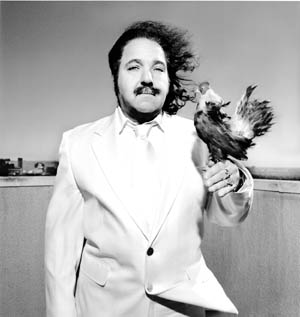 Yeah, it is what it looks like it is. Get over it, Buckets.

(On the game) "I thought there were a lot more positive things to build on Tuesday night than Monday night. I thought we did some things very well. Our ball movement was better and we didn’t have much trouble getting good shots. We tried hard defensively most of the time, but I don’t think we’re very good defensively right now. But I think we can cure a lot of that over the next couple of weeks. And I like the way we fought in the fourth quarter.’’

(On the new dudes) "None of those guys are shooting the ball very well right now. I don't know if it's being in a new situation or putting too much pressure on themselves. All three of them are struggling to shoot the ball."

(On Dwight) "He’s been fabulous. His energy and effort were off the charts. You can’t ask him to do a lot more than he’s doing. He’s working really hard down there." 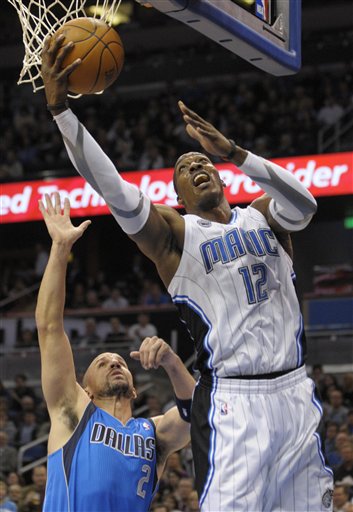 He almost lost the battle for this particular rebound.

(On Hedo returning) "We’re trying to go back to how we were playing a couple of years ago with Turk, but it takes time. Once we get our timing down again, we’ll be tough to stop.

(On Turkoglu’s missed dunk) "He didn’t get fouled on that play. He had a Sprite moment. I’ve got to get Turk in the weight room on Wednesday and work on his legs so he can finish that dunk.’’

(On Orlando) "We are a team that can win a championship. We believe that and we just want everybody to be patient. We understand that right now we’re not going to be the best team in the NBA, but we’re working toward that. So we’ve just got to be patient, everybody – fans, media and coach. We’ve got a new roster and these guys are excited about playing here. It’s not going to change our goal and our mission to win a championship."

(On Chestbumping StanVan) "That was Stan’s first ever chest bump in a game. Well, really it was his belly and my chest.’’ 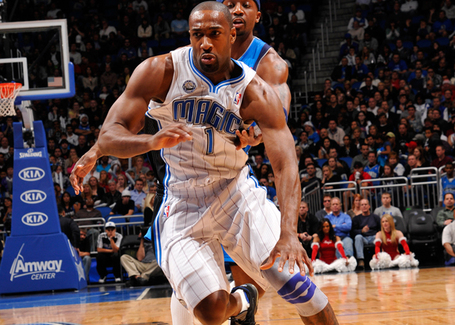 Everybody looks ripped in those magic jerseys.

(On adjusting) J-Rich got his 'finally’ moment [tonight] and hopefully I’ll get my 'finally’ moment soon. The thing is it’s really now about now for us; it’s about four months from now (in the playoffs).

(On bricking his shots) "The guys have been great about telling me, 'Shoot the ball', but I’m still trying to fit in and not stand out too much right now. It’s really a confidence thing with all three of us. Once we get our confidence up, we’ll see where it goes from there. Dwight is out there playing phenomenal and it’s up to us to give him some help.’’

'Put your foot in your mouth, pls'-Part

(On getting Traded) "I noticed some things in Washington and I knew I was going to be out of there pretty soon. It was just don’t do anything to get banned like [Washington Redskins defensive tackle Albert] Haynesworth did. I was just walking on eggshells and I didn’t do much at all."

(On the ovation he received from the Amway Arena) "The building, with the atmosphere and the love from the fans, it was amazing. I got that out of the way and now I can focus on just making shots. - I didn’t do anything here for them to boo me. Well, except for shooting 17.6% from the field.’’

(On playing top teams Atlanta, Dallas, San Antonio and Boston in his first games with the Magic) "I was hoping I came in on games against the Bobcats and teams like that. But it’s not working like that. But these games measure where we are now and it tests us."

Hoopdata Boxscore (lnteresting: Dirk shoots 53% from 16-23 ft for the year, but went 3-17 in the last three games. Gilbert Arenas is shooting suing for copyright infringment ) 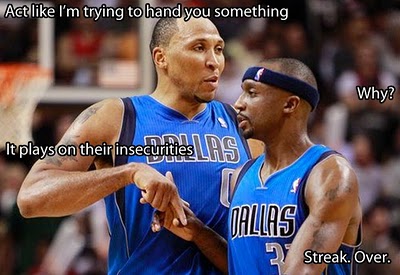 Haywood 0-2 from the line. . Celebration for our third-worst Center, Beaches! [nsfw]

Bonus: From the AP Recap

Orlando did show some zip with a a 17-2 run between the first and second quarters. The spurt was sparked by Arenas and Clark -- and, surprisingly, with Howard and Jameer Nelson on the bench -- and pushed the Magic ahead 31-29, with Howard leading a chest-bumping bonanza with every player and even Van Gundy during a timeout.

Turned out to be a premature celebration.

Disclaimer: If you couldn't tell by now, all italic sentences are made up thoughts, not actual quotes. Also, a Marie Sighting. Marie, Marie.