Share All sharing options for: Mavericks @ Thunder - PGQ Game 29 "Don't blink, it's a Flashback for Marion!" 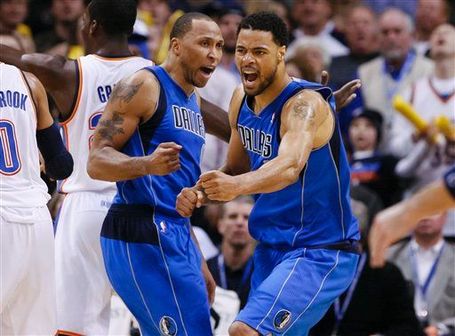 The Mavs (beat/lost to) [the Oklahoma City Thunder]¹ tonight (thanks to/despite) Dirk’s limited awesomeness. The (cloud in the silver lining/major culprit) once more was the lack of support from his team-mates, with the exception of Tyson Chandler/Jason Kidd². Especially useless was Jason Terry/Caron Butler/J.J. Barea/Shawn Marion/Brendan Haywood³ and it is (GUESS WHAT) THEY’RE ALMOST NOT ALL USELESS.

² Only one of them, mind you. Chandler missed a FT, so the choice was easy... 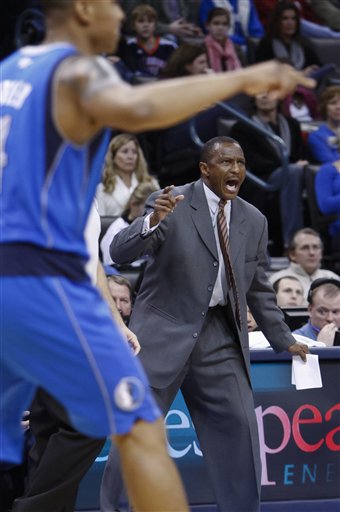 "What would i give if i had Brian here with us!!"

(On the win) "I thought the guys pulled together. They really did an excellent job of pulling together and banding together. It should be a confidence booster for a lot of our guys, because they came into a tough situation and everybody had to step up a level with Rick not here, Brian not here and Dirk out. I also miss my Cat. Anybody seen her?"

(On the start of the game) "I was concerned about a rest or rust issue in the first quarter, and we came out and played one of the best free-flowing first quarters we’ve had in a long time. And that kind of answered that question."

(On Trix) "Shawn Marion had a heck of a third quarter. I think he had flashbacks to his All-Star years. That quarter was huge."

(On Lex 'the Jinxa' for 3) "That three Ajinca hit was either gonna be an airball or a swish, and luckily for us it was a swish.That was a huge shot for him and a shot in the arm for our guys."

(On Kidd's near Tripledouble) "Jason Kidd directing everything and running the show willed us to a victory."

(On the 4th Quarter D) "Holding a great offensive team to just 12 points in the fourth quarter was huge for us. And offensively we found a way."

(On Terry's waving and jousting with the fans) "That's just Jet's way of juicing himself up.''

(On general Mavs cockiness) "I don't think it was an attitude. I think the guys were so excited. We were down without Dirk. We were searching to get the ship back balanced again. Rick wasn't here. There were just so many things going on at that time, I thought that energized us. They have a great crowd here at Oklahoma City. They get going and yelling and screaming and it kind of got us juiced up. It was all in good fun, but I thought it helped energize us going down the stretch." 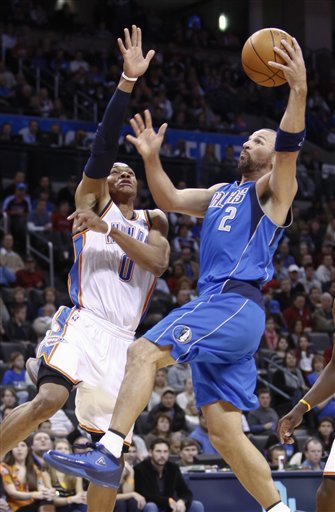 I'm sorry but that should be physically impossible. Shame on you, Russel.

(On the Mavs) "With guys out and Coach Carlisle out, we could have easily said, ‘We’re here just for show.’ We have a bunch of guys who are on a mission right now. No matter who was hurt or who was not here, we had to go out and play and give ourselves a chance to win."

(On Dirk going down) "This is a veteran ball club and we’ve pretty much seen everything. Dirk is very reliable and durable. But when he left, I don’t think anybody blinked. I think everybody just stayed the course." 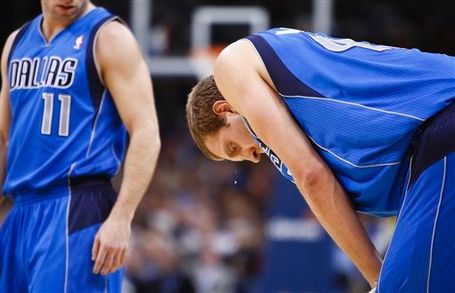 (On the Win) "It was an amazing win. I was back here yelling so loud. It was an unbelievable second half; guys stepping up left and right and making big shots; defense in the fourth quarter was amazing. I think we allowed just three or four field goals. It's just what we've been working on basically all year long - defense wins the game. This is a great, great team effort. I’m proud of the guys."

(What happend) "I strained a little muscle in the back of my knee. But we don’t really know everything yet. I had X-rays and everything came back good, but I’ll have an MRI done tomorrow morning. And then we’ll go from there."

(On his knee) "It's been bothering me for a couple weeks, but it wasn't bothering me to the point where I had to do anything about it. But I strained it a little more than it already was, I guess."

(On where the injury happend) "It was just on the landing. I’d take an ankle sprain over this any day. This is a weird injury, I’ve never had it before. If it were a rolled ankle, I would have went back out there. I’ll look at it and see what it is tomorrow. I’m kind of day-to-day at this point." 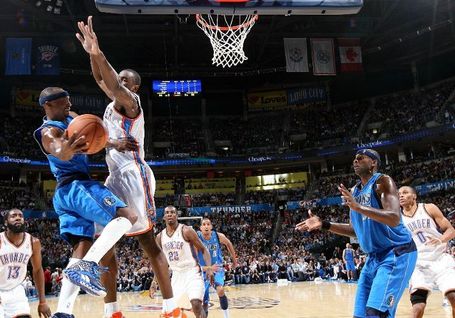 Just look at their faces. It's like they see a man giving birth...

(On winning the 4th) "Once we kept it close I knew that, in this hostile environment, we’d have the upper hand because we are a veteran team and we’ve been in this position numerous times."

(On winning without Dirk) "It just shows you how deep of a team we are and the veteran leadership that we have."

(On the Fans) "Dallas is No. 1, and OKC is a close second as far as the best fans in the NBA. It’s unbelievable. They’re here early. They stay late. They’re cheering. They’re just unbelievable. And it’s great to know that in a small market like this you have die-hard fans. They’re some of the best."

(On OKC) "They’re still a great team. That’s a good young team there. They’re missing one or two veterans and that’s about it. But, hey, Oklahoma City, they’re tough."

(On attracting the fans' animosity) "At that point, you're trying to do anything to get yourself going and I just use that to get fired up.''

(On Dirk) "You hate to see the big German go down. We went in at halftime and Dirk asked what the score was. We told him it was tied and he said: 'You guys can handle this, I'm taking the rest of the night off.' ''

(On Attitude) "To a man, to a man, if you look at us. Look at DeShawn Stevenson, his toughness. You know nobody's going to go up against him. Jason Kidd, Tyson Chandler, Dirk's obviously tough, Caron, Shawn Marion. These are tough-minded individuals. And I think that's where it starts. I think that soft label has long shed us. I don't think they'll ever call us that again." 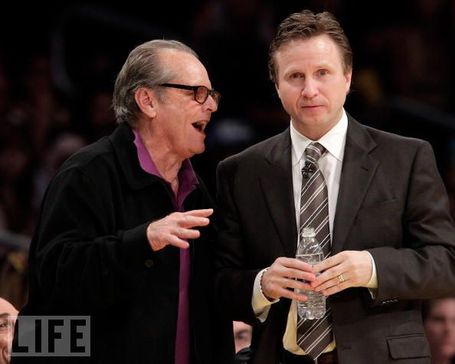 "Are you interested in some Truth? Your Defense just isn't as good as last year. In fact, it's 3 points per 100 possesions worse."

(On the Mavs winning with Defense in the 4th) "I knew this team was a defensive team. They have the record of 24-5 because they have a talented group of guys that play well. Dirk is one of the best players, but he isn't the only guy on their team."

(On the Zone) "When they went to the zone we were running our zone offense, it was just we were settling for jump shots and when your jump shot is not falling you’ve got to go inside to get the outside and it’s something we’ll look at and try to figure it out. The next time we play them, I’m sure we’ll see it. That’s part of the growth of our team, is figuring out how to score points when we have a cold stretch and figuring out how to get stops."

(On Terry) "We were chasing him but not chasing him hard enough. That’s something we will look at and focus on and try to get better at."

(On the Loss) "We just picked a bad time to miss shots. They did a good job of making shots in the fourth quarter."

(Could you have done anything different?) "There was nothing else you could do other than make shots in the fourth quarter." 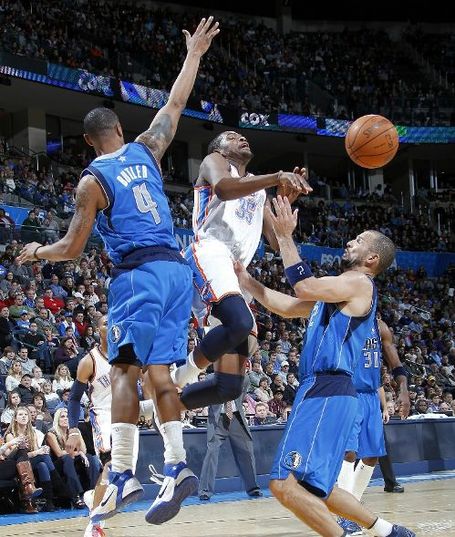 Kevin Durant, after realizing that both Mavericks Defender here outweigh him.

(On the Mavs) "They still have a lot of weapons. Jason Terry, Caron Butler and Shawn Marion are all great players. It is more than just Dirk. They played tough, man. You’ve got to give them credit for making big shots."

(On the Loss) "It's frustrating. We forced them into tough shots. They made big shots we didn't. We missed some open threes. ...We've had nights like these. It happens. It's part of the League, we gotta move on."

OKC PostgameClip (notice how Durant always says something to the effect of "Can't win em all, got to move on" after a Loss to Dallas)

Marion Courtside after the Game

Haywood didn't miss from the line.. because he had no FTA's. . Celebration for our third-best Center, Beaches! [nsfw]

Disclaimer: If you couldn't tell by now, all italic sentences are made up thoughts, not actual quotes. Also, Remember that vid with all the explosions to the music of The Prodigy - "Thunder" ?