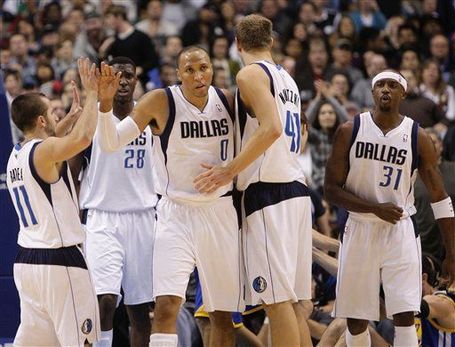 In the last ten years, this game marked the second time Dallas held an opponent to 6 (or less) made Free Throws while hitting 20 (or more) of their own. If we add 13 (or more) Opponents Free Throw Attempts as a criteria, it's, well, a first. Congrats Warriors. You just made history.

The Mavs (beat/lost to) [the Golden State Warriors]¹ tonight (thanks to/despite) Dirk’s awesomeness. The (cloud in the silver lining/major culprit) once more was the lack of support from his team-mates, with the exception of Tyson Chandler-DNP Jason Terry/Jason Kidd². Especially useless was Caron Butler/J.J. Barea/Shawn Marion/Brendan Haywood/Yawn/Alexis³ and it is (GUESS WHAT) THEY’RE ALMOST NOT ALL USELESS.

³ Two at the minimum, up to all five six of them. Keep reaching deep into... 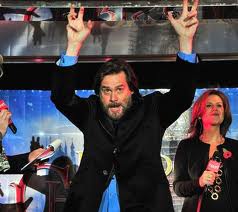 (More on Mahinmi) "Look, this is Mahinmi. He is ready. He was ready in the San Antonio game, he was ready tonight. This seemed like the type of game that he would really be suited for because of his quickness and their quickness. So, he was big."

(Even more On Mahinmi) "He competes hard in practice. In games like tonight, he makes a strong case. I am not by any stretch saying Haywood didn’t play well. I thought he did a good job, too. After all, Brendan is our fourth-best center, at the very least. I just thought Ian’s energy level was the real difference-maker in the game."

(On the other frenchman) "Tonight, Ajinca went in there and did a little of everything. He rebounded. He blocked shots. He hit a jump shot. He was active around the basket offensively. So, you can see why we’re very excited about the future of the team with those guys."

(On the fourth) "We needed to get some stops. It wasn’t that we were playing that horribly defensively, it was just that they were an aggressive team. They were making plays and they put the ball in the basket. Offensively, we kind of struggled all night. We didn’t hit a ton of shots, but in the fourth we were able to get it going. Our ball movement was better. Our penetration was better. Our balance was better. And we were able to get a bit of a cushion." 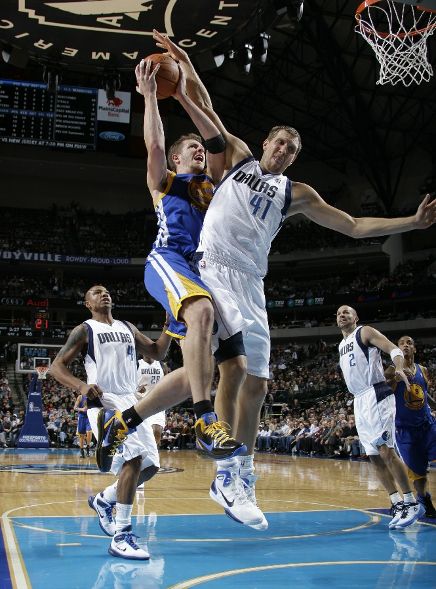 (And how was their night?) "Awesome." 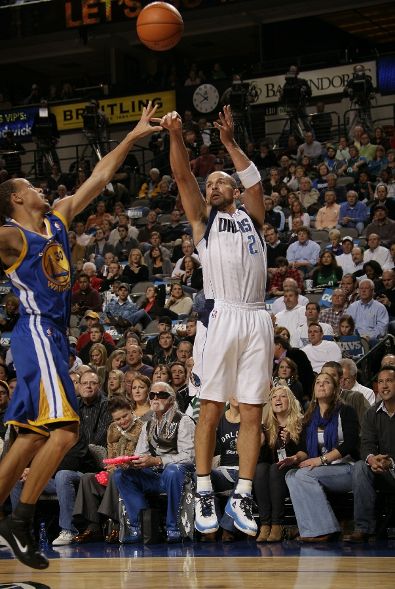 "Bricks and Boards, that's how you build houses, folks."

(On the two Frenchies) "I thought Lex was the big one. We've seen Mahinmi do this, but Alexis stepped in and got six rebounds, blocked shots and made a couple of shots." 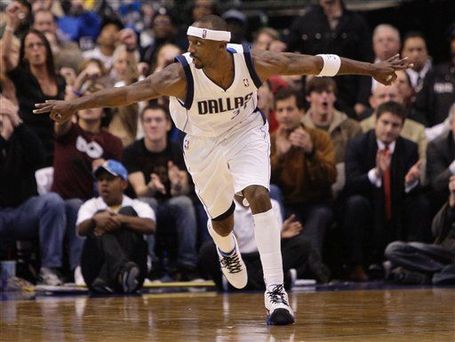 (On the Frenchies producing) "That's what I've been seeing since training camp, what I see in practice."

(Where does this come from?) "The coaching staff does a great job with our younger guys. They put in the extra work, and obviously you saw the production tonight. And it’s all predicated on hard work."

(On the Nets & Avery next) "It’s gonna be tough. But then, when the lights are on and we tip it off, it’s time to go to work. It will be fun, but it’s gonna be a long night." 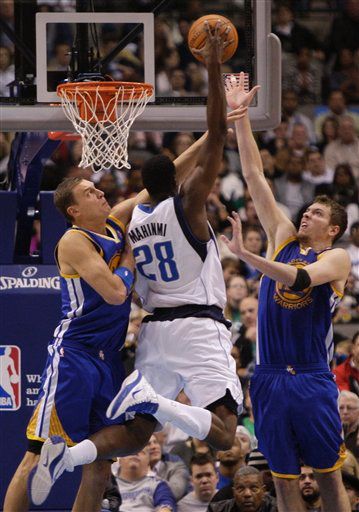 You should be able to dunk that.

(On the fourth) "We played with great passion in the fourth quarter, especially on defense. I will always remember my first double-double."

(On the French tag-team) "Hard work pays. We're going to keep doing that. It's great for both of us."

(On getting some clutch-stats @ 82games.com) "It was definitely a great feeling to be on the floor to the last minute. I get more experiences. That's what I'm looking for."

(On playing well) "It’s always a good feeling to play well, especially when you get the win in the end. So, it felt great. We did a good job as a team and we just stayed together."

(On extended minutes) "It’s great, especially for a guy like me. I’m looking for that kind of opportunity and for me to be able to come out and, not knowing when I’m going to get my playing time, it’s good. That means that all the work I do on an everyday basis works. So I’m going to keep doing what I do and hopefully get more playing time."

(On Chandler being out) "It was kind of the perfect game for me to get in."Obviously this morning at shootaround, I kind of knew that Tyson would be out tonight. So, I talked with Coach Carlisle, and it was definitely a good feeling that I’d be able to play against those guys." 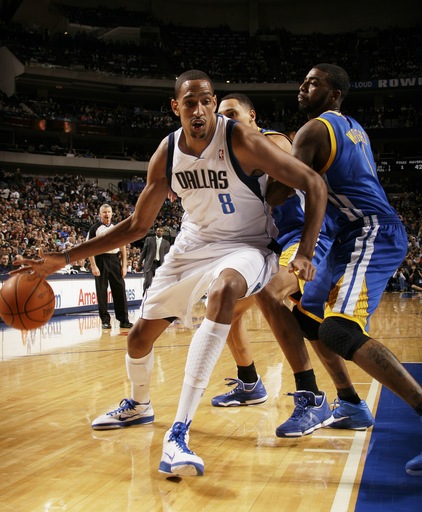 "Hey, this is pretty easy!"

(On the Win against the Warriors) "I don't know if you guys have been paying attention, but I guess French guys don't like Golden State. Last year, Roddy got 40 points on them and tonight, the other French guys did pretty good. That's kind of funny. Hopefully, this isn't the last time we get to do this."

(On Carlisle's 'BE READY' mantra) "I’m always ready. Even if I don’t play, I still work pretty hard before the game - coming before everybody, doing some running and trying to be ready all the time - because you never know what’s gonna happen." 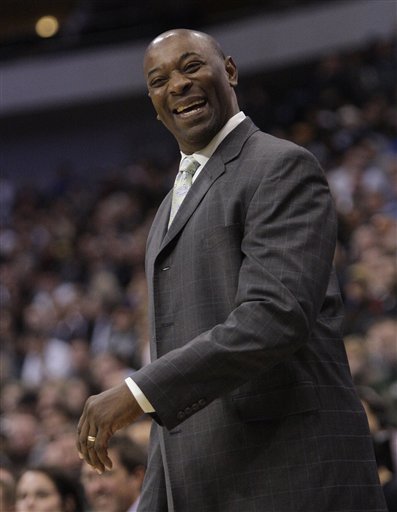 "Dayyum, how can you miss more than half of your FTS!?"

(On the Dubs) "We're not getting the results as far as the wins we need, but we're playing hard. When we put it all together, we'll be a good team. Our hearts are in the right place. We practice hard and compete. We're right there with a lot of the top level teams. We'll turn the corner if we play with this kind of effort."

(Were you surprised by the Impact that Mahinmi....) "Oh my Goodness. We know he was on the roster. And we know he was a talented player. And sometimes...and injury or illness to a player, someone moves up the chart. ... I thought the young man did a great job. Impacted the game with his length, impacted the game as a good free-throw shooter and made plays. Rebounded the basketball, gave them second opportunities, getting the ball and tapping it out. [We] didn't plan on that, because of course you plan for Tyson Chandler be playing. But nevertheless, young man that has been working around the league and got a chance to get his full minutes and maybe this helps his minutes later on. " 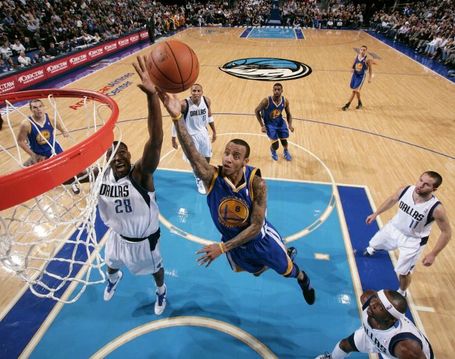 Mavs Defense sans Chandler: Standing, watching, waiting for some foreign dudes to bail you out.

(On tonight's game) "We played hard all 43 48 minutes. We just made careless mistakes at the wrong time. Just mistakes that were made trying to make the right play. I think this was our only game this season where we actually played 48 minutes. It was a tough battle, we knew what we were coming into and I think we played great. But, that said, we just made mistakes at the end to make it a burden on us." 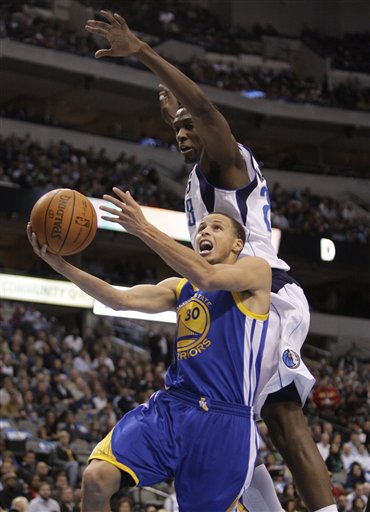 (On tonight's game) "We fought the whole game to try to keep ourselves in it and then they hit a couple big shots in the 3rd quarter, got some separation, but we were able to stay in the game. We’ve got to be smarter down the stretch, we made a couple of careless turnovers. I think we were down 4 and had the ball with a minute-and-change left and could’ve gotten it to one possession and I gave the ball away. So, little plays like that lose the game for you and ruin all the hard work we put into trying to win on the road against a great team. It’s a learning experience for us, too."

(On competing against a good team) "We compete with every team in this league we just have to figure out how to get the results out of it. We’re all getting better each game, it’s just a matter of putting it together for 48 minutes and working bits and pieces as a matter of getting our whole performance together. We’ve got another chance tomorrow."

(On the team's fourth-quarter turnovers) "Little plays like that can add up and you lose your possessions. We’ve just got to be more on the same page down the stretch, and get into our offense, and make sure we know where each other is on the court and make the right play. So, that’s something we’ve got to do or die."

Hoopdata Boxscore (Ok, so both teams had better EFG% from short-, mid- and three-range than at the rim. Conclusion: If you can't make layups, shoot jumpers instead. Niiiiiiiiiicceeee.)

Ps: The Mavs are trying hard to lose. Eventually, they will succed.....will they?

Disclaimer: If you couldn't tell by now, all italic sentences are made up thoughts, not actual quotes. Also, Religious Intercourse.