The 21 Most Surprising Things 21 Games In

Share All sharing options for: The 21 Most Surprising Things 21 Games In

It seems like the season just started, but it is actually about a quarter done. The Mavericks have played 21 games so far, and there have been more than a few surprises. The biggest is probably the 17 wins, already possessing victories over every elite team in the Western Conference excluding the Lakers, who have not been played yet (January 19th will be the first meeting). Being good was not a surprise, but so far this season, the Mavericks have been great.

But what else has been surprising? Well, assuming the 17-4 record is the first, here's twenty more, one for each game that has been played.

2. The only two players on the Mavericks shooting over 40% from beyond the three point line are Caron Butler and DeShawn Stevenson. Before the season, the obvious people would be Dirk and Kidd, maybe Terry or one of our three point specialists, Cardinal or Novak. Now, a quarter of the way into the season, a 31.5% three point shooter is shooting 42% and a guy who we thought was a 12th man at best is 2nd in the league shooting 51.1%. I doubt either of these percentages can be sustained, but if both of these players continue to keep their attempts down (in other words, keep taking good looks), I wouldn't be surprised to see just a 5% drop from where they are now.

3. 26.7 mpg for Tyson Chandler to only 19.7 mpg for Haywood. While clearly Tyson Chandler's dominance at the five is almost being taken for granted now, at the start of the season it was a complete shock to just about everyone that he was going to be our starting center. A simple stat, but perhaps one of the most surprising ones on this entire list at the time we found out of it. Its hard to disagree with the coaching staff now, though.

4. Let's go crazy with a few Chandler stats. Because of his 80% free throw percentage and 67% field goal percentage, he is currently scoring 2.2 points per shot. That's easily the best for any Maverick. He's also 6th in the league with a 19.9% rebound rate, 4th in the league in defensive rating (per basketball-reference.com), and 3rd in the league in Win Shares per 48 minutes. Remember, this was our trade chip/backup center, folks. We traded Erick Dampier, Eddie Najera, and Matt Carroll for him. Good work, Donnie.

5. The surprise here is that I had on clue what to expect. Its good to see Jones have strong showings from the field and, in limited attempts, from beyond the arc, as is the 19 free throw attempts in just the three games he's played.

6. We have more French players than you do. Did you even know there were 11 active French players in the league (check out the former French NBA players too...couple of ex-Mavs in there, and not of the successful variety)?

7. Staying with the center position, 8-32 is pretty shocking. Haywood, whose free throw percentage had once been as high as 74% in a season, has been a disaster at the line, and absolutely blowing away his career lows in that mark. Unfortunately, I think it completely has to do with his confidence, and unless he gets his starting job back soon, I don't see it, or his free throw percentage, returning to a high level.

8. Nothing Dirk does should surprise any of us anymore. Still, at age 32, its not normal to expect a superstar taking 17 shots attempts per game to be shooting 55%. That's just incredible. If Dirk keeps this up, he will be just the 5th player to take seventeen shots and average 25 points while shooting over 55% (the other four? Karl Malone, Shaquille O'Neal, Kareem Abdul-Jabbar, and Adrian Dantley).

9. Rick Carlisle's prison look? That was a surprise. 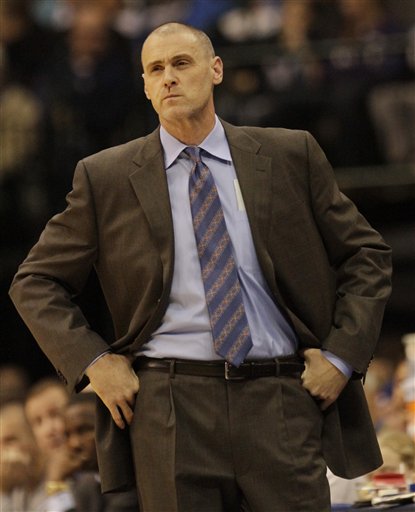 10. This was a little surprising at first, because of how awesome it is. You should go watch it.

11. The effectiveness and frequency of the zone defense was not at all what I expected, but its hard to argue with its results. It is not a shut down defense, preventing buckets, because there will be times where it will completely break down. However, the unique look can make smart players making simple plays do something really dumb, usually resulting in a turnover and possibly easy points by a guard leaking out. That's where the zone's usefulness lies.

12. It's a complete shock to me that 17-4 places the Mavericks in 2nd place in the Southwestern Division. Props to the Spurs for their great start as well, and while I don't expect them to maintain it due to age and the injuries that always seem to happen, I'm sure many of them feel the same about us.

14. I don't find as surprising that the Mavericks have busted five streaks of five+ wins than that they've actually played five teams with five+ win streaks. Through their first 21 games last year, the Mavericks did not even play one team who had won 5 straight at the point of the contest.

15. Are you surprised about the fact that this was ever a story at all? Not what I expected, and it kind of came out of no where. Still, no doubt that McCants is a great talent to have, and certainly has a great chance to make it to the major leagues this year, be it Dallas or elsewhere.

16. Jason Terry, so far, has definitely bounced back from his disappointing season last year. He's actually averaging slightly less points, but he's scoring more efficiently, with his FG% jumping back up to the 47% that has been common to him as a Maverick rather than the 44% he shot last year, he's making an effort to penetrate and create more, as evidenced by his 4.7 assists per outing, almost a whole assist more than last year, and he's also shooting less three pointers, which is good, because his percentages show he is no longer an elite three point shooter, but a good one who probably takes more than he should. I know he's a hot and cold player, but he has already had one cold streak this year, so these stats may very well be what he ends the year with.

17. Terry's defensive effort has also been a pleasant surprise. He's still a 6'2" shooting guard, and that's impossible to change, but it seems like he's giving more effort. He also appears to benefiting greatly from the zone, which gives him some freedom to roam the passing lanes and double team when he sees opportunity. As a result, he is averaging 1.7 steals per contest, which is on pace to be the 2nd best total he's ever had. Also, for the first time since Kidd has been a Maverick, he is not the team leader in getting steals.

18. Shawn Marion is having another solid season. I know it seems annoying when he decides to shoot a miss no-backboard floaters from 4 feet, but he's giving the Mavericks 10.4 ppg on 48% shooting, 6 boards a game, and great defense, as usual. I'll be honest, though, I never realized that he could do this, too.

19. Props to Rob Mahoney for the breakdown, but never, ever, ever did I expect Tyson Chandler be a deadly sharp shooter from deep. Okay, I might have got a little carried away with that, but this defies every law of Maverick center ever. If they can shoot, then a Mavericks center must be short, white, and slow. If they are athletic and over 7 feet, then they can't shoot. To be fair, I remember Haywood hitting a couple jump shots as well this year. However, I have yet to see either of them match Dampier's corner three ball.

20. I know Jose Juan Barea has not been the most liked Maverick, for various reasons. However, I doubt anyone could have expected him to start the season shooting 15% from three point range (half his career percentage and over 20% worse than last year's shooting). It's not just his three pointer, though, but his jump shot in general. He's making just 24% of his 16-23 feet jumpers, down from 45% last year. That's pretty horrendous.

21. One thing I did not expect from Dirk was him increasing his three point attempts. While past seasons of Dirk would scoff as his mere 2.0 attempts from deep this year, it is half an attempt per game more than last year. Dirk's attempts seemed to be declining steadily, but this year, he actively seems to be looking for that long range shot, which is more often than not wide open. The Mavericks also have appeared to find money on the corner three ball for Dirk, which he is drilling whether there's a defender in his grill or not.

Unfortunately, I'd like everyone to refrain from asking for an end of the year edition, because I'm afraid that by the time I got to the 82nd most surprising thing, I'll be talking about Steve Novak playing 1161 minutes for the Clippers two years ago and only shooting 23 free throw attempts. Surprising, but not particularly relevent.