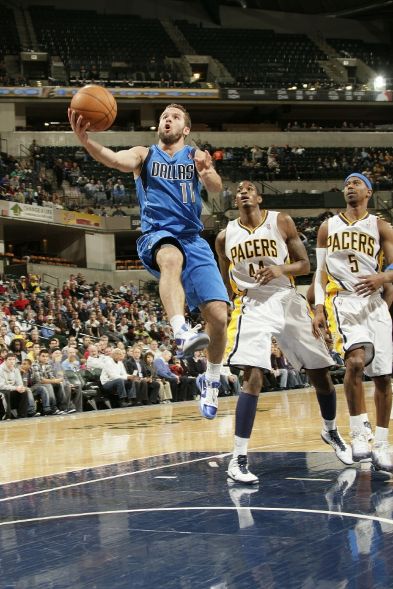 Looks good? - Well, if you disregard the higher Goals, maybe.

But still, it gets you outscored by a dozen.

The Mavs (beat/lost to) [the Indiana Pacers ]¹ tonight (thanks to/despite) Dirk’s limited awesomeness at the sidelines. The (cloud in the silver lining/major culprit) once more as usual was the lack of support from his team-mates, with the exception of Tyson Chandler/Jason Kidd². Especially useless was Jason Terry /Brian Cardinal/Jose Barea/Shawn Marion/Brendan Haywood³ and it is (GUESS WHAT) THEY’RE ALMOST NOT ALL USELESS. 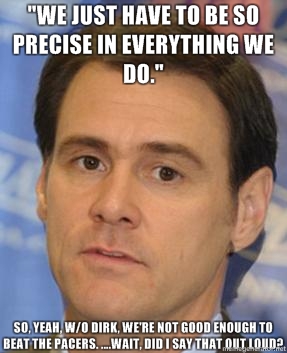 (On using Excuses) "We don’t have Dirk, so it’s not a topic that’s worth discussion. We’ve got to win with the guys we have."

(On Indiana's Game) "They played well. George Paul and Rush Brandon were the two guys that really hurt us. You have to give them credit for their shot making. You know your defense can always be better. Right now for us I think the key word is precise. We just have to be so precise in everything we do. For instance we only had 12 turnovers and it leads 14 points and that’s a huge number. Everything that happens, every possession is precious. We just have to keep pushing. "

(On the Pacers) "I like the team a lot, I do. What Larry’s done, they are extremely well positioned financially cap-wise. They’ve got a terrific young nucleus of players. Granger’s an All-Star. Their bigs are really good and solid and will get better, and their wing players ripped us tonight. Their point guards are really good too."

(On starting Lex) "Length is one of the strengths of our team. Ajinca has been practicing well. He’s a guy that can shoot the ball and stretch the floor. He gave us some good minutes to start the game. He’s a young player that needs a shot. He got one tonight. And as we move forward, everybody is live for an opportunity."

(On loose Balls) "That hurt. And again, it’s just that extra inch. We were this close to getting that extra rebound and being in transition, and they’d get a longer fingernail on it than us and then they’d get the ball back. And the thing is right now, when shots aren’t falling, we can’t allow that kind of frustration to carry over defensively. So far, we do. We’ve got to keep playing and we’ve got to keep getting stops. That’s what the game is about for us."

(Conclusion) "We can do better. I think from the film we’ll find that there are some areas where you can always try a little harder. And hey, we’ve just got to keep pushing forward with the group we’ve got." 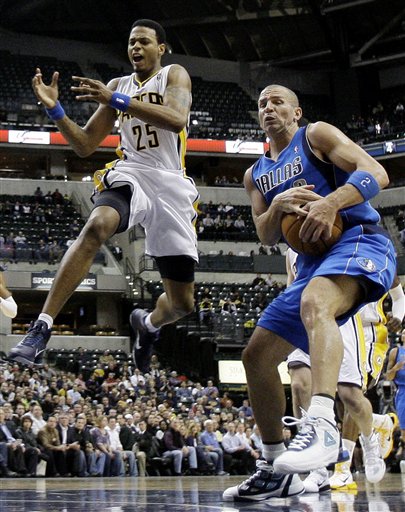 (On the difference in the game) "We couldn’t make shots when we needed it. And on the other side we couldn’t get stops when we needed it. That's a bad combination. The Pacers made shots. They moved the ball and they got big scores when they needed them, especially in the fourth quarter. So, they were the better team tonight."

(On the Pacers) "They’ve got a lot of young talent. They’ve got a good coach. This is a great basketball city and as time will push forward they can be an elite team once again."

(On moving into 3rd place alltime made threes) "The big thing is I’m starting to hit shots, which I haven’t done all season. This is a good time to start making shots and help my teammates out as much as possible." 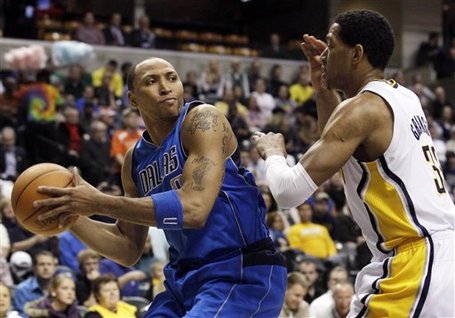 (On the Pacers offensive rebounding at critical times) "We weren’t coming up with loose balls. They were getting every loose ball. Everything was bouncing their way."

(On loose Balls lost) "Long rebounds, it was tough. We weren’t able to come up with the loose balls. They were getting every loose ball and everything was bouncing their way."

(On where the Mavs’ scoring will come from with Dirk Nowitzki and Caron Butler out) "Everybody. We have people who can score on this team. We’ve been very effective this season when everybody is contributing. You can see the balance on this team."

(On San Antonio next) "It is what it is. We know what we’ve got to do and we know what we’re capable of. The last time we played San Antonio at home we were right there until like the last couple of minutes of the game. We know what they’re gonna do, we know how they match up with us, and we’ve just got to go out there and get it done." 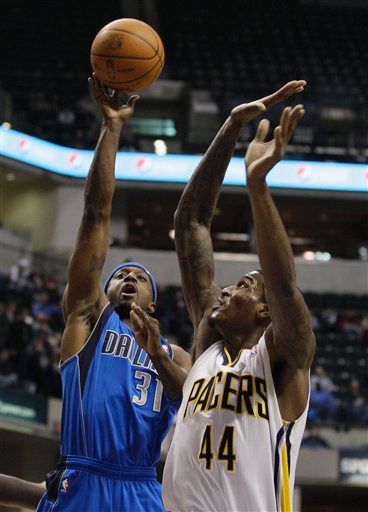 "I will not let anybody miss more shots than me. Promised!

(On the Game, Cpt. Obvious) "They made shots, we didn’t. That’s the ballgame."

(On the Spurs next) "It’s a tough game. It’s gonna be a tough game if Nowitzki goes or if he doesn’t. So, pistols loaded, excuse my language, but I’m cocked and ready to go and play like a Mason." 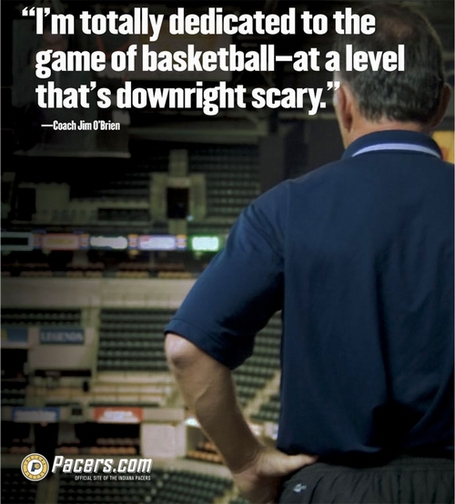 (On winning two straight) "It’s two quality back-to-back wins for our team. I’m proud of the intensity and effort put forth the last two games. Jeff Foster was terrific. The small line-up opens up the court for us and we want to make it as difficult as possible to guard us. "

(On Paul George) "He is shooting with confidence and he’s in and out defensively. But by and large I thought he was very good defensively tonight. He can shoot it. He is going to be a terrific basketball player. I thought we had two very good fourth quarters the last two night, taking good shots, getting stops and being unselfish. I’ve seen good signs in every game in 2011 except in Atlanta." 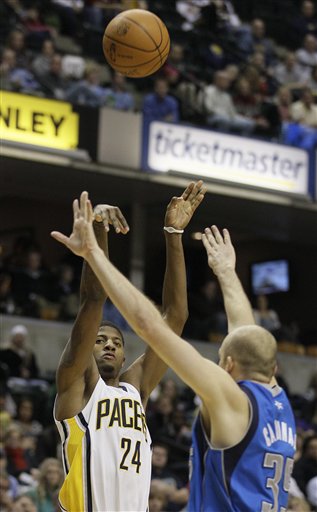 (On his season) "As a rookie I have been able to sit on the bench and to follow the movement of Brandon Rush, Danny Granger and others. I stay after practice to get a little extra work so that when I get in I am able to contribute. I try to improve my game every day in all aspects."

(On Jason Kidd) "We knew he was a great player. We knew he moved well without the ball and it was going to be a tough assignment for us. I feel pretty good as to where I am today." 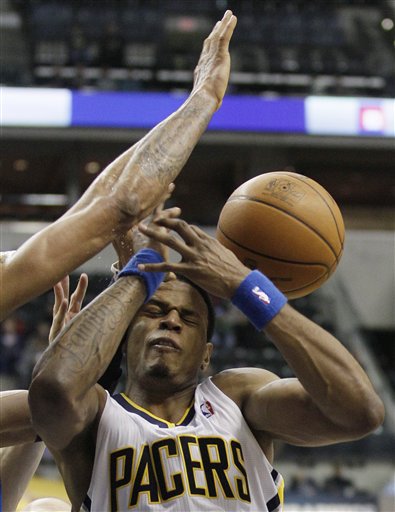 (On the Pacers) "We must keep working and practicing helping each other out and string back to back wins together and move on. We definitely defended well tonight."

(On the offense) "We took what they gave us. They gave enough, thanks Rick! We must move forward with these two wins to play Chicago Friday and hopefully go on the road on a positive note." 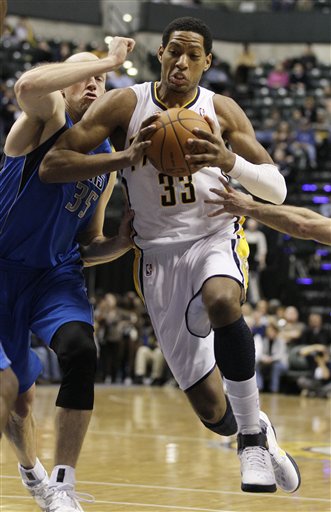 "As you can see, things got ugly in the 2nd half."

(On the game) "We defended well, which resulted in turnovers and some points. We had good movement in the fourth quarter and did not bog down as we have in the past. We were ready, focused and I think ready to get more wins if we play the way we did tonight. Dallas is a good basketball team and they have some good players. At least that's what i've read in the papers."

Hoopdata Boxscore (The Mavs got beat at what they were good the whole season w/ Dirk: the long 2pointer-game. Craaaaaaazaaaayyy)

Chandler bricked two of 9, Haywood one of 2 from the line. Celebration for our third-best Center, Beaches! [nsfw] 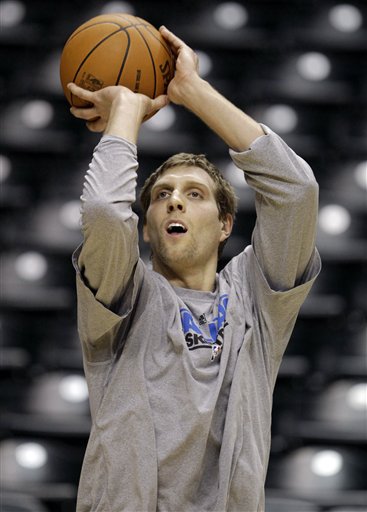 "If you need me as an excuse, take a ticket and wait in line. The Mavs players are still occupying that spot."

Disclaimer: If you couldn't tell by now, all italic sentences are made up thoughts, not actual quotes. Also, this year's dropoff looks a lot like last years....