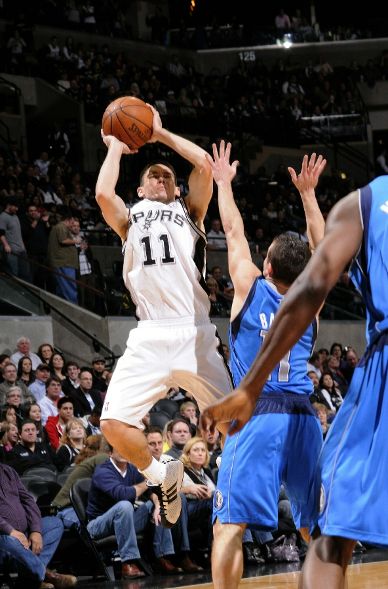 The Mavs (beat/lost to) [the San Antonio Spurs ]¹ tonight (thanks to/despite) Dirk’s awesomeness being limited to the sidelines. The (cloud in the silver lining/major culprit) once more as usual was the lack of support from his team-mates, with the exception of fevering Tyson Chandler/Jason Kidd². Especially useless was Jason Terry /Deshawn Stevenson/Jose Barea/Shawn Marion/Brendan Haywood³ and it is (GUESS WHAT) THEY’RE ALMOST NOT ALL USELESS sans Dirk. 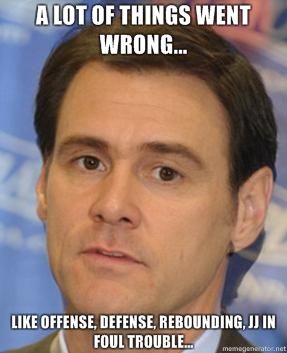 (On the game) "A lot of things went wrong. The first three quarters were very difficult. We’re playing a great team who’s playing extremely well and we just got out-played. There’s not much more to say than that. In the fourth quarter, the guys that were in there, I like how well they played. Dominique Jones has been working really hard and he showed that he has been working hard, so I like what he did in the fourth. But, there’s not a lot of positive stuff to say about the first three quarters of the game. The Spurs were just better."

(On the Spurs’ three-point shooting)  "They hit some shots that were not easy shots. But, they are capable of doing that. That’s just one of the things you’ve got to deal with. I do believe the three-point shots in the first half, as much as the rebounds were a factor, were probably a bigger factor."

(On Dominique Jones) "The one thing I know is he’s ready. He and I and the coaches came at nine in the morning and put in a forty-five minute hard workout before shoot-around. He’s putting the time in, he’s showing improvement, and he gave us some juice in the fourth quarter. He’s going to keep working. He showed that he’s getting better tonight."

(On the team’s energy when Dirk Nowitzki returns) "I’m a big believer in this group. We’re going through a tough stretch right now; we’re taking our hits, and it’s no fun. But, I’m a believer. I like all these guys, I respect them, they did an awful lot of things very well to put themselves in a position where we got off to a very good start. Right now, we’re circling the wagons, and we’ve got to make a stand. It’s pretty much as simple as that." 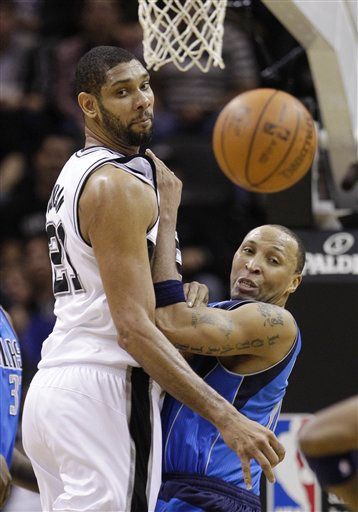 (On Dirk’s eventual return and the speed of getting back to a high level of basketball) "That’s the biggest thing we are missing right now is the little edge we had when things would happen or thing would go wrong. We would find a way with that edge to fight our way over the hump and get through some wins. We’ve lost that right now and we’ve got to find a way to get that back. Who knows? You can say as soon as Dirk comes back that edge might come back as well, but it might not. We’ve still got to weather the storm right now and buckle down and get it done. Tonight they hit some threes and we were trying to run them off the threes. That’s what kept them in the game If you take those threes out of the game I think we win. We got to find a way to keep these guys from hitting these threes on us. That’s what’s killing us."

(On their confidence in getting the job done) "We’re confident we can get it done; we just have to go out there and make it happen and stay consistent with it. We got some great stops when we needed to, but we’re not able to sustain it over a long period of time. That’s the hardest thing. I think we have to keep it positive and keep learning from it. It’s a rough stretch for us right now. Everything is gravy when you’re winning, but it’s that much more frustrating when you’re losing. Everybody is looking at this and that. Everyone has red flags to throw up. It is what it is and we just got to find a way to stick together as a team and pull this out."

(On playing without some of their best weapons) "We’re a couple bullets short of a clip. When you’re a couple short others got to pick up the slack in all areas and not just in one area. That’s the most difficult thing. We got to stop people. We’re able to score. We got plenty of guys on this team that can score. We need to stop some people." 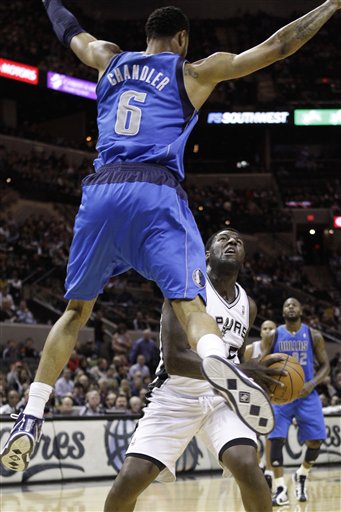 (On playing poorly the first three quarters)  "When you’re out there you try and work on some things. We got to get better. That’s a good team and they had a full lineup. They’ve been consistent all year. That’s something we have to get better at."

(On Dirk’s eventual return) "It’s going to be good to get a healthy team and a full unit out there. It’s tough right now with guys play out of position and guys filling roles they’re not accustomed to. It will be good to get back our team."

(On putting this stretch behind after Dirk returns) "We have things that we need to work on regardless of whether Dirk is out there or not. We got to get better as a team for the long run. Right now as a team we’re doing some things offensively and defensively that are uncharacteristic of us. With him out there he’s going to carry a lot of the load offensively but if we want to be the team that I know we want to be, we have some things that we need to correct."

(On the stress of this losing streak) "The good thing is that we know how good we’re capable of being. We didn’t start this stretch until we lost two of our key players. That’s a tough thing to swallow. I think if you take two star players off of any team they’re going to go through a stretch of what we’re going through. This isn’t anything that anybody else in the league wouldn’t go through. What we need to do is stick together and continue to try and get better."

(On the Grizzlies next) "Tomorrow is a must-win. Plain and simple, however you want to put it. On the road, back-to-back, it’s a must-win for us right now." 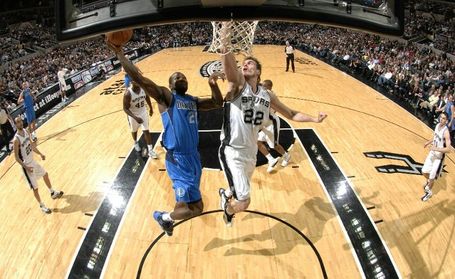 "Who let the Rookies out? That's soo not-Coach-like."

(On careerhigh 13 Points in mostly Garbagetime) "I think I did OK, and I think I can play a lot better. I'm never satisfied with what I do. Just like I said from my D-League experience, every time I get out there I’m just gonna play hard and be aggressive. I’m just trying to get better every time I step on the court." 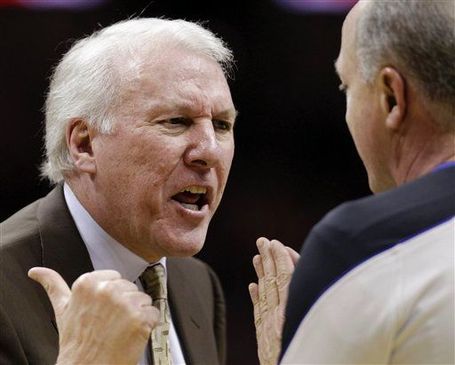 "I can hitchhike whenever and wherever i want, dammit!"

(On Tony Parker’s night) "He came out real focused. He did a really good job of making decisions, for himself or for a teammate. He kept us real aggressive to start the game."

(On Antonio McDyess fall into the stands) "Everybody was probably a little nervous when he went up there, about six or seven rows in. He is not as limber as what he used to be."

(On Antonio McDyess’s performance and minutes)  "That is what he does. It is his job to play smart. He knocks down shots, plays good defense, and rebounds. He is a really solid pro and has been for a long time."

(On Dirk Nowitzki absence and Jason Kidd’s change in performance) "They don’t have all their rubs. They also have Caron Butler who is out and Tyson Chandler was a little under the weather tonight, so as I said we caught a heck of a break. It is our job to take advantage of it and do what we did. I’m glad we did, but we fully realize that was not the Dallas Mavericks. But no, we're not going to refund any tickets. "

(On Matt Bonner absence in the second half) "He has a bruise on the knee. He might be out Sunday also. But don't rejoice too soon, Spurs Fans!" 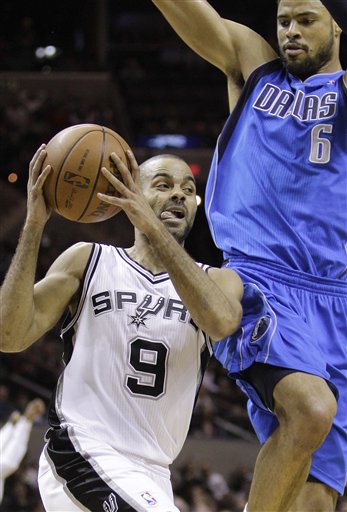 Keeping an Eye on wifey.

(On the start to the game) "Very important. Obviously, they’re playing without Dirk [Nowitzki] and we wanted to make sure we focused and had a good start and played aggressive, so we did."

(On him scoring or assisting on the first eight baskets of the game)  "Just trying to be aggressive in going to the basket and I was successful against them early in the game."

(On building a lead over Dallas) "We got lucky. They didn’t have Dirk and we took advantage of it, but it doesn’t mean anything because they’re not the same team without him. We got lucky in the last two games because he didn’t play."

(On him scoring or assisting on the first eight baskets of the game)  "We talked about it before the game, make sure we have a good start. Make sure we don’t give them any hope and that’s what I did." 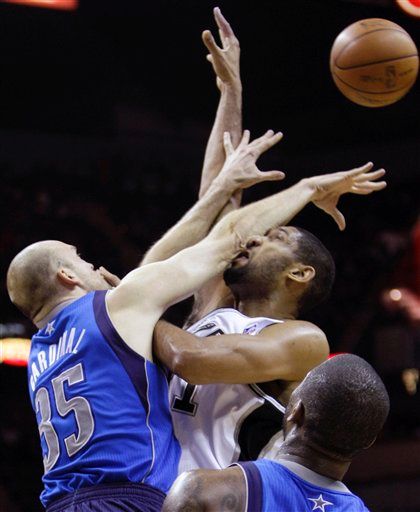 (On if it was important to get out to a good start to the game) "Definitely. We didn’t want to take them lightly. We know they’re dealing with a bunch of injuries and everything else, but we wanted to come out and jump on them early, try to sustain and we did a pretty good job of that."

(On how the Spurs will continue the strong start to the season) "We’re just going to continue to play. It’s great to get out to this start and we wanted to get out to a fast start coming into this year. We want to be able to have home court advantage if at all possible in the playoffs and everything else. We usually start slow, but now we just need to sustain. We’ve been pretty good about staying healthy and I think that’s been a big part of it."

(On if the Spurs want just home court in the playoffs or the top overall seed) "We don’t talk about either one of them right now. That’s in the back of our minds. We want to have that top seed, that home court advantage throughout, all that stuff. Every advantage you can get, you want to take. We’re off to a good start and we’ve got a good lead and we want to sustain it."

Chandler bricked none, Haywood 2 of 4 from the line. Celebration for our third-best Center, Beaches! [nsfw] 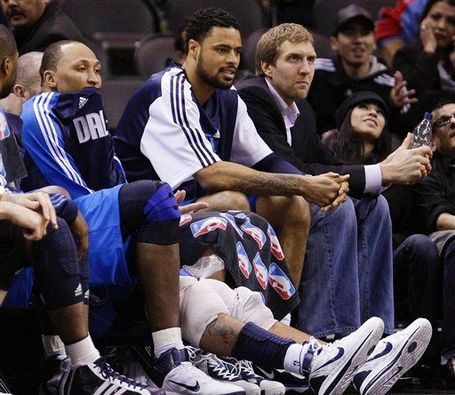 It's all about the legs.

Disclaimer: If you couldn't tell by now, all italic sentences are made up thoughts, not actual quotes. Also, take your medicine.