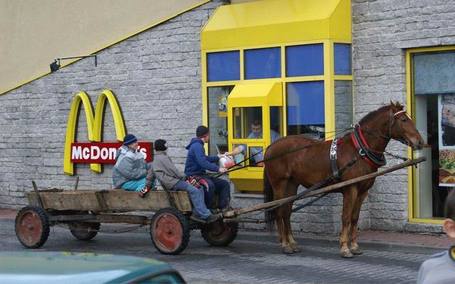 An Expressionistic View of the Dallas Mavericks Defense, ca 2011.

On a second thought, of the Offense, too.

The Mavs (beat/lost to) [the Detroit Pistons ]¹ tonight (thanks to/despite) Dirk’s limping awesomeness. The (cloud in the silver lining/major culprit) once more as usual was the lack of support from his team-mates, with the exception of fevering Tyson Chandler/Jason Kidd². Especially useless was Jason Terry /Deshawn Stevenson/Jose Barea/Shawn Marion/Brendan Haywood³ and it is (GUESS WHAT) THEY’RE ALMOST NOT ALL USELESS!

² Only one of them, mind you. Chandler was sick at the hotel again and still the best help Dirk had all game. Think about that for a minute.

³ Two at the minimum, up to all five of them. And we're being generous not to include all scrubs. 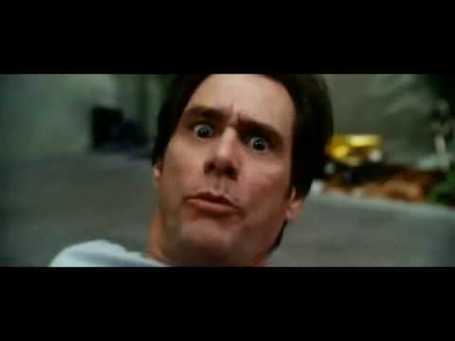 (On the game) "Unfortunately we caved. Our competitive level has got to come up, it’s as simple as that. What happen in the second half is not acceptable."

(On Missing Tyson Chandlers interior defense) "You can’t worry about guys that aren’t here. Everybody else has to pick those guys up. We all own it. Myself, on down to the other coaches, to every player. This is not what we’re about and we got to remedy it quickly."

(On the Losing streak) "In these situations you never get out of it just because it’s time to get out of it. You must fight out of it and we got to fight harder. That’s the really the beginning and end of it. Really we didn’t have enough fight to get us over the hump or even near the hump and that’s disappointing." 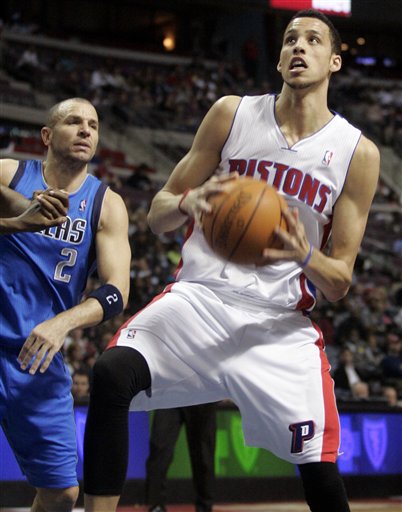 (On the losing streak) "We’re taking small steps in the wrong direction. Its not anything new as far as being in this league, you’re going to play through your highs and lows and try to minimize the lows. For us right now we have enough talent we just can’t get enough stops when we need to or make a shot. This is the time for us to get closer together and look at what we can do to individually just to help us out. Team defense has been our blueprint when we were winning and now that we’re not winning our defense has dropped off. In short, when we win, we win close; when we lose, we lose big."

(On the Loss) "This game is about effort and we’re not giving the effort. There are guys that can come and give that effort so I think everybody has to do a little bit more effort-wise and the big thing is never to get frustrated because then you start doing things out of the ordinary. We just have to stay the course. Speaking about course, is there a golf course nearby?"

(On losing, and no, there is no pattern in these questions, thanks for asking) "Any time you lose its frustrating. When you’re losing more than two games in a row, we’re on a skid right here. We got to put a stop to it. On the other hand, we can just wait till the Trade deadline like last year. Or the year before. Yep, that's probably what we're gonna do."

'Alone in the Dark' Dirk Nowitzki 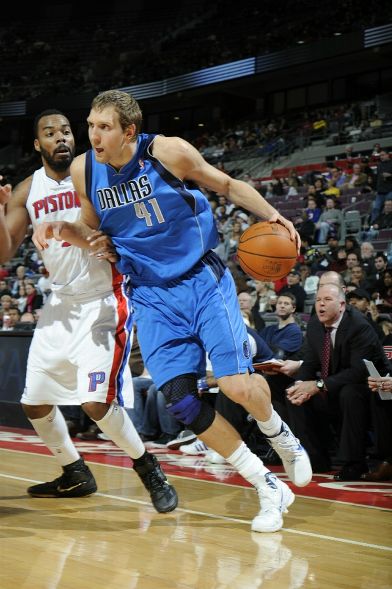 (On the streak) "A six-game losing streak is always ugly, I don’t care who you are. It’s not fun to go through. And it’s funny how things can turn around in this league. Winning and losing is a fine line. Earlier in the season it seemed like whatever building we walked into we were gonna win. And now it seems like we can’t find a way to win."

(On the Loss) "We just looked a little flat and uninspired."

(On Defense) "If you are on a losing streak, you’ve got to create your own breaks. You’ve got to jump through three people to get a rebound. You just can’t walk in here and then let them shoot 60 percent. There’s no way you can win that way. We won by defense earlier in the season Our defense has gone haywire, and I don’t know what happened."

(On the week) "It’s just not pretty right now, but we’ve got to find a way to win. The good thing is we’re going home, and hopefully our crowd can get us fired up for a big game against the Lakers This week is tough coming up, especially with a late game on Wednesday and then flying up to Chicago, which gives us a nice back-to-back. But it is what it is. Everybody has those kinds of games. In this league nobody feels sorry for you, and you’ve got to create your own momentum, your own luck."

(So what to do?) "The good thing is on a losing streak everybody has got to look in the mirror at themselves first. 'Am I bringing it all? Am I giving it everything I have for the franchise and for the fans?’ Hopefully, everybody has to sit on this one and come out strong again on Wednesday." 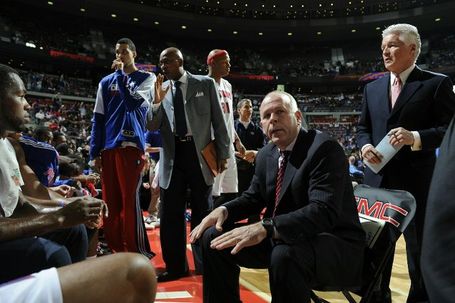 "Ok guys, let me tell you a secret. Their guards can't stay in front of a snail. Just drive right by them and we got this"

(On the game) "Not to jinx us but we did a great job in that third quarter. I was very impressed with how we came out and defended and offensively shared the ball. We were attacking getting post ups, guys finding the right man open and even that second group came in a did a great job of distributing the basketball."

(On three game win streak) "We talked to the team going into the Philadelphia game. ‘We got a five game stretch, lets take advantage of this.’ We were four and one during that stretch and loss to Memphis, but every game I thought we competed and that’s the most important thing right now is getting guys to play at a high level. We’re getting ready to go out on the road and play teams that are playing well but we got to make sure we have the same type of focus, intensity that we had these last three games. These were important wins for us."

(On the lineup) "Right now I like what I’m seeing out there. I’m very comfortable with the way this group is playing and the guys off the bench are doing a great job."

(On third quarter adjustment) "Sometimes you can talk too much. You’re playing 82 games. We go in there, we tell them what we see on the tape that we watch. We have a highlight tape and a lot of the time we show the players and what we’ve done is adjust it in regard to saying hey listen this is what we see and this is what we want, lets make this adjustment. We understand that the first five minutes we have to play physical basketball and our guys did that tonight."

(On Richard Hamilton playing in the future lineup) "We’re searching for something that could make us head in the right direction and we’ve made a lot of adjustments throughout the year. Right now with this group we feel comfortable right now and so we want to ride it as long as we can. Players are in and players are out, it’s happen throughout the season and because you’re in the position that we’re in right now we got to make adjustments." 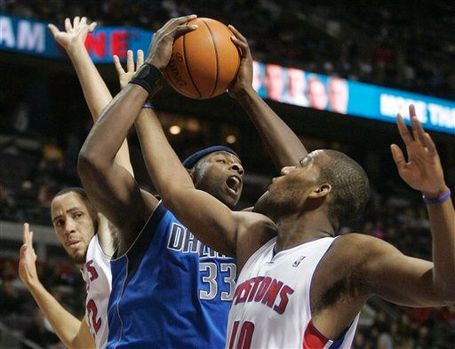 "C'mon, gimme that ball. You would miss anyway."

(The keys to the last three-game win streak) "The first half is mental. Everybody's been keying in on defense, as far as helping each other, one-on-one defense and executing. Everybody has been on the same page." 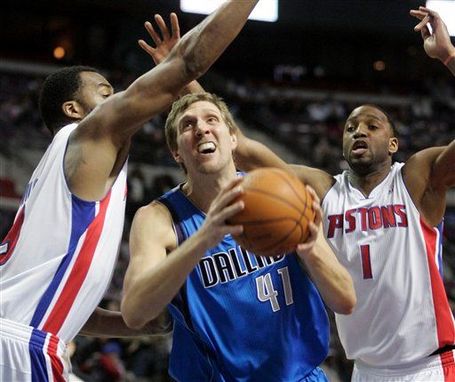 "Don't leave me here, Dirk! Remember the time we combined for 101 Points?"

(On rotation) "I think this is an emotional game. Guys have to know their roles coming into the games and I think that is set, that foundation has finally been set. Guys know their roles, when the starting group doesn't, guys coming off the bench and things are just clicking. That's something we've been searching for for quite some time and I think we finally found it."

(On front court) "Guys have been doing well. Rebounding, Greg Monroe has been playing with a lot of intensity, rebounding, and scoring the ball. Chris Wilcox and Greg Monroe really compliment each other well. I think if we keep getting those guys to play that way and we get the production we've been getting out of our bench, we'll be fine."

(On blueprint of team) "When you play at home, it seems like everybody feels a lot more comfortable playing at home. That's why the contributions we get from the guys, guys coming off the bench and it's just spread around. I think it's up too when we're on the road, it's my job and other guys to really take that leadership and come out and get that energy."

'The other' Greg Monroe + Fellas

Haywood got the start, and promptly bricked 4 of 6 from the line. Celebration for our third-best Center, Beaches! [nsfw] Furthermore, NO Bench Player (plus Marion and Kidd) EVEN attempted a FT. Go Mabs.

After allowing MEM 44 (to 24 of their own) last Game, DAL gave up 50 Points in the Paint while scoring 26. You can't even make this stuff up. 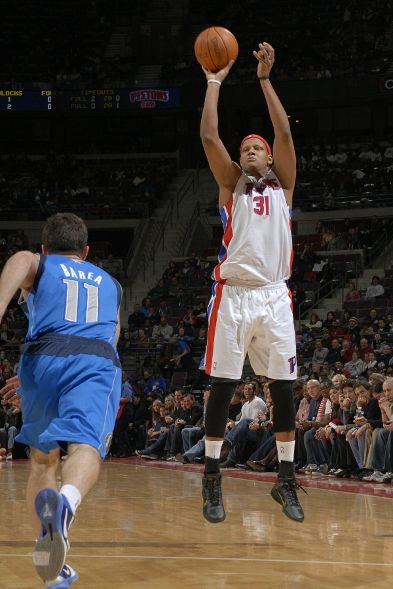 Rotation can be a limitation.

Disclaimer: If you couldn't tell by now, all italic sentences are made up thoughts, not actual quotes. Also, after the Memphis Game, Dirk said 'it can't get any lower'. Unfortunately, his teammates heard that and felt challenged.