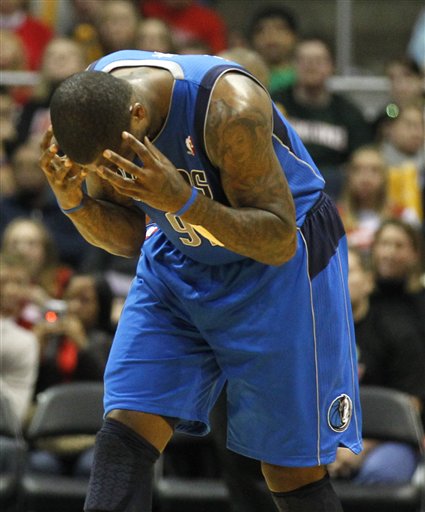 The Mavs (beat/lost to) [the Milwaukee Bucks]¹ tonight (thanks to/despite) Dirk’s awesomeness at the sidelines. The (cloud in the silver lining/major culprit) once more was the lack of support from his team-mates, with the exception of Tyson Chandler/Jason Kidd². Especially useless was Jason Terry/Caron Butler/J.J. Barea/Shawn Marion/Brendan Haywood³ and it is (GUESS WHAT) THEY’RE ALMOST NOT ALL USELESS.

³ Two at the minimum, up to all five of them. For the second consecutive game, Terry scored half as many points as he took shots. Consistency FTW! 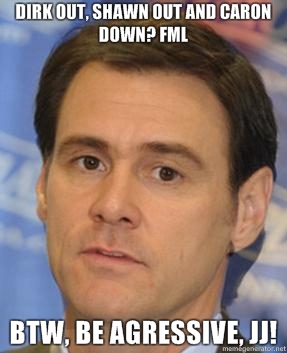 (On the Loss) "It’s tough right now. But that’s how it is in this league, and we’ve got to keep going. And we’ve got some other guys that are certainly capable, and they’ve got to step up and play well for us."

(On Butler walking off the court) "I tell you what, with the potential seriousness of the injury, the guy got up and walked off the court. And that’s one of the most impressive things I’ve ever seen in basketball in 35 years of this."

(On Butler's injury) "He’s a man’s man. And we all have an awful lot of respect for him, and we’re gonna hope and pray that it’s something he can come back from sooner than later. We’re afraid that it’s potentially serious, but we won’t know anything for sure until Dr. Souryal looks at him, we get an MRI and whatever diagnostic test we need to get. We’ll find out tomorrow probably where things are at." 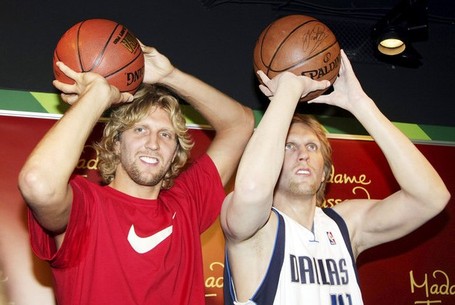 "Maybe we could use my wax figure to space the floor a little, huh?"

(On Butler's Injury) "To watch a teammate go down on the floor and pound the floor like he was, it's just terrible. We're all just pulling for him now."

(On himself) "I'm doing better. Hopefully, it'll be sometime next week. We'll have to wait and see." 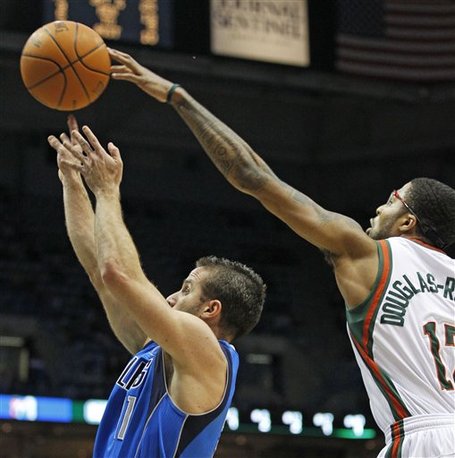 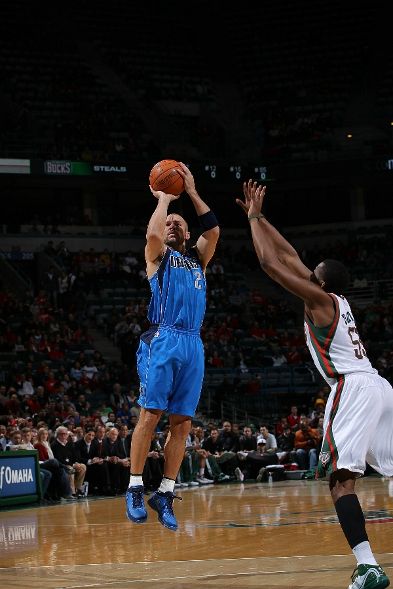 Your leading rebounder, Lads and Ladies.

(On the game) "We’ve been hit with the injury bug a little bit, but we feel we’ve got enough guys to win ballgames. And we were in a great position here in the fourth quarter to get a win on the road. We just came up short."

(On losing 3 straight) "We’ve got to stop the bleeding, so we’re very fortunate to be able to have another game tomorrow night. But it’s not going to be easy. Cleveland has some talented guys that play hard and can put some points on the board. So, the guys that are in uniform are gonna have to stick together and find a way to get the win." 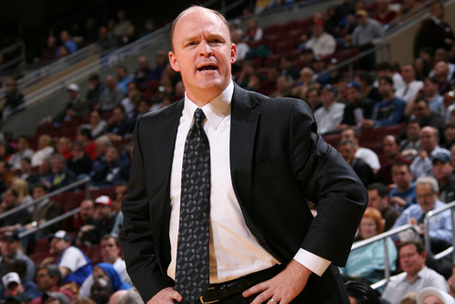 (On keys to the win) "We got off to a pretty good start, playing well until about the four-minute mark going into halftime. They came back and gained a little momentum, went back and forth. It was another game when we had to make plays to keep them at bay, and we were able to make them at both ends. Their 3-point shooting and [Jose] Barea kept them tight in the first half. We were able to at least get out and contest a few more in the second half, and get them off the line a little bit better."

(On Earl Boykins’ performance) "He was very good again, obviously. He came in, made shots. You know, Earl’s one of the guys we have who can get it into the paint and somehow get it over people and still finish. Those are big plays. You don’t get in the paint very often against good clubs; when you get in there you have to score, and Earl’s been good at that."

(On Dallas’ zone defense getting exposed) "They were in zone about 50 percent of the possessions tonight so they were in it quite a bit. We were up and down against it, but when we needed to make a shot, John [Salmons] made a couple big shots, Ersan [Ilyasova] was good again. At least when we needed a play we were able to make it." 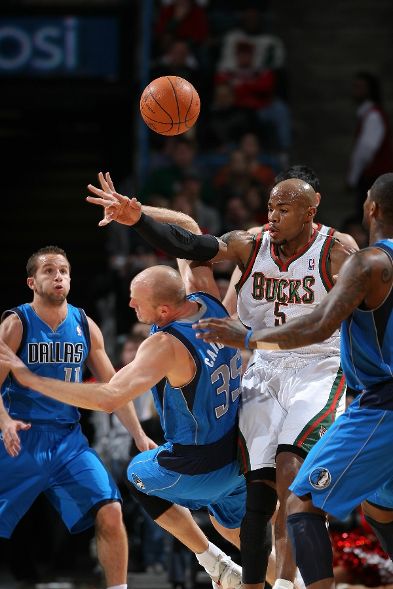 "Once more into the breach, my Cardinal.."

(On keys to regaining lead and closing out the game) "Earl Boykins. Earl’s been coming in and putting up tremendous numbers for this team and really holding the fort down, because our star point guard is out. Earl is doing a terrific job, just coming in and holding us afloat. When he comes in, he comes in with a lot of energy and gets the tempo going. It’s a faster tempo, he’s a fast-break type of player, so he gets opportunities, starts it rolling and hits big shots and the team capitalized from there."

(On looking ahead) "As a unit you have to stay positive through all the turmoil, but that was in 2010, so in 2011 we’re doing alright right now. Hopefully we can keep going, we have a few tough games ahead of us with Miami, Orlando and back with Miami. Hopefully we play hard and shoot the ball well. Tonight we had a great shooting night, thanks to Earl and some other guys and John [Salmons]. If we can kind of pick it up and improve our shooting during the next 15-20 games, it would give us a better opportunity." 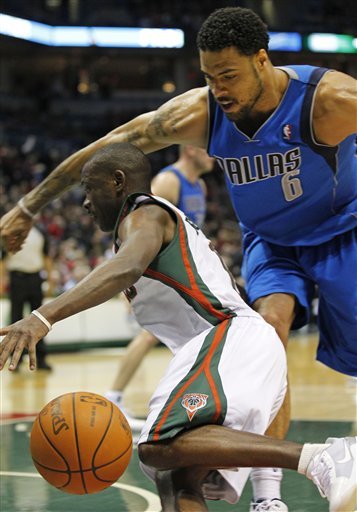 "You have no chance. I can dribble through your legs, man!"

(On tonight’s game) "It was big; tonight showed what we’re capable of doing when we play with energy. Tonight we had the same type of energy we had against the Lakers, and that’s what we need every night. If we play with that type of energy, we’re a very good basketball team."

(On the zone) "There's not too many teams in this league that can play a very good zone. A lot of teams play the zone, but you know sometime they get overextended just because guys aren't used to playing the zone. Their guards were a little too wide. Once we were able to get their guys wide we passed to the middle and that was huge."

(On his three-point shot out of the time out late in the game) "I was actually supposed to pass the ball (laughs). I was looking for the three. I could see they were starting to cheat toward the passing lane and knew that was going to be there.

Haywood 1 of 4 from the line. Wood-choppin' everybody! Celebration for our third-best Center, Beaches! [nsfw]

JJ with 10 Points and 6 FTs. Dallas 24, Milwaukee 50 Points in the Paint. You never played fallout, did you? 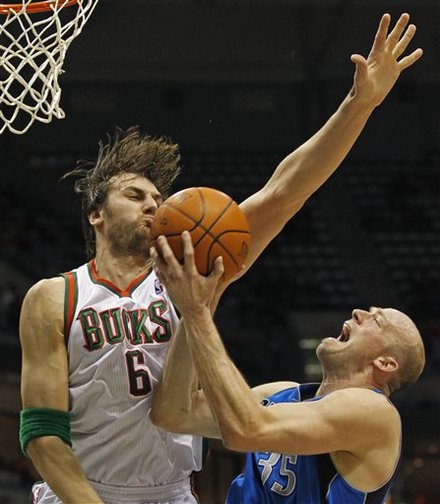 Fear.the.Deer [in an empty Arena]

Disclaimer: If you couldn't tell by now, all italic sentences are made up thoughts, not actual quotes. Also, the Mavs are currently playing like i feel.