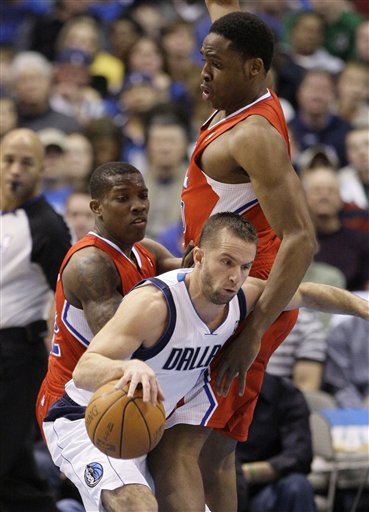 So Chandler has 21 Points without missing a single shot and Haywood has 0 Points, missing his only shot. The Mavs get outscored by 10 with Chandler and pound the Clippers by 22 with Haywood. Obviously. 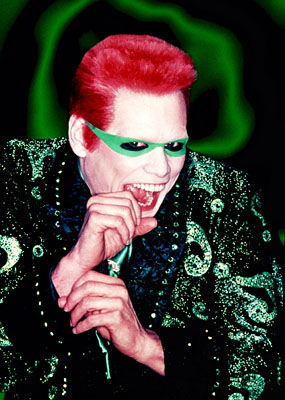 (On the Game) "I’m happy for the win. The second half was way better and we did a lot of things very well. In the second half, a lot more things went our way because we became a lot more aggressive and we attacked at both ends."

(On Griffin) "In terms of a guy that’s making major strides all the time, I mean he’s just one of those unique guys because of his ability level and also because of his love and commitment for the game, which I see from afar and you hear about. He just gets better and better. He takes quantum leaps by the week."

(On the Subs) "They gave us a big lift off the bench, as did Marion, as did Haywood and I thought Mahinmi played well."

(On the Clips shootin 68% at half) "That is an unacceptable number for a team that has high aspirations. So, yeah, we can live with that."

(On Baron Davis words of advice) "I’m not going to talk about that. It was ... whatever."

(On giving up 62 at the half) "We didn’t get off to a good start, obviously, and we’re gonna have to do better there. We weren’t ready to play at the beginning and it was clear."

(On keeping perspective) "We got out of here alive, but it certainly was not an easy game and we don’t expect any of these games to be easy." 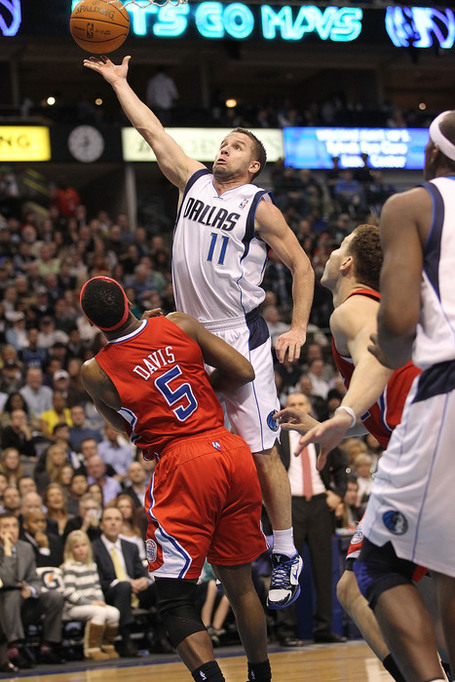 Barea:"Mr. Davis, you're too kind to facilitate my career night. Thanks a lot!"

(On scoring 25 Pts on 12 Shots) "I got in rhythm early and it felt good. We needed some energy, so I just put it in my mind that I had to be aggressive and bring energy. I just went out there, coach put me in a little bit earlier and I just played with energy and things were opening up for me. My big guys were setting great screens all night."

(On the Baron Davis altercation) "Well, he was posting me up, so that was making me mad every time. So, I was just trying to do my best and he got a little frustrated. On the next play, I got closer because I knew he was going to hit me again."

(On the subsequent Flop) "I didn’t have to go down, but when you get hit like that, you go down. (grinning) It’s basketball."

(On Carlisle yelling at Baron) "Awesome." 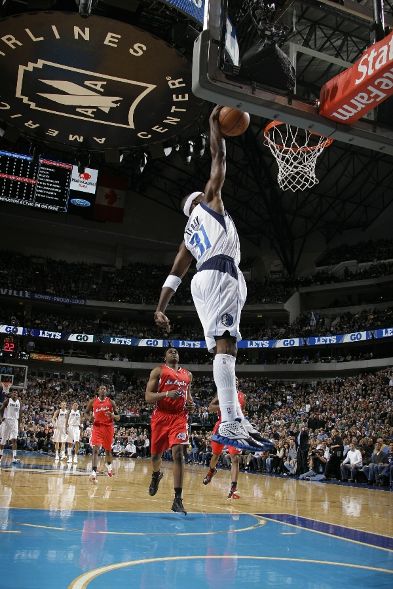 That one probably needed the afterburner.

(On Barea) "J.J. got it going. He kept us in it. It easily could have been a blowout loss for us, but he kept us in it. We could be in here sad, but for him to come out and do what he did offensively and defensively against Baron Davis was tremendous. You look at him, and I’ve got guys challenging J.J. from family friends to guys at the YMCA at the rec. They want to take his spot. But ain’t nobody taking his spot. He’s one of the toughest players on the team."

(What was the deciding moment?) "The play of the game, you hate to say it, but it was ‘Wood throwing down Blake Griffin and really making a statement. He missed one of those free throws and then we got a stop on the next possession."

(On the Homestand) "It’s very important. This was a good start to a homestand. Obviously, we have ground to make up from what we lost when we had our key guys injured. And I think tonight was a good start. Houston, they always play us tough. A tough team, and I know they’re gonna be another tough challenge."

(On Carlisle cussing) "Man, that’s it. Guys see it and we get fired up from it. This team has been looking for some personality. When it comes from your head coach, that’s big. You know he has your back, but that’s just another example of it. Everybody thinks Rick is this calm-demeanor guy, no emotion. He shows tons of emotion and tonight was an example of that." 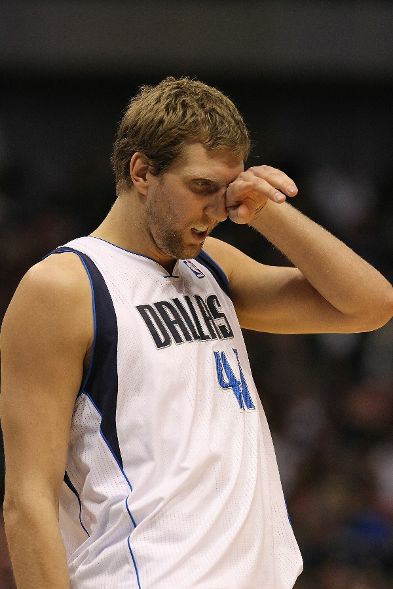 (68 Percent at half?) "I think we were a step slow to everything in the first half. We let them shoot close to 70 percent, and that’s obviously not what we want."

(On the Clips) "They were all over us and got into us in the first half, pushed us around a little bit. In the second half, we were the more aggressive team. That's how it is in this league, usually. The team that's more aggressive gets more calls, gets the benefit of the doubt. They were the team that got the benefit of the doubt in the first half, then we turned it around in the second." 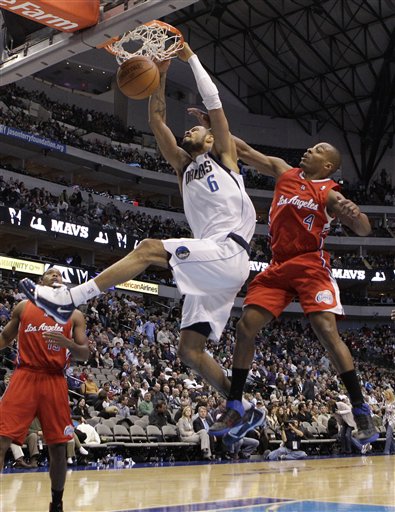 "Too late Randy, too late!"

(On Carlisle ready to brawl Davis) "I’ve got his back. He’s all right"

(On him being perfect from the field and stripe but in foultrouble) "It’s definitely frustrating because you want to be on the floor when you’re rolling like that. I thought I picked up some ticky-tack fouls, but sometimes it goes that way."

(On Haywood) "You know what, I was excited. I think this was one of his best games so far this year," Chandler said. "Sometimes the stat sheet doesn’t show everything that a guy is out there doing. The defense that he played against Blake, his weakside defense, his rebounding, keeping balls alive, giving us extra shots, his physical presence, it was a huge game for him tonight." 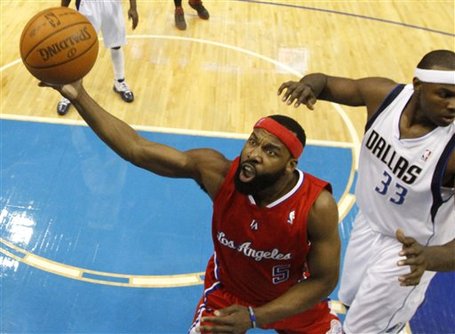 (On hacking Griffin) "No, that’s not a flagrant foul. I feel the NBA should give my money back for that one. It was one of those plays - I just grabbed his arm. He’s just so athletic and strong that he was still trying to finish the play and he ends up basically not protecting himself."

(On highlight And1s) "On those type of plays he has to realize, 'All right, I got fouled, just throw it at the rim and come down. Protect yourself for the next play. Every play can't be a dunk-contest dunk."

(On Blake Griffin's Game) "He still ended with 22 and 11, so it’s not like he had a bad night. I felt like I blocked a shot or two of his and contested some more. I felt I did a decent job on him. But hey, i just work here anyway." 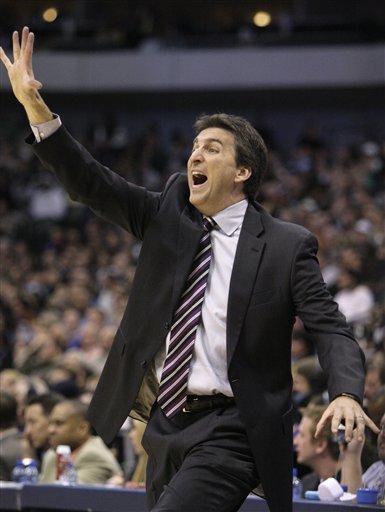 "Don't run away, my Moneyball! I'll see you in the court after i'm fired!"

(On Haywood's flagrant) "Those things are going to happen. Blake's around the basket and he's always going to attack all the time and guys don't want him to finish. We should take a book out of that, too. When guys are around our basket, we need to do the same thing.

(On the Mavs) "They've got a bunch of length up there. They're a veteran team and protecting the rim is what you're supposed to do."

(On the Mavs injuries) "You're going to have injuries, things you can't control. The Mavs have always had pretty deep teams for other guys to step up and play well. They've been able to handle injuries this year." 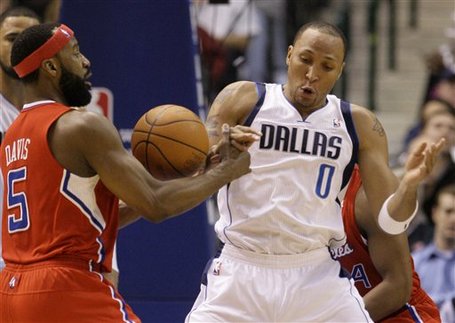 (On Carlisle after BD complained about JJ's flop) "He basically thought I took a cheap shot on Barea. Barea was flopping the whole night and he flopped on that play. So when Carlisle looked at me, 'That was a dirty play.' I was like, 'No it wasn't. This dude is flopping.' I guess he felt like he was protecting his player. He started cussing me out. I told him, ‘Go have some lunch." 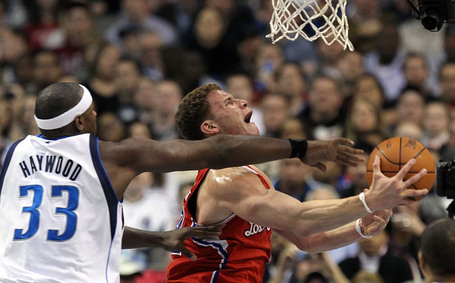 Running through the Woodshed hurts.

(On his game) "Obviously I could have done better. I'll watch the film and get better from it."

(On his elbow) "It's not too bad. After that flagrant foul it started hurting. We'll see how it is tomorrow."

Dunk of the Night

Flagrant Foul of the Night

Flop Elbow of the Night

NBAPlaybook Dagger Three and Highlight Preventer (no, not Haywood)

Haywood bricked Griffin to the floor NONE of NIL from the line. Celebration for our third-best Center, Beaches! And thanks, Dirk, for ruining a perfect FT Night for the team with two bricks. 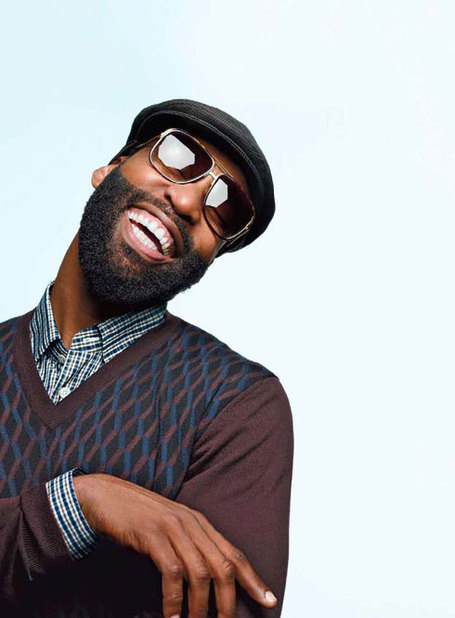 Born 30 years too late for lunch.

Disclaimer: If you couldn't tell by now, all italic sentences are made up thoughts, not actual quotes. Also, breaking news, the Mavs tied their shoelaces backwards and are subsequently on a Winning streak.

The Mavs (beat/lost to) [the Los Angeles Clippers ]¹ tonight (thanks to/despite) Dirk’s Awesomeness. The (cloud in the silver lining/major culprit) once more as usual was the lack of support from his team-mates, with the exception of Tyson Chandler/Jason Kidd². Especially useless in the first half was Jason Terry /Deshawn Stevenson/Jose Barea/Shawn Marion/Brendan Haywood³ and it is (GUESS WHAT) THEY’RE ALMOST NOT ALL USELESS!