Rockets @ Mavs Post Game 45 Quotes "Be there for Superman"

"Superman needs somebody to take his clothes."
Somebody made a gif of this, too.

I would also like to congratulate 55% of the voters. You were right. All because of JJ. 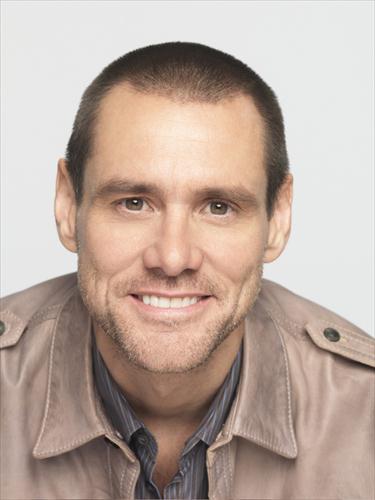 "I'm not afraid to give JJ the ballz"

(On the Game) "I thought that we played three good quarters of basketball and one quarter of subpar basketball. So, I’m glad that we won. I think that the other quarter from tonight is upside and we have to get over it. I don’t have any excuses for it. They are a hard-charging team that keeps coming at you and we have to do a better job when they do."

(On the Points from Chandler & Barea) "Barea has been a difference-maker for us and Tyson's getting more involved offensively, which is good."

(On Barea) "Tonight it was pretty clear that he was the guy that had the most going out there. When it came down to it, the right thing was to put the ball in his hands and make plays. The only decision was who to set the screen. And he made some difficult shots. I don't want us to be in a position to ask him to do this every night. That's really difficult. But right now we've got to have 10, 11, 12 guys out there ready to do what they do well to help our collective cause. Barea's a fighter. He's a guy that if you follow his career at all, he's been a guy that's got a lot of guts and a lot heart.  He ain't afraid. And I ain't afraid to give him the ball."

(On the high total of points scored) "When you play Houston the games tend to be high scoring. Our balance was good offensively. It’s just that there are 15-20 possessions where we need to be better. It’s a fact, it’s reality and we’re going to keep working towards being better."

(On the offensive contributions outside of the normal players) "It’s not going to be Dirk Nowitzki and Jason Terry every night. And it’s not going to be Dirk or Jason Kidd every night. We have strong belief in the other guys. Tyson Chandler is getting more accustomed to what we are doing offensively, which is good. Another guy, Pavlovic, was real good for us tonight. I thought defensively he was real solid and he hit some shots."

(On Dirk continuing to struggle) "Dirk was Superman for the first third of the season. Right now, we're going to have to be there for him."

(On letting big leads slip) "Look, we've got a really good team here. We've just to work at continuing to get better. In those situations where we can build big leads, we're going to try to add to them. We didn't get that done tonight." 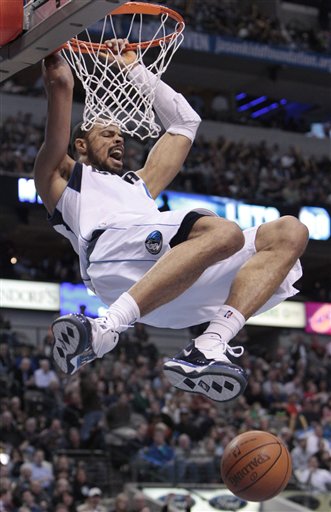 (On the Mavs start) "I thought we played great, defensively and offensively. To have a game like this and to get off to a great start, I’m just glad to see us get out and play the type of basketball that we played."

(On what happened in the 2nd half?) "I think them going to the free throw line and fouls called slowed the pace for us."

(On finding the offensive groove without Caron being in the lineup) "It’s tough when you take a guy like Caron out of the lineup, a guy who’s putting up 20 to 25 points a game. You have to make adjustments, and we’re trying to do that."

(On whether he sees himself getting more opportunities) "Yeah, definitely so. Throughout the year, you’ve seen more confidence from me. Now with guys gone on the offense, I find myself getting a little more aggressive."

(On how important it is to continue playing well) "It’s important. In the West, the way the standings are, with one loss, you can fall down to 5th or 6th. With a couple wins, you can probably climb your way up to 3rd or even 2nd place." 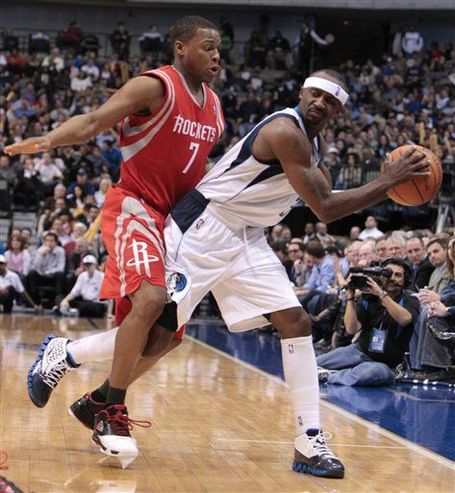 (On JJ Barea) "He’s done a great job of coming out and executing what Coach wants him to do as far as running the team offensively. He’s being aggressive, he’s looking for his offense, and tonight it paid big dividends."

(On the offense) "We’re spreading the wealth, everybody’s getting involved and when we score over 100, you can check the record."

(Do you even want to blow anybody out?) "Yeah, you want to blow teams out. But that's not going to happen nine times out of 10 in this league. Teams are going to continue to fight. They've got pride. We wanted to bury 'em. But we put them on the free-throw line there in the first half so we couldn't get away from them because they were marching to the line. But for the most part, great effort." 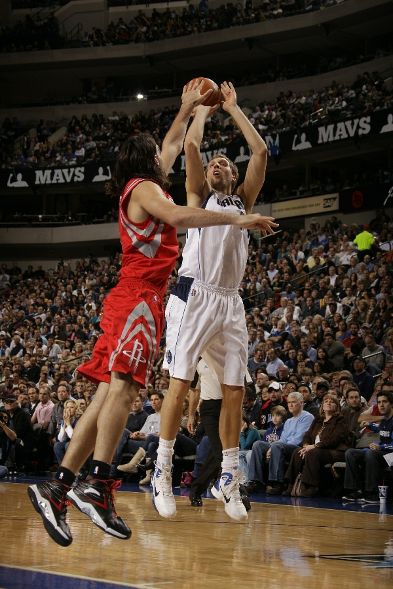 (On his leg's conditioning) "Not very well, but it's getting better. Moving better again, especially in the first half, but in the second half I got a little fatigued. But I've got to keep on fighting, and eventually I'll get there."

(On his rebounding) "There was one ball right around me and I couldn’t even make one step to get it. That was a brutal play right there. I’ve just got to keep on working. There’s nothing really else to say."

(On Barea's perfomance) "Every shot he’s taken lately looks good, his floater, his pull-up. And if a guy is playing like that a couple of games straight, you’ve got to give him the ball." 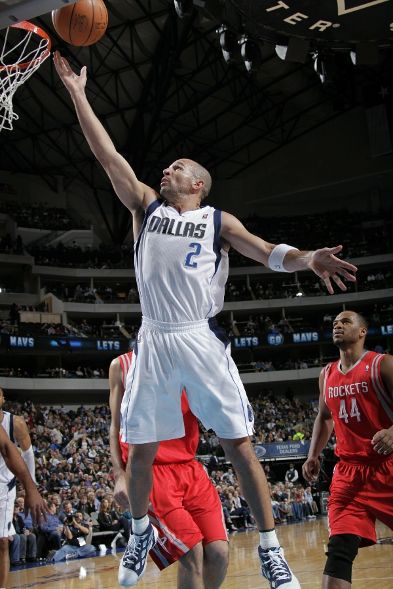 (On the third Quarter) "We missed a couple of shots that we would normally have made. And with a couple of turnovers sprinkled in there, they were able to cut the lead."

(On JJ) "Barea puts a lot of pressure on the opponent. He’s a guy that can get to the basket, and we need him to do that on a consistent basis, beacuase Terry can't, Marion can't, Dirk can't right now, Chandler and Haywood can't cause Coach won't allow it, Pavlovic can't because of his nose, Cardinal can't due to his sins, Mahinmi can't for fouls and i'm just too old for this shiat . And you can see his confidence growing these last couple of games." 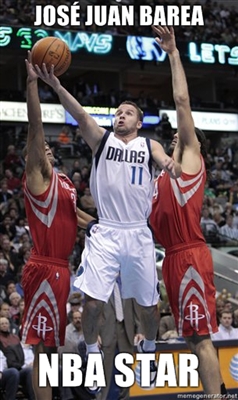 (On his game) "Coach kept calling pick-and-roll for me, J-Kidd gave me the ball and the big guys did a great job of setting screens."

(On Dirk) "Everybody has to step up. There's no question he's not even close to being Dirk Nowitzki. We've got to keep getting wins and giving him some time."

(On the fourth quarter struggles of Dirk and Jet) "They struggled a little bit in that fourth, and that normally doesn’t happen. And Houston don’t really have shot-blockers, so I was just trying to get in there and get it up." 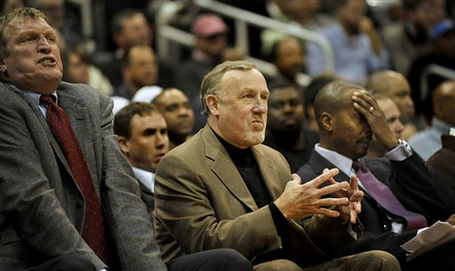 (On the poor start) "I was disappointed in the way we started the game. Got our ourselves in a hole and it was tough to climb out of it. It was offensively that was our problem. We turned it over and they just got layup after layup in the open court. We were a step behind in everything we did and we did nothing on offense to make them slow down. In the second half we just started executing things better and we had a chance to get back and get set. When a team gets layup after layup, all the shots look easy. We played hard and did a lot of good things in the second half, but it’s just too hard to come back against a good team."

(On Barea’s shot at the end) "They were setting a lot of picks for him and they left shooters with Chandler out there on the boards and we didn’t do a good enough job of getting through the pick and getting in front of him. That is all I can say now until I look at it. But, he was getting like two or three picks at a time and you try to stay home on Nowitzki and you try to help on Terry and Kidd and he made us pay." 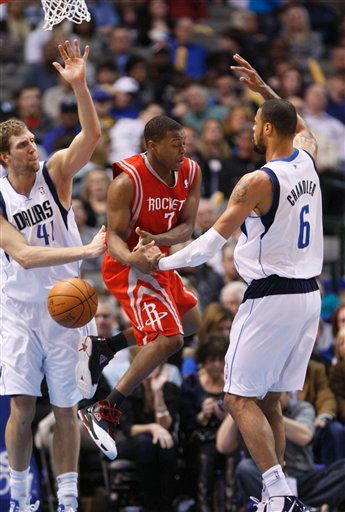 (On the start of the Game) "You can’t get down 25 points to start the game. We turned it around by playing defense, and getting out and running."

(On Defense leading to Offense) "They play that sort of game, too. We get out there and we run and we shoot, make plays and pass to each other, we’re a tough team to guard."

(On getting down 25) "We missed some shots and guys got down on themselves, upset that we missed some shots that we usually make. Just tough coming in here playing against a team that plays the way they play, how fast and how hard they played from the jump. They were well rested and we need to come with a better mentality and better approach."

(On the near-comeback) "It could be a positive but at the same time we want the ‘W.’ We wish we’d have won the game and wished we would have come out more aggressive but we can take good things from it and can take bad things from it." 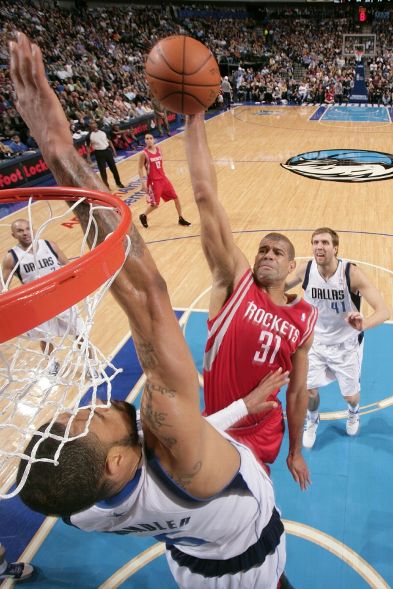 (On the first half) "We got a little impatient in the first half. We weren’t making a whole lot of shots, we started to do a lot individually, force passes, and they’re too long to do that. We dug ourselves in a huge hole. That was one of our worst halves in a long time."

(On coming within one) "I’m proud of the way we fought in the second half, but then again we couldn’t have played any worse. The only place to go was up at that point. Didn’t make enough plays down the stretch but we never gave up." 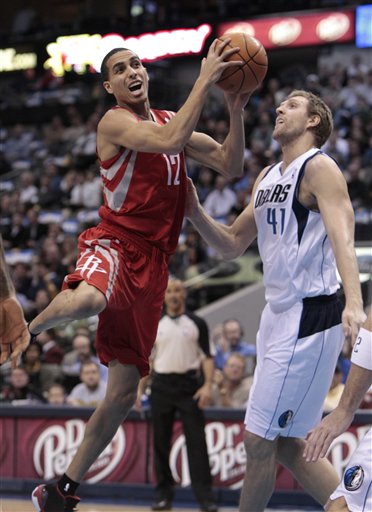 (On the game) "You cannot dig yourselves into a 25-point hole before you come to play. I don’t know what inspired us, when coach yelled at us or the embarrassment of being down 25, but you can’t, especially on the road to a team of Dallas’ caliber, get down 25 and expect to win." 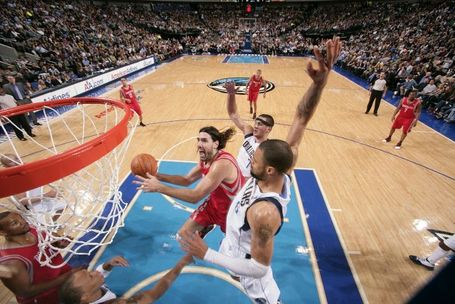 (How does it feel to be Charles Barkley's Grandmother?) "You feel bad because you start bad - you’re never supposed to be 25 down in the NBA. We came back and it was a good thing but at the end of the day we lost and that’s what counts. But, yeah i like Chuck. "

Dreamshake (is not really into recap or such things)

Haywood bricked NONE of NIL from the line. Celebration for our third-best Center, Beaches! On the other Hand, Dirk and Chandler ruined a perfect FT Night for the team with two combined bricks. Again.

Dirk's Interview on the UnTicket

Disclaimer: If you couldn't tell by now, all italic sentences are made up thoughts, not actual quotes. Also, breaking news, the Mavs tied their shoelaces backwards and are subsequently on a 3 Game Winning streak.

The Mavs (beat/lost to) [the Houston Rockets ]¹ tonight (thanks to/despite) Dirk’s Blocking Awesomeness. The (cloud in the silver lining/major culprit) once more as usual was the lack of support from his team-mates, with the exception of Tyson Chandler/Jason Kidd². Especially useless  was Jason Terry/Deshawn Stevenson/Jose Barea/Shawn Marion/Brendan Haywood³ and it is (GUESS WHAT) THEY’RE ALMOST NOT ALL USELESS!