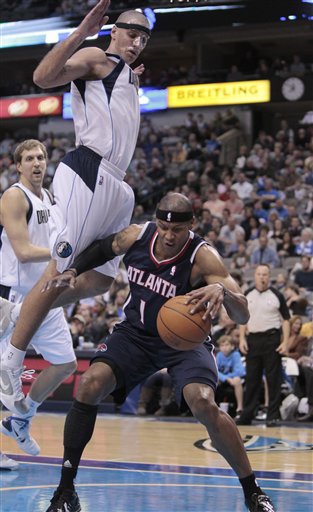 Sasha Pavlovic jumped right out of the Building and Team. 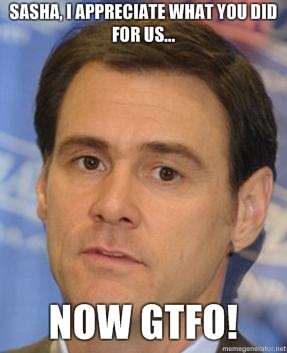 (On the run in the fourth quarter) "We put Shawn Marion on Joe Johnson head up with no double-team, and he did a great job two or three times in a row. And that gave us a cushion that led to the win."

(On Jason Terry) "The 11 assists were huge, but don’t forget, this guy was a point guard. He’s a clutch scorer and a terrific playmaker."

(On releasing Pavlovic right after the Game) "Sasha Pavlovic is not gonna be with us going forward. Right after the game I thanked him and the team thanked him for what he’s brought to us the last 19 days. He’s been an important part of us getting back on track the last four or five games. And we appreciate what he did, and the guys gave him a great round of applause in the locker room. It was a nice moment, and I’m sure he’s disappointed. But I’m also sure that he will either hook on with someone else, or if he comes back with us, then it will be for the end of the year."

(Does that mean Peja will start the next game or on the upcoming roadtrip?) "No, it’s [more] likely that Stojakovic will not go on this trip, and that he will stay here and concentrate on conditioning and the physical aspect of getting ready to play. At that point, we believe he will be more ready to step on the court for a game."

(On the Mavs inabiltiy to play a complete game) "There was some sluggishness throughout the game. There were some plays where momentary losses of concentration led to untimely turnovers which fueled some of their runs."

(On the Mav's thirdbest Center) "Haywood was a major factor in the fourth quarter of the game. He was a huge presence for us offensively. The little jump hook that he hit was a big shot early in the quarter. He made free throws, he got rebounds and he gave us a physical presence under the basket defensively."

(On Nowitzki's shooting) "He’s making progress. His offensive flow was a lot better. He’s getting closer to where he was, and that’s encouraging."

(On playing Dirk in short stretches) "He's going all out in those stretches. That's part of the process of getting back. As each game has come, he's gotten more aggressive. And the other thing now is when he takes his breaks, the guys in there have done a good job holding the fort, extending leads or erasing deficits. Everybody's picking him up, which is what we need."

(On the Wizards and their road-losing-streak next) "It's going to be our job to make sure that their first road win isn't here Monday night." 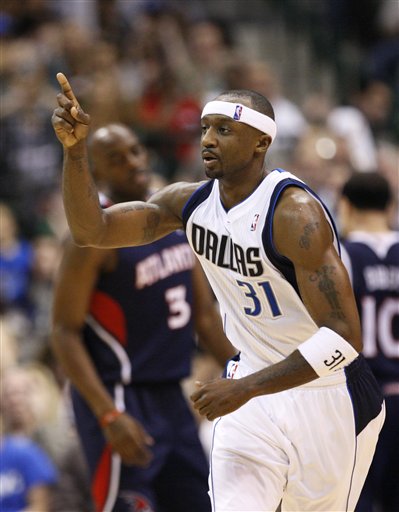 (On ATL and Craword) "It’s always special going up against my former team, Atlanta, and then the Sixth Man of the Year duel. Crawford and I were chatting all game long over who would get the leg up. So it’s always fun."

(On the Mavs Offense)"It’s about spreading it around. Offensively, guys are penetrating in and it’s beautiful. Coach Carlisle told us it’s a beautiful thing to watch when you see guys move the ball the way we do. He said there’s probably only two teams that do it in this league, and it’s us and San Antonio. Maybe he hasn't seen many Boston games, but who cares. It’s the reason for our success."

(On Sasha and Peja) "I was just stunned that Pavlovic was waived after the game. He's been tremendous for us. Not only has he provided a spark defensively in the starting lineup, offensively he's been able to produce and knock down shots. So where do we go from here? We don't know. Hopefully, Stojakovic, this means that he's going to be healhty and he'll be out there soon.''

(On the Wiz next) "One more game left on this homestand, so we need to take care of business Monday night." 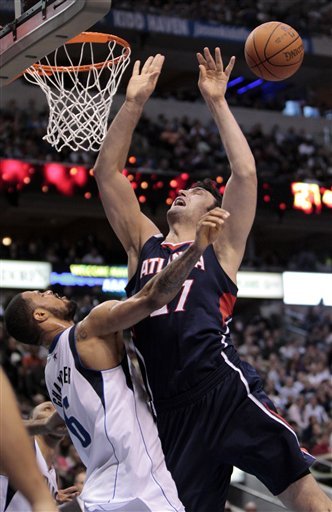 (On Pavlovic's release) "He did so much for us, he played hard. It was a tough situation coming in just learning the plays and getting thrust into the starting lineup. It's always tough when you have a guy come in like that. You welcome him in, you start to get to know him and then all of a sudden you find out he's no longer going to be with you. It's the nature of the business, so the only thing you can do is wish him well. I hope he has success in the future. He did his job for us. We all appreciate what he's done for us. He came in and gave us great effort, not only on the floor but in practice putting the extra time in trying to learn the plays.And because of him we were able to get back on our winning streak.''

(On Haywood) "He came in and he made a world of difference. He played with great energy, he was all over the floor, he got a couple of deflections, big key stops and he made himself available. He played aggressive and it was fun to watch. He was focused pre-game, he was focused during warm-ups, and when he's focused and keyed in like that, he's a huge difference for us and like I said, he definitely changed the game around.'' 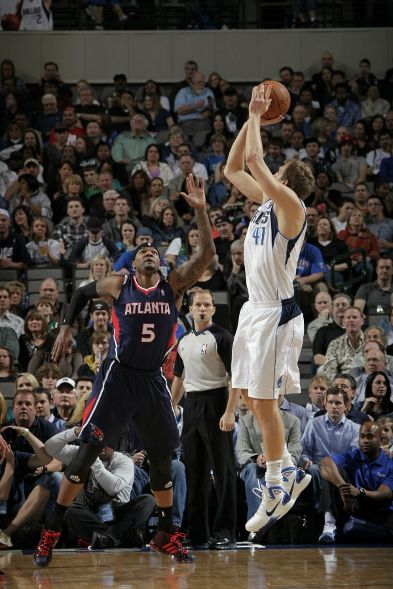 "Back to form, Jumping Jack!"

(On the Mavs play) "It's been fun to watch. In the second half, we did get stops."

(What did you do differently tonight?) "Make a shot. That's about it."

(On the run in the fourth quarter) "We were able to get some fast-break points, ‘Trix got a dunk, I made a three in transition, and it really ballooned the lead up to 10. We really never looked back from there."

(On Shawn Marion defending Joe Johnson) "I thought ‘Trix really took the challenge in the fourth on Joe Johnson. 'Trix really got in there and forced him into some tough shots, and that really opened the game up for us." 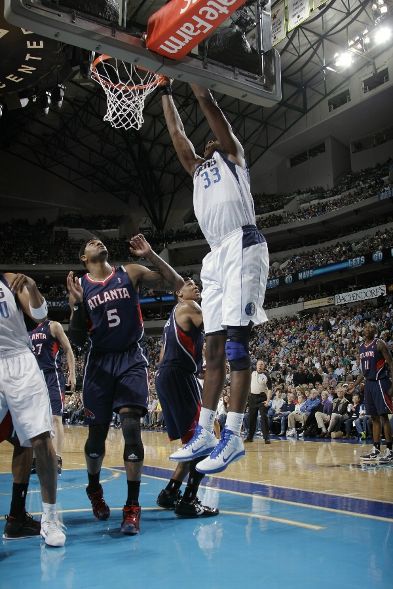 (On Signs of Life) "I just take it one game at a time and try to move forward.  I'm starting to understand what I'm asked to do there and I'm feeling more comfortable." 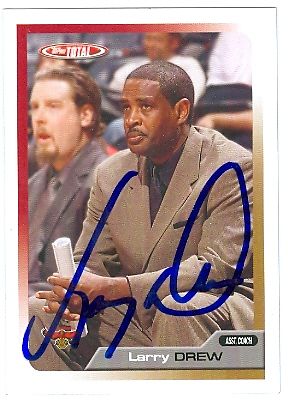 "Just for you. Sincerely, your Larry Drew."

(On losing the Game at the start of the fourth quarter) "We just have to make sure we learn from this. We've been in this situation enough times to learn from it. It's something we've got to get better at."

(So, what did you learn?) "Something very similar we took from the Milwaukee game. We played, I thought, three good quarters and then in the fourth quarter we had a collapse. Shot selection was not very good. They came down and hit a couple of shots, then Dirk hit the big three. There was still plenty of time to go in the game, but we just seemed to never recover from it.....  It just comes down to getting tougher in the fourth quarter. You’ve got to do the things that are going to assure you victory." 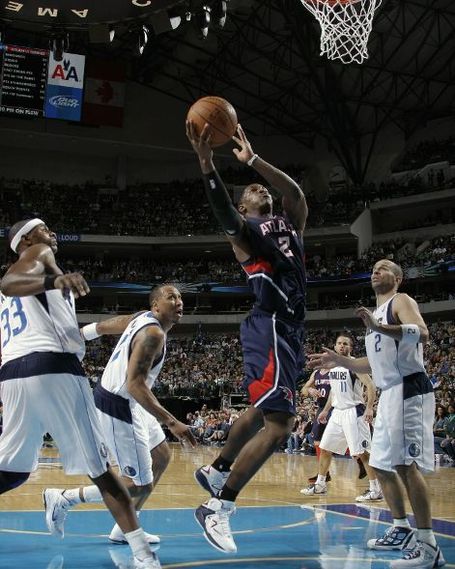 Not the fourth quarter, methinks.

(On the fourthquartercollapse.com) "This one hurt. It wasn’t anything they were doing. We had total control heading into the fourth quarter. It got out of hand and we couldn’t get back in it. Might have been the lineup...not sure.."

.....Brendan Haywood was a huge factor in the fourth quarter... Brendan Haywood led the charge on both ends of the floor and that allowed the Mavericks to break away from the Hawks and continue their winning streak.....

The nadir was clearly the sight of the Hawks, coming out of a timeout with 2:14 left in the game, completely flummoxed by the Dallas zone they'd played against for much of this game and a fair amount of their previous meeting (but not on the previous possession...tricky, Rick Carlisle, very tricky), passing the ball around the perimeter until Joe Johnson could hold it, back up, and take a contested 28-footer from the right sideline with the shot clock winding down.

Oh sure, the Hawks could have bounced back, but it was clear the Mavs, in this little 4 minute stretch of "hey, wha' happened?" had scrambled the Hawks' eggs. Game over.

Bottom line: This is what a strategy of crossing your fingers in terms of depth can lead to when you play a team that employs a different tack in that regard. And if Jamal Crawford doesn't have it offensively, which he didn't tonight---a lineup like that starting a quarter against a lineup like the one Dallas put out there means you're gonna need a bigger boat.

Haywood bricked three of NINE from the line. Celebration for our third-best Center, Beaches!

Disclaimer: If you couldn't tell by now, all italic sentences are made up thoughts, not actual quotes. Also, breaking news, the Mavs tied their shoelaces backwards and are subsequently on a 4 Game Winning streak.

The Mavs (beat/lost to) [the Atlanta Hawks ]¹ tonight (thanks to/despite) Dirk’s Awesomeness. The (cloud in the silver lining/major culprit) once more as usual was the lack of support from his team-mates, with the exception of Tyson Chandler/Jason Kidd². Especially useless  was Jason Terry/Sasha Pavlovic/Deshawn Stevenson/Jose Barea/Shawn Marion/Brendan Haywood³ and it is (GUESS WHAT) THEY’RE ALMOST NOT ALL USELESS!

³ Two at the minimum, up to all five six of them. Which is why Sasha got released....