Share All sharing options for: Blazers @ Mavs PGQ Game 34 "Learning on the Job" 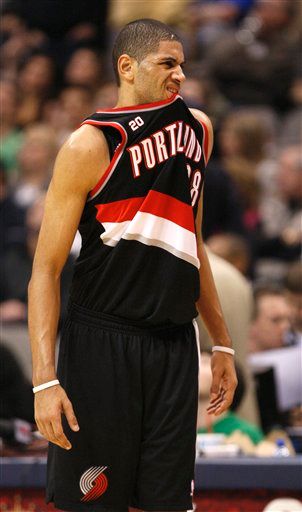 "Beaten by Terry and Stevenson? Ugh. What do you think, Patty?" 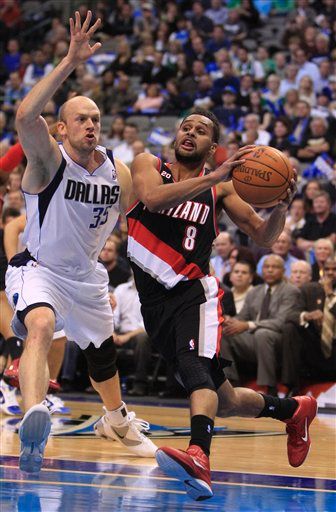 "Something's not right, mate! Bogut told me about the religious fanatics on the Mavs, but this is just....."

The Mavs (beat/lost to) [the Portland Trail blazers]¹ tonight (thanks to/despite) Dirk’s awesomeness at the sidelines. The (cloud in the silver lining/major culprit) once more was the lack of support from his team-mates, with the exception of Tyson Chandler/Jason Kidd². Especially useless was Jason Terry in Q1, 2 and 3/Brian Cardinal/Jose Barea/Shawn Marion/Brendan Haywood's FT shooting³ and it is (GUESS WHAT) THEY’RE ALMOST NOT ALL USELESS. 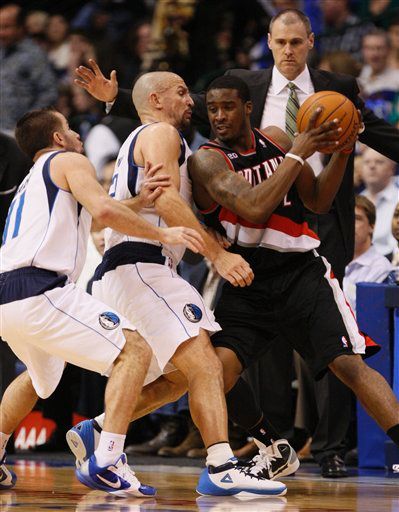 "Just a little closer and i can smack them all together at their heads.... - Damn, Caron's Injury has made me thinking quite malvolent..."

(Who is the best remaining weightlifter on the team?) "J.J. Barea gave us a great lift. Haywood was a big presence and hit a couple of difficult shots up against the shot clock that kept us going through some rough patches. Dominique played his game. He was good defensively. He didn’t really put up any offensive numbers, but in this type of game, you need tough-minded, physical guys that are going to guard, get you rebounds and be in position to help make plays to get other guys shots. And he did those things."

(On what the Mavs can do without their injured guys) "The one thing we can do as team is get better defensively. Other than the first few minutes of the game, I thought we really battled, we played a really gritty type of game, and that’s what we’re going to have to do."

(On Threevenson) "All our guys love him and he stands for what we need to be about right now, and that is just hanging in, being tough, having the guts to step into big shots, and he was great. It wasn’t just the one shot towards the end, there were one or two other plays during the game that just timing-wise were very big shots for us. And defensively, he is just going to give it to you every night."

(On Butler) "Butler's surgery went extremely well, from what I heard. He's in unbelievably great, positive spirits. He'll do great with this rehab." 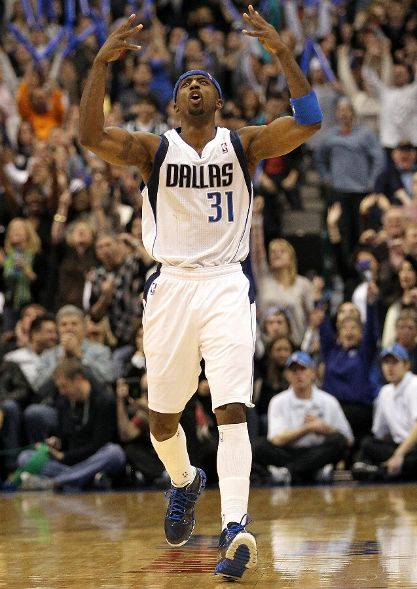 "Ghosts of the vaunted 4th Quarter, I summon thee!"

(On Butler) "We just want to say our prayers go out to Caron. He had a successful surgery today, and this one was for him. He told us to go out and get it done."

(On his shooting lately) "I had two games in a row where the ball wasn’t falling for me. People would be like I might lose my confidence but I’m a shooter so I just keep shooting.  We just kept fighting tonight and got it done."

(On his shots in the 4th) "More importantly than my shot, I mean look at what DeShawn Stevenson did. He doesn’t get nearly enough credit. This guy has been thrust into a role, he’s accepted his role and he’s come out and played well. I couldn't do that."

(On the Win) "Without Dirk, without Caron, we’re gonna have to find ways to win. And tonight we did it with our defense and a total team effort."

(On missing Dirk) "There was one play that we threw out there that we usually run with Dirk, and we executed it pretty good. But hopefully we get him back soon."

(On Dirk at the sidelines) "It really says something about him, the growth of Dirk and where he’s come from as far as his leadership. Years ago people always questioned him. I know Avery Johnson questioned him a lot on being a leader, but now more than ever, you see it, you hear it, he’s vocal. Before he did it with his play; now he’s starting to be vocal. And now that he’s out, he’s been the most supportive guy over there. Not only of me, but everyone, and guys love that."

(On the Lessons of the current Stretch) "What we’re learning is that we don’t solely have to rely on Nowitzki and that’s important because there’s going to be games where they take him away throughout stretches of the game. But, look at what DeShawn Stevenson is doing; it’s built his confidence up. Brian Cardinal. You never know in the playoffs when you’re going to rely on some of those guys to get it done. This is like learning on the job." 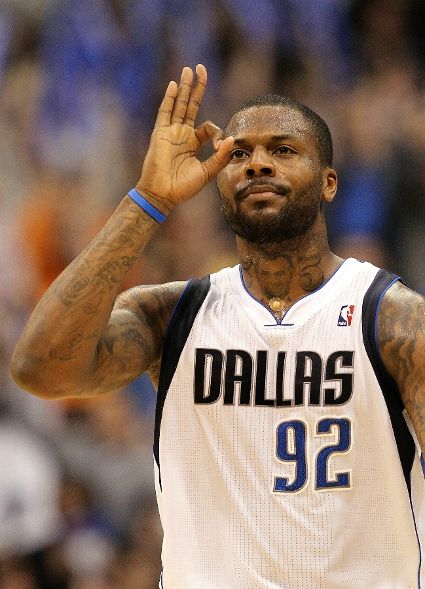 "Positive or negative Connotation? - Depends on your country."

(On Butler) "It was sad, because to me, he’s like my brother. I’ve been with him for like five years, so to see that happen was pretty bad. But I think the team needs to pick him up, and we have great spirit. We’re just praying for him, and we’ve got to keep playing basketball."

(On the end of the first half) "I came out, shot the three and got fouled. And taking the lead at halftime, little things like that, is big for us."

(On missing Dirk) "When Dirk's out there, I get wide-open 3s. Without him, my man's always right there, so the drive is open. When Dirk first went down, everybody was kind of looking around like, 'What are we going to do now?'. But wins like this let us know that we can play without him."

(On himself) "I’m just out there playing basketball. Everybody is focused on JET  and J-Kidd and I’m hitting wide-open threes. I’m just taking them. If not, I’m passing the ball, and it’s working right now." 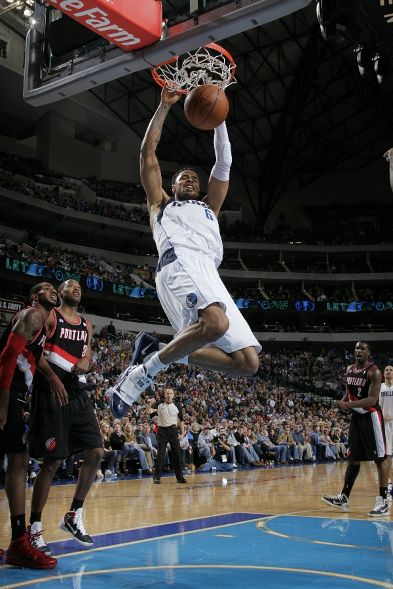 (On overcoming a poor start) "I think we just kind of calmed down and got into the flow of things. We had a game plan, but coming out there was a little confusion. But once we got that settled, it was a good night for us."

(On battling the Blazer's Bigs) "Those two guys [Aldridge and Camby] are great. They both are long, they’re both active. They missed enough shots, though, for them to come in and chase them. But they’re a tough matchup."

(On Terry) "He was huge for us and I was happy for him to get his rhythm back. When he makes shots like that, we're deadly. It was great to see him in the fourth quarter back to his usual self."

(On Terry in general in the 4th)  "The fourth quarter is Terry's show. He's done it over and over. He's so clutch, so much fun to watch." 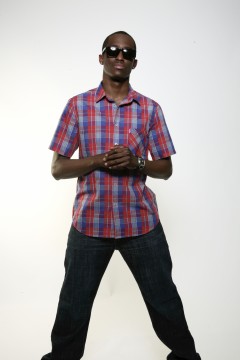 (On his progress) "We’ll see what the doctor says. But I was allowed to do some jump-shooting as of a couple of days ago. I am going to the doctor tomorrow. So, we’ll see.’’

(On his situation) "The good news is that I’m young. I have time. It is frustrating, but I know it’s the best thing to be patient.’’ 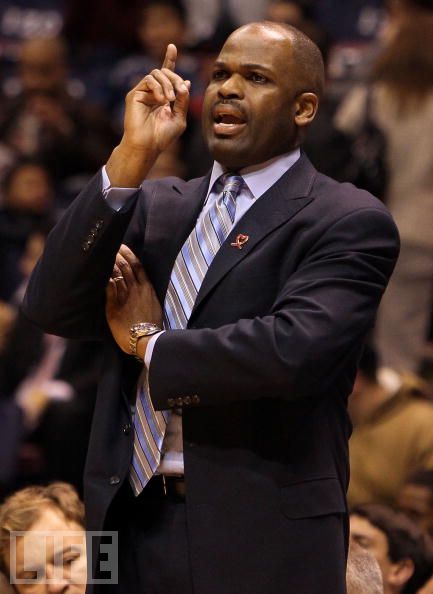 "You've got to make plays. Down the stretch. Plays."

(On LMA's final Shot) "We’ve got to get shooters out. The Mavericks were in a zone. They took away Rudy and Patty. LaMarcus came out and you’ve got to take the first available shot."

(So what do you do now?) "We need to stay focused and you’ve got to make plays down the stretch." 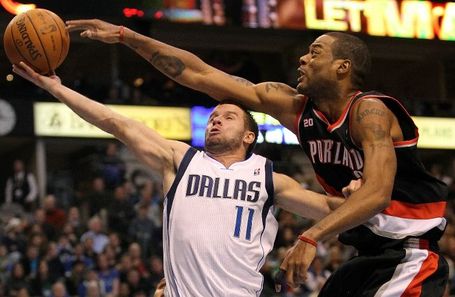 "JJ Barea takes a shot at against Marcus Camby."

(On collecting 20 boards) "Sometimes the ball bounces your way. Sometimes, I can just stand there and it will come right to me. Other times, I can be fighting with a teammate for a ball."

(On then consequently missing on two crucial lates) "The first one just seemed to elude me, which is kind of strange. The second went right over my head. I can't believe it. It's like it took a weird bounce."

Hoopdata Boxscore (Most Attempts at the Rim and from Three - shouldn't it be like that always?)

Chandler bricked one, Haywood two from the line. Celebration for our third-best Center, Beaches! [nsfw] 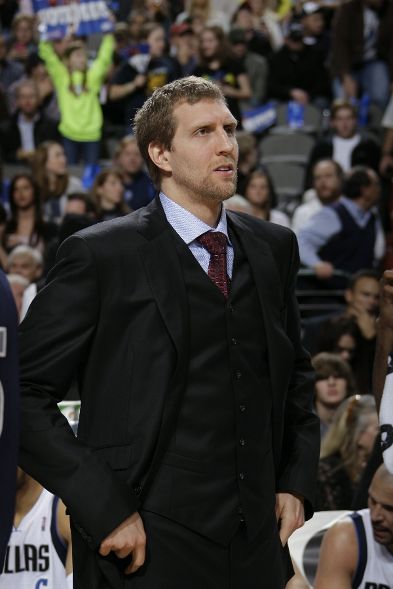 "This injury thing sucks. I'm running out of suits!"

Disclaimer: If you couldn't tell by now, all italic sentences are made up thoughts, not actual quotes. Also, about time to play some Defense again. 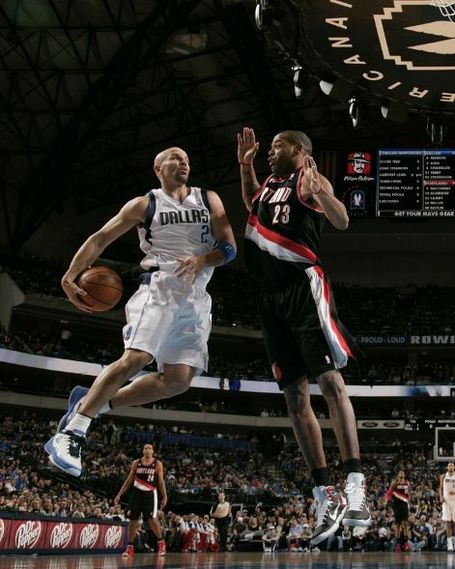