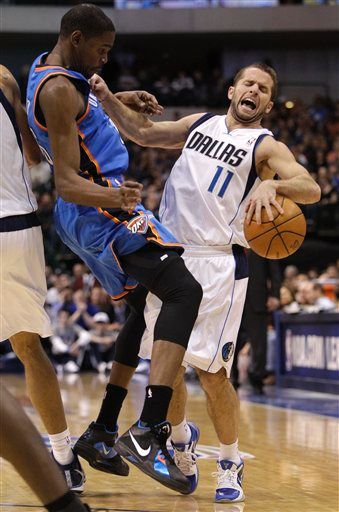 The Mavs (beat/lost to) [the Oklahoma City Thunder]¹ tonight (thanks to/despite) Dirk’s awesomeness at the sidelines. The (cloud in the silver lining/major culprit) once more was the lack of support from his team-mates, with the exception of Tyson Chandler/Jason Kidd². Especially useless was Jason Terry in Q1, Q2, Q3 /Brian Cardinal/Jose Barea/Shawn Marion/Brendan Haywood's FT shooting³ and it is (GUESS WHAT) THEY’RE ALMOST NOT ALL USELESS.

Oh, and btw....Offensive efficiency without Dirk Nowitzi in the lineup: 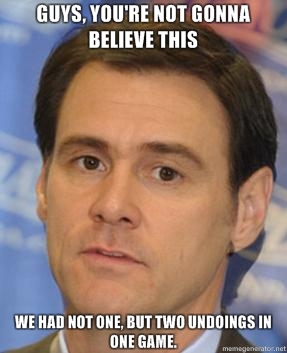 (First things first) "I really thought OUR UNDOING was not having a stronger first half. That would have put us in a stronger position headed into the second half. We had 10 turnovers for 12 points, and a lot of them were timely. I think we struggled defensively in the second half, we struggled on the boards, and the timely second-chance points were OUR UNDOING down the stretch. That is really one of the emphasis, and having said that, we outrebounded them by two total over the whole game. So, they were really just timely plays." 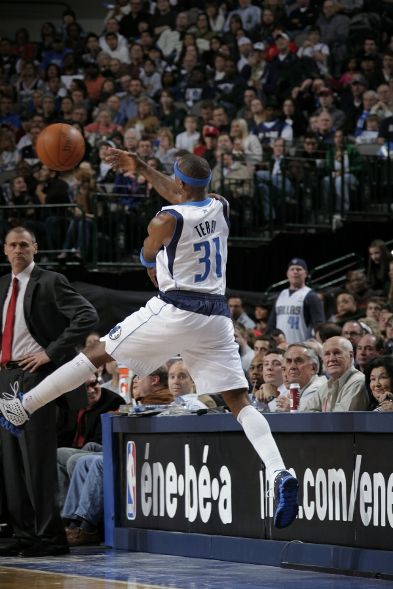 (On the imaginary Rivalry) "I was in Spain with Serge Ibaka [as part of NBA without Borders], and he made it a point to tell me that they’re our rivals. And I was like, ‘You guys haven’t really beat us that many times.’ And he was like, ‘No, we look at y’all as a rival, and we’re gonna try to beat you every time we play’. If your name is not the San Antonio Spurs, I don’t think there’s a rivalry there. But we know that they’re a dangerous team." 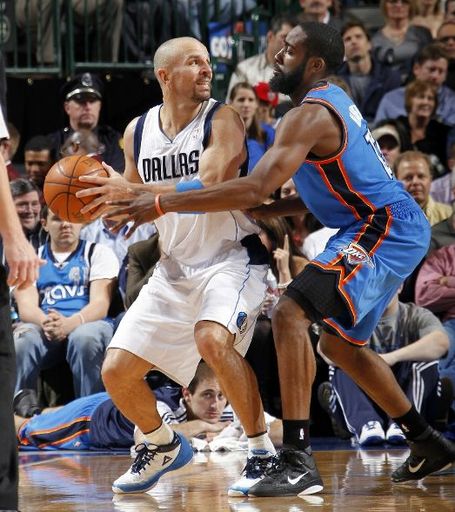 (On his bricks) "I thought I’d have a couple of shots go in, but if my game was ever judged on me making baskets I probably wouldn't be in the league. But I had some good looks. They just didn’t go in."

(On the injuries) "I think we would like to have a full team, but the NBA is like that. It's a fine line. It only takes a quick tenth-of-a-second for someone to get hurt. But we feel we're deep enough and we've got enough guys in here to get wins. You can look at it so many different ways, but I think at the end of the day we'll be a better team with Dirk getting back and us continuing to play the way that we're playing." 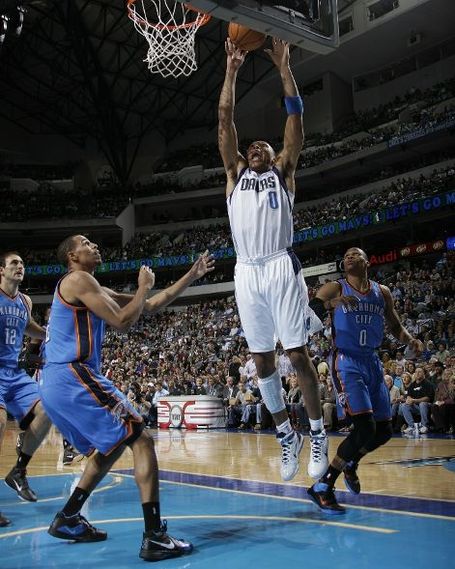 (On his scoring) "My teammates were looking for me and the ball was coming to me and I was making things happen. But our emphasis was winning this game."

(On OKC) "We had them on their heels and we didn’t put them away when we should have. We had a 10-point lead, and we should have pulled away and left them at the gate. They put together a little run, and the next thing you know we’ve got a battle on our hands."

(On the third quarter) "Well, they got their momentum going, and we went away from what was working in the first half that we didn’t do in the second half. For the most part they hit some shots and made it hard for us." 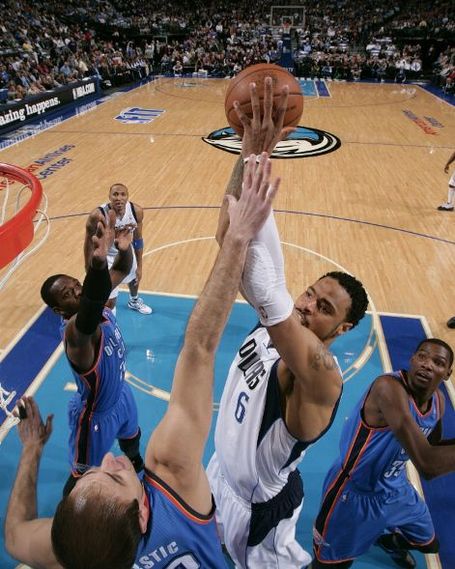 "Easy Points are something different, yet completely the same."

(On what's lacking) "We missed Dirk the entire game. He changes the game. When he’s in the game, he stretches the floor on both ends. He’s a bigger body and he plays great team defense. He gets a lot of slack for his defense, but he knows how to play team defense, knows how to funnel and communicate out there."

(On OKC) "In this situation tonight, we kind of had them on the ropes and let them off the hook. We had a 10-point lead in the first half, then I felt like the momentum changed at that point in the game. We had some turnovers and they were able to get some easy baskets. They had more energy than we did, and once they started to get a couple of the run-out dunks it seemed like that got them excited and that turned the momentum. And when you give a team like that life they feed off it, and they took the lead in the third quarter. It seems like we were never able to catch up."

(On missing opportunities) "It's just tough. When it's this time of year and you got injuries, you just got to fight it out. This is a game we definitely could have won. With guys out, we have to seize the moment. We don't have Dirk or Caron or guys who can score big points in bunches. So when we have a team down, we have to jump on them. We can't give them life."

(On the Mavs situation) "Right now, we just have to ride the ship, be patient, not get too crazy. And we’ve got to play with the players we have." 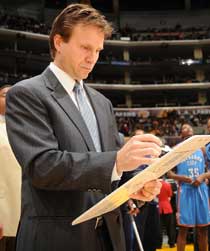 "Playing Defense for a full half... Check."

(On the imaginary Rivalry) "It doesn’t become a rivalry until you have playoff victories and playoff losses and it’s multiple years. With the location, it does make sense. But right now, they’ve been places we want to go. And until it becomes a rivalry, we have to be able to get to those places."

(On the 2nd half) "In the second half we were good defensively, but everybody knows [Dallas] is battling some injuries and they're a different team than a few weeks ago. But we did play good defense in the second half. I'm proud of the guys' effort. I thought we made a lot of good basketball plays at both ends."

(Why not in the first half, too?) "I think that was the problem, we only played defense in the second half. One thing I told our guys is it takes 48 minutes of that type of effort. It’s hard to do it but you have to do it. If you want to be a team that improves then you have to commit to that side of the floor."

(On the Win) "We played well tonight because of yesterday’s practice. Guys really committed on improving our last few games. But it takes effort for all guys to win. All guys have to be committed that way."

"Trying to rip the rim down? Good luck."

(On not losing 3 straight) "When you lose two games in a row, it kind of snowballs and you don't want that to happen. And this team [the Mavs] is good at home, and they didn't have Dirk, their best player, or Caron, but they're a fast team and players stepped up. So you had to be locked in from the beginning and not take this team for granted, and I think we did a good job of that."

(On what changed at halftime) "Coach Scott Brooks gave the team a great talk. We came out and executed and helped each other out on the defensive end."

(On the zone) "We just had to get the ball to the middle and that kind of opened things up for the three-ball, layups, fouls. We got the ball in the middle, got some opportunities and were able to capitalize on them."

KD with the Over

Hoopdata Boxscore (too many Dunks and Layups for OKC, eos)

NBAPlaybook looks at the deciding Momentt - a boinked rotation by Marion

Chandler bricked two of ten, Haywood one of two from the line. Celebration for our third-best Center, Beaches! [nsfw] 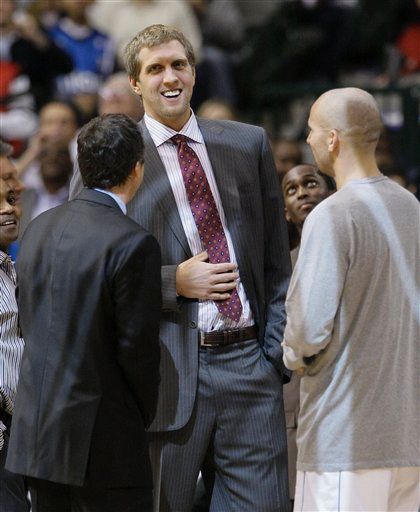 "I just hope nobody realizes that i already wore this suit before, lol."

Disclaimer: If you couldn't tell by now, all italic sentences are made up thoughts, not actual quotes. Also, Freemason.