Some More Pieces To Add To Your Schedule Knowledge

Share All sharing options for: Some More Pieces To Add To Your Schedule Knowledge 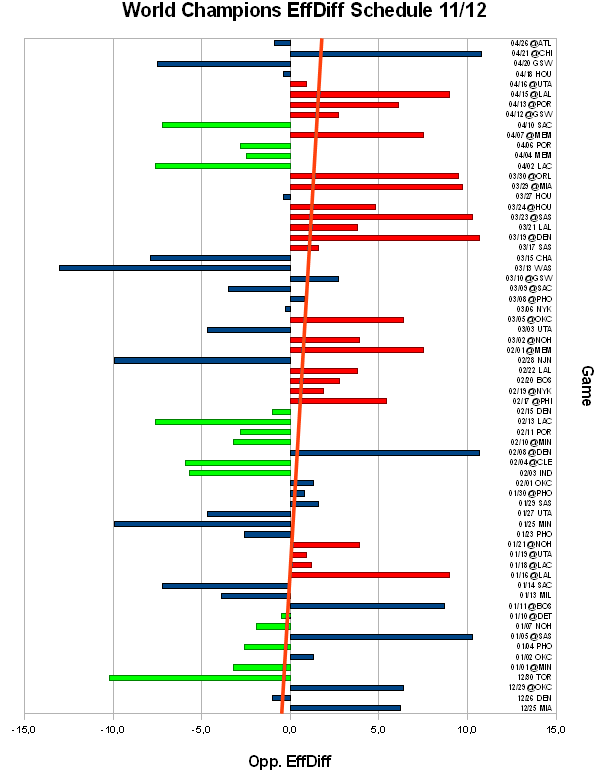 This is a minor addition to my piece about the toughness of the Mavericks schedule. On the left you can see a chart that shows the timeline of this season (from bottom to top) and the opponents strength (Home/Road Efficiency Difference from last season). Greenish stretches are easier, reddish tougher ones.

After starting the season with a Finals rematch against the Heat and then meeting their Western Conference Finals opponent from last year, the Oklahoma City Thunder, they'll play a comparatively easy stretch opponents-wise. However, the game in San Antonio on January, 5th will be the tail end of a 6in8 with three sets of B2Bs.

They will then go on a 4-game road trip starting on January, 16th, meeting the Lakers, Clippers, Jazz and Hornets. Although the numbers from last season indicate a tougher stretch, it can be questioned that Utah and New Orleans will be as challenging as they were last year without Deron Williams (and Chris Paul?).

After meeting Oklahoma City again, early February features the easiest stretch of games, only disturbed by a brief visit at the Pepsi Center in Denver, where the Mavericks historically tend to struggle.

Going into the second half of the season, the real challenges begin. They'll play quality opponent over quality opponent and have to deal with a massive 9in12 after the All-Star-Break, which ends with a B2B2B on the road against the Suns, Kings and Warriors. The overall toughest stretch, opponents-wise, seems to be from March, 17th to March, 30th. They'll play the divisional rivals Spurs and Rockets twice, will meet the Lakers and visit the Nuggets, Magic and Heat. Ouch.

So basically the Mavs could really need a good start into the season, because the schedule won't get easier down the stretch. It should also be noted that they close the regular season with playing 7 of 10 games on the road. That's a huge task by the time a win or two could really be decisive for the seeding. But the Mavs were tied for the best road-record last year with the Miami Heat and of course they are not the only team to deal with a condensed schedule. By the way: I've finalized my 'Schedule Intensity Chart', which now takes into account both off-days and strength of opponents.

Have fun with it!