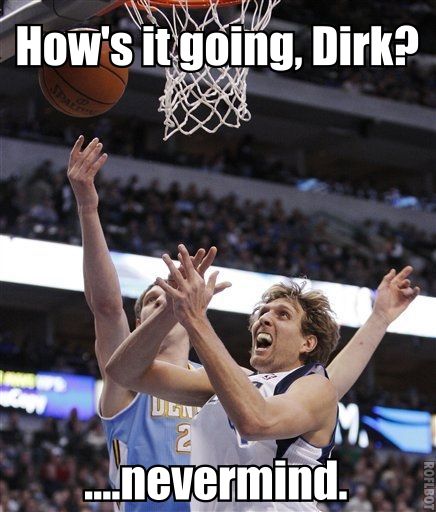 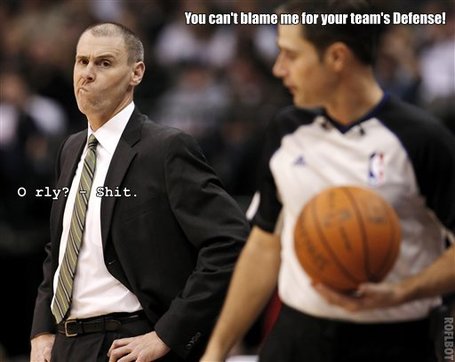 (On the Fault) "You know, it's on all of us, but it's on me more than anybody. I've got to get these guys ready to play."

(On what lies ahead) "It’s work. Look, these are good teams we’re playing. Every team we’re playing is going to be a good team. In some way, in some part, it’s just because we're defending champions. We’ve got to understand that this effort is going to come at us every night from everybody. They’re going to be lined up. That’s just how it goes."

(On the puker) "Williams did a terrific job, yes. He brought energy, brought athleticism, made plays. He was playing so hard, he threw up, That tells you that he was going at it the way you need to."

(On what is lacking) "The biggest thing is we’ve got to rebuild trust defensively. We’ve lost some. We’ve lost a lot. I’ve got to do a better job coaching these guys - simple as that."

(On responsibility) "I’m the head coach and it’s my job to make sure these guys are ready to play, and it’s clear that they’re not. Right now, that’s not something that’s easy for me to say, and it’s not an easy thing to live with. I’ve got a lot of work to do. I’ve got to have these guys ready to play. We’ve got two days before the next game. We’re going to recharge tomorrow, have a hell of a practice on Wednesday and then we’ve got to go up to Oklahoma City and we’re going to have to play a lot better.".’’ 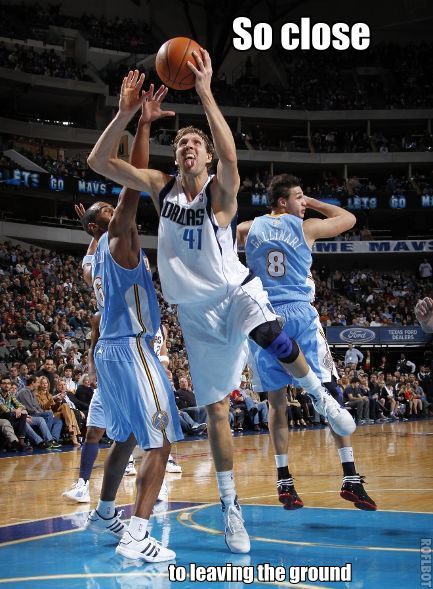 (On what's wrong with the Mavs) "It all really starts defensively. We’re having problems getting stops and then our offense looks bad, too, because we can’t play out of flow. We’ve got to take the ball out. We’ve got to play a slow-down game. We weren’t good at that even last year."

(On the Mavs outlook) "We look old and slow and out of shape - a bad combination. I still think this team has a lot of potential. But we have to turn the corner." 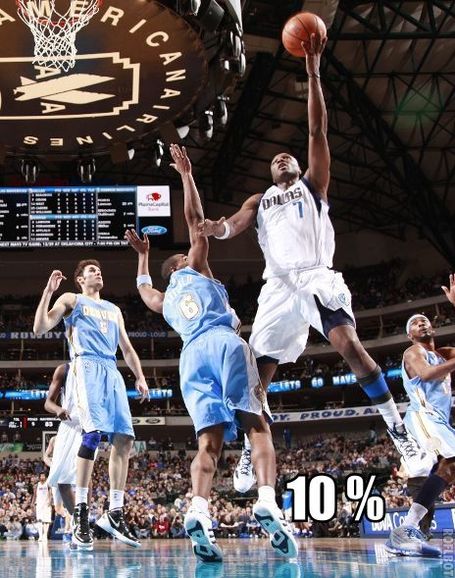 (On the Mavs) "We look like the team that's new with each other, whereas the other teams look a little more comfortable."

(On playing hard vs smart) "You can go from being great to being the goat in basketball and then make a play again, but if you don't play defense the way you're supposed to than you don't give yourself a chance to be great. We're just not doing what we're supposed to. I'm not going to say it's effort. We play hard. Just because you play hard that don't mean you play right. You can play hard, but still get your ass busted." 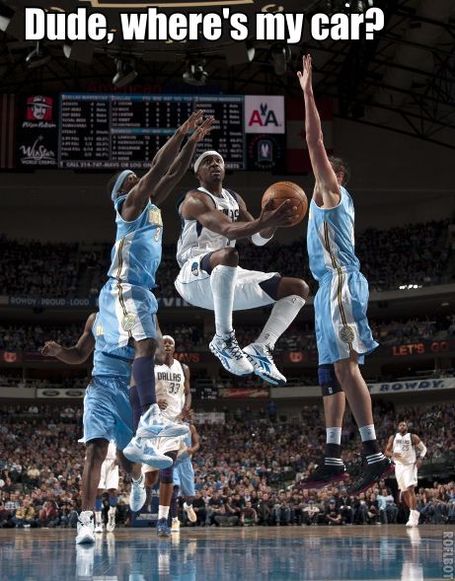 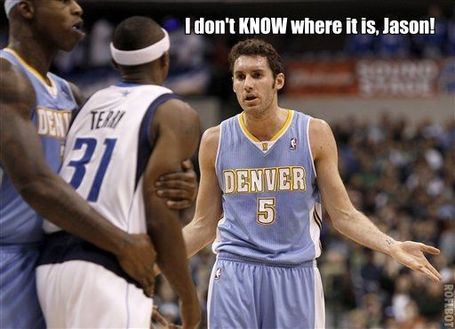 (On the Elephant) "We all together collectively have to get this thing done, but it starts on the defensive end. There’s no secret. If you can’t get stops in this league it’s gonna put pressure on your offense." 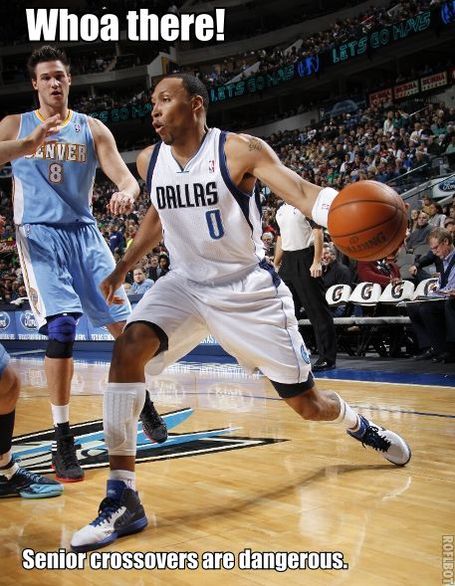 (Tell the truth, Pinkie!) "We're not comfortable with each other on both ends of the floor. We're trying to get acclimated and you can tell it's not flowing the way it should be and there's going to be some bumps."

(Miss Tyson much?) "He was our big presence inside and we need that. We all collectively got to help each other and get it. Somebody's got to be barking back there on that back line. We've all got to communicate with each other and you've got to have that presence."

(On the Lockerroom after such blowout Losses) "You get frustrated. But we got a lot of respect for each other in this locker room. We're going to get out of this together.''

(On the broken pinkie) "Yeah, it's hurting, but I'll fight through it the best way I can. It's going to take a litte bit, so I've got to find a way to get comfortable with it and make some adjustments.''

(On Williams) "He came in and was everywhere and was very active, and we need that from him. He was attacking the basket, contesting shots and creating activity in the paint, and we need that because we've been struggling.''

(On giving up 30+ quarters) "It's tough and it's frustrating. We've still got to get comfortable out there. We're not comfortable with each other on both ends of the floor. We're still trying to learn each other's games and we kind of have a new team out there and we're trying to get acclimated, and you can tell it's not flowing the way it should be, and there's going to be some bumps.''

(On struggling as the Defending Champs) "No one said it was going to be easy. We'll have a target on our back every game. But once we buckle down and get that base down, everything else will take care of itself.'' 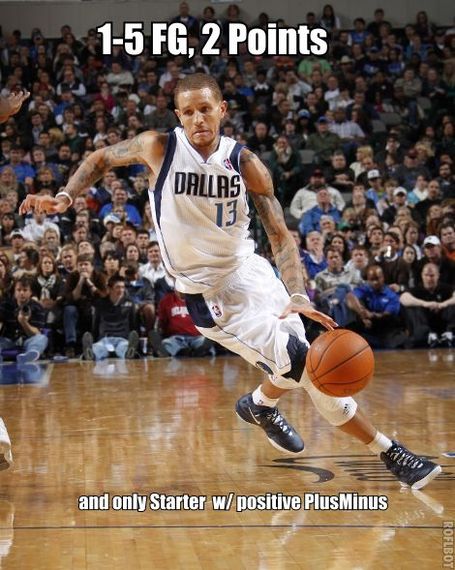 (On impatient fans and daydreaming, subtly) "We're not asking them to be patient(s). We're not saying bear with us. I think more towards the middle of January or after we've played so many games and guys get their legs under them, you'll start to see more of a consistent flow and you'll see teams where they'll fall and where they might be in June. Everyone's contribution is needed. If I played only two minutes, I'm going to play the heck out of those two minutes. In those two minutes my one play could change the flow of the game. Or I can make a game-winning play in those two minutes." 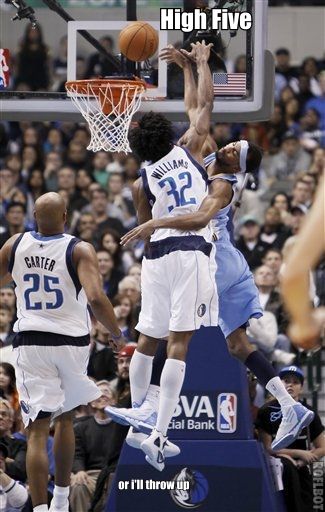 (On Puking) "It was awkward, man, pretty awkward. It's never happened to me before -- not ever, even in a practice." 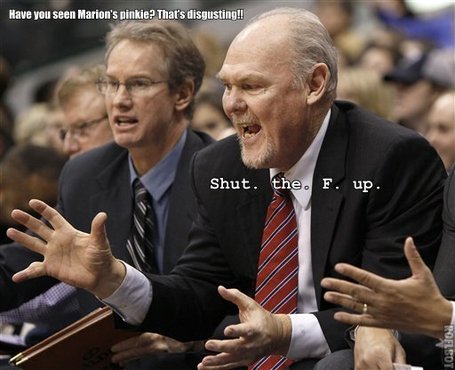 (On the Game) "It was pretty impressive the way we went about what we had to do. We knew we had a team that played Sunday, and the pace of the game has always been our advantage against Dallas. It's way too early to get crazy but it felt good." 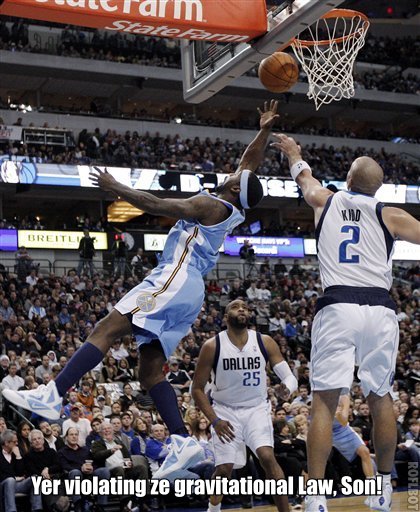 (On the Nugs) "We've been jelling real quick. I knew we'd come out strong. That's when we're good, when we get out and run. It's my job to make sure the tempo is fast and guys are running in those lanes." 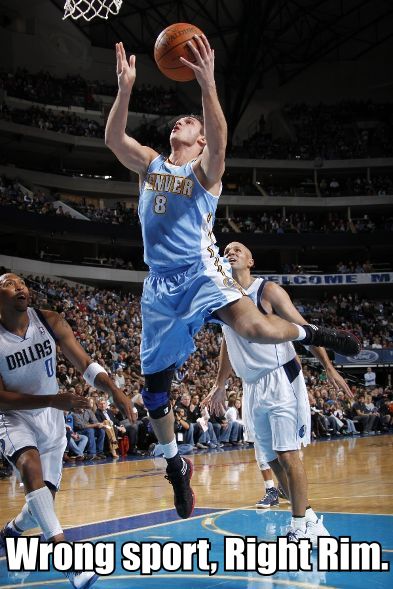 (On the Game) "We played our game, on defense and offense. When we are aggressive on the defensive end, our offense just comes naturally. We played a great game."

The Nugget's lead grew ever larger, despite the Mavs' best efforts to only shoot ill-advised three-point shots at the beginning of the shot clock.

Give the Mavericks credit: they didn’t lose this game solely on offense or defense alone, but managed to clam up and crumble simultaneously. They turned the ball over on nearly a fifth of their possessions. They started with a well-intentioned transition defense, but spend most of the game lightly jogging in the Nuggets’ dust. They allowed 117.3 points per 100 possessions. These first two games have been ugly in a way this franchise hasn’t seen in a long time, and hopefully those universal struggles don’t persist for too long.

Dallas is really old. They don’t have many athletes and outside of Rodrique Beaubois and a D-League player named Sean Williams, you did not see any energy and enthusiasm out of Mavs players tonight. Clearly the fatigue factor was huge but I was a little surprised at the lack of gusto the Mavs showed after a bad loss to the Heat last night. Sean Williams, by the way, was a bright spot for Dallas and he embarrassed the Birdman multiple times in the second half. There was also an embarrassment of his own when he went to the bench after playing 11 minutes and vomited all over it.

There just wasn't much that went wrong for Denver tonight. They finished the half on a 22-1 run and never were in trouble of losing the lead. It was a very impressive road win and one that should be discredited because Dallas was on the second of a back-to-back. In these next 65 games we will see some wild stuff and these games are going to keep coming and coming. Teams will have to learn how to find the energy to play night after night and it looks like the Nuggets are deep enough to do some major damage this season.

Consecutive stunning home blowout losses in which the listless defending champions trailed by more than 30 points in each game had a sullen Dallas Mavericks coach Rick Carlisle shouldering the blame Monday night.

Haywood bricked three of four from the line. So far he is sporting a solid brickrate of 75%. Celebration for our third best Center, Beaches! [nsfw]

On the other Hand, Dirk missed no FTs. Carry on. 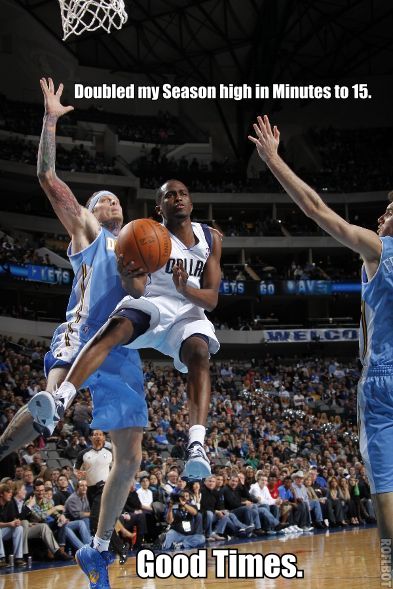