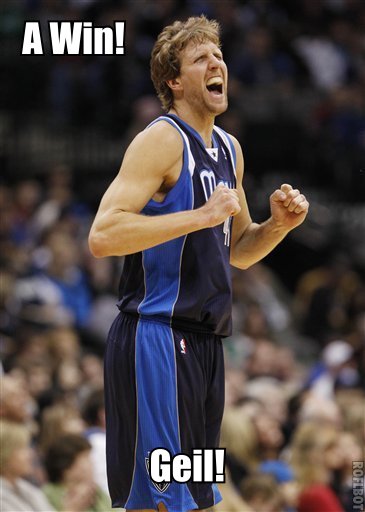 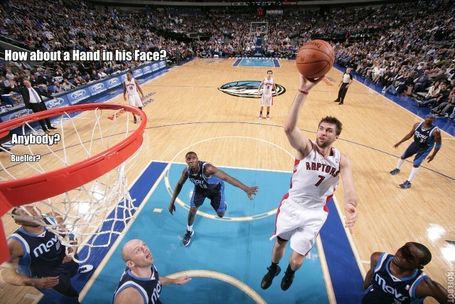 (On the Key, the Secret) "Tonight wasn’t perfect, we gave up two significant leads. But I thought the key part of the game was the end of the third when we were on a 16-2 run with Dirk on the bench. That gives us a huge lift."

(On Yawn) "He’s improved a lot. He gained a lot of confidence with what he did in the last three games of the Finals. I know this was a career high in points for him, but the last two nights he's given us a really high level of energy. He's given us a physical presence, he's a combative guy, and he was really big for us tonight. It wasn’t just the points, it was defensively in the right place. He’s aggressive, he’s talking, he’s making great strides and I thought really he and Beaubois were really key guys on the second night of a back-to-back being able to finish the game. We didn’t have to finish those last three minutes with Dirk out there or Jason Kidd. It really helps as we go forward."

(On who's your best Center) "We’ve got good options. We need everybody. It’s not a glamorous position on this team and never has been. It’s a dirty work job."

(On Carter) "It appears that we have something good going there. I don’t want to rush to judgment on anything after four games.To me, the best thing about this is that he can come off at 2 or 3."

(On the Mavs) "We're playing better basketball. The first couple of games were horrible. The last couple of games are games we can build on. We can’t have hangovers on losses or wins .Take a look at the schedule. It looks like a Major League Baseball schedule. There’s a jillion games. Games are going to be hard all year. Tonight is probably a template for how we’re going to have to play a lot of nights. Eleven guys played when it counted. Brian Cardinal went in the game with three-four minutes left in crunch time and went out there and really played perfectly. We need that."

(On what next) "Right now, it’s about continuing to trend the right way, especially on the defensive end."

(On the Raptors) "Last year at this time, they beat us here in this game at the AAC. That was a really tough night for us. It’s a skilled team. Now, as you can see, they’re gaining a defensive mentality. Watching their scores, they’re holding teams in the low 40s in field goal percentage, and they’re doing it playing a playoff style. I give Dwane [Casey] a lot of credit for the approach that he’s taken with that team. It’s the right approach for a young team that’s in a position to make some quantum leaps. For my money, I think they’ll be in the hunt for the playoffs in the east." 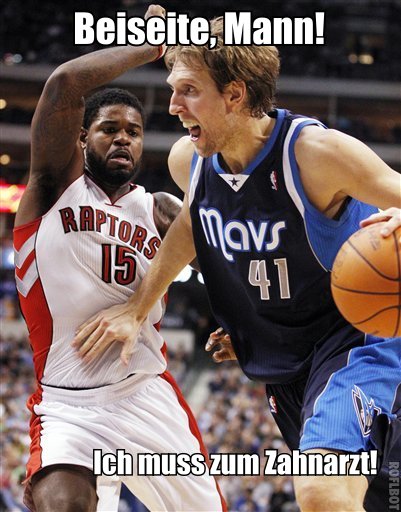 (No questions for you today, you missed a Free-Throw) "....Bei euch piepts wohl?" 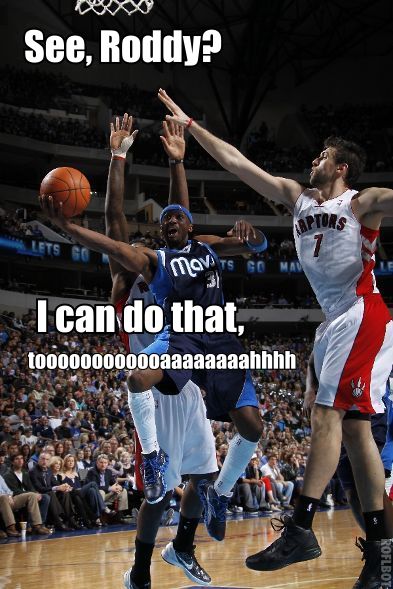 (On a Win) "We knew it would happen, it was just a matter of time. We thought it would happen last night, but unfortunately we had to take a bump along the way. But the way we played last night gave us some confidence. Now that we know how we have to play, we're a confident team."

(On Odom) "Lamar Odom is a big key to the success of this team this season. I believe once he gets right, we’re going to be tough to beat."

(On Yawn) "We've seen him do that in stretches. The question for him is, can he do it on a consistent basis?"

(On Minnesota next) "That’s going to be a fight. It’s good to see an old friend in JJ Barea." 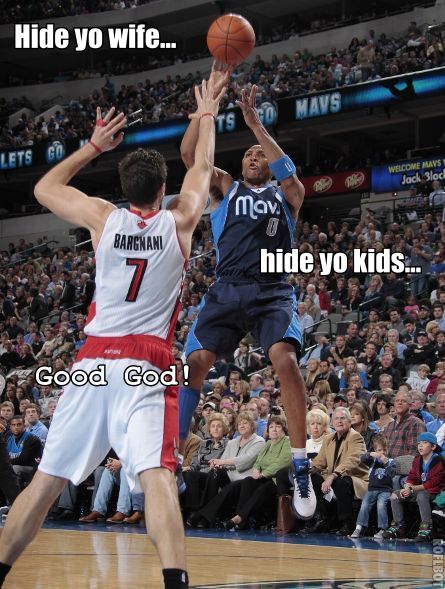 (On Mahinmi) "He had an amazing game. He was making himself very active in there."

(On the Mavs) "The communication was up tonight. You can feel it, and the sense of urgency was there, as well. As long as we keep that we’ll be OK."

(On Carter off the Bench) "We all make sacrifices. It’s all about winning.

(On Minny next) "A young, exciting team.We’ve got to put our track shoes on and be ready for another race." 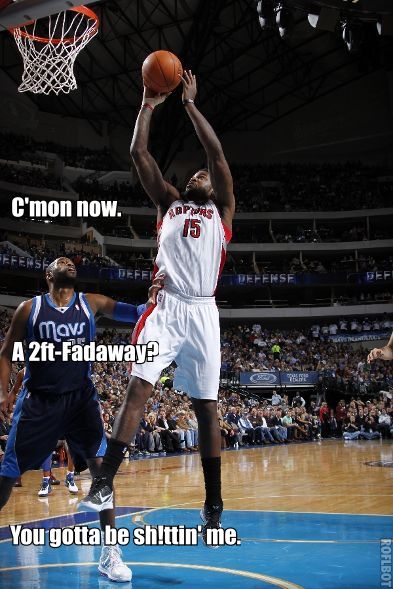 (On coming off the bench) "At the end of the day, it’s about the team winning. We need everybody."

(On adapting) "I’m comfortable. I’ve taken the time out to learn the plays."

(On the Mavs System) "It’s just the way they play. Just make plays, move the ball and there’s no pressure." 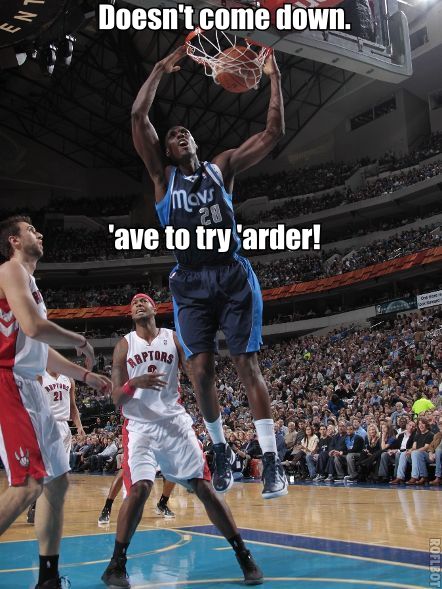 (On his Game) "Tonight, I was just trying to make plays. Obviously, we were on a losing streak, and I did everything I could out there to get that win. Tonight, I did a pretty good job at that. I knew exactly what I was supposed to do on the pick-and-roll. That’s really one of the things I like to do is play pick-and roll defense, so I just want to do it and execute it exactly the way they had it on the plan."

(On the Mavs) "For the team to be successful we've got to give this effort every night, so this is our goal. When we are out there we have to go after everything. We have to do the dirty work."

(On his role) "I’m just willing to do anything to help the team. I’m the backup guy right now, so I’m just going to keep working on my craft."

(On getting 19 Points) "For me to play with Vince, J-Kidd, Dirk, Shawn and Lamar, they’re taking all of the attention, so I’m all by myself."

(On the Need for Center Production with Tyson gone) "It puts a lot of pressure on us, but it's good. I think it's good pressure. Me and Brendan and Sean, we want that type of pressure, we want more minutes, so now we have the opportunity, so now we just have to go out there and take it." 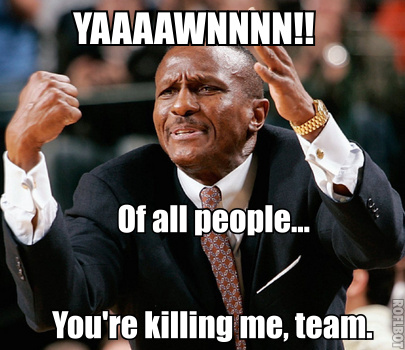 (On not closing) "It’s knowing how to win, we’ve got to understand how to win, how to beat a championship team. You work hard to get a 68-61 lead and we have to learn how to close it out. It’s a mark of a young team versus a veteran team. We’re learning. Again, it sounds like a broken record (but) I like our effort. We’ve just got to take that next step in decision-making in crunch time."

(On Mahinmi) "Ian’s a nice player but we can’t let him come in and affect the game. We’ve got to respect him and get our rotations crisp on him. We had some breakdowns defensively on people other than a guy named Dirk Nowitzki. We expect that form him, but not from somebody else.’’"

(On playing 3-Guard lineup in the 2nd half) "We needed scoring. We took the lead, they fought back and we got stuck for long time, I think it was on 77 and I thought we needed scoring in the game."

(On turnovers) "In crunch time, we have to make better decisions. Read the passing lanes, cut harder, V-cut to help the passers, all those little things that when you’re a winning, championship team, you make those plays and we have to do that." 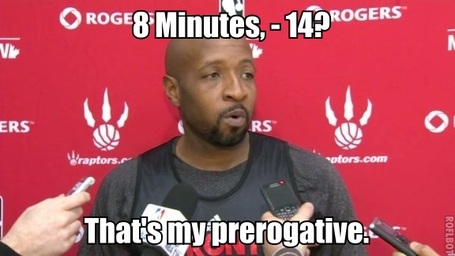 (On losing the Lead) "We had just went up by seven or whatever it was and I was like, ‘We can’t get up and jump in the air when guys come to the bench. We have to act like we’ve been there. That’s going to be one of the things I tell the guys: We have to keep our focus and continue to do what got us the lead. We got happy and got complacent; we can’t do that anymore. That was a big mistake and we’re going to learn from it."

The question we all want to know is, can we unpanic now.

The answer is yes, of course, if you were panicking ,but also a little bit no.

In my mind, what really stood out in the fourth was how self-possessed Roddy Beaubois was. It’s always seemed to me that that particular youngster is always going for 40 points or nothing. Tonight he played the point admirably, played defense with a surprising scrappiness, and basically looked like an actual NBA player— despite the fact that he didn’t light up the score board. That was encouraging.

We’d also be very remiss not to point out the superb offensive play of Ian Mahimni mentioned above, who not only dunked, but looked smooth and polished on a couple of jumpers and moved very well within the offense. He was also 7-11 from the line which is not only not too bad for a center, but is a sign of how far his game seems to have come, since last year 11 free throws was inevitably something Ian would gift the other team with, rather than take personally.

Dallas was led by the usual suspects of Dirk Nowitzki, Jason Terry and Shawn Marion, but Toronto regressed to their 2009-10 ways and allowed Ian Mahinmi to be their first "Stub of the Night" of the season. Mahinmi wrecked TO inside with 19 points and 5 rebounds in under 30 minutes of action. More importantly, he got to the line 11 times, almost equally Toronto's total on the night. The Raps inability to get to the charity stripe is a hidden story so far this season in fact as they've averaged about 13 trips to their opponents 30, something that has to change if the club wants to get back in the win column.

The Dallas bench blew the Dino's bench out of the water; outscoring them by 30 points.

For the second straight game, interior defense was also major issue for the Dinos. Much like Hibbert in the previous game, Ian Mahinmi was just too much to handle inside. Mahinmi posted a career high of 18 points; which is just the 10th time in his four year NBA career that he has scored in double figures. Interior defense It is something Toronto can make strides toward correcting this season, and for short stretches Magloire can pitch in, but this is something that is probably going to take a personnel change in order to shore up, particularly at the 5 spot.

The "coming home to face your demons" edition.

Terry has fantastic pick-and-roll chemistry with Mahinmi, as the two ran a series of high (and I do mean high; Terry’s initial action often occurred beyond the three-point line) pick-and-rolls that created open opportunities for either Mahinmi or one of the Mavs’ perimeter shooters. That’s the second straight game with frequent connections between the two, and could be the preliminary signs of a fun, unexpected pairing a la J.J. Barea and Brandon Bass.

Haywood bricked two of four from the line. So far he is sporting a convincing brickrate of 66%. Celebration for our third best Center, Beaches! [nsfw]

On the other Hand, Dirk missed one FT. Crazy! 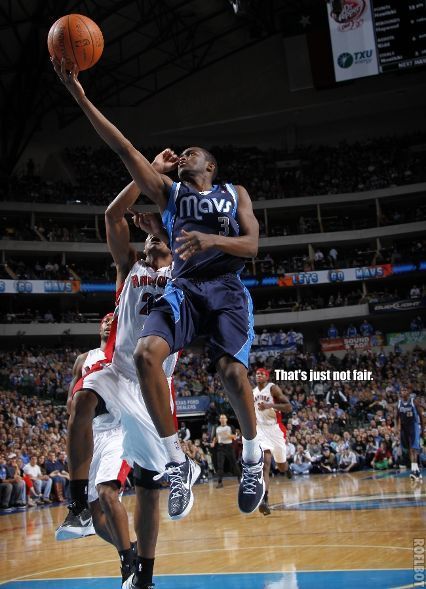