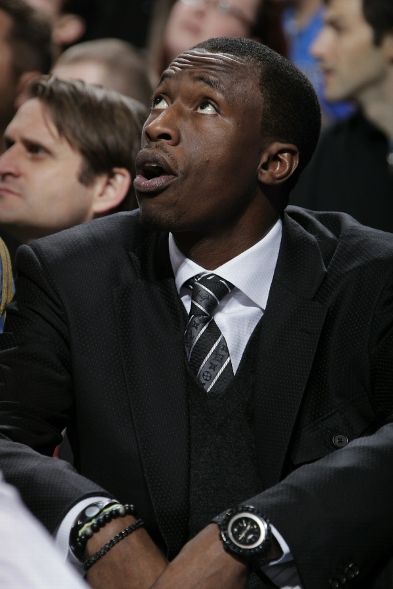 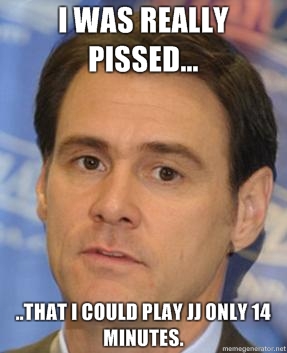 (On the finished home stand against subpar competition) "It was a good home stand. We accomplished our goal. We wanted to win all of the games. None of them were easy and we knew that they would not be."

(On Brian C.) "Cardinal did a great job. He has not been playing at all in any of the games, and he was ready to step in and start, knock down shots, defend and get rebounds. And he took one or two charges. He is a constant. We know what he’s going to do out there and it gives us a great option."

(On ripping his players during a 2nd quarter timeout - Lol you mad?) "I was mad. Really it was the maddest that I have been all year. The Players responded and from that point on we played much better. At that point we were playing a losing brand of basketball, and they will tell you the same thing. We picked it up at both ends and we started competing better."

(On Chandler) "Eighteen points and 18 rebounds is an unbelievable line for 30 minutes of play. He always gives everything that he has out there."

(On the Wizards) "They're a persistent team, they're going to win some games on the road. For all the games that they have lost, they compete. They make you play offensively and if you don't they run through you."

(On the Roadtrip coming up) "We have a little momentum and we want to bring it on the road." 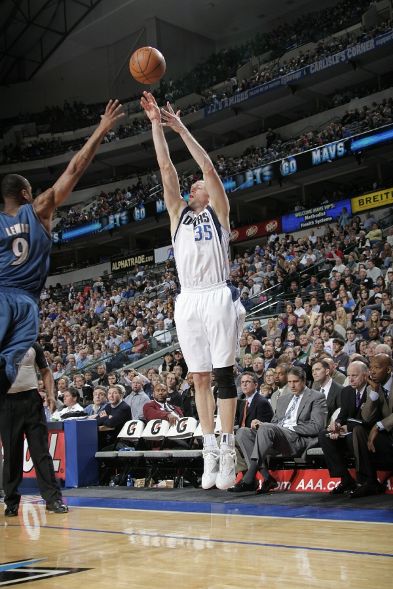 (On his stint on the Mavs) "It’s a privilege to be here with the Mavs. And anything I can do to help us win, whether it be diving on the floor, taking a charge or trying to get a stop on defense, I’ll be more than happy to do it." 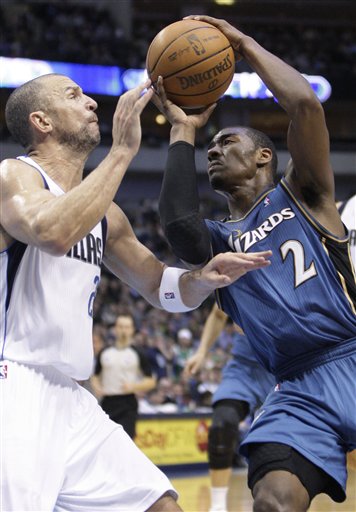 "Time for some chop suey fu.."

(On Carlisle going bananas) "He got upset, but I think he got his point across. We came out a little sluggish, but we played through it."

(On the Wiz) "They've got some talented guys that know how to play and can put the ball in the basket. We made them take tough shots and gave up some offensive rebounds that we didn't want to, but we got some great looks on the offensive end. This is a tough team to play, no matter what they're record is, they come out and play hard." 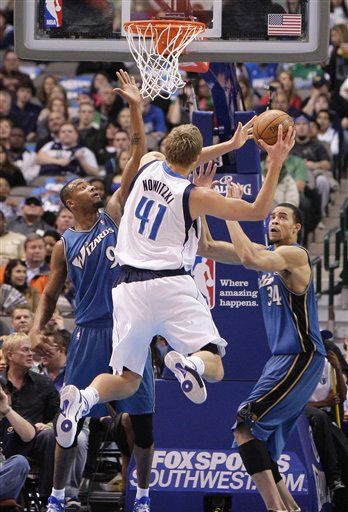 "The young high-flyer running around and jumping all over people. All Hail Charley Rosen!"

(On the first quarter) "There was just not a lot of energy going. They got whatever they wanted."

(On responding to Carlisle's rant) "We finished the half on a nice little run. So, the end of the half was definitely big for us." 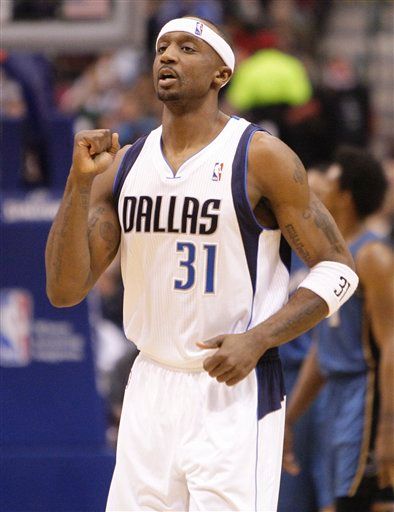 "YES! Most Shotattempts on the Team!"

(On Chandler) "Tyson’s an All-Star. I don’t know how many times I have to say it, but he needs to be in that game. He’s the best center in the West. I mean, you name another center in the West that’s better than him, night in and night out."

(On Carlisle's timeout) "We don’t want to make him use them, but when he does, we know what it means. We responded well." 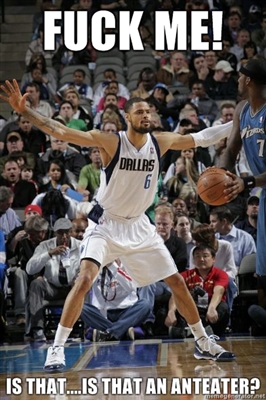 (On Carlisle slamming his clipboard) "If you’re going to throw it down, you’ve got to break it. You’ve got to go hard or go home."

(Ok, seriously..) "We know coach is a passionate guy and wants us to win. If that’s the way he’s feeling at the time, if he feels like we’re not giving a valid effort or our mental focus isn’t there, he’s got the right to do that. He was frustrated and he had a right to be frustrated. We were making some mental mistakes out there, lack of focus, and we turned it up at the end of the first half and in the second half and ended up with a win."" 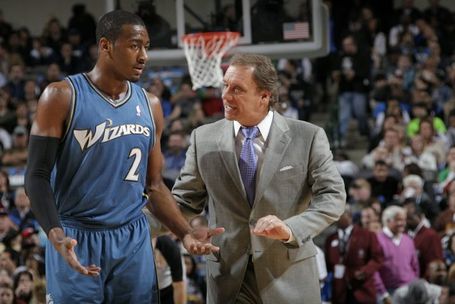 "Damnit John, if we ever want to win a game on the road, you need to give the snacks to the Refs, you can't just eat them all by yourself! This isn't really a hard concept to understand! "

(On almost winning) "It’s tough when you struggle and put yourselves in a position," said Wizards head coach Flip Saunders. "Key calls can change the complexion on the game. You’re looking to get a break and there were some obvious ones and you hope to get them. But we didn’t get them. Our guys fought through."

(How hard it is for the team to win without a lot working in their favor? Give me a really long answer -via WP) "That's who we are. When you're young and you're not as talented as the team you're facing, and you're facing good teams -- this is a good team -- you don't have a big margin of error We've gone out and we've competed. [Trevor Booker] went out and competed, got in some foul trouble and he didn't back down. John [Wall] bounced back in a very positive way. Our young guys are expanding. From a standpoint of what we're trying to do, it's tough to say we've lost 24 in a row. It's tough to say. But you know, we know where we were when the season started. We're doing things based on where we're going to be next year and in two years. Kevin Durant, you look at where they are, his first year, they won 20 games...Sometimes, you've got to go through some growing pains. Is it tough at the time? There's no question. Is it tough on your fans? There is no question. But you hope that they understand and they see, our guys, they don't quit. Do they get down on ourselves? Yes, that happens because of maturity, but they don't quit and they get out there and they compete. I've never gone through a stretch. It not like we've lost 24 in a row, because you go home, win two and you forget about it, until you come back on the road and are reminded. Even though our guys have always bounced back from a bad performance and they keep a positive attitude. We work on development everyday and our guys are getting better. We're going to get one. Hopefully sooner than later."

(On the streak) "We've had some bad stretches on the road but we haven't been a team that's quite horrible on the road. If you look at us play you wouldn't think that we've lost 24 straight. We've just got to keep on going." 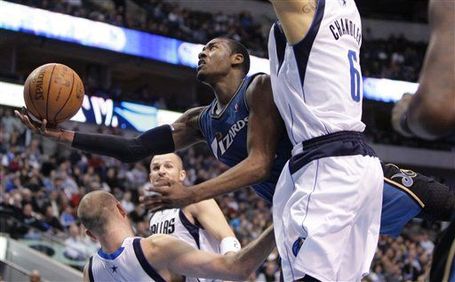 "Sorry Brian, but you got hit by a Wall."

(On Kidd's over the backboard-no whiste-play) "I thought it was out of bounds. They didn't make the call. Even though they didn't make it, you've still got to play until you hear the whistle. It was a big possession and they got the 3. It was tough for us to come back from there."

(On the road losing streak) "You think about it every time you lose a game. You're disappointed and you've got to move on. We've got one more road game tomorrow at New Orleans, and I think we're close to getting a win. We've got to learn how to finish and make the plays down the stretch."

(On the Mavs) "We knew we was playing against a talented team, that's lost a couple of players, but they still are one of the best teams in the West Coast, still can score in various ways and we got two great closers down the stretch in Dirk Nowitzki and Jason Terry. We fought. It's tough, down the stretch, ball didn't fall our way and shot didn't fall our way, but I thought we competed very hard."

It’s practically heresy to wish the Mavs to be less than they are, but every time Ian Mahinmi (seven points, two rebounds, one block in just eight and a half minutes) hits the court I think of what it might be like if this team were in a different place. Mahinmi isn’t a cornerstone, but his activity level is impressive. Mahinmi’s feel for the game isn’t natural. He’s worked hard to get to where he is now, and it’s unlikely that he’d ever evolve into stable, starting center material. But wouldn’t you love to know for sure? For now, Mahinmi is a better player than the Mavs can find minutes for, but he’s a terrific luxury to have.

"We’re going to get one, hopefully sooner than later," the coach eventually concluded in his post-game session with the media, as seen on Washington’s Comcast SportsNet. The Wizards are building hope on a 0-24 road record, but it is worth taking a closer look at some nuggets of development from the Wiz Kids.

Haywood bricked 2 of TWO from the line. 100% Fail rate! Celebration for our third-best Center, Beaches!

Disclaimer: If you couldn't tell by now, all italic sentences are made up thoughts, not actual quotes. Also, breaking news, the Mavs tied their shoelaces backwards and are subsequently on a 5 Game Winning streak.

The Mavs (beat/lost to) [the Washington Wizards ]¹ tonight (thanks to/despite) Dirk’s Awesomeness. The (cloud in the silver lining/major culprit) once more as usual was the lack of support from his team-mates, with the exception of Tyson Chandler/Jason Kidd². Especially useless was Jason Terry//Deshawn Stevenson/Jose Barea/Shawn Marion/Brendan Haywood³ and it is (GUESS WHAT) THEY’RE ALMOST NOT ALL USELESS!

² Only one of them, mind you. Chandler had Game-high 4 TOs and bricked 6 FTs. SIX!