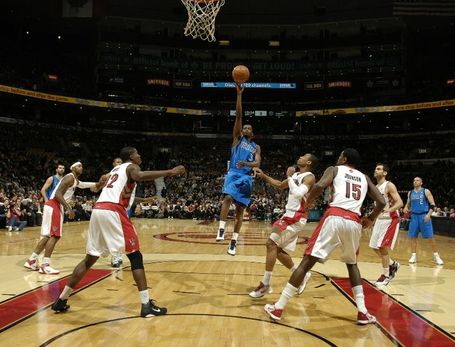 Dirk Nowitzki scored the first two Points of the Game on a Jumper and then hit the 6-minute-snooze button for the Mavs. Down by 19, Dallas then pondered whether to wake up or sleep through until halftime. Decisions, Decisons... 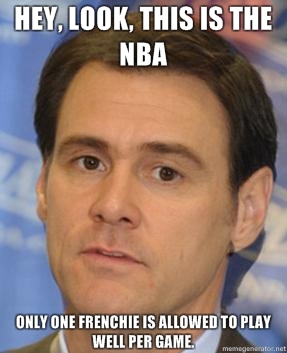 (On his motivational skills after the 3-22 Start) "This isn't about speeches. When you get to the end of February in an NBA season, these guys know where it's at. They're experienced enough and veteran enough to know that if you come out and aren't ready to play at a high level you're going to get your face smashed in and that's what happened to us early. We took the hit and we fought back. And some nights, that’s how you’ve got to win."

(On the B-2-B) "We played last night, so we knew that we would have to work this game from start to finish. And in the second half, we got some traction."

(On not losing the car key) "I thought one of the real keys to the game was when Marion started the third quarter to match up with Amir Johnson. And he had a tremendous all-round third quarter for us, and I thought that energized our team and got us the lead."

(On the 2nd half) "We got some consistency with our defense and we became a lot more efficient with the ball in the second half. We depend a lot on our bench to produce for us, to give us energy, to give us defense. Because, frankly, the starters sans Dirk didn't bring it." 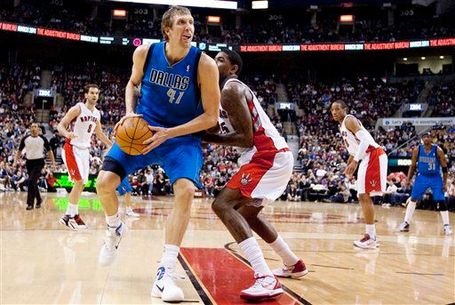 (On early) "That was ugly early. We couldn’t really get any stops. We actually had some looks that rolled in and out. Everything was a little too easy on their offensive end. And we were a step slow to everything."

(On the Savior) "I thought our bench really saved us. Some nights the starting five just doesn’t have it for whatever reason - fatigue or no rhythm, whatever. But our bench was phenomenal. It really changed the game when ‘Trix and JET came in. Mahinmi was great all night long and J.J. did what he’s been doing. So, the bench really won us the game."

(On Veteranimosity) "Well, we're definitely one of the oldest teams in the league. We've basically seen it all in this league. Kidd is like 40 years old, almost. We have a bunch of veterans who have basically seen everything in this league and it was early. That's a good thing. You don't want to be down 15, 20 in the third, fourth quarter, but it was very early and our bench came through for us and they won us the game." 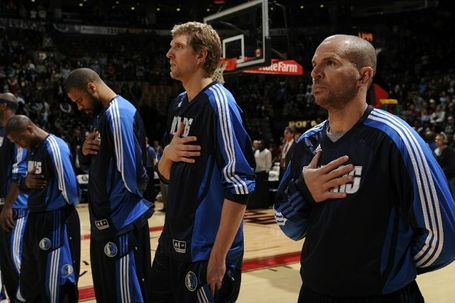 "The Dallas Mavericks during the National Kidd Anthem, before the Game."

(On the first 6 Minutes) "The best thing about tonight’s game is that the early deficit kind of woke us up. Nobody panicked, nobody had their heads down. We had some great looks that didn’t go down. The unfortunate thing is we didn’t play any defense for the first five minutes, and so they scored and we didn’t and we find ourselves in a hole. But not one guy broke and tried to do it by himself. Guys stayed in the system and once we got the game close, we felt it was just a matter of time that we could break it out our way. Hey, there were times in the past when we might have said, 'That's it. Let's get through customs and get out of here.'"

(On going deep) "This might be the deepest team I've ever played on. You've got 12 or 13 guys that can start."

(On the start) "It just took us a little while to get our legs warmed up. We had to wake up some time sooner or later. They had a day of rest, we came off a back-to-back. But once we got warmed up they still were hitting some shots, because they got their confidence early."

(On the 2nd Half) "We were able to buckle down and get some stops, multiple stops, and open the game up."

(On the Mavs) "We’ve got guys that can step up and have a big night any night for this team. And that’s the great makeup of this team. Speaking of Makeup, anybody seen my Bracelet?" 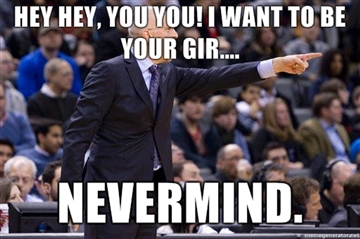 (On the Mavs 2nd half) "They decided to lock down. Bargnani is out and I don't think they let DeMar DeRozan have an easy catch all game. Jason Terry did a heck of a job denying him over the whole court and he had to really work to get it. That's what you try to do, bear down on the guy that's going to try and lead this team, and they did a pretty good job.They made it hard for DeMar to get any good, clean catches and they were there when he tried to drive. There were one or two guys there every time he tried to drive. You have to have more options and we’re restricted now."

(On the second half) "We only shot 45 percent in the second half. I thought we were really aggressive and assertive in the first half, different guys. In the second half they played very good defense and they stepped it up knowing that we were having a pretty good shooting game. We were well above 50 percent at halftime. When they stepped it up they stop your first bit of movement, then it becomes a one-on-one game and that puts them in a rebounding position and we hit a bit of a lull in the third quarter with only 15 points."

(On defending the Pick'n'Roll with Dirk) "It's tough because he sets the screen. I thought Dirk was very unselfish, he still takes 20 shots but he sets the screen and if you help, he pops for a jump shot and if you don't, then the guy is turning the corner and getting into the lane. Late in the game we tried to switch it, move, see if we could trap it a couple of times. We went under, we tried to switch, but at that point, the floodgates had opened." 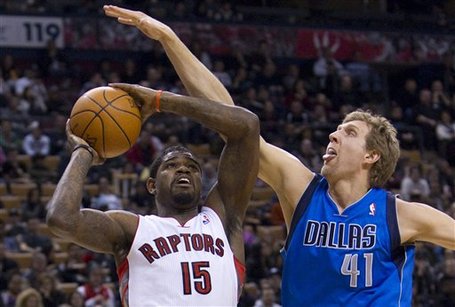 "Close your eyes, show your tongue, hide yo kids, hide yo wife...."

(On the first half) "We had energy, we had the game. The first half we did great, the game was going our way. We just came up short - it was almost like we gave the game away. It definitely is frustrating but all you can do is get better and learn from your mistakes."

(On the Mavs O) "Their offense, we couldn't stop that one play where they had Dirk in the corner and they set their pick and roll on the big men. We had trouble guarding that play, so that really hurt us." 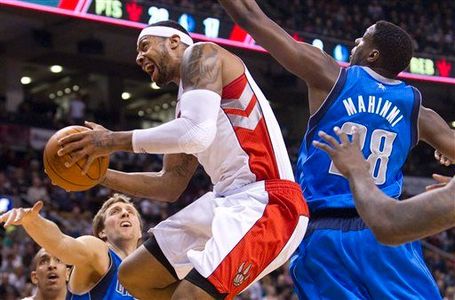 (On why trying not to lose was the reason for the Loss) "We came out aggressive, attacking the rim, shooting the balls we wanted to shoot. The second half it was a little different from the get-back perspective on defense, a little passive and just trying not to lose instead of playing to win." 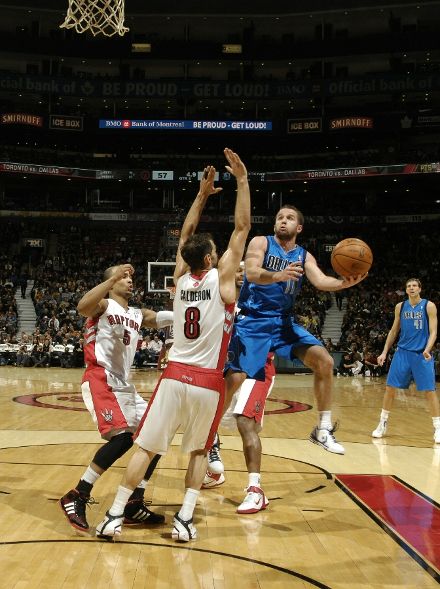 "You may be the NBA STAR, but I defend and get paid like one!111elf"

(On guarding the Mavs) "It was hard. They’ve got too many shooters out there so at the end of the day you’ve got to leave them something. They were just picking us apart."

(On the Raps) "Tonight we saw again that we can compete against everybody. I know we’re young and we make some mistakes sometimes and maybe that’s why they beat us tonight. They played better in the second half as a veteran team."

As the Mavericks entered the tunnel to head to the locker room, a frustrated Nowitzki grabbed a black curtain at the entrance and yanked it angrily. We can only assume that his frustration was voiced to the rest of the team.

The Raptors actually jumped out to a huge lead early, 22 to 3 at one point, but the Mavericks showed why they are one of the league's best, chipping away at that lead until they were down only seven at the half to the Raps. After some halftime adjustments, the Mavs then came out guns blazing, outscoring the Dinos 25 to 15 in the third quarter, and 39 to 24 in the final frame as this one was over with about five minutes to go.

With their 44th loss of the season, the HQ looks beyond just last night's loss to the Dallas Mavericks and at the Raptors' point guard position and its future...

Raptors Republic Roll Call | And the Winner of the best tank job goes to...

Shawn Marion is not what he used to be, and he had a good game but the guy who did a lot of the damage was JJ Barea. The dimunitive guard faced little resistance getting into the paint and making guys like Ian Mahinmi look good enough that guys like me are having to actually type his name out.

Haywood bricked none of NIL from the line, because he had a DNP-Moody. Celebration for our third-best Center, Beaches! [nsfw] 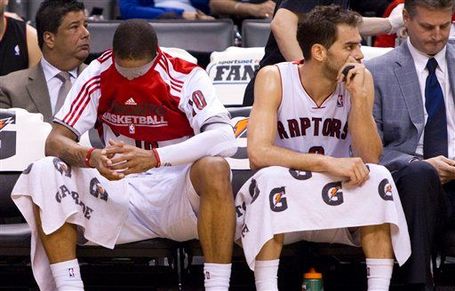 Disclaimer: If you couldn't tell by now, all italic sentences are made up thoughts, not actual quotes. Also, breaking news, the Mavs remembered to tie their shoelaces backwards and are subsequently on a 6 Game Winning streak. It's gotta be the shoes.

The Mavs (beat/lost to) [the Toronto Raptors]¹ tonight (thanks to/despite) Dirk’s Awesomeness. The (cloud in the silver lining/major culprit) once more as usual was the lack of support from his team-mates, with the exception of Tyson Chandler/Jason Kidd². Especially useless was Jason Terry/Deshawn Stevenson/Peja Stojakovic/Jose Barea/Shawn Marion/Brendan Haywood's Bench Production/Rodrigue Beaubois's first Half³ and it is (GUESS WHAT) THEY’RE ALMOST NOT ALL USELESS!