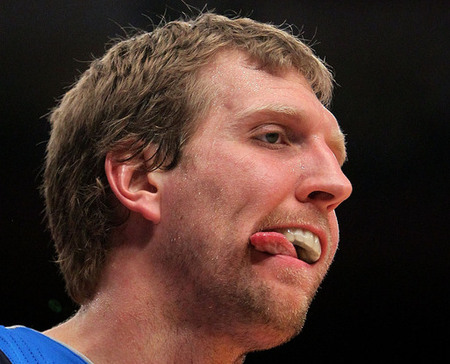 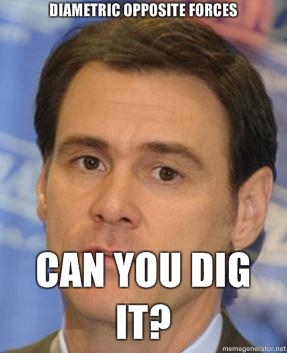 (On starting Barea in the 2nd half) "We changed things up lineup-wise and Barea made things happen for us offensively. That energized our defense and we were able to get on a run. That was big. And once we were able to string together some stops, we were able to build a lead."

(On Amar''''e) "First of all, you don’t stop that guy. You’ve got to hope he [Stoudemire] misses a lot of the time. He ripped us up in the first half and we did some things better in the second half. We had more help there and Tyson adjusted to some of the things he was doing. But look, he’s a great player and a legitimate MVP candidate. I mean, there’s no doubt about that. So, when he has a bad quarter, some of it is him just not getting the ball in the basket."

(On the Win) "We’re gradually building momentum here. And I’m not getting too carried away because there’s a long way to go. Games are gonna get harder before they get easier, but we’re making strides. And that’s what it’s about."

(On JJ) "JJ Barea has gotten better each year. The more he plays the point guard position, the better his recognition is in terms of running our team, setting other guys up, etc. He’s a natural scorer and we’re asking him to be both a scorer and a playmaker and be able to run the club. At times those things can be diametric opposite forces, but he’s doing a really good job of merging those two things and getting better all the time. I just love the dude."

(On Tyson Chandler) "He gives us length, he plays above the rim, he alters shots, and he’s a slender guy but he’s extremely tough, so he brings a dynamic physical aspect to our team that we didn’t have before. Offensively he’s a big part of our team because he generates possessions for us, he’s involved in our offense both as a midrange shooter and as a post-up guy and as a roller to the basket. He’s brought a lot of enthusiasm and energy."

(On Dirk’s proximity to 100% health and MVP status) "Well I don’t know if I know the exact number, but I sense that he’s building each game on the last, and that we’re headed the right direction with this. Talk about MVP candidates- if you look at what happened to us when he was out, look at his plus/minus, based on that, he should be the MVP. I mean he’s more valuable to our team than any other star is to theirs, and so his presence on the floor, and his healthy presence, is huge for us. We feel like we’re chipping away and he’s making strides there."

(On Dirk's Game Improvement) "There’s a few guys who have done it in history, but Dirk’s a unique guy. There’s nobody that has worked at developing his game more than he has in the history of this league. And I put him up against Larry Bird and all those guys that have the great work ethic and great reputations as hard workers. There’s a reason the ball goes in the basket. That’s ‘cause he’s great and he’s put in the time and the hours."

(On Peja staying at home) "Between now and then his workouts have got to continue to be going in the right direction in terms of the conditioning and the rehab on the knee, and so far it's been all very positive." 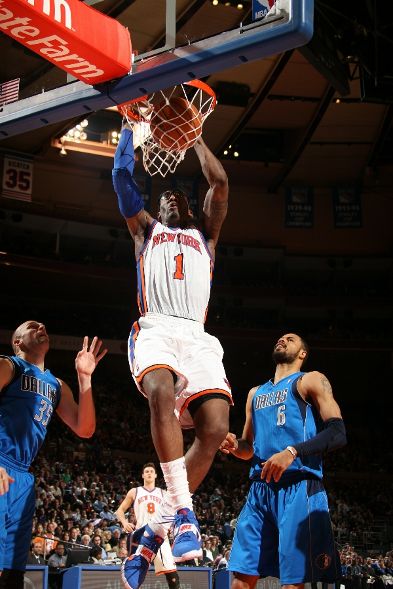 Not the 2nd half.

(On Amar''''e's first half vs second half) "I gave him way too many open looks in the first half. I kind of wanted to get a feel of how he wanted to come out, and he came out, he was hot, he knocked down his first couple jump shots. And then he kind of got in a rhythm."

(On the adjustment) "So, I came in the locker room and I told the guys, ‘Hey, you just tell me where you’re at on the floor. I’m going to get aggressive with him and I’m going to force him into traffic. Because of that, I think it made him hesitate a little bit and we were able to slow him down."

(On winning by Defense) "With the injuries, we got away from that. We started focusing too much on offense and how we can make up for Caron and Dirk being out. Not only could we not make up for the offense, but we stopped on the defensive end. Now that we got guys back healthy, we're starting to come back to our roots."

(On him being in consideration for an All-Star berth) “I feel like I’ve put myself into contention. Some guys are having career years. But if you look at the center position, I feel like I’m the best in the West. Of the centers that are playing in the West, I feel I’ve had the best year and the most impact.”

(On Boston next) "It’s definitely one that we feel we can get. We beat them at home, so we expect them to be up for us and the challenge. We’ve just got to go in there and play the same way we played the second half tonight. They want to prove a point that they’re the best team in the league and that’s what we want to be. They won a championship a couple of years ago and that’s what we’re shooting for. So, whenever we have the opportunity to face champions or ex-champions, we’ve got to take it as a measuring stick."

(On the offensive success) "I think if you look at the last couple of weeks, our winning streak, we had 5 or 6 guys in double figures every game, guys are shooting the ball well, sharing the ball, it’s been fun to play that way. But it’s really starting with our defense. In that losing streak, our defense looked pretty shaky at times and we corrected that again and we got a little pep in our step back."

(On the Defense) "I think our defense has been going back to where we were in November-December. I think if you look at our effort defensively in the second half, that's what won us the game."

(On reaching 22,000 points in his career) "Really? I didn’t even know that. It’s been a pretty sweet ride for me the last 13 years, but one thing is missing. We all know what we’re chasing, and that’s ultimately the championship. But I signed on for another four more years so hopefully one of these years I can reach my goal." 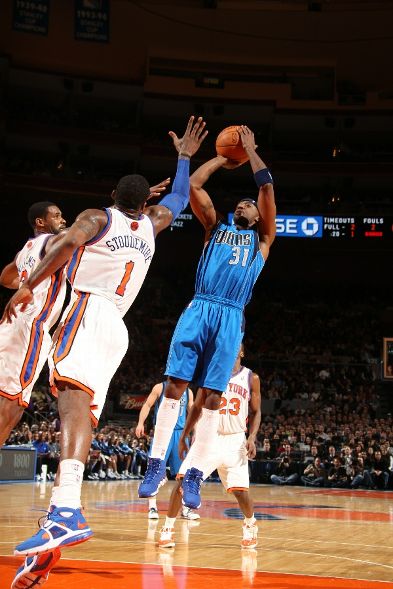 (Difference tonight?) "Great third quarter. We had a great performance tonight offensively. The shots were falling, the ball was moving and defensively we were able to get stops."

(On adjustments after halftime and some casual hyperbole) "Our thing was to limit the easy baskets. Galinari, early on in the game, got a rhythm to the basket, second half we kind of limited that. Stoudemire couldn’t find a rhythm. Tyson Chandler, again, having an all-star year defensively. I think he should be the defensive player of the year! He didn’t lock him up, but he did a great job on him, making it tough on his shots in the second half." 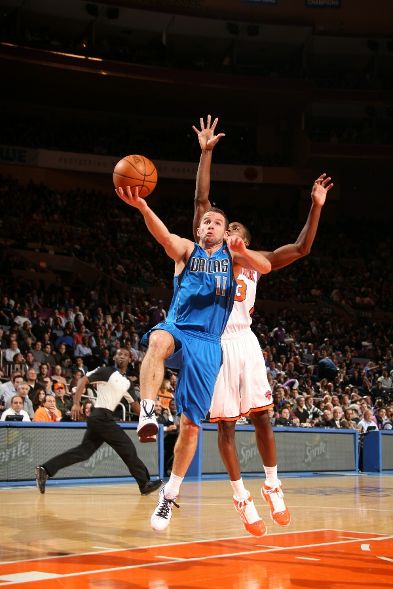 Bunch of Skywalkers over 'ere, eh?

(On the third quarter run) "That was big. We made a heck of a run and they couldn’t come back to return me my car keys."

(Do you need confidence to be agressive?) "The confidence is big. It’s important in this game but I’m glad I got great teammates, great coaches that got that confidence in me. I’m just staying aggressive." 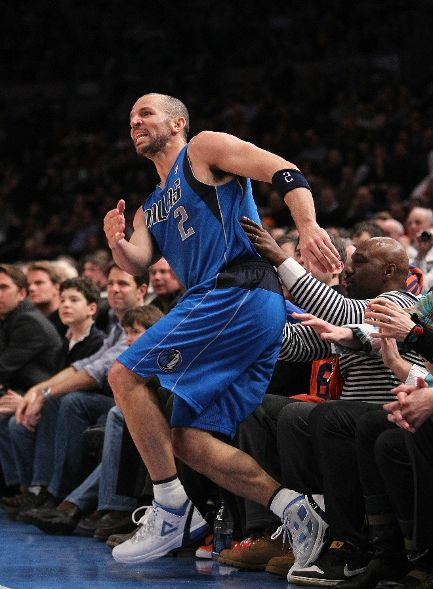 Jason Kidd gets ejected from the first row. He wasn't old enough to get a free seat yet.

(On why the Mavs are playing good again) "That’s easy. I think when 4-1 is out on the floor, just his presence, it doesn’t matter if he’s 50% or 100%, he draws so much attention and we got guys who are shooting the ball extremely well from behind the arc and it just opens up the whole court so when he’s on the floor, it helps." 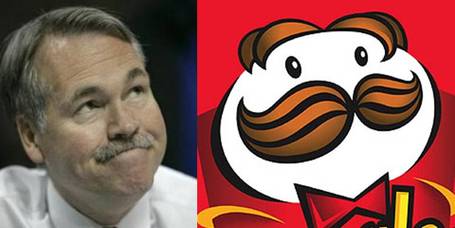 "That didn't taste so good."

(On the Game) "I thought we ran out of steam and ran out of good plays for whatever reason. We were playing well and we let [Jose] Barea get lose for a couple three’s and cut the lead to zero, and from then, Dirk’s Dirk. He’s going to do that. He’s a tough one to handle. But we didn’t make a lot of shots when we were running, and they played well. They’re a good team. They out ran us. They played hard."

(On Felton) "His hand is still bothering him, swollen up pretty good. But I just don't think it makes a difference. Obviously, it would be nice to hit all his shots, but we have to be a little bit more aggressive on the defensive end and get into people and want it a little bit more than them." 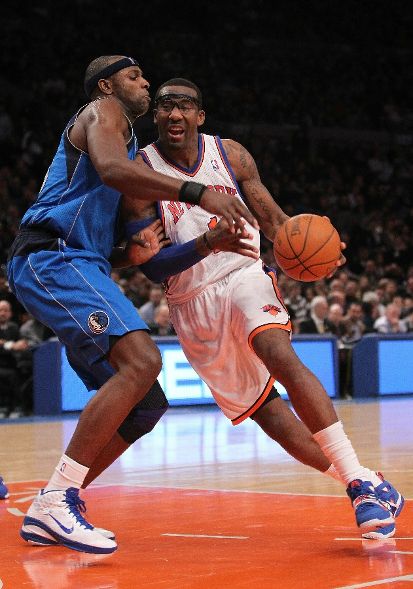 (On the Knicks' 2nd half) "The shots were good looks. There are just some nights like this where you miss your shots, but I think collectively in the second half, we just didn't come out with good energy."

(Did that happen before?) "I can't quite remember." 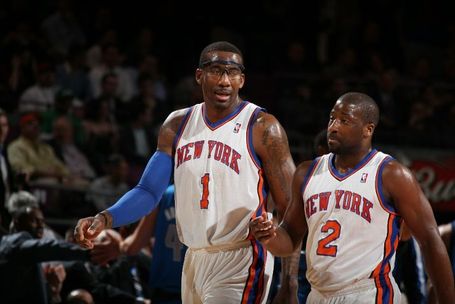 (On Injuries contributing to poor play) "I'm battling an injury but I'm out there on the court, so there's no excuse."

Just for all the users whose name starts with a b

PoastingandToasting We can haz Rebounds?

- Dirk Nowitzki (who KnickChick, one of our few and prized Toastettes, deemed a "beautiful assassin") kept cookin' soup even after a bit of a bump to his injured wheel (29 points on 16 shots), and the rest of the 'Ricks hit most of their jumpers and rebounded the rest. What makes a 54-34 glass margin even grislier is that Dallas is among the league's worst rebounding clubs, at 22nd in rebound rate and 29th in offensive rebound rate.

- Clyde during and after a deep Nowitzki three: "whhhhoooooOOOOAAHHH!".

Haywood bricked none of NIL from the line. Celebration for our third-best Center, Beaches!

Disclaimer: If you couldn't tell by now, all italic sentences are made up thoughts, not actual quotes. Also, breaking news, the Mavs tied their shoelaces backwards and are subsequently on a 6 Game Winning streak. Also also, thanks to Lisa for some a lot quotes. That makes stealing providing them that much easier.

The Mavs (beat/lost to) [the New York Knicks ]¹ tonight (thanks to/despite) Dirk’s Awesomeness. The (cloud in the silver lining/major culprit) once more as usual was the lack of support from his team-mates, with the exception of Tyson Chandler/Jason Kidd². Especially useless was Jason Terry//Deshawn Stevenson/Jose Barea/Shawn Marion/Brendan Haywood³ and it is (GUESS WHAT) THEY’RE ALMOST NOT ALL USELESS!