Dallas is (so far) the only team to sweep the Season Series with Miami and/or Boston. Does that mean the Mavs might get out of the first round in the West? 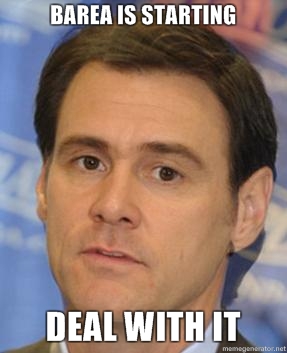 (On the Finish) "It came down to their game against our game and it was really, really close. I was proud of the way the guys hung in. We got down and things could have gone the other way. But we were in virtually the same situation with them at our place and guys remembered that and talked about it in the huddle.''

(On the last play) "We had a primary option, and we knew that they would probably react to Jet [Terry], and that Jet was going to have to make a play. And if it got into a scramble situation, those situations generally have been pretty good for us, both offensively and defensively. Kidd made a tremendous play; he was able to show the shot, [Allen] ran by, then Kidd was able to get away with a step his foot set and make the shot. Just a phenomenal play."

(On the Game) "A lot of back and forth. Again, I love the way our guys hung in and battled."

(On getting back on track) "It's starting to feel like it did a month ago. We're unselfish and we move it good. We have to or we won't win games." 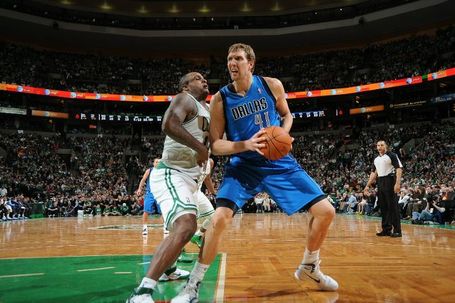 (On winning) "Even in the fourth quarter they made that run, but we kept executing. Trix [Marion] had two big layups there. They went up six, but we kept making the extra pass. We're tough to guard if we defend, get rebounds, run, keep the ball hopping. That's a fun way to play."

(On the Gamewinner) "The play was all over the place. I was just lucky to get the ball out to him. The pump fake is one of the toughest shots in basketball. That he made that shot is amazing."

(On the Win) "Definitely a big win to me. The Celtics, if they’re healthy, they’re definitely one of the best teams in the league. We did get a little lucky in there, but that’s what you need to beat a good team every once in awhile."

(On Tyson being snubbed for the ASG) "He’s our MVP so far, so I’m really disappointed for him. Every year there are some guys who are deserving. Tyson was deserving." 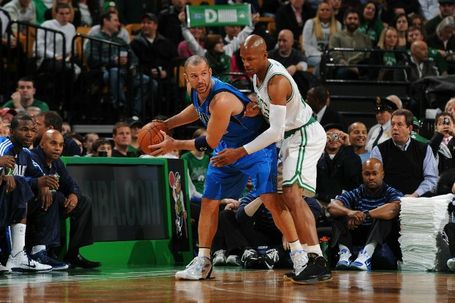 (On the Game) "It was just two good teams playing and you just hope that you can find a way to win on the road."

(On being open for Threes) "You're not a shooter, so they're going to give you the shot."

(On his Three) "I had thoughts when I showed the ball of maybe jumping into Ray, but he took a little wide angle, so I couldn’t get to him. Dirk was nice enough and he trusted his teammates down the stretch to make a play. And I got lucky and it went in. I had one from JET that I missed earlier, and that was the one that I thought I just rushed it. So, I said, ‘If I have this opportunity, just take your time. You’re not a shooter, so they’re gonna give you the shot.’ Then Ray jumped out at me, and if he didn’t jump out at me, I was gonna shoot it anyway, because I just felt the next shot I was gonna take was gonna go in."

(On Clutch play) "We've got a lot of guys in here that put the ball in the basket." 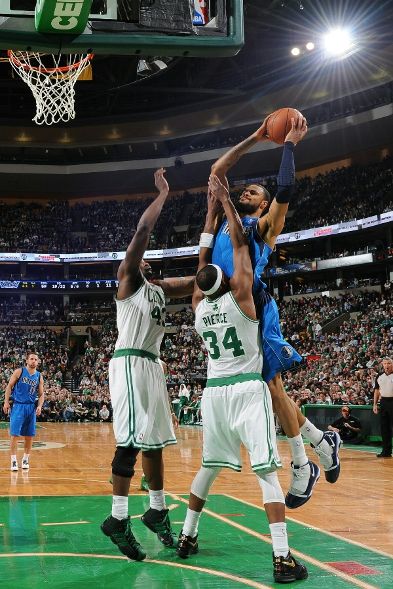 "Enough hops to slam that home?"

(On the Game) "The thing that I liked today is, unlike previous games, like Chicago and other games, we allowed teams to knock us out of our rhythm. We stuck to it, stuck to our game plan, executed and was able to get the win."

(On the clutch options) "We got so many players who have been in that moment on this team. Jet's hit game-winners, Dirk has. And Jason Kidd."

(On where the Mavs are) "At this point we've been beaten the top of the top. The thing we have to do is continue to be consistent. I love the way we're playing right now. We're playing great basketball at both ends of the floor."

(On the Difference) "The defense, by far was the difference. That's what they're known for. And that's what they pride themselves on. For us to get stop after stop - we shot some airballs - but we were stopping them.''

(On the Coaches note selecting him for the ASG) "They go for the glamour stats. But that’s OK. I got my checklist now." 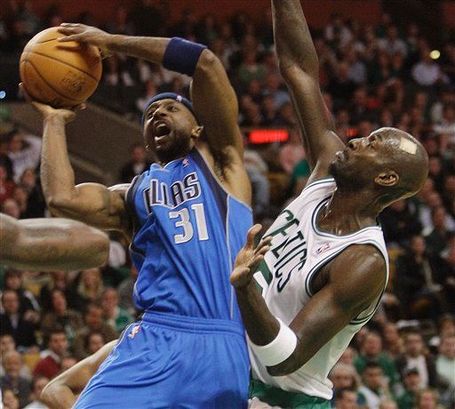 "Aaaaah, its KG, the Little-Guard Bogeyman!"

(Before the gamewinning play) "Doc Rivers looked at me, I looked at him and he kind of just shook his head and said, ‘It’s coming to you. And I was like, ‘You know it’s coming.’"

(On Kidd's Gamewinner) "The pass Dirk made at the end to J-Kidd, it's all about trust. When you trust your teammates like that, good things happen. The bigger thing about it was there was a stretch where we missed three consecutive shots and got four consecutive stops."

(On closing) "It sure didn't look like it, because we had three or four airballs. But when it came down to winning time, we got it done. Garnett jumped out on me on the switch and Dirk kind of fumbled the ball, but when he got it out to J-Kidd, there was no doubt once he let it go.'' 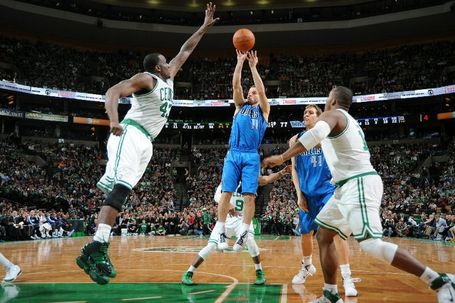 "Jumping subjects may appear smaller than they are."

(On starting and scoring nine 1st Quarter Points) "That’s why he put me in there, to get us going early in the game. I've got to stay aggressive. Every time I go in I’m going tostay aggressive and see what happens."

(On returning to Boston) "I had four good years here of my life, learned a lot. I visited Northeastern College on Thursday. It's always good to come back."

(On fouling Garnet) "The foul was nothing, just part of the game. It was a good, hard foul and he just got really upset. He said a lot of stuff and I couldn’t believe he got so mad about it."

(On Garnett's reputation for going after smaller players) "Yeah, I've heard that. Garnett likes to pick on little guys, I think. It’s all fun, though, it’s part of the game.  We got a free throw out of it at least." 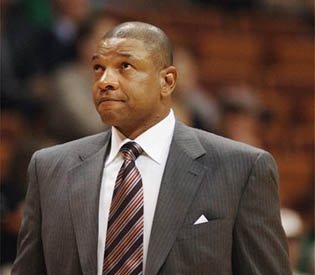 (On Boston's attempted game-tying play with 2.5 seconds remaining in the game) "Well we had had two options, actually; you know we had a timeout too. And I told Rajon Rondo that the alley-oop part of it – if it was wide open, you throw it. But if we told him, if Kevin Garnett is close to wide open, Ray [Allen] would probably be the guy open. And he probably was open, actually. I think – I haven’t seen it yet – but by my vision, it looked like Jason Terry sucked in with Kevin, which means nobody was guarding Ray. But honestly, Garnett was open; the pass was just off the mark." 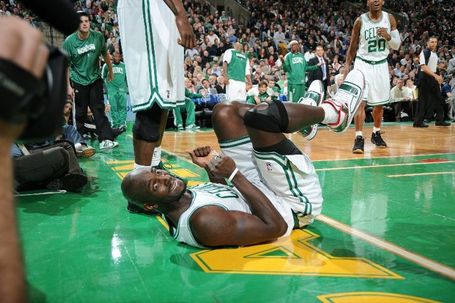 (On the Loss) "When it came down to it, we didn't make the shots that we usually make."

(On Kidd) "He's put teams on his back. He's carried the load and the responsibility for a long time. He's no shag of a player, nothing like that. He's a respected player. I think everybody in our organization and our locker room respects this dude." 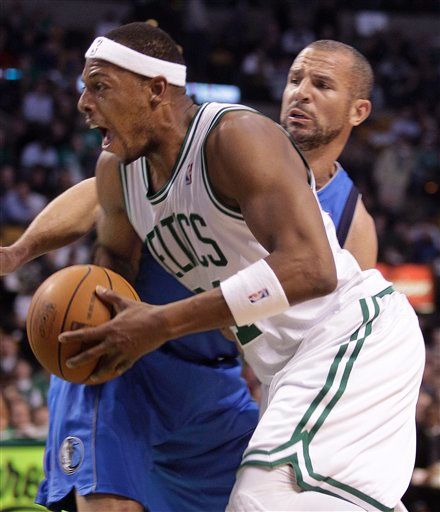 The Game of Basketball has to be very painful for a Pierce.

(What up?) "I thought we got shots that we wanted actually, we just missed them. Ray’s wide open right there, maybe the shot was fast, but that’s Ray Allen. Rondo, Kevin – they had good looks. It was just one of those offensive games. It just came down to whoever had the ball last." 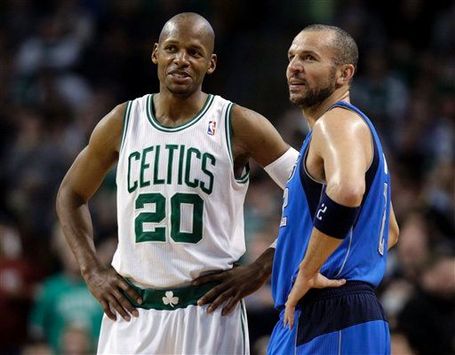 (On the Bench) "If I look at this game and the last game we played against them, it’s the guys that come off the bench that you’ve got to limit their production. I think they have a few guys that had an impact on the game in both games. If we could match bench production, our bench has to be better than theirs."

(On Kidd, the Threepointshooter) "He's proven over his career that he can knock the 3-ball down. For most of his career, he hasn't been given the credit for being able to shoot because he's been able to do so many other things well. He's always had the stigma that he was flashy, but he was very effective."

(On Kidd's pumpfake) "I was actually afraid that, when I jumped, he was going to jump into me, and I was going to foul him. Which he could have, but I was trying to run him off the 3, and he just stayed there. That was a tough shot, you know, when I think about it, still being able to gather yourself to shoot that tough shot."

(On closing in on Reggie Miller's 3PTFGM Record) "There's a sense of me getting sidetracked if you worry about it because you feel like you've got to shoot it from beyond the arc. I don't want to press. I don't want to step outside of what we're trying to do here." 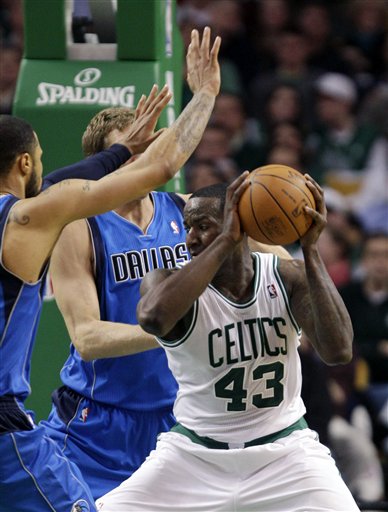 (On playing 33 Minutes) "I was just out there trying as hard as I could. I gave my 100 percent. It was all I could do. I'm a little mad at a couple turnovers I had [there were four of them, but one was the aforementioned offensive foul]. I'm just happy to be out there playing."

Celticslife Comments from the other Side Mavs 2/4

Kevin garnett is such a ginobili

This was a fantastic game...aside from the outcome. Felt like a playoff game, the crowd was with it, the players were focused and intense, and both teams brought their A game.

CelticsHub You've got to be Kiddin me

[...]the C’s lose a very winnable game tonight after the Mavs come back in the fourth quarter with Jason Kidd hitting the go ahead three-pointer with just 2.5 seconds remaining. One ill-advised alley-oop pass later and the C’s are swept by Dallas during the season series in two hard fought games.

Just lost? Impossible. Clearly an oversimplification.[...]There had to be something more, no?[...]Yes, sometimes basketball is like that. Two of the better teams in the NBA put together 48 minutes of entertaining, seesaw basketball. And with 2.5 seconds remaining, Jason Kidd hit the 3-pointer that Ray Allen had missed a short time before with a chance to essentially end the game. It's as simple as that. How many times have we been told that it's a "make or miss league?" Make your shots, you win; miss your shots, you lose. On Friday, the Celtics missed and they lost.

Haywood bricked none of NIL from the line. Celebration for our third-best Center, Beaches!

Disclaimer: If you couldn't tell by now, all italic sentences are made up thoughts, not actual quotes. Also, breaking news, the Mavs tied their shoelaces backwards and are subsequently on a 7 Game Winning streak. Sometimes it's that easy.

The Mavs (beat/lost to) [the Boston Celtics ]¹ tonight (thanks to/despite) Dirk’s Awesomeness. The (cloud in the silver lining/major culprit) once more as usual was the lack of support from his team-mates, with the exception of Tyson Chandler/Jason Kidd². Especially useless  was Jason Terry/Deshawn Stevenson/Jose Barea/Shawn Marion/Brendan Haywood³ and it is (GUESS WHAT) THEY’RE ALMOST NOT ALL USELESS!

² Only one of them, mind you. Chandler failed to get to the Line, so...