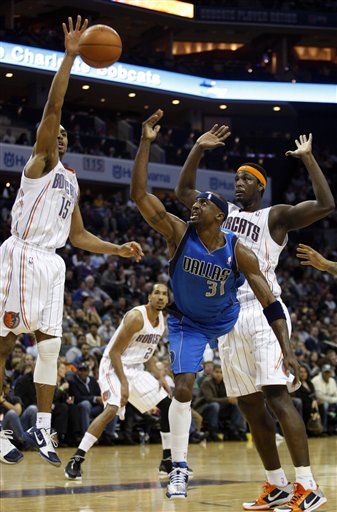 "NO, not a black swan party, a BLOCK party!"

The Dallas Mavericks are not blocking 14 shots very often. Especially not on the Second Night of a Back-to-Back. Just sayin'. Also, time to cash in or out, mavslvr44.

(On Chandler) "The presence around the basket is so important to us. Tyson is a slender guy but he has a real physical presence on the floor. He likes contact, he doesn't shy away. His fight rubs off on the rest of us."

(On the fourth Quarter) "We had some trying stretches tonight. But when it counted, we were able to hold it together."

(On Stephen Jackson) "Whenever you play against Jackson, he’s always gonna be an emphasis of your defensive game plan, because he’s explosive and he’s had huge games on us. So, we have a lot of respect for him until the trade deadline." 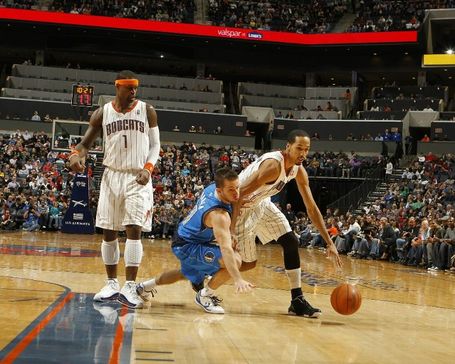 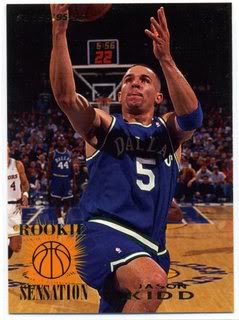 "No pictures of me today, so let's go retro!"

(On the Game) "We got off to a good start, and then the last couple of games the third quarters have been big for us. Tonight, we came out in the third quarter and got the lead up. We made shots, we got stops, and from there we just tried to run the clock out."

(On Tyson's return to Charlotte) "Chandler was all business like he always is. There wasn’t anything that he said he wanted to get this win. This was a back-to-back, and so he was focused on trying to help us get off to a good start." 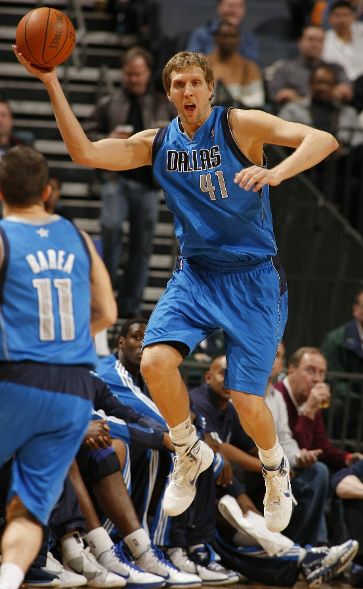 "Crap, Is there really no other passing option?"

(On the Game) "We came out and played really well there in the first half. Moved the ball, got good shots and were solid defensively."

(On the Key) "The key for us was holding them around 40 percent shooting all night long. Our defense was solid, mixing in zone and mixing in man-to-man. I definitely thought it was a good defensive effort."

(On closing the Roadtrip with the Win) "It was actually a ballgame in the fourth and we had to work harder than we wanted to, but it’s definitely a good way to close the road trip out." 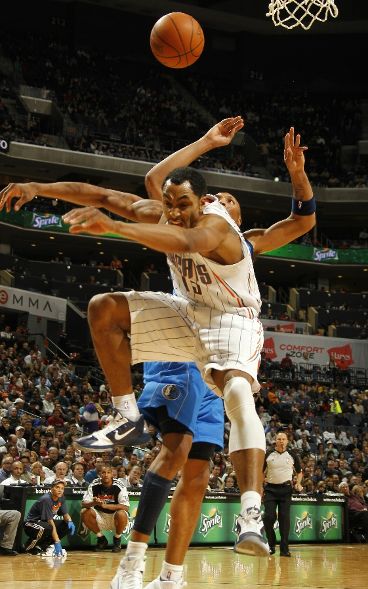 (On sweeping the Road Trip) "This road trip just shows the character of this team and how much we were able to go out here and just take it. Take what we wanted."

(On the Cavs next) "It’s a fight every night, and this is the NBA. Every team is a different challenge for us, and I think we’ve just got to prepare ourselves the best way we can to match up with these guys. Just go out there and have fun doing it. And just keep hitting that century mark. It seems like every time we hit that century mark, everything else takes care of itself." 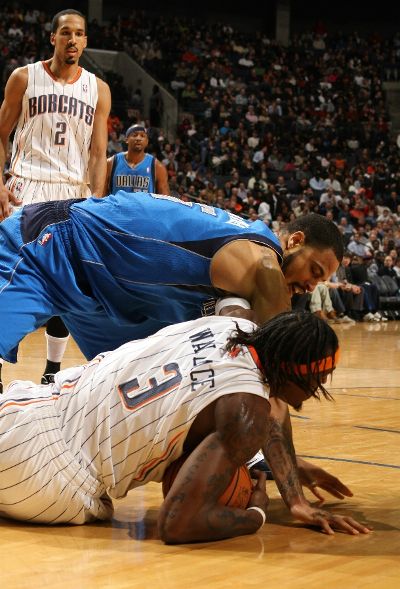 (On his health) "It's night and day the way I feel. Last year I was fresh off my surgery that summer. Now it's been a year and I just feel like a different person."

(On the Win) "It was a game that we definitely wanted to get coming off of last night’s game. Last night was a big game and we didn’t want to have a letdown tonight."

(On the Gameplan) "They depend on Jax’s scoring, and not only his scoring but his ability to find guys. I think we made it tough on him. We threw a couple of guys at him, stayed in the passing lanes and because of that, their offense was a little stagnant."

(On his time with Charlotte) "I wasn't here long enough to have any animosity or anything like that. They were always good to me here. I had a lot of good teammates and it was a good organization. It was just one of those things. I was injured. The team was going in a different direction. I think it was best for both sides. I didn't necessarily ask for a trade. But once I heard about the rumors, then I wanted to kind of be in the loop. By the end of the season, I was kind of confident that I was going to be moved.''

(On his time with the Mavs) "This is a great situation. I love my teammates and the entire organization. It's been great coming here. It's been definitely a blessing. But it is a business. There's always a business side to it. We'll have to see that plays out. I'm the worst person to ask. I've heard the talk before. I've been told, we're going to keep you here, you're the future, you're one of our key pieces. And then you get traded a half-year later. There are certain GMs and owners that you can trust and there's others that you can't. And that's in any business. It's no different in doing this or working a common job. It's all the same.'' 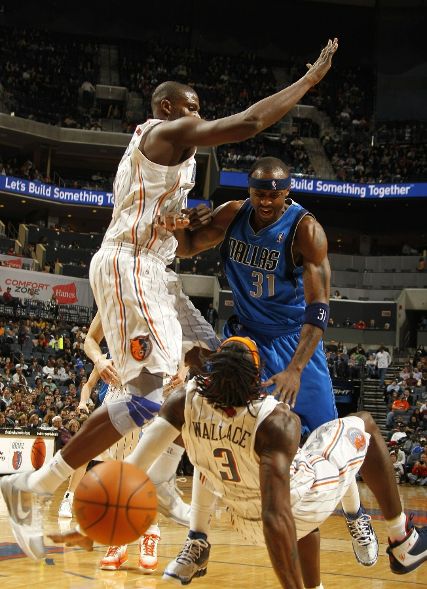 Stuck in Traffic on his way to the Superbowl Game.

(On the third quarter) "That was key, because what it did was gave us enough cushion to where if they did turn it on, they would have to exert so much energy that they pretty much wouldn’t have anything left."

(On the End) "As you see, towards the end, they tried to turn it on at the end and they just didn’t have enough juice."

(On the Road Trip) "Our goal on this road trip was to win all three, and we were very locked in. We were focused. And I think this group is a veteran group that when it sets goals for itself, we’re gonna go attack it head-on."

(On the Mavs) "We’re just having fun, just doing what we do. Back to how we came out of training camp, that same kind of feeling, that same type of edginess about us. That competitive fire is there. But hey, it’s a long season. And this is just another stretch where we’ve been able to get things accomplished, especially offensively the way we’re moving the ball." 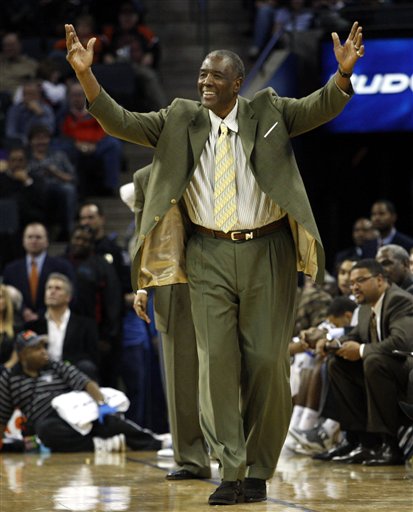 "Alright then i quit. God i give up, Call it evil that Mavs do, Lord forgive me for what my Team do...."

(On the Game) "I thought we fought as hard as we could. The Mavericks are a pretty good team . They’ve won seven in a row and beat Boston in Boston the other night. They're a team that's on a roll. We came within six points, but Jason Terry and Dirk Nowitzki were just on fire. They’re two go-to guys. They went to them and they prevailed, but I like how our guys didn’t give up. We kept fighting and that’s a plus for us."

(On Jackson's Techs) "He's been acting that way for quite some time now. That's up to him to evaluate himself." 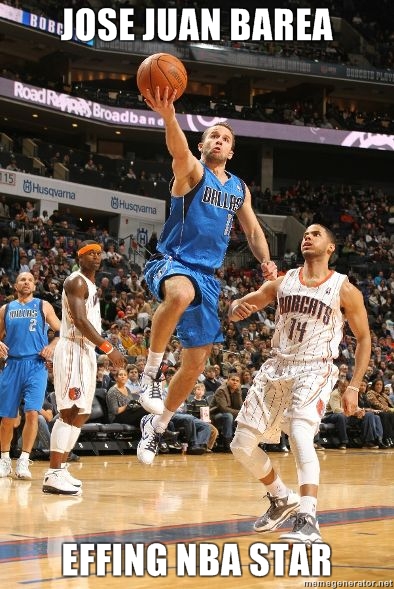 (Why you lost) "They were hitting shots. We didn’t communicate on a couple of plays and they got some easy baskets and that kind of got them going." 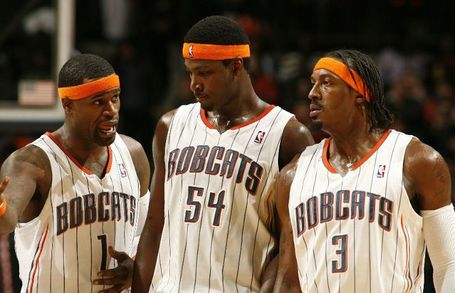 "Kwame, every time you take a shot, a kitten dies. Can you really live with that thought?"

(On the Mavs) "Dirk Nowitzki is a great player, one of the best in the league. He made shots, and Jason Terry got off. We’re playing hard, we’re just not getting the job done. We’ve just got to come in tomorrow, refocus and be ready Monday."

(On the Bobcats) "We just need to win. I don't know the X's and O's. I know we're playing hard, but I don't know. The answer to that could get me fined."

Haywood bricked one of TWO from the line. Celebration for our third-best Center, Beaches!

Disclaimer: If you couldn't tell by now, all italic sentences are made up thoughts, not actual quotes. Also, breaking news, the Mavs tied their shoelaces backwards and are subsequently on a 8 Game Winning streak. Sometimes, it's that easy.

The Mavs (beat/lost to) [the Charlotte Bobcats]¹ tonight (thanks to/despite) Dirk’s Awesomeness. The (cloud in the silver lining/major culprit) once more as usual was the lack of support from his team-mates, with the exception of Tyson Chandler/Jason Kidd². Especially useless  was Jason Terry/Deshawn Stevenson/Jose Barea/Shawn Marion/Brendan Haywood³ and it is (GUESS WHAT) THEY’RE ALMOST NOT ALL USELESS!

² Only one of them, mind you. Chandler is not supposed to miss Freethrows, so...